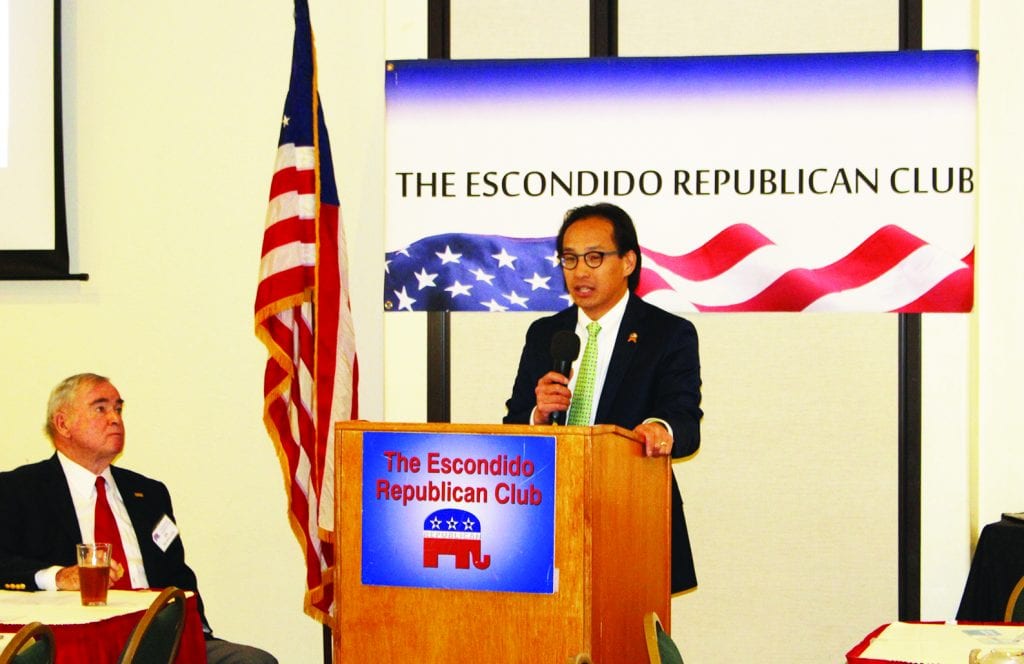 Registrar of Voters Michael Vu speaking before the Escondido Republican Club on Monday.

San Diego County has reached the point where a substantial majority of the voters are voting by mail, compared to those showing up at the polls to cast their ballots. Currently nearly two-thirds of the voters cast ballots by mail. That percentage continues to rise.
Michael Vu, San Diego Registrar of Voters, was the guest speaker at Monday’s The Escondido Republican Club (TERC) which meets the third Monday of the month at Cocina Del Charro.
The Registrar started off by talking about the fact that they need 8,000 poll workers each election day, “which makes us one of the largest employers in the county for one day,” he said. He noted that the election is exactly two weeks out.
He talked about how his family came to the United States or the heels of the conquest of South Vietnam in 1975. “Our first stop was Camp Pendleton,” he said. He was born in 1976 and raised in Utah and has learned the profession of tallying elections over the course of 23 years.
Today he and his family, which includes his wife and four boys, live in Carlsbad.
One thing Vu has learned over the years is “no two elections are alike.”
The 2016 election broke several records in San Diego County. It was, for example, the highest number of mail ballots mailed out. There were 2.71 million sample ballots mailed out. The main reason for that was that 2016 was the year of the highest number of propositions, 52, in the history of the state and the county.
“It was a huge election for us,” said Vu. “It was like conducting two presidential elections at once.” It cost $20.4 million to conduct the 2018 election, which was also the highest amount ever.
As mentioned before, the numbers are trending heavily toward more and more people voting by mail, a process that used to be called “absentee,” and for which voters originally had to supply a legitimate reason. Now anyone can vote by mail, and in some cases and for some communities, they have no choice.
In the 2016 election 856,937 ballots were cast by mail, or about 65% of the total. Some counties in California have switched over entirely to vote by mail in a pilot program, including Napa, Sacramento and Nevada counties.
Asked why so many people vote by mail, Vu said, “People are just plain busy,” he said.
During that election there were 261 distinct types of ballot, reflecting the fact that someone might, for instance, be part of one congressional district, in a particular assembly district, and, perhaps, also be part of a water district division and a school district. The configurations are not endless, but there are quite a few of them—and each configuration requires a separate printing.
The Registrar’s office allows anyone in any jurisdiction to come to the headquarters in San Diego and vote in the two weeks leading up to the election. It is also expanding the number of places in the county where voters can drop off their completed ballots if they don’t want to put them in the mailbox for some reason. Most of these locations are community libraries. The number has increased from 25 to 42.
The Registrar conducts elections in four languages (besides English,) including Spanish, Filipino, Vietnamese and Chinese.
As they approach the June primary there are 1.67 million registered voters, a number that Vu expects will expand significantly by the General Election in November.
After his talk Vu took some questions from the audience. One question was how many ballots are sent to Mexico?
“Frankly, not very many,” said Vu, who explained that the number of ballots sent to expatriates and members of the military was less than 10,000.
For several years there was a lot of talk about computerized voting. Vu says there isn’t much of a push for that these days, largely because of fears of hacking a fully computerized system. There IS one computer at each polling place, however, to assist voters who need assistance in casting a ballot and can’t do it the normal way.
As for the chances of voting online every becoming fashionable, Vu said, “It’s a matter of public will. I just don’t see us getting there.”
Another of the Registrar’s jobs is checking the names on petitions that have been turned in to make sure that signatories actually exist and live at the addresses attributed to them. “I could be anyone signing the petition,” Vu explained as the reason for being so painstaking about this process. It goes without saying that when they find a questionable signature on a petition that it is tossed out.
Besides its other remarkable facts, San Diego has one special reason to be proud: it has the highest level of voter participation in Southern California. Two years ago, 81.5% of registered San Diego voters participated in the election, compared to 80.7% for Orange County, 75.8% for San Bernardino County, 75.5% for Riverside County and 57.5% for Los Angeles County.