County school board candidates discuss their visions for District 4 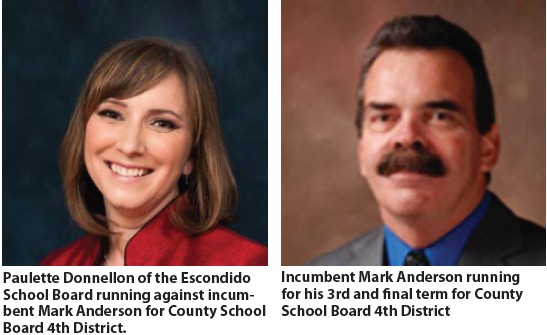 The local election cycle has been overshadowed by the presidential campaign. In North County one local race that hasn’t received a lot press coverage is the San Diego County’s District 4 school board race between incumbent Mark Anderson and Escon­dido Union School District Board of Education trustee Paulette Donnellon. The Times-Advocate sat down with both candidates to talk about their vi­sion for District 4.

Incumbent Anderson first won in 2008 and won reelection in 2012. He is running for his third and final term on the San Diego County Board of Educa­tion. Anderson has lived in Vista with his family since 1966 when moved to San Diego as a kid as his father was a career Marine. He graduated Vista High School and went to Palomar Community College, and finally to San Diego State University where he graduated with a BA in Social Work.

Anderson says that since college he has “primarily worked for non-prof­its” and “community service organi­zations.” Anderson said “ I reached a point where I wanted to do a little more with my skill set and went back to graduate school.” and “received a Masters in Public Health.”

When Anderson is not busy working on the board he is a part-time profes­sor for the San Diego Community Col­lege District teaching college kids. He is also an independent contractor and consultant to businesses. “ I enjoy the diversity of the work I get to do in re­gards to health care and teaching.”

Asked to compare the work he does with teaching college kids health and overseeing K-12 students in North County, he said that in regard to K-12 “I needed to learn a whole new language of K-12 education and I am still learning it.”

He adds, “There is still a lot of issues and things not in conflict but things I have to keep attentive to.” These in­clude, “ A-G requirements that we talk about for preparing a student for col­lege and career readiness through Ju­nior and Senior High School, the Com­mon Core issues” as well as preparing students for new courses that are being added in college. Other issues include students with special needs or disabili­ties and ensuring that students who aren’t competent in the English lan­guage are being schooled in it.

The Common Core Educational Standards are controversial nation­ally. I asked Anderson how California with its $778 billion debt (according to public policy records from fiscal year 2014) and education taking 28.8% of the budget is supposed to pay over $1 billion a year for such a program?

Asked how much is too much; An­derson said: “That’s a question you re­ally have to ask the people up in Sac­ramento because I can’t tell you that. I do not have that fiduciary responsibil­ity of looking at the budget and say­ing what is more important. You know putting money away for a rainy day fund according to the Governor, put­ting more money into schools, putting money into to helping the people who are more physically challenged, put­ting more money into our infrastruc­ture, roads and bridges.”

I asked Anderson whether or not there was too much time for testing and not enough time for teaching in the classroom. He answered, “We at the county level have recently devel­oped a long overdue kind of commit­tee of teachers and management or manager staff to come together to ad­dress something like that [testing].”

Anderson agrees that “. . .the com­munication between teachers and management at any level, whether it is the local school district, county or state, is very important and it’s going to keep us from developing into that mindset where its us or them.” Ander­son also says “ I think we have seen a good step forward in that between la­bor and management at a lot of levels.”

Addressing the issue of kids not wanting to come to school because of all the testing, Anderson said, “They are in fear of learning, because they are going to be tested”, and “That’s no way for a student to act or feel.” He added, “Education needs to be an enriching skill not something to be feared.” Anderson noted “that the County Office of Education has had a number of workshops on increas­ing the skills of teachers and “how to make learning fun.”

When it comes to Charter Schools; Anderson says he is for charter schools “unless the charter is being funded by public funding [tax payer dollars].” Editor’s note: All charter schools in California are publicly funded.

Anderson said, “that outside edu­cation parental involvement in their child’s life is number one.” He “en­courages the public to get involved in their community.” He also says “ to voice your concerns at the county school board meetings,” adding, “peo­ple won’t speak for you” and urged the public to “tell me and other board members what is on your mind no matter the issue.”

Paulette Donnellon has lived in San Diego County since 1976. She grew up in Escondido and attended Escondido public schools, the same schools as her two children later attended. Donnellon has 25 years’ experience working in education. Outside of her Escondido Union School District Board of Educa­tion duties she works for a educational non-profit tech company.

She also served in the U.S. Army for eight years and did a tour in Operation Desert Storm.

We asked similar questions of both candidates. Her response to how Cali­fornia citizens are supposed to pay over $1.6 billion a year for the Com­mon

Core Program was: “One size fits one right? Every child learns different­ly and therefore this (Common Core) was pushed down federally. There was no involvement from parents or com­munity when discussing Common Core and making the decision to going with Common Core in schools.”

Asked whether she supports Com­mon Core, Donnellon seemed taken off guard. After a moment she said, “There are some things with Com­mon Core that may work with other students: the ability to critically help them think about what their answers are going to be.” She continued, “I would talk a little positive about Com­mon Core but I don’t appreciate the government pushing it down on us be­cause— again like I said—those teach­ers should have the ability to teach those kids what they think is right for those kids.”

Asked whether the federal govern­ment or state of California should have a say in what kids are learning; she said, “I get it! Yeah, it’s frustrating. This is something the state, that the federal government mandated. Obvi­ously California adopted this from my knowledge without any inputs from counties, from school districts to say ‘Hey this is something that may work out for your kids’ or even any discus­sion on how this is going to come about.”

She added “There needs to be in­puts from the communities and their parents.” Donnellon believes “There should be a federal commission put to­gether to review parents’ and teachers’ concerns” about the Common Core program.

On testing Donnellon agrees with Anderson to an extent. “I would fully agree with him,” but “there is a need to have assessments” because teachers need to have a benchmark where their students are and how they are perform­ing. “but in my own school district I have witnessed it and I have talked to my leadership about this. Yeah, the Common Core test is wonderful—not. But you know what I am saying. The assessment portion of it, but the for­mative tests that happen throughout the year there is too much right now. I mean are kids are being tested when they first come on board. They’re be­ing tested again on the beginning of there second semester or the early win­ter timeframe, then again to follow up, then they got the summative test they have to take. So I agree there is way to much testing going on, it’s just too much.”

In a follow up question I asked her what her response is when a parent says a teacher says the leadership tells them how much homework to send home. Donnellon admitted, “It is di­rected” by the leadership. She added, “That’s very frustrating—it really is. You want to support that parent and at that point you have to look at alterna­tive methods. We have to talk to our legislators and say ‘Hey, this is not working in our schools. We’ve got children that are frustrated. We’ve got parents that are frustrated with these things that are going on.”

An issue parents constantly ask her about is SB 277, California’s Manda­tory Vaccination Bill that was passed in June 2015. Donnellon said, “It im­pedes the religious freedoms of the parents and the child.”

Anderson and Donnellon agree on the importance of technology in schools, student data, changing the school year from a seasonal schedule to a year around schedule with two to three week breaks throughout the year—and as mentioned above—pa­rental involvement outside of school in their children’s lives.

Primary Day is on June 7. Don’t for­get to vote. And keep reading the Es­condido Times-Advocate for the latest on Election 2016!