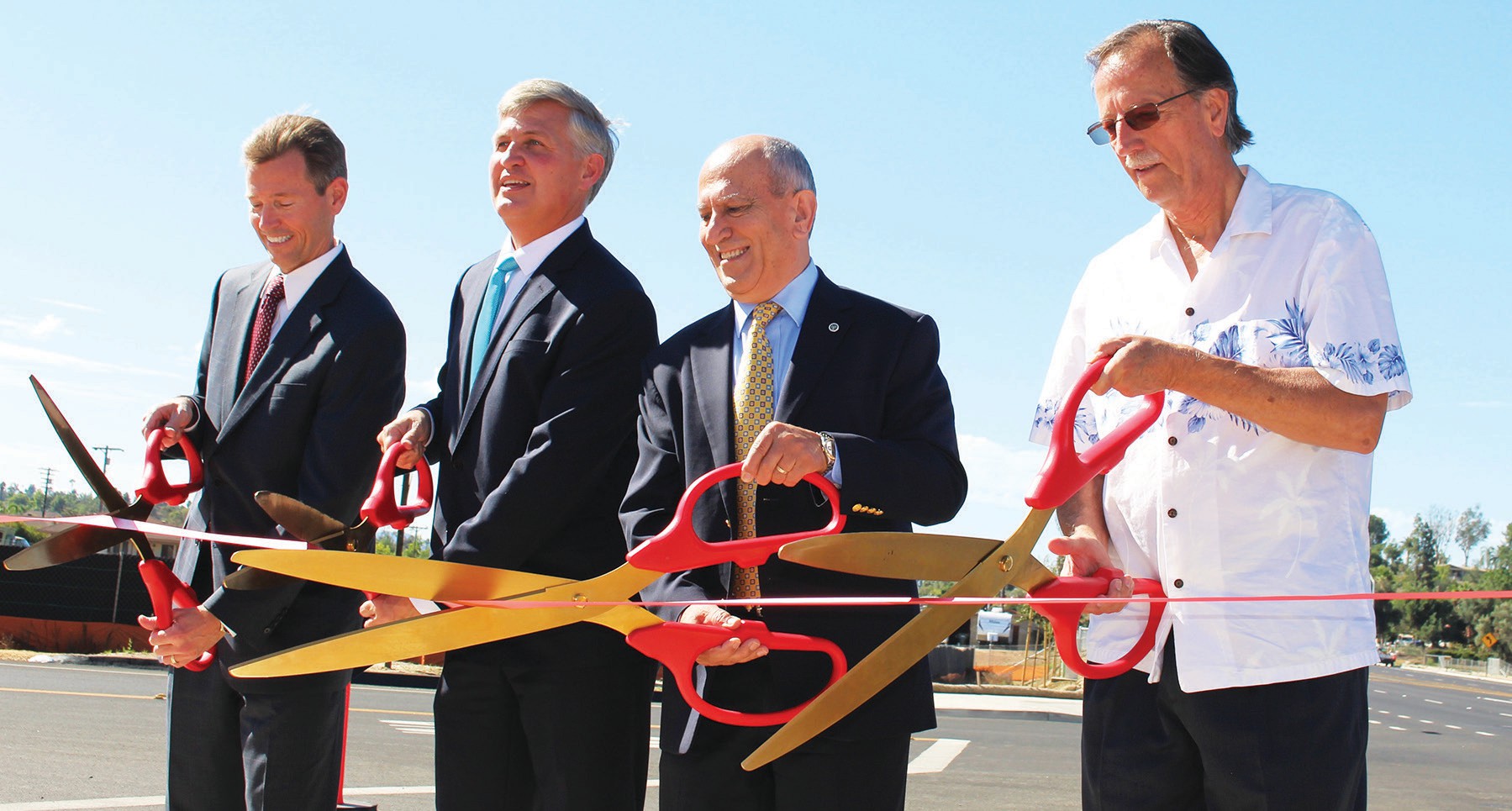 The $16 million construction project, which broke ground in 2014, widened the roadway to four lanes, adding bicycle lanes, sidewalks, and traffic signals. Electricity was moved underground, eliminating the use of all overhead utility lines. Additionally, the project includes drainage improvements that will relieve the new roadway of water runoff during heavy rainstorms.

Major funding was provided by TransNet, Proposition 1B bonds, and the City of Escondido. The contractor and designer was Southland Paving.

Crouton invited Roberts to speak. Roberts took credit for making the project happen. “When I became a county supervisor in 2013 this project was one of my top priorities and something I had heard being talked about for decades.” Roberts said the project would “reduce congestion and travel time for residents and commuters alike,” and reduce air pollution.

Roberts reminded his audience of the County’s Live Well San Diego Get Well Initiative, which provides “For Safe,Healthy and Thriving Neighborhoods.” He also encouraged “drivers to get out of their cars” and “to walk to their destination to lower congestion.”

Mayor Abed thanked, “Supervisor Roberts for his contributions to the project,” he then joked “ that he could now get to City Hall five minutes earlier” with the new improvements and that it would “save time and money” for drivers. The mayor quipped about how “Councilmen Gallo started lobbying for this project forty-two years earlier when he (Gallo) moved to Escondido with his family.” and joked that “Gallo should write a book on the subject.”

Before the mayor could continue however a large delivery truck passed right next to where the mayor was speaking, forcing him to stop a moment. He good humoredly said “maybe we have too much traffic right now but that’s OK,” an observation that earned him some laughs.

Abed then told the crowd about, “the remaining bottleneck at LR Green Elementary School,” near Westfield Shopping Mall next to I-15, which he said needs to be widened. He then looked at Supervisor Roberts and said: “Supervisor Roberts, please take some notes now,” which earned more chuckles from the crowd.

This reporter asked Supervisor Roberts about that remaining bottleneck section after the ceremony. He said, “The County writes up a new plan every year and will see what we [the board of supervisors] can do.” A follow up question asked Roberts if it would take another 42 years to complete the section. He said, “ I hope not,” but declined to speculate on a timetable.

The new road is now open to the public and goes from San Pasqual Valley Road to just north of Boyle Avenue. This reporter had a chance to drive down the road after leaving this event and he can say that what used to take 15 minutes to get through on an average day now takes 10 minutes. Happy Driving Everyone!