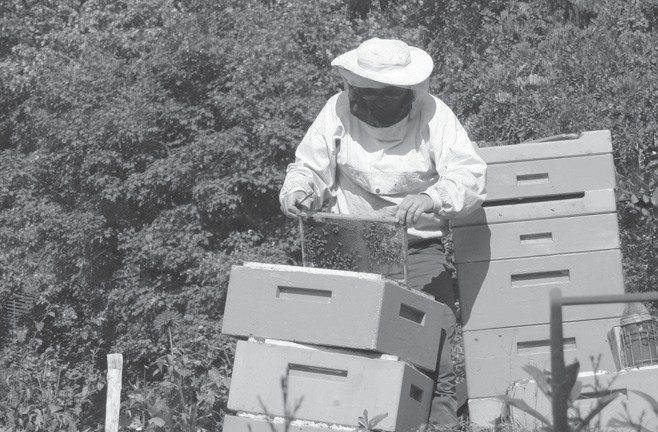 The county’s tiered beekeeping ordinance was approved October 14 and will take effect November 13.

A 5-0 San Diego County Board of Supervisors vote September 16 approved the introduction and first reading of the ordinance. The second reading and adoption was scheduled for September 30, but the action included appropriations to fund management programs and appropriations not made during the annual budget approval require four votes. Supervisor Greg Cox was in San Jose on September 30 for the League of California Cities conference and Supervisor Ron Roberts was in Washington, DC, so the approval was continued until October 14. A traffic delay kept Roberts from arriving before the October 14 vote was taken, but the other four supervisors provided the necessary votes for passage of both the ordinance and the appropriations.

“I think what we have before us is a real good ordinance,” said Supervisor Dianne Jacob.

“It’s about time we did this,” said county supervisor Bill Horn.

“The whole beekeeping industry is extremely important to us,” said Supervisor Dave Roberts. “I’m very supportive of this.”

The reduced setback requirements for beekeeping benefit not only hobbyists but also farmers whose crops are pollinated by bees.

“This is a big help to the agricultural industry,” Jacob said.

“If you don’t have a pollinator, which bees happen to be, you have no food,” Horn said.

The inclusion of best management practices is also expected to limit Africanized honey bee presence in the county. “We want to promote and enhance the good bees,” Jacob said.

“It’s a big step for us,” said San Diego Beekeeping Society president Mark Kukuchek, who lives in Bonita. “We’re real happy about that.”

The county’s previous ordinance required beekeepers to maintain their hives at least 100 feet from a public access road and at least 600 feet from any dwelling which doesn’t belong to the hive property owner. “Our beekeeping ordinance was very out of date,” Jacob said.

The San Diego Beekeeping Society had approached Jacob with a request to relax the ordinance in order to promote the industry and preserve the county’s honey bee population. In addition to allowing non-commercial beekeeping on smaller lots, a setback reduction allows produce or flower crop farmers who do not necessarily wish to engage in honey extraction or beeswax sales to have hives on their farmland and could also allow hives closer to produce and flowers on non-hive farms. In October 2013 the Board of Supervisors directed the county’s Chief Administrative Officer to work with the San Diego Beekeeping Society and any other interested parties to investigate options which would protect and promote beekeeping operations throughout unincorporated San Diego County and to report back to the board within 120 days. The stakeholders included community planning groups, registered beekeepers, pest control operators, and the San Diego County Farm Bureau as well as the San Diego Beekeeping Society.

The county supervisors previously responded to regulatory relief requests from small winery owners and small equestrian operations by developing tiered ordinances, and in May 2014 the Board of Supervisors voted 5-0 to give county staff direction to fo­cus on a tiered ordinance and to work with stakeholders. In June 2014 the county’s Department of Agriculture, Weights and Measures (AWM) pro­vided information about regulations for other jurisdictions and the county supervisors voted 5-0 to direct county staff to return to the board with multi­ple draft tiered ordinances within four to six months. In August 2014 AWM began a community outreach effort with presentations by county entomol­ogy experts to community planning and sponsor groups.

In October 2014 the Board of Supervisors voted 5-0 to approve a preferred tiered ordinance for the en­vironmental review process. An en­vironmental Mitigated Negative Dec­laration rather than an Environmental Impact Report was released for public review in April 2015; the supervisors’ September 16 action also certified the MND and the associated mitigation monitoring and reporting program.

The new ordinance has three tiers. The first tier is intended for hobbyists and has a limit of two hives, although the practice of splitting hives prevents swarming and up to five hives will be allowed on a 30-day temporary ba­sis. The first tier requires at least a 25-foot distance from the property line and from roadways, a 35-foot dis­tance from any neighboring dwelling, and a 150-foot distance from sensitive sites such as schools, hospitals, child day care and elder care centers, parks, playgrounds, stables, and kennels. A property of approximately 6,000 square feet could have beekeeping if property configuration allows for the distance requirements to be met.

If a first-tier or second-tier api­ary is in a residential area and within 300 feet of a neighboring dwelling, a six foot vertical flyover barrier is re­quired.

The third tier accommodates large commercial beekeeping opera­tions and does not limit the number of hives. The minimum setback from a roadway is 50 feet, and while there is no minimum distance from a property line a neighboring dwelling must be at least 350 feet away and the mini­mum setback from sensitive sites is 400 feet.

Residents or site workers with a documented allergy to bee stings may request that their property be desig­nated as a sensitive site, and the dis­tance requirements may be waived if the hive borders open space or if the neighbors provide written permission for hives to be closer than the mini­mum distances.

“There’s that delicate balance between safety and enhancing an in­dustry,” Jacob said.

The number of colonies and the location of each apiary must be registered with AWM on an annual basis; there is no fee for the registra­tion. The annual registration process includes the completion and submis­sion of a best management practices checklist, and the beekeeper will be required to implement those best man­agement practices. Each colony shall be inspected at least once a month by the beekeeper to determine the po­tential presence of objectional honey bee behavior or apiary pests. AWM inspectors may enter the property, al­though if advance notice will not in­terfere with the purpose of the inspec­tion the beekeeper will have that prior notification. The bee housing struc­ture must have movable frames so that the inspector can have full access to the inner bee living quarters.

Registration of a hive does not involve additional requirements for the owner but gives the beekeeper ac­cess to pesticide and quarantine no­tices along with bee health and other outreach information, and registration also provides verification for insur­ance purposes in the event of hive loss.

“Part of this program is educa­tional,” Jacob said.

“These proposed regulations are well debated and a thought out com­promise,” Kukuchek said. “The new ordinance is an important step to en­suring the honey bee survival and fu­ture in San Diego County.”

The $195,000 one-time costs to implement the program cover software development, outreach and education, equipment, and general services. An estimated $150,000 annual cost will allow for staffing to implement and sustain the program. The supervi­sors’ October 14 actions included ap­propriating $300,000 from the 2014- 15 general fund balance for program costs while adding one staff year to AWM and appropriating an additional $45,000 for staff time to coordinate leasing activities of suitable county properties to beekeepers while direct­ing the director of the county’s Depart­ment of General Services to negotiate leases with commercial beekeepers in­terested in using county land for hives.

“There will be a public outreach as well,” said San Diego Beekeeping Society treasurer and Bonita resident Daryl Hern. “We are working to keep the domesticated bees healthy.”

The county supervisors opted against a fee to recover program costs. “I think it’s a minuscule amount of money to pay for healthy bees,” Horn said.

County entomologist Tracy Ellis noted that the outreach program could begin prior to the effective date of the new ordinance.