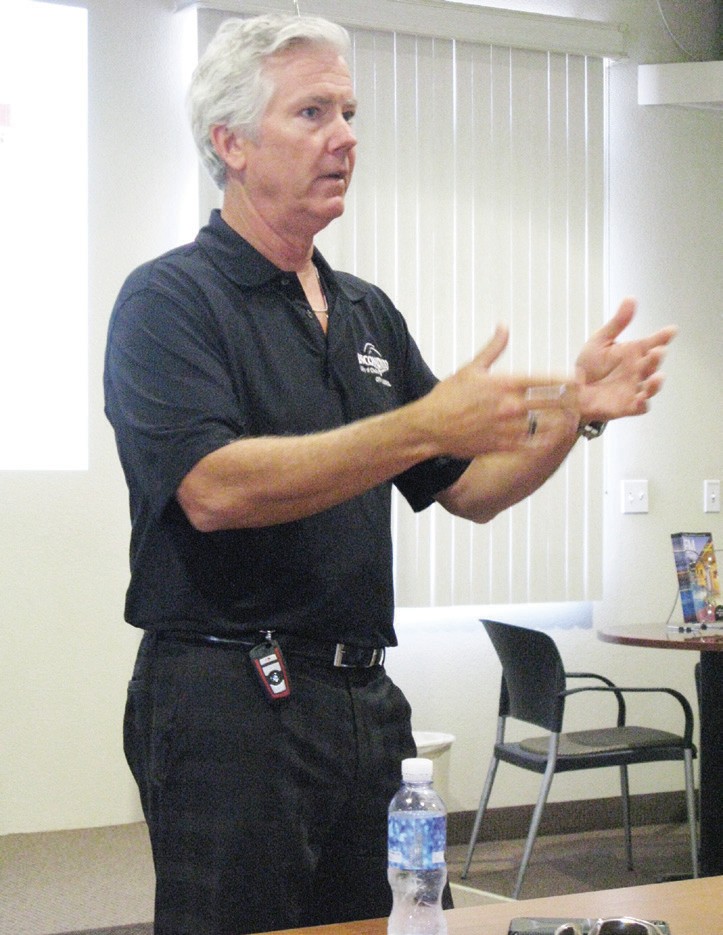 “A library informs and educates our citizens,” he told members, “It’s a des­tination experience for all the people who live here. It’s a civic gathering space. It’s an economic engine and it’s the cornerstone of education.”

He said the City Council’s current plan is to remodel the 30-year-old li­brary at 239 S. Kalmia Street, adding 8,000 square feet to the building for around $50 million.

About one third of that money would have gone to fixing up the old library, which is “toward the end of its future life,” Masson said. The rest of the funds would be used to expand the library to cover the current parking lot.

Of the plan for the current site he said, “We would be spending money on an old struc­ture. … At some point in time down we would have to take down that old structure and rebuild that, which would require more money.”

Rebuilding the old library would also involve prob­lems with “construction sequencing,” he added. Build­ers would have to work around a functioning library or the library may have to be shut down for a year or more during construction, he said.

The early projection for a library in the civic com­plex would be to cover the current parking area on the north side of Grape Day Park, straddling Escondido Creek. The structure would certainly have to include a new parking structure.

Masson said a swimming pool and adding more open space could be part of the plan.

“In my mind, the park is central to the core of down­town. So, what we can do by moving the library is to create a sense of place adjacent to our park, adjacent to City Hall,” he said. “That means community rooms spilling out into the green space, reading areas outside, maybe coffee shops attached to it, a cafe, reading ter­races, more green space where it’s all parking now.”

Another major feature is “opening up” the creek, ac­cording to Masson.

He envisions a people-friendly park along what is now a concrete-lined ditch, with “people coming down to have lunch, read or whatever.”

“There are a lot of opportunities to make this park cool and really the center of our community,” he said.

Masson expects city planners to have a more detailed proposal in about six months. Funding the new library will require a special election, prob­ably in 2017.

He showed a slide of San Mateo’s new library at 94,000 square foot with a 73,000 square foot underground parking structure that cost $55 million. He ex­pects the cost of the library here would be “about the same” as that and near the price of renovating the old library.

“So we have a choice, renovating a broken down old building or we can 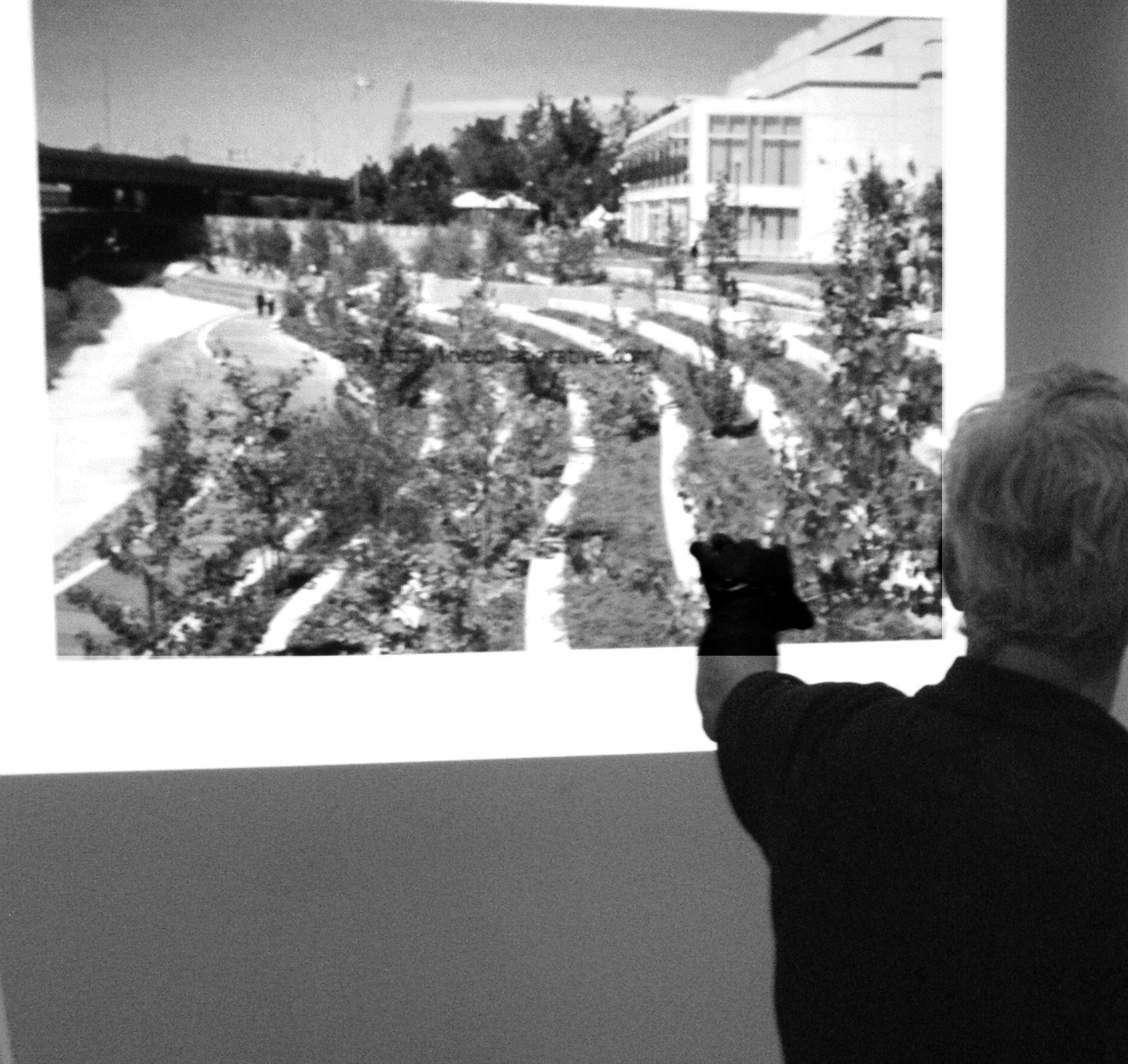 An artist’s rendering of the new San Mateo library, which Masson showed at the Economic Development meeting.

have a beautiful masterpiece,” he said.

Committee members asked ques­tions about parking, the changing con­cept of libraries in the digital age, and funding of the new downtown San Di­ego library, which garnered $20 mil­lion from the school district and a like amount from federal sources.

Chairman Ernie Cowan called for a vote on supporting the new library, which passed unanimously.

Kevin Barnard, president of The Escondido Creek Conservancy told members that, “San Diego County is one of the most biodiverse counties in the United States.” There are endan­gered species along with “carbon se­questering” chaparral in this Mediter­ranean environment.

“We have been involved in preserva­tion of about 3,000 acres in this water­shed” Bernard said and added that the conservancy is interested in seeing the library portion of the creek developed, along the lines of San Antonio’s River­walk and the Wooded San Luis Obispo Creek park that runs by that city’s his­toric mission.

“We began to realize that one of the most impactful parts of this watershed is this seven miles in the city of Es­condido,” he said. The concrete ditch, installed in the 1960s does what it was designed to do, handle storm water, “but, if you look at it today, the city has turned its back on it.”

A survey for the conservancy two years ago found that people who lived “right on the channel” didn’t know where Escondido Creek was. “They couldn’t identify it.” Barnard said.

He showed slides of creek projects in San Jose and San Antonio’s famous Riverwalk, whose 15 miles of wander­ing stream-park inspired him.

“It passes through all kinds of differ­ent neighborhoods,” he said. “There’s actually a place where they’re re-natu­ralizing the river. You can go kayaking on it. There are bike paths on it.”

Ann Van Leer, the conservancy’s ex­ecutive director, said, “There are a lot of green areas at the top and bottom of the seven-mile ditch. What we want to do is elevate the ditch.”

The water is not clean and is too hot for some species, including the South­ern Steelhead that breed in the creek, she added.

“We know that if the community gets excited about the economic devel­opment opportunities here, the creek is going to benefit,” she said.

She mentioned the Army Corps of Engineers’ $1.35 billion restoration of 11 miles of the Los Angeles River, saying that real estate brokers bought up land along the 11-mile stretch in an­ticipation of the restoration.

She would like to see that happen in Escondido, “We’re fine with that, be­cause (economic development) is what will drive the restoration,” she said.

The conservancy is looking to fund a study that will show what is possible for the creek/ditch.

“The library is perfect,” she said. “It’s a good way to start it off,” replied Masson.

Bernard added that purchasing land adjacent to the creek could be lever­aged with matching fund grants.

“For every dollar that you give us, we average about $100 for purchasing land through understanding how state and federal funding mechanisms work,” he said. “In fact, the momentum is build­ing at the state and federal levels to see these projects come through.”