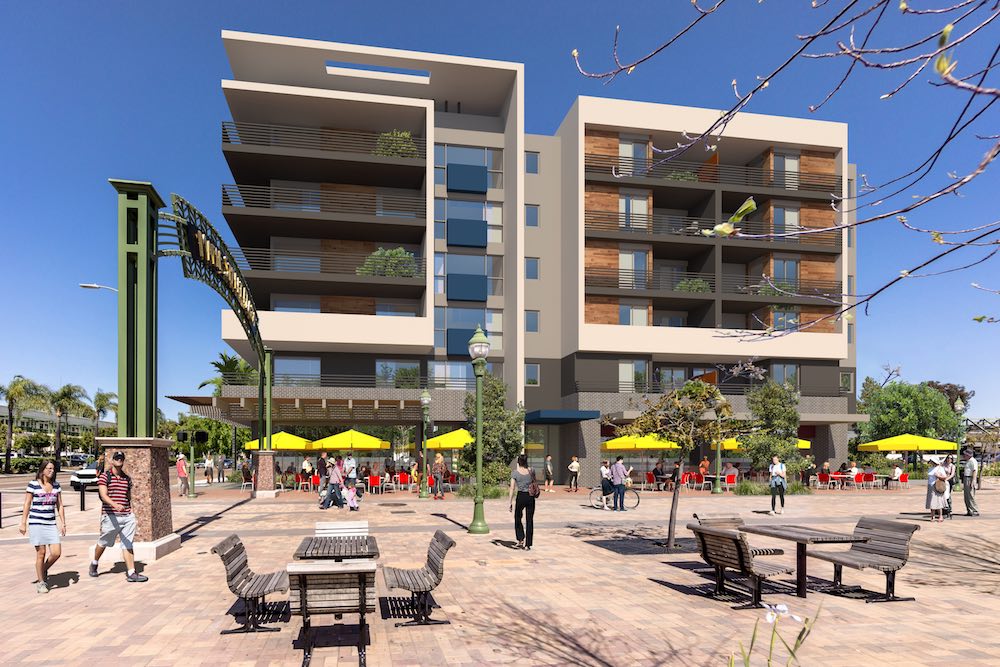 Artist’s rendering of the Aspire project, as seen from Maple Street Plaza. The city council turned the project down last week.

By a vote of 2-3 the Escondido City Council October 9 turned down the proposed Touchstone Communities Aspire project on the city-owned Parking Lot No. 1, which is across the street from City Hall and adjacent to Maple Street Plaza.

The vote came at the end of a long hearing Wednesday night where residents spoke for and against (but mainly against) the project. Some loved the modern design of the six story apartment building, which included 131 apartments, underground parking and some public parking. Others thought it was very much out of place in the historic Grand Avenue commercial district, especially its height, which required a variance from the district’s height limits.

Some businesses, like Filippi’s Pizza Grotto and the Taste of France bakery restaurant opposed losing the 118 space parking lot, possibly the most visible and used in the city, as an existential threat.

Bill Martin, the city’s director of community development, described the project of 131 apartments, with 4,289 SF of commercial space, underground parking on the 1.044 acre lot. To reach that density the developer required the state’s 35% density bonus, and a transfer of 24 units of density from the city. It also received a density bonus for low income housing.

Construction would have removed the parking lot, trees and landscaping and required that Maple Street Plaza be reconstructed and the public fountain relocated. The commercial suites would have used part of the plaza for restaurant seating.

Martin noted that at previous public meetings the two biggest issues were the loss of public parking and the building’s height and architecture.

He added that because diagonal parking is being introduced on Grand Avenue as part of the widening of the street, that the net parking would actually increase. Although the building was taller than normally allowed, it was about the same height as City Hall and the Arts Center, he said.

Kerry Garza, president of Touchstone Communities and his son Addison Garza, executive vice president, spoke for the project. They spent four years on the project, which was an unsolicited offer from them to the city. “We started with visioning with local stakeholders,” said the elder Garza—visioning that began a year and a half before they ever met with staff.

In September 2018 they signed the purchase agreement with the city, which was contingent on project approval. They made final submittals earlier this year.

Garza touted what he called “a high quality project that is unprecedented for the area as far as architectural quality.” He pointed out that the lot is surrounded by development,  less than half a mile from the transit center, with bike lanes nearby. “There are a lot of great transit amenities,” he said.

He described how he created a team, walked the streets, taking photos and used them “to create a project that blends in very well, with materials pulled from other downtown buildings.”

Arguing that Aspire, “will put Escondido on the map,” he added, “We’ve gone the extra mile to take Escondido to the next level. Maple Plaza was a great opportunity to create pedestrian linkages. We tried to face the building onto Maple Plaza, to bring feet on the street.”

He said the project was built to reflect the Grand Avenue vision plan, and that increased diagonal parking would more than make up for parking lost to his project.

Teresa Tuggle argued that the “high rise wouldn’t fit into the historic district” and “would be the start of doing away with our historic district. We love the charm. Let’s preserve our downtown Escondido.”

Carol Raye called the building “too large and out of scale” and “taller than City Hall. Those [height] standards should not be compromised to satisfy developers.” Making a comment that was echoed several times she concluded that it was “the wrong building in the wrong location.”

Karen Belter’s variation was: “This is not the right building at the right time. To have to decrease some of the requirements to allow this development should mean it’s a no go.”

Pam Boyer, owner of an antique store on Grand, called the proposed building, “beautiful, but it’s just wrong for this spot.” She called for a two-story parking structure at that location.

Misty Embry declared, “I believe this building is giving away the whole damned farm! It’s six stories of ugliness. We have plenty of high rise apartments. What we need is affordable housing. This lot belongs to the city, and that means it belongs to us. And we don’t want it.”

Diana Gill, manager of Filippi’s held a sheaf of petitions with 4,000 signatures she said she has been trying unsuccessfully to give to the city. “I’ve been manager for twenty years,” she said. “I want to support the people who support our business.” With the parking lot gone her employees would have to walk to Grape Day Park to get to their vehicles when the restaurant closes at 11 p.m. “I don’t understand what you guys are thinking. I’m not against this project, I’m against the parking part,” she said.

Sharon Sanders asked, “Why pick the center of our peaceful town for the most modern building?”

Tracy Bass said a lot of talk had discussed the “highest and best use” for the parcel. In her opinion, “Apartments are not the highest and best use. Condos would make the city more money. People who are renting won’t be able to shop at those shops or eat at those restaurants.”

Louisa Magoon, owner of the Grand Tea Room, and a board member of the Downtown Business Association (DBA), which supported the Aspire project, said it, “will bring new vibrancy to the downtown.” New residences would bring more business to Grand. “The biggest concern is parking,” she said. “However the city has secured a grant for additional parking.  The DBA favors diagonal parking. We should all be encouraged by the bigger picture.” She predicted the building would help make Escondido a “destination.”

Julianne Jones, who has owned four salons in Escondido declared, “Consistently I’ve had issues with parking.” She suggested that since city officials doubt that there is a parking problem, “How about shutting down the parking lot for a week? That may be the only way to show you how angry people will be when they can’t park. A parking structure would settle the issue. I can’t understand why we can’t get together on this one.”

Dan Forster, owner of Design Moe Kitchen & Bath, said the Aspire building wouldn’t take away parking. “It sits on a transportation corridor that gets them out of their cars and onto public transportation,” he said.

Alberta Agyan, one of the owners of A Delight of France Bakery & Bistro said, “I will be quite affected by this building . . . My business is my customers,” many of which are seniors. “We are closing off the area to them. Are we going to have enough parking, not just for the young and strong? Please be open to all the needs of all the city. Not at the expense of the elderly, the handicapped and those with children.”

Then city council members weighed in.

Olga Diaz started off with, “I am not enamored of doing anything on Lot No. 1 without significant public input. What I would love to see for Lot No. 1 and all publicly owned property is a visioning process. If we did not own that property I would feel different.”

She voted for the Touchstone project on Ivy but, “This property has many issues I’m concerned about.” That included the height issue. “That core was supposed to be preserved. That was so it wouldn’t drown out the charm of the Grand Avenue corridor.”

Diaz said she understood that Touchstone needed the higher density to make the project pencil in. “Those are not my numbers and not my concern.”  She said that whatever is built there would be there for the next hundred years and more.

Diaz noted that the Historical Society opposed the project, and although the DBA supported it, “many downtown merchants have expressed concerns.”  She concluded, “I cannot support this project as it is. Although I don’t dislike the design, I don’t like it for this location.”

Councilmember John Masson called the proposal, “a game changer for downtown. This is exactly what we need to get the city to the next level.” He said if they didn’t approve projects like this the state “will jam it down our throats without the planning commission or anything.”

He added, “A quality downtown is what we need. This is a big start in the right direction. This is the epitome of smart growth: get the most density you can next to transit. It activates Maple Street Plaza. It’s next to shopping and the arts. It’s perfect!”

Masson said studies show Escondido doesn’t have a parking problem. “We have a perception problem. Because they can’t park right front of your store and you might have to walk a block.” He added, “If you park at the mall you have to walk pretty far!”

He said turning the project down, “is not a good way to lead into the new millennium.” He disagreed that condos would be better for the city, and said, “It doesn’t pencil out.” He added, “The ideas that renters can’t afford to eat downtown is appalling to me.” Masson said the seven feet of additional height wouldn’t be noticed “in the grand scheme. What our grand scheme is, is to create something like a Little Italy. We are on the beginning of this. It’s a game changer. If we want to be who we want to be, and what we should be, the hub of North County as we were 15 years ago, this is what we need.”

Councilmember Consuelo Martinez said, “I don’t know that this is the highest, best use. We are under pressure to have a lot of housing, but it’s also important to have the right type of housing. A lot of housing isn’t necessary affordable to the people who live here.” She was also concerned about “tearing up” Maple Plaza. She concluded, “If this was a private lot, I wouldn’t have this sort of reservation.”

Councilmember Mike Morasco said he had lived in the city a long time and seen many building attempts over time, “and they haven’t destroyed the charm of the city. A lot of people felt that construction of City Hall or the new hospital would destroy the charm. John Paul the Great University has enhanced the charm. I totally echo the comments made by Mr. Masson. Over $2 million has been spent to get it to this point. It’s a landmark project. If I’m a business, I don’t look at it that I’m going to lose parking for my customers. I look at it that I’m going to have four hundred new customers move to my backdoor.  What am I going to do to entice those new customers?”

He said the type of renters would be in the $50,000-$60,000 a year range. “Nurses and firefighters. We want those kind of people living in the downtown. I have four millennial children. They rent and spend a lot of time out dining. Renters ARE diners.”

Morasco concluded, “We have state mandates we are woefully in need of complying with. I want us to make those decisions and not having them mandated. Seniors spend every day in the mall walking for exercise. Parking is a perception difference. I have lived here since the 60s and have never not found a place to park. If we stay stagnant, if we are not moving forward, we are dying.”

Mayor Paul McNamara kept his remarks brief: “I think it’s a great building and I’d like to see it somewhere, but that’s not the right location for it.”

The final vote was Morasco and Masson, yes; McNamara, Diaz and Martinez, no. The motion failed.

One response to “Council turns down Aspire project”