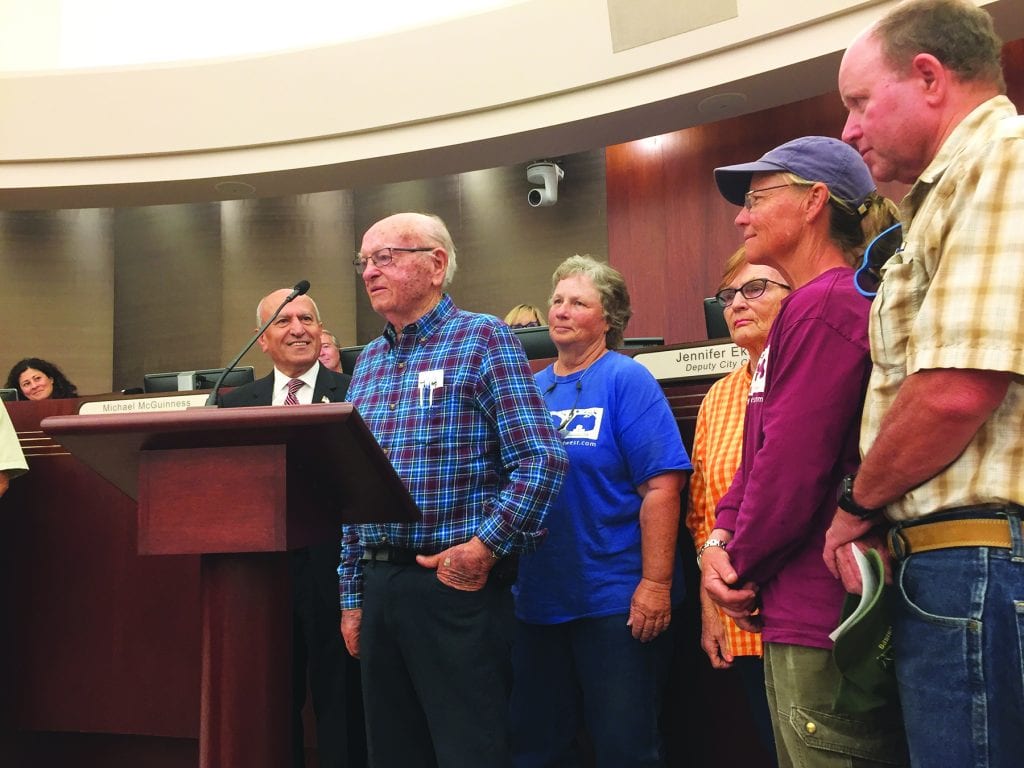 The Hillebrecht family, with family patriarch Ben at the microphone.

The city council Wednesday honored several Escondido families who have over more than hundred years made the community a center for agriculture.
In honor of Historic Preservation Month, the council in association with the Historic Preservation Commission honored the Hillebrecht, Grangetto, and Henry families and the Tom Bandy Blacksmith Shop at Grape Day Park. Carol Rea, chairman of the commission talked about their contributions.
Mrs. Rea read the following Wednesday:
“This year Escondido’s Historic Preservation Commission and City Council are joining together to honor Escondido’s rich agricultural history.
“And a rich history it is – dating back into the late 1700’s when the Spanish, then Mexican ranchos herded cattle and sheep here. By the time the City incorporated in 1888, a rail line from Oceanside to Escondido was finished and the Escondido Irrigation District had formed to build Lake Wohlford dam. There were 249 residences then. Within five decades, the population had grown to nearly 5000. Escondido was the place to come with the perfect productive climate to grow just about anything, including grapes, citrus and avocados.
“Ben Hillebrecht’s branch of the family has been farming in Escondido since 1924, when his father George moved the family here from Orange. Their farm became one of the largest citrus and avocado operations in the country.
“His two daughters Mary and Laura, along with son Mike, are the fourth generation of Escondido Hillebrecht farmers to carry on their local farming tradition, initiating direct sales of produce to local farmer’s markets. A third daughter, Sally, also continues farming with her family further north. With the disappearance of the family farm in California, this is a great achievement.
“Charles and Florence Henry were married in 1922. Henry Avocado was founded in 1925 when they found an ideal 80-acre parcel on an Escondido hillside and planted it in avocados. Those trees have been in continuous production ever since. A decade later they were harvesting, packing and delivering avocados to many Southern California customers. Unfortunately, Charles was killed in a tractor accident in 1953. His sons, Gil and Warren, took over the operation. They continued planting acreage, pioneered a forced-air method of ripening the fruit for market and expanded the business.
“Henry Avocado has innovated the avocado industry with new varieties and techniques and have now become one of the top suppliers of fresh avocados in the United States.
“The son of Italian immigrants, Edward Paul Grangetto Sr. first arrived in Escondido in 1913. He attended Escondido High School and graduated from UC Davis in 1938. In 1952 he and his wife, Josie, founded Grangetto Supply Company in a small warehouse on Washington Avenue.
“Since Ed’s retirement in 1982, sons Eddie Jr. and Kevin have owned and operated the successful family business, which now has four locations in North County. The Grangetto family embodies Escondido’s agricultural history and continues to provide supplies and expertise to the local farming community.
“For the last 25 years, the City of Escondido’s historic Grape Day Park has been the home of the Tom Bandy Blacksmith Shop, a recreation of the original shop that began on the corner of Kalmia and Ohio back in 1908… 110 years ago.
“The Bandy Blacksmith Guide is a group of teachers, students and former students who meet weekly to transmit knowledge and skills and to improve the Bandy Blacksmith Shop. The Guild started in conjunction with the school and the Escondido History Center coordinates the members’ various activities. Blacksmithing, metal work, and wheelwright construction are demonstrated for students from Escondido schools and visitors from all over. The Guild has provided its expertise to creation and repair of farm implements, but also to wider ranging projects all over California, including providing nails and hardware for the creation of a reproduction sailing ship in San Diego Harbor, stagecoach wheels for Knott’s Berry Farm, and a mud wagon for the City of Poway.”
Members of the families were asked to come forward and Mayor Sam Abed handed out the plaques.