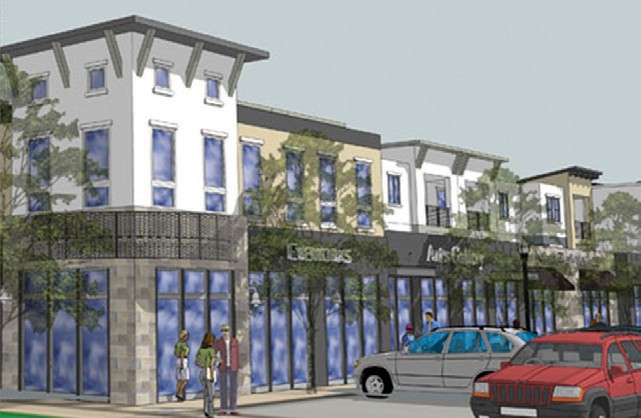 Integral Communities, which is purchasing the old police station, did Palomar Station in San Marcos. Shown is an artists rendition of the development.

The Escondido City Council Wednesday voted to sell city property across the street from the transit station— land that has lain unused for years—to a developer, Integral Partners Funding, which plans to build a mixed commercial and residential cen- ter. The sale price is $2.5 million.

A transfer of property will not occur right away. Instead, the developer will make a $50,000 deposit and an escrow of at least 120 days will follow. The property will not physically transfer for at least 18 months since it is currently being leased to the Warfighter Academy, whose lease runs for another year and a half.

Gil Miltenberger of Integral Communities told the council that his company prides itself on taking underused properties and repurposing them. An example of a development that Integral has done in this area is Palomar Station, next to Palomar College transit station. Integral Communities has twenty active projects in California with a total of 1,400 residential units.

Miltenberger said that Palomar Station is similar to what they are proposing to do with the property. It will include high-end apartments, condos and office space. It will connect to the transit station across the street.

“We want to incorporate a higher density residential project into the neighborhood. It’s an art. The target is three to four stories and densities of 40- 50 and a retail plaza. We want to create a place to connect to others, that is both walkable and bicycle friendly,” he said.

During the vote Mayor Sam Abed recused himself since he owns property at the nearby Mercado.

Councilman Ed Gallo said he hoped the developer would coordinate the project with the North County Transit District, “because this is the gateway to Escondido.”

Councilwoman Olga Diaz said she was excited about the project and said she hoped that it would be integrated into the look of other commercial developments, such as the Mercado on Grand Avenue. “If you could carry some of those elements it would tie into the beginning of Grand Avenue. I don’t want it to match exactly, but I’d like it to be an improvement to the neighborhood, and one that fits.”

She added that she hoped something would be done about surrounding properties that don’t have sidewalks and suggested that perhaps the developer might want to acquire some of the nearby parcels that the city doesn’t own. “It would be nice to do something about the ugly cinderblock buildings and make improvements to the creek.”

Miltenberger said, “Our goal if we can is to add additional properties. We want the development to be unique and also integrated.”

During the vote Diaz remarked that she hoped the $2.5 million from the sale would be used to help pay down the debt from Prop. P, which was used to build the new police station on Centre City Parkway. Normally the policy is for proceeds from sales to go into the budget reserve.