Council candidate Nicole Downey: not beholden to either party 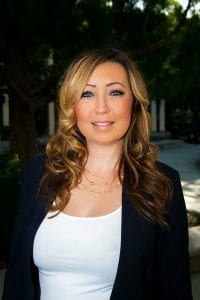 Nichole Downey is a candidate for the Escondido City Council.

Nicole Downey is running for Escondido council in District 2, against incumbent John Masson and fellow challenger Vanessa Valenzuela. This is her second time running for this seat.

Downey is a school resource officer for a private school. In her non-working time she is a member of the Library Endowment Foundation, and Escondido CERT (Community Emergency Response Team,) and Escondido Child Development Center.  She has also volunteered with fire station open houses and once a year volunteers with Tots ‘n Trucks.

Asked why she is running the candidate said, “I want to make a difference for the residents and make Escondido a better place for them to live.”

The same issues that prompted her to run four years ago are alive today. “Masson has not stepped up to address them. I’m still waiting to see what he has done for the city,” she says.

She is running as an independent in a race where, despite the fact that city offices are legally-speaking non-partisan, Democrats and Republicans typically line up behind party-endorsed candidates. “I’m not a Democrat or a Republican,” she says. “I don’t believe it’s a partisan position, or that it should be. I want to appeal to the residents and do for the residents what I think is best without being told by the parties what position to take.”

Does she mean that local parties tell their candidates how to vote?  “They would expect me to take certain stands,” she says. “I attend meetings of both the Democrats and Republicans and other groups in town such as ECCHO and CARE. It’s important to immerse myself in the positions of all these groups.”

She has no trouble talking to anyone, she says. “I want to hear everybody’s ideas. It’s hard because people want to talk about what divides us instead of what we can come together on. We want to put bridges out but people have to be willing to meet halfway.”

Downey’s top “hot button” campaign issue: “We need to get some affordable housing and restructure what we are doing for the homeless. They’ve pushed the homeless out of Grape Day Park into the surrounding businesses. They are being overrun by people setting up camps.”

Her mother lives near the old hospital, and Downey routinely does sweeps around her home for used needles and other detritus before she goes to work. “I worry about her safety,” she says. “We have a methadone clinic near Date and Ohio. They are feeding the addiction instead of providing the solution. We are putting a Band-aid on the problem.”

She adds, “I’m not looking for a ‘quick fix.’ We already have a city task force that works with the Police Department. I think we need to beef up the number of police that are working with that task force.” She notes that San Diego city is taking a chance actually providing roofs, even if they are canvas, for some homeless people and at the very least provide them with a shower. All on city land. “It’s very risky,” she points out, but might help the situation. “It’s not easy to live if you are homeless. If we can help them to get job experience that might help them get off the streets. We have a ton of city jobs that need doing. Like picking up litter on city trails. Even volunteering ten hours a week could help,” she said.   The volunteer hours could be translated into work hours towards getting them actual employment.

“I think chasing them around with a ticket book will only take the city so far. There are things we could do that won’t cost much,” she says.

Going hand in hand with the homeless problem is affordable housing: another of Downey’s “hot button” issues. “We have many people leaving the city because it is so expensive to live here,” she says. “There are a lot of businesses on Grand that are putting for sale signs. Even my opponent John Masson’s commercial property is up for sale for $2.8 million.”

Another problem she would like to address with just a little more money, but to more effect, would be to provide several colors of paint for city employees who go around town eradicating graffiti. Downey points to the city of Vista, which has a truck with multiple paint colors so they can match the original color before it was tagged.

“Painting over graffiti with the wrong color doesn’t do much,” she said.

Another project she would like to start is “little libraries” where local residents can bring books and borrow them. She would like to get donations of materials and time to create a few of these at various locations; such as along the creek. “I’d like to see them all over the city,” she said.

Downey believes higher ranking city employees are paid too much. “I’m all for taking care of city employees, but the guys at the top make too much,” she says. “Instead of fixing the problem we are making it worse.”

Downey opposes Safari Highlands Ranch, a project of 550 lots by  Concordia Homes east of Rancho San Pasqual on unincorporated land seeking to be annexed into the city. “I don’t think that’s a safe idea because of the fire hazard,” she says. “It has one road in and out. You’ll be putting families at risk.”

As noted above, Downey volunteers with Escondido Community Child Development Center, which operates on city owned land. She says the city is trying to raise the rent of the center from $5,000 a month to $12,000. “I think they are trying to force them out and selling the property as Sam Abed did with the land that was once occupied by old East Valley Parkway library branch.”

She adds, “They forced the people out of the old library and sold the land to one of Abed’s contributors and now they are trying to force us out of this facility. That’s one of the things that is so frustrating. It feels like they are taking advantage of the situation.”

Downey opposes the current city campaign contribution limits, which are higher than several nearby cities. Escondido’s limit adopted in 2013 is $4,300. By comparison: San Marcos’s limit is $250; Vista is $300; Encinitas is $250 and Poway is $100.

“The limit right now is way too high,” says Downey. “It’s ridiculously high. Sam Abed passed that in 2013, bumping it up 700 percent.“ She adds, “I’m not taking any contributions. There are so many free things you can use to get the word out, such as social media and my Facebook page: ‘Nicole A. Downey for Escondido City Council.” She does not, however, have a website.

Just to show how frugal she is, Downey has a lot of printed material from four years ago. “All the issues are the same,” she says, adding, “I’ll be just as frugal with city resources. My resource is the people who want to make the city better.”

Noting that one of the biggest problems facing the city is the pension problem, she says, “We are going to have to create more revenue for the city. This problem is not going to be easy to solve.

Downey plans to attend the upcoming election forums around town. You can call or text her at 760-705-8496 or email her at nicoleforescondido@gmail.com.  “If people call I will try to get back to them within the hour. My favorite thing is when residents call me and we can have an actual conversation.”