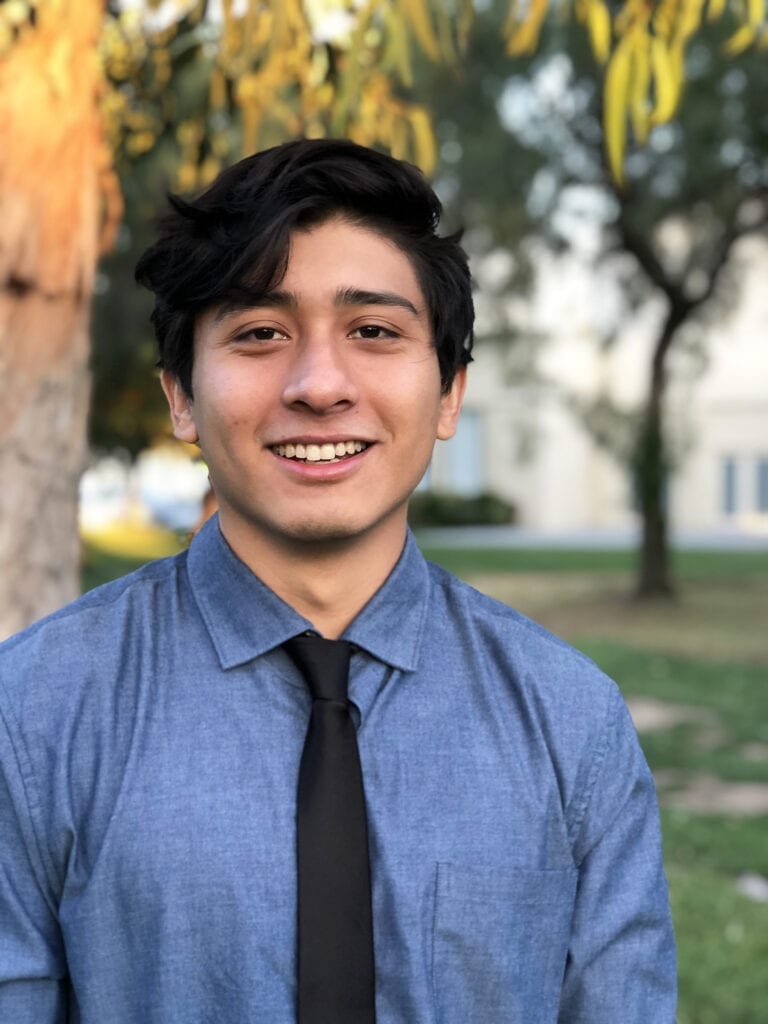 Andres Yanez is a candidate for the District 4 Escondido city council seat.

He is a member of the group Juntos for Justice.

An Escondido native, he says, “I grew up here seeing and experiencing some of the city’s problems. The biggest catalyst in my life was the death of my father. He was killed by suspected gang members.” He was 1 year old at the time. Many policies he proposes he has been thinking about since he was 15.

Yanez’s top priority, “will be improving our public safety.” One tool he would employ: “Social workers to address non-violent situations. That would free up officers. Officers don’t always need to be dispatched.”

He points to the CAHOOTs program that has operated for 30 years in Eugene, Oregon. Where dispatchers sometimes send medics and crisis workers instead of cops. “They take up one percent of the police budget but are taking seventeen percent of the calls,” said Yanez. “This frees up police officers. If they don’t have to focus on homelessness they can address the serious crime element.”

Yanez continued, “I really want to focus on public safety and not forgetting anyone.  It’s not about just gang violence, but I mean other means, like more LGBTQ resources. Forty percent of homeless youth identify as that. I want to address sexual misconduct that happens in schools, so students can safely come forward.”

One way to address homelessness, he says, is an immediate solution: “the safe parking program. It allows homeless to safely pitch a tent or park in empty parking lots.”

He thinks a lot about those “who are left out of our conversation. In this city we went from policies against immigrants, from an ordinance that prevented landlords from renting to undocumented people— to no longer talking about it. To throwing them under the rug and not addressing the issues. Increasing public safety is about reaching out to them.”

Yanez wants undocumented immigrants “to get basic health care, whether helping them to get to doctor’s appointments to classes and workshops so they can feel safer and know what their rights are—and citizenship preparation classes.”  The closest classes are in San Diego, he says. “We can also facilitate a program for online classes. Cutting back costs and provide them to anyone with access to internet.”

He would legalize cannabis dispensaries. “While pot is not a gold mine it will be helpful in raising revenue,” he said. “It could really help the budget deficit. It’s more than just saying ‘Heh! We’re going to help business.’ We need to help businesses move their operations online. Many of our stores don’t have an online presence or the ability to do deliveries.”

Yanez proposes a single website highlighting Escondido businesses and products, “Helping brick and mortar stores move online so they can compete with Amazon,” he said. “Instead of buying from Amazon you could see  products being sold locally. When you buy locally it could get to your home in a day or two, using a single delivery system, which would boost sales tax revenues.” This would give Escondido the capability to “future proof the economy,” he said.

Yanez supports a police citizens review commission. “We have to ensure that it can thoroughly investigate and have the power to subpoena and take disciplinary action,” he said. “Civilian boards have been implemented in other cities. They lack authority so It’s only a small piece of the puzzle. I want to bring all on board.”

He wants to implement the EPIC (Ethical Policing Is Courageous) program developed by the New Orleans Police Department. It trains how to intervene to stop a wrongful action before it occurs. “They have had great results in New Orleans and reductions in citizens’ complaints,” said Yanez.

He also supports Law Enforcement Assisted Diversion (LEAD) where someone arrested for a non-violent crime is given support rather than jail time. “In Santa Fe, New Mexico where it was implemented, it cost $9,000 per individual over three years, rather than $43,000 for someone going to prison,” said Yanez.

“There are so many alternatives to free up officer time and resources and address nonviolent situations and reduce arrests later on,” said Yanez. “There is a program called Sobering Station instead of incarceration. Officers spend less time arresting and booking someone whose only crime is public intoxication. They avoid charges and get counseling and access to long-term treatment.” He continued, “Jail admission costs $280 per day, while at full use a sobering center costs $127 per day. None of these reforms are divisive. Everyone can agree on them. We want officers focusing on serous crime and let social workers do social work.”

Asked about the one cent sales tax the city council failed to put on the ballot several months ago, Yanez said, “I would have been in favor with a few modifications, such as a sunset clause.”

The candidate also wants to address issues specific to his district. “I ask about neighborhood specific problems. When I was speaking I have heard lots of complaints about mail theft. Someone else was complaining about lack of sidewalks. And we do lack a lot of street lights in Escondido.”

Campaign in the time of COVID-19 is difficult. “We will not knock on doors. That would be unsafe,” he said. “We will do everything on social media, such as Instagram to younger voters. Not every is on social media so I have a team of volunteers calling people by phone.”

Although he is endorsed by the local Democratic party, “I reach out to everyone,” he says. “During the protests I saw a counter protester and went over to talk to him and found ways we could agree.”

Find out more by visiting: