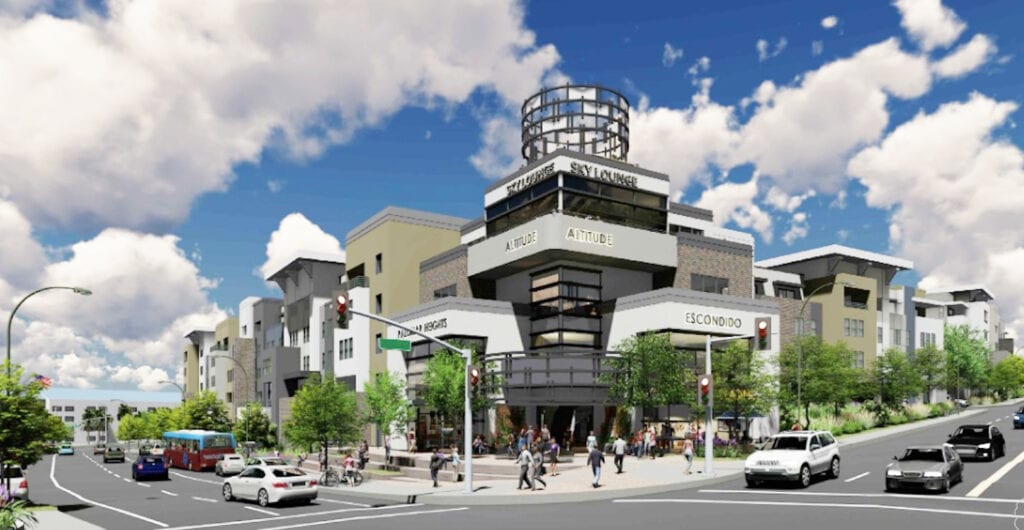 The Icon tower will, developers hope, become a symbol of the revival of Escondido’s Grand Avenue and downtown area.

The Escondido City Council January 27 voted to approve of the Integral Communities’ project Palomar Heights. The vote was 3-2, with Mike Morasco, Tina Inscoe and Joe Garcia voting for and Consuelo Martinez and Mayor Paul McNamara voting no.

It also approved of an option that exempts the developer from paying for municipal services.

At the end of the vote, Mayor Paul McNamara quipped, “I’m sure Integral is happy tonight!”

Palomar Heights is a redevelopment of the Palomar Health Downtown Campus on land currently owned by Palomar Health but which will soon be transferred to Integral. It will encompass hospital property and some surrounding property.

The mixed use residential and commercial project of 510 multi family dwelling units, includes 258 apartments, 90 senior apartments, 72 rowhomes (a house that is one of a row of identical houses side by side and sharing common walls) and 90 villas.

It will have 10,000 square feet of commercial, with 7,500 SF for the primary apartments and 2,500 SF for senior apartments. The commercial square footage could be used for such things as restaurants, a café or market.

The four apartment buildings will be four stories and 64 feet tall. There will be a pool, spa, clubhouse and cabanas and pocket parks within the project.  Rents will range from $1,650 to $2500 per month.

There will be 879 spaces of parking.

Existing structures will be demolished to make room for the new development.

Valley Boulevard—which runs from Valley Parkway to Grand Avenue through the hospital site— will be improved and changed into a one way street with two northbound lanes that will join up with North Fig Street. It will have wider sidewalks and landscaped areas.

The Icon Tower, the most visible part of the development, will front onto Grand Avenue.

The developer got a density waiver, exempting it from the more than 1,300 unit density the zoning calls for. This is being done by a density transfer agreement which transfers density to other, future developers in the city.

Staff had recommended charging Integral for community services at an estimated $204,000 annually. The council instead exempted Palomar Heights, which staff estimated will cost the city $204,000 a year.

This project has been hanging fire for several years and, under pressure from the city and public, made significant changes.  The 75-foot Icon Building was revised and redesigned and the architecture changed. Its final iteration includes a ground floor farmers market and open air bar at the top.

The proponent described the project as part of a “dynamic city center,” and an element of an “18-hour city.” That is a term economists use for mid-sized cities with attractive amenities, higher-than-average population growth, and a lower cost of living and doing business than a larger urban area.

Palomar Heights, says the developer, would bookend the town center, with the California Center for the Arts, Escondido at the other end.

“It’s not about more brick and mortar it’s about more people living downtown,” said the Integral representative, who also talked about project’s challenges, such as planning within the irregular shape of the hospital’s footprint.

Councilmember Tina Inscoe spoke about the “incredible passion of the downtown area,” and said her perceptions of it had been formed by such iconic features as the Arts Center, the Maple Street park and the new Grand building. “A Grand visioning plan will be the sum of all those actions. I am very encouraged about businesses who choose to invest in Escondido.”

Councilmember Consuelo Martinez was concerned that the project didn’t have more density and diversity of rents. She liked the senior apartments, which will be deed-restricted, “but the price is very high and doesn’t match most seniors. I hear ‘attainable’ and ‘affordable’ and that means different things to different people and doesn’t jibe with spas and amenities.”

Regarding the lost density, Martinez asked, “How will we get back those units? I’m concerned that we will just defer the problem. We need more affordable housing and this without that is unacceptable.”

Councilmember Joe Garcia watched the evolution of the project during his years on the Planning Commission: “I saw the plan that was presented and we made our comments. The plan was very deficient in a number of areas, and there were public comments.” Garcia added, “We began to see a project that was more workable and would fit in better. The project before us is very different from the one at the very beginning. I’m happy to see that the developer has taken into account the comments.”

He said he understood the desire for more density, “but the way the project is developed it seems like it is not feasible. I believe this project will help revitalize downtown and bring back foot traffic,  and help businesses downtown. It think it is a piece of a larger puzzle being put in place to help revitalize the downtown.”

He likes the project’s “open meeting spaces for people to walk by and spend some of their hard-earned income and help the city.” He also liked that the city would get property tax from the land, which it doesn’t from the hospital district.

Councilmember Mike Morasco said he had many memories of the hospital, “lots of happy and sad moments, dealing with friends, loved ones and family members.”

He said he believed Palomar Heights would be of “tremendous benefit” to the city, and said, from his experience of working with geriatric patients that the rents proposed are about what most of them pay. “I have individuals in senior apartments who pay significantly more than what is being proposed here.”

Morasco said the project would enhance pedestrian traffic, “and support the many downtown businesses that are in desperate need of our ongoing support.” He added that “affordable is relative to the region and the area and what the market will bear. We also need work force housing and this proposal satisfies those needs. To create workforce housing for our teachers, firefighters and policemen and others looking for entry level.”

He described Palomar Heights as an infill project that qualifies as smart growth. “It’s not perfect but no project is perfect. It has things that are inviting; including homes that can be purchased and not just rented. I’ve been encouraged by the willingness of the developers to make changes.” He added, “At this time it is what we need in the city of Escondido as far as bringing in families into our downtown area to help in renovation of our businesses and downtown corridor.”

Mayor Paul McNamara spoke in favor of demanding a better project. He said he understood that the hospital district would like a project now, “because it’s a drain on their books and the DBA wants business as fast as they can get it.”

But he argued for a project worthy of an Escondido postcard that residents would send to show off their city.  “Is this the thing we want to identify us as Escondido? I have some concerns, some real concerns.”

He noted that the city is assigned density by Sacramento and the San Diego Association of Governments. He said in the last eight year cycle the city only added 1,000 units, “and none were affordable.”

The numbers of units the city is supposed to add in the next eight years is 9,000. “There isn’t a lot of land available, and we are using half of what is available,” said McNamara. “We are playing a numbers game by moving the density. We are losing that land for generations. I struggle to see this as that iconic building we will all be proud of.” He concluded: “It’s not meeting the needs of our city and we have had too many projects that haven’t met the needs of our city.”

He disputed Morasco’s figures that higher density makes a project unaffordable. “Chamber experts have said those costs are closer to even,” he said. “I struggle with that assumption. The biggest thing with me is affordable housing. We are a working class city and we need affordable housing. This is not as good as it could be. I don’t want my name associated with this. It’s our city and we are held accountable for what we vote and approve.”

Morasco answered that his numbers came from the Building Industry Association (BIA). He said that the numbers of units the city is supposed to add are not his goals “Those numbers are set by the region and not by us, and they are not our goals. The tail shouldn’t wag the dog.” He called the density goals “unrealistic.”

McNamara said “The concern is that if we stop meeting these numbers that local control would be taken by the state.”

Inscoe said she supported the project because she had been moved by the plight of the downtown businesses who need foot traffic, “feet on the street.” She was concerned that another delay would mean more years without that traffic.

McNamara said he understood that COVID has hurt businesses, “but if we had a million more people, COVID would still restrict their movement.” He said that despite the pandemic he has seen businesses open up on Grand.

After the 3-2 vote to approve the project, there was a short discussion as to whether the project should also be exempt from city services fees, as several other projects have been in the past.

The mayor warned that the city can no longer afford such accommodations. “There is no cash. If we don’t charge the developers for infrastructure costs we are cutting services, and we are subsidizing the developer. Where do you want the money to go? I want it to go to Escondido. What service are you going to cut so the developer doesn’t pay these costs? What we’ve been doing is giving the developers some pretty decent breaks and we aren’t getting the revenue that we need.” He added, “There is no free lunch.”

The vote was also 3-2 to exempt the project from the infrastructure fees.

In other business the council approved moving the meeting times of the council back to 5 p.m. from the 6 p.m. meeting time that had been in force for several years. Closed session meetings will begin at 4 p.m. This change had been proposed by councilmember Morasco. It was adopted by a vote of 3-2.

The council also voted approve the proposed Independent Redistricting Commission budget in the amount of $200,000 to pay for an expert consultant, translation and publication of public hearing notices, interpretation services and miscellaneous staff expenses.

Leave a Reply to So Cal Baker Cancel reply