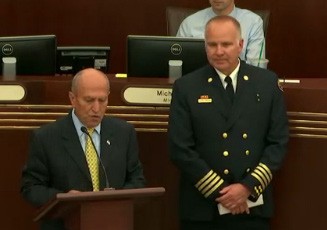 Wednesday, June 8 the Escondido City Council adopted a $92.6 million budget for the two-year fiscal period of 2016-2017.

The budget was developed by all de­partments of the city.

Assistant Finance Director Joan Ryan gave the annual report to the council. She noted that the new bud­get projects an annual growth of 4%, which reflects the fact that the budget has risen 4% each year since 2011.

This year $3.9 million in additional funds is expected to be collected from sales tax, property tax and charges for services by the city.

Sales tax was the largest component of the budget revenue, at $37.2 mil­lion, with property taxes coming in second at $24.3 million and $8.7 mil­lion for city charges.

The operating budget’s largest ex­penditures are 67% for public safety, 12% for public works and 9% for 9% for community services and develop­ment.

There is currently $16.9 million in the reserve fund.

The new budget funds four full time positions, raising the number of city employees from 562 to 566. The four new positions include a building in­spector, finance position and positions in planning and water and customer service.

At the June 15 meeting the council held an installation ceremony for the new fire chief, Russ Knowles.

“Escondido has come a long way since 1890 since fire service as pro­vided by a volunteer department with a handcart and a garden hose,” declared Mayor Sam Abed, who made the pre­sentation. “Since those early years our fire department has evolved into a high­ly trained group of men and women dedicated to protecting our community. We have been fortunate to have many outstanding fire chiefs over the years. Last month we honored chief Lowry Mike Lowry.”

Abed introduced the new chief, who joined the Escondido Fire Dept. in 1991 as a firefighter and rose through the ranks, to fire captain, division chief and finally assistant fire chief.

Chief Knowles was joined by several members of his family, including his mother, who pinned his new badge on his chest to the applause of the audi­ence, including many members of the department.

Chief Knowles gave a few short re­marks, “I’m truly humbled and honored to serve as the fire chief and lead such a great group of men and women,” he said. “Our department is healthy and the morale is strong.”

Knowles promised to continue the traditions of the fire department. “We will be proactive, we will be progres­sive and we will always be profession­al,” he declared.

He thanked the staff, the firefighters association and other city department directors, “and the brothers and sisters in the police department, as well as in neighboring fire agencies. “Nothing would be possible without each mem­ber of the team carrying out their jobs.”