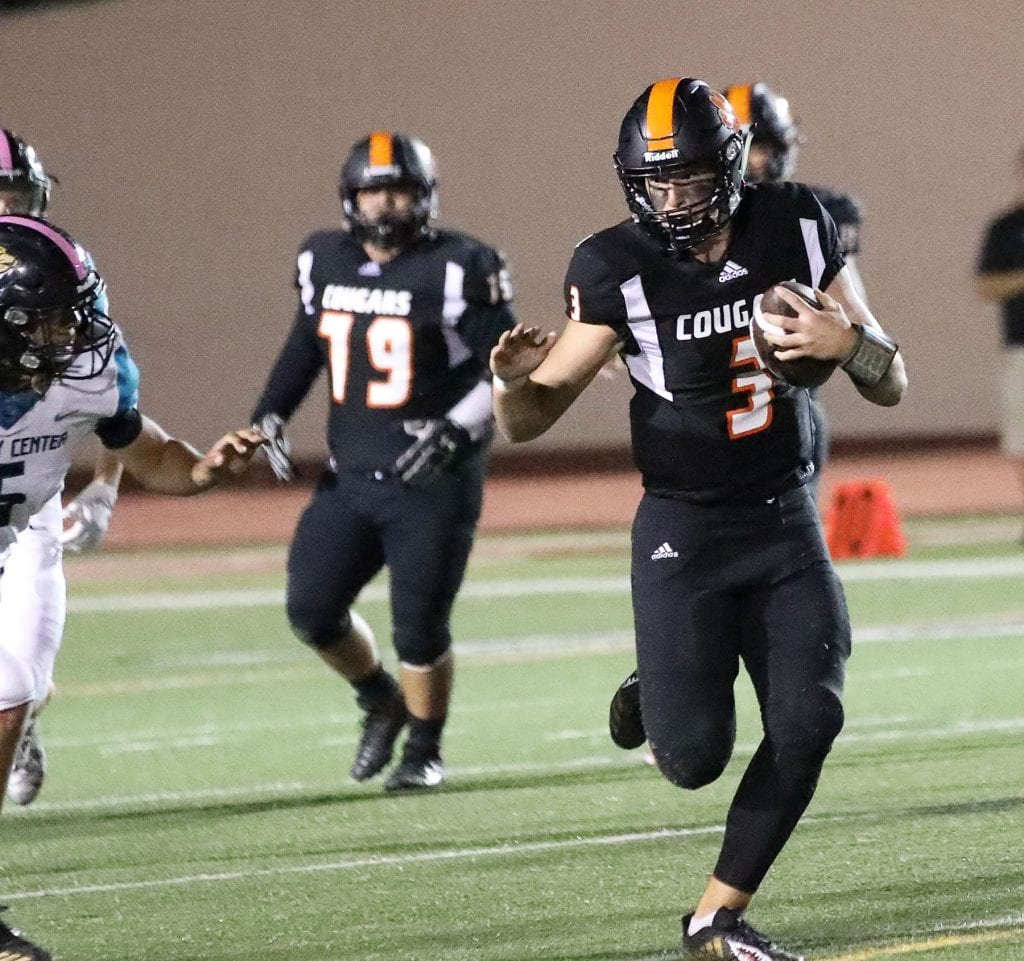 Along with stellar running back Matt Malone, junior quarterback Robbie Ramos (3) is expected to be a huge weapon for the Cougar offense. Photo by Lenny Kerbs

You can hear it in Jud Bordman’s voice. You can see it in his eyes. Moreover, the positive body language that the Escondido High football coach exhibits is another telltale sign.

In a nutshell, the fourth-year Cougar head man is as upbeat and pumped as he can be about the team’s prospects for the upcoming season. And why shouldn’t he be? Things appear to be clearly on the upswing for his burgeoning squad.

To begin with, the interest in the program is growing substantially with 140 players having turned out for the three different teams that Escondido will field in 2019.  In addition, the Cougars will benefit from having an enviable total of 16 varsity starters returning to the fold.

Even more encouraging is the fact that there is an athleticism, physicality and depth that exists that simply hadn’t been present in the recent past. Don’t look now, but the Cougs look poised to make a move and do some real pouncing. “We’re really excited around here,” Bordman says. “We have some big expectations like competing for a league championship and getting into the playoffs. The guys definitely feel like they’re ready.”

One of the biggest reasons for optimism is that Escondido appears to have the personnel to make their pro-style attack balanced, productive and dangerous. In stud running back Matt Malone, someone who has already drawn interest from a dozen colleges, the Cougars have a player capable of challenging for Valley (League) MVP honors. Long at 6-2, Malone is fast, physical and extremely athletic. He can pop any kind of run be it inside or out and possesses real game breaking  ability. While others are being counted upon to make an offensive impact, there’s no denying that Malone is the straw that will stir the drink.

A Cougar who is really coming on strong is quarterback Robbie Ramos Jr., an imposing specimen at 6-2, 210 pounds. Equipped with an exceptionally strong arm, a quick release and good touch, Ramos can make all the throws be they shallow, intermediate or deep.  He’s also shown a knack for reading defenses and rapidly processing information. Able to both scramble and move, Robbie isn’t easy to bring down because of his considerable size. And though he’s taken some hard knocks over the past two seasons, Ramos has learned some valuable lessons having competed against some topflight opposition. The experienced junior seems all but destined to really step up in this, his third year as a starter.

A receiving corps that Bordman rates as the “best one since I’ve been here” should make Ramos’s job much easier and is expected to be a bona fide factor. In the 6-1 Tajae Brooks, Esco has a skilled and fast pass catcher whose route running is swiftly improving. Meanwhile, the slot position will be manned by Victor Seneres, a determined 165-pounder who runs crisp patterns, gets out of his breaks quickly and motors up the field in one heck of a hurry. Bordman also expects the H-back position to be a contributor to the passing game.

And upfront, a pair of guards figure to lead the way for a line that Bordman is very high on.  Seasoned senior Alessandro Cardenas is a 280-pounder who’s as strong as an ox, moves well and can pull to great effect. As for the 6-2 Devon Brito, he’s quick off the ball and shows superb lateral movement.

Operating out of a base 4-3 deployment, Bordman believes the Cougars have the wherewithal to be a stout and stingy defense. Three-year starter and Mike linebacker Artie Morales should be a cornerstone guy because he’s smart, hits like a truck and owns great lateral movement.

On the back end, 5-9 free safety Elijah Joyce is a gamer with his knack for covering ground and having a real nose for the ball. At the corner position, Dominic Torres is a heady and speedy defender who can get physical and go into lockdown mode. And then of course, there is the multidimensional and ubiquitous Malone. Though Bordman will do his utmost to manage Malone’s playing time due to his offensive duties, you can nonetheless expect Matt to take plenty of snaps at corner, particularly when a game reaches critical mass. With his undeniable two-way impact, is it any wonder that Bordman refers to Malone as the “heartbeat of the team?”

As for down in the trenches, nose man Miguel Perez will be the mainstay. At 280 pounds, the converted offensive lineman is a load who’s good off the snap and does a fine job of occupying enemy blockers.

Finally, when it comes to the special teams, things looked fairly solid. Junior Josue Flores is an improving punter who can consistently hit field goals from 30 yards out yet has the range to go much further. When assessing the return game, it appears as if a rotation system will be in place with Malone, Seneres, Brooks and Brody Mossbarger all having a chance to bring the ball back.

Always quick to give credit to his players, Bordman also wants it known that Esco’s football ascendency is a testament to a talented and committed coaching staff that includes coordinators Jeff Alexander and Russ Johnson. “They’re a great group of assistants that have totally bought into what we’re doing,” Bordman says with admiration. “We’ve got 10 on-campus coaches that promote a great atmosphere and work really hard. It just feels like we’re all members of a large family.”

It certainly appears as if everything is in place for the Cougars to once again assert themselves, become a team of notable relevance and have a bust-out year. Bordman senses it and so do his players. A new dawn just might be on the horizon. This could very well be the season when the Cougars get back to doing some serious growling.