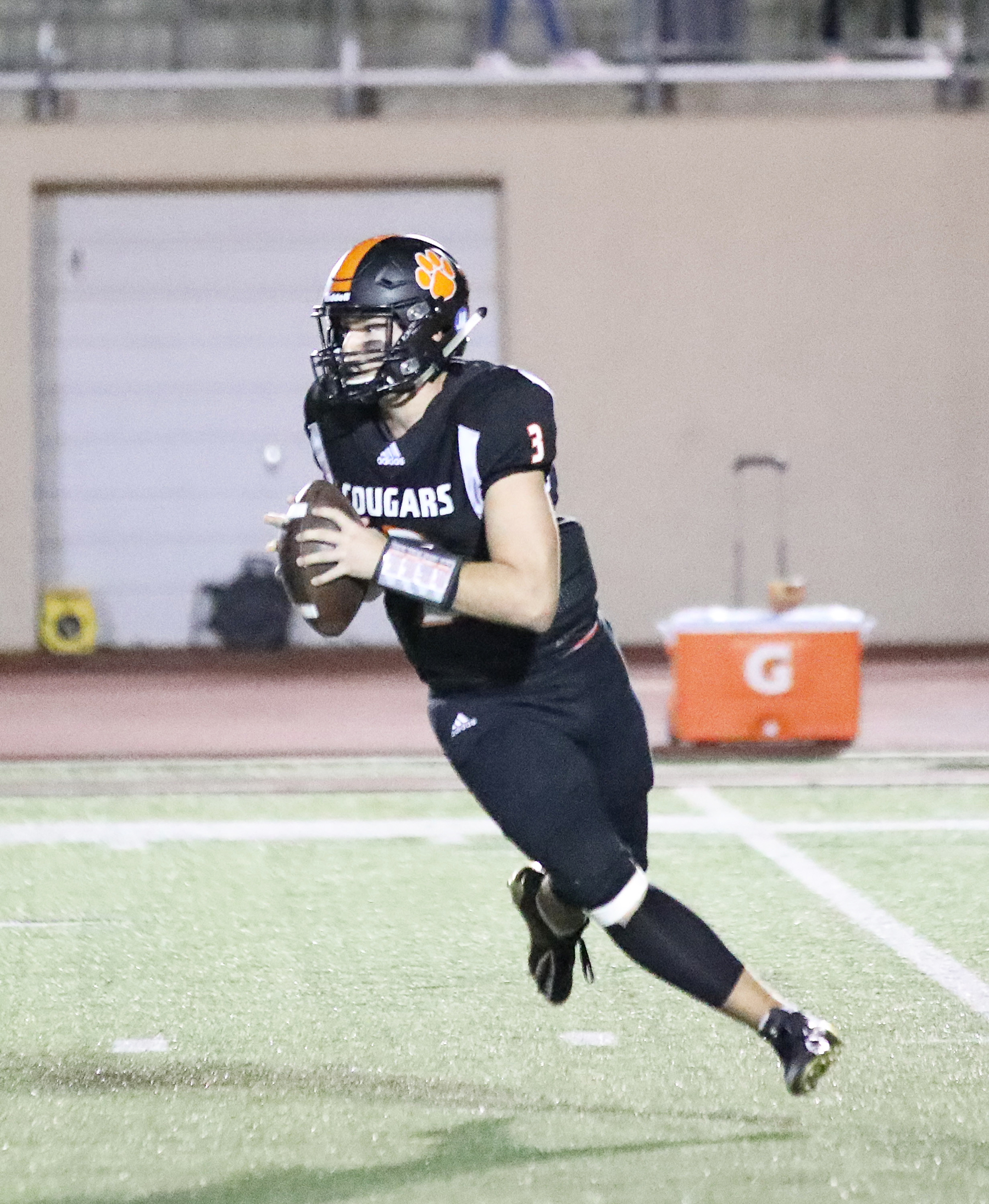 Gifted quarterback Robbie Ramos is looking to have a banner senior season while directing the Cougar offense. Photo by Lenny Kerbs

As Jud Bordman prepares to enter his fifth season as head football coach at Escondido High, there is no doubt he has made real headway while at the helm of the Cougars.

Not only has EH achieved steady improvement throughout his tenure but the relatable, engaged and highly organized Bordman has seriously ginned up the interest in the program as reflected by the sizeable number of players turning out not only for the varsity but for the jayvee and freshman squads as well.

Last year was, in many ways, a watershed season for the Cougars (6-6). For the first time since joining the Valley (League) in 2014, Esco posted a winning record (3-2) in that competitive circuit. Moreover, Bordman’s club downed Classical Academy 31-7 in the opening round of the Division IV playoffs for its first postseason victory since 2009.

And along with those significant accomplishments was the continuation of a mindset whereby with each succeeding season, the primary goal for the Cougs is to exceed what had been previously achieved. “We are now at a stage where we always want to set the bar higher every year,” says Bordman. “Last season we made the playoffs, won a playoff game and lost in the quarterfinals. We definitely want to build on that and go even further this season.”

Doing that won’t be an easy task because not only is Esco moving up into the Division III ranks which is loaded with plenty of formidable teams, but the Valley figures to be even more competitive with improving teams like Rancho Buena Vista and Fallbrook trying to find their way among mainstays Ramona, Valley Center and San Pasqual. You don’t have to be clairvoyant to see that the Cougars will truly be put to the test once league play begins.

And yet, Bordman is looking forward to what lays ahead. “We’re excited and ready for the challenge of this season,” he reveals, “and I think we’ve got a lot of weapons both offensively and defensively that can make a difference.”

As of now, the Cougars are expected to begin practice in mid-December with their 10-game schedule commencing on January 8 when they will make their way across town to take on neighbor Orange Glen in what should be a most intriguing opener.

Normally at this time of year, Esco would already have competed in a number of games and be fully immersed in the meat of its schedule. But COVID-19 has dramatically changed the California prep football scene and pushed the usual timeline way back.

As this is being written, there is no campus schooling going on at Esco. As a result, the only connection Bordman has with his team is by virtual mode via Zoom. The coach readily admits that not having any direct personal contact with his charges creates for a much different dynamic. “When you don’t see and interact with the guys every day, it just isn’t the same,” says Bordman. “It’s obviously harder to get a read on all that they’re feeling and experiencing.”

While the Zoom sessions do offer a chance to focus on some football-related items such as studying film and installing plays, the main purpose behind them is to simply reach out to the players and maintain some sort of connection. “Really, the football side of it is minor,” says Bordman. “The biggest thing is to just check in with the kids and see how we can help them in any way possible.”

After every grading period at Esco High, the situation as it relates to having students back on campus is reevaluated. Given these uncertain times, nothing is guaranteed but Bordman hopes that sometime relatively soon restrictions will be loosened, students will return to class and his gridders will get the green light to begin on-site weightlifting and conditioning workouts.

But regardless of how the lead up to the season unfolds and as long as plans to eventually play aren’t scuttled by a coronavirus spike, there are plenty of reasons to believe that the Cougars can put together another successful campaign.

In experienced quarterback Robbie Ramos, Esco has a bona fide leader who can truly ignite an offense. At 6-1 and 200-pounds, Ramos not only possesses a powerful arm but his uncanny knack for extending plays and escaping the pocket is a huge asset. Smart and a real student of the game, Robbie’s burgeoning ability to read defenses is another plus. Last season Ramos threw for 1,808 yards, rushed for 349 more and combined for 22 touchdowns. In this his senior season, look for Ramos to definitely eclipse those numbers and be a force that should present plenty of problems for enemy defenses.

As for targets, Ramos has one of the County’s very best in 5-foot-11, 150-pound wideout Tajae Brooks. A terrific vertical threat because of his blazing speed, Brooks has the potential to take it to the house anytime he gets his hands on the ball. And when he’s not flat-out blowing by defenders, this shifty receiver can make them miss; thereby racking up an abundance of yards after the catch. Because he’s such a dynamo in space, expect Bordman to move Tajae around in various formations so that the opposition will have even more trouble tracking him. Confident and as exciting as they come, Brooks is a gamebreaker definitely worth the price of admission.

Yes, the running game will surely miss the talents of the graduated Matt Malone but others are poised to step up and be counted. One of those expected to be heard from is Abraham Perez, a strong ballcarrier who is tough to tackle, can move the pile and owns enviable speed. Someone else to keep an eye on is junior halfback Gavin Briceno who is up from the JV.

Meanwhile, look for hybrid Brody Mossbarger to do some damage both toting the rock and as a slot receiver. A fearless competitor and tremendous teammate who displays great vision and reads what’s in front of him, the senior Mossbarger is capable of making things happen.

As for the offensive line, consider it to be a strong suit. Known for its physicality, love of the game and skill at opening holes, this group is champing at the bit to prove its worth. Anchoring things upfront will be 6-4, 265-pound right tackle Nate Davidson, who has already garnered the interest of several D2 and D3 college programs. Rugged, heady and with a long reach, Davidson is a difference-maker at the point of attack and his ability to pick up stunts borders on the masterful.

And don’t think for a moment that the Cougar defense intends to take a back seat to the offense.

A physical and hardworking D-line is a unit that seems ready to shine. Tasked with setting the tone in the trenches will be 240-pound junior Max Mendez. Exceptionally strong as well as fast for his size, Mendez has the versatility to play effectively both inside and on the edge.

Jump back a level and you’ll find the defense’s field general in Jesus Fraga. A seasoned weakside linebacker, Fraga is a conspicuous leader who sees to it that his teammates are properly aligned on the field. A quick mover with an undeniable nose for the ball (89 total tackles in 2019), Fraga is as rock-solid and reliable as they come.

And though the secondary will miss the steadying influence of veteran safety Elijah Joyce who moved to Florida, the Cougars nonetheless have an athletic cornerback in the 6-3 Kevin Gash whose upside could make him a linchpin on the back end.

So when you put all of those pieces together, continuing to raise the bar as a team seems quite realistic. The question then becomes, how high can that bar actually go? Sometime in the near future, Bordman and crew should start providing the answer.