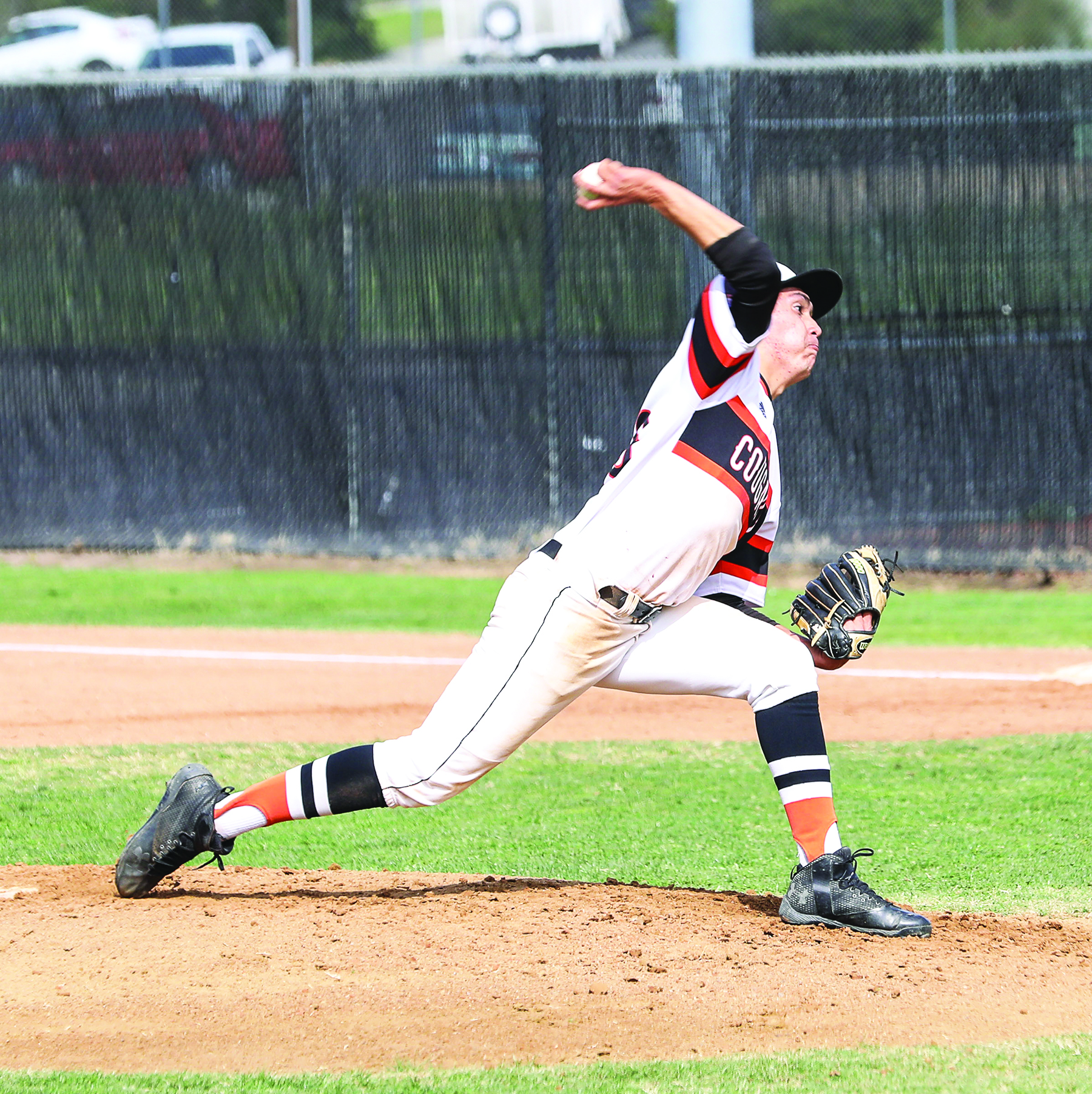 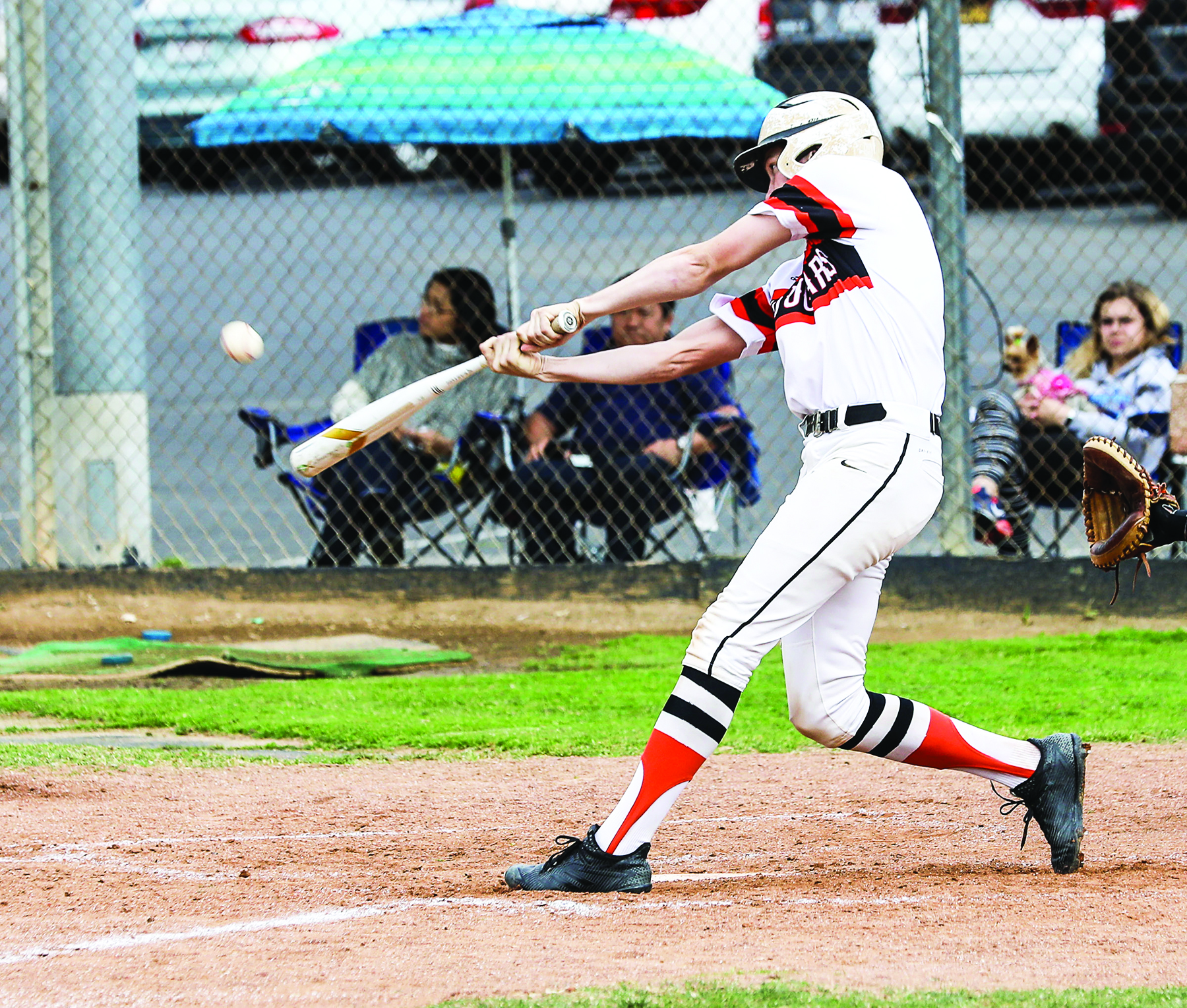 Esco catcher Shawn Moskowitz makes solid contact on this first-inning single, one of only three hits the Cougars could muster off of SC lefty Jake McAllister.

Escondido ace right-handed pitcher Juan Cervantes couldn’t have done much more, unless he had been darn near perfect during Monday afternoon’s game versus visiting Sage Creek.

By the time the last out had been recorded, the junior Cervantes had hurled a complete game, yielded just an unearned run and four hits while striking out six and retiring 11 of the last 13 batters he faced. Moreover, the returning first-team All-leaguer (Valley) seemingly grew stronger as the game wore on, the velocity of his pitches clearly ramping up.

“He was brilliant,” praised his coach Aaron Hoofard. And Cervantes was quick to point out that it was definitely his best outing of the season so far. “My fastball and curve were really working,” conveyed the soft-spoken youngster who was named to the Union-Tribune’s preseason players to watch list.

Sounds like the perfect formula for a Cougar win, right? Well, not so fast because there was a fly in the ointment courtesy of Cervantes’s counterpart, southpaw Jake McAllister. As good and dominant as was Cervantes, the senior McAllister was just a shade bit better. Allowing just three hits, effectively mixing his repertoire of three pitches (fastball, curve and changeup) that resulted in eight K’s and exuding a confident vibe on the mound, McAllister spun an impressive shutout that keyed the Bobcats 1-0 win.

With the victory, Sage Creek ran its seasonal record to a glossy 9-2 while the Cougs saw their overall ledger slip to .500 at 6-6.

When asked for his appraisal about how the contest played out, Hoofard had an immediate response. “Neither team could hit,” he quipped and left it at that.

Maybe it was more than fitting that, based on the subsequent pitching excellence from both sides, the only run of the game came without the benefit of a hit. With one out in the top of the first, Bobcat shortstop Scott Anderson coaxed a walk off of Cervantes. Then, after getting a great jump from first, he proceeded to steal second base. But Anderson’s ambitions on the basepaths had hardly been satisfied and soon after he was taking off for third, hopeful of yet another theft. And not only did his speed and anticipation allow him to cop an additional base but when the catcher’s throw airmailed third sacker Brenden Garcia, Anderson scampered home with the lone run that ultimately prove to be the difference.

The only other time that Sage Creek really threatened came an inning later when the Bobcats reached Cervantes for three straight singles. But the Esco righty made a superb pickoff throw that nailed Garrett Taylor before he induced Bryant Kitisin to rap into a force play that got the Cougs out of trouble.

Twice in the game, Esco got two runners aboard in the same frame but McAllister managed to bear down and get the clutch out when he needed it. In the first inning after Cervantes drew a base on balls and Shawn Moskowitz drilled a single into centerfield, the crafty McAllister got Garrin Jackson to sky a towering foul out to first that brought matters to a close.

And then in the third inning, the Cougars would have their last, best chance. A one-out walk to Garcia was followed by a drilled shot between short and third courtesy of Cervantes, who seemingly was doing it all on this afternoon. However, McAllister remained poised and escaped unscathed when he produced a pop out before pumping a heater on the inside corner that caught Jackson looking.

From there, McAllister’s arm did the rest. He would author three straight one-two-three innings heading into the bottom of the seventh where Victor Seneres’s two-out walk snapped McAllister’s streak of having retired 13 consecutive hitters. But that only momentarily delayed the inevitable and when the SC lefty got Diego Manriquez to reach out and send a fly to right, the game was put away and his shutout gem was secured.

The season thus far has been a mixed bag for Cougars, who have enjoyed a five-game winning streak but then endured a losing skein of the same length. But given the team’s relative youth, perhaps that kind of fluctuation isn’t all that surprising. “We’re really young,” said Hoofard, “and this is a team that’s still learning how to win. We’ve only got three seniors to go along with four or five sophomores and the rest being juniors. But if we can get our hitting to come around, we should do all right with (Valley) league play coming up.”

Hoofard’s talented pitcher Cervantes is certainly one who seconds his coach’s observations. “If we can work on our hitting and get a little tighter on defense,” says the Esco standout, “then we should be fine.”

If Cervantes continues to deal as he did on Monday afternoon, things should definitely be copacetic. That is, as long as the Cougs don’t encounter a masterful stopper like McAllister very often.