The Escondido and San Pasqual High basketball teams each had their own agendas entering last Friday night’s contest held on the Cougars’ home court.

For the Cougs of coach Paul Baldwin, the aim was to move their overall record into the plus column while at the same time, solidifying their status as the only unbeaten team in the Valley League.

As for the Golden Eagles, their goal was to continue reestablishing the viability of the program and to build upon an impressive upset win over respected Valley Center in their previous encounter.

Each team certainly had a lot to play for and motivations aplenty to keep them fully engaged. But by the time the final buzzer had sounded, it was the Cougars who had made a most emphatic and definitive statement.

Ignited by five players who scored eight points or more, a 2-3 zone defense that swarmed and hounded the opposition and an aggressive mindset that saw the Cougars continually attack the rim, Esco rolled to an impressive 65-33 triumph over their city rivals. With the victory, the Cougs upped their seasonal slate to 11-10 while remaining atop the VL standings with a perfect 3-0 mark.

Meanwhile, the Golden Eagles saw their overall ledger fall to 5-15 and 1-2 in the VL. 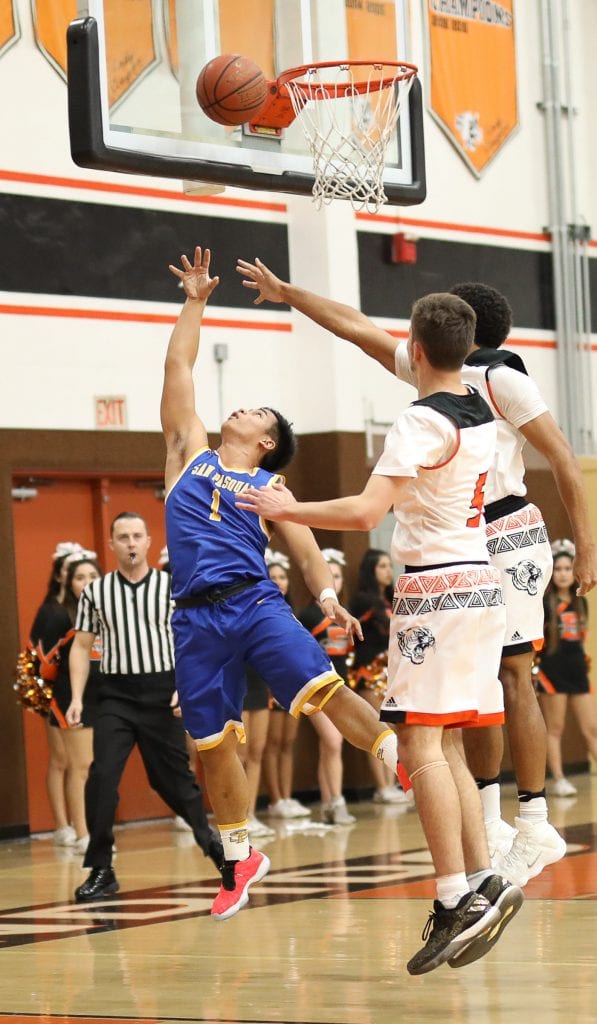 Golden Eagle Raymond Rodriguez, who finished with 11 points, gets off a reverse layup. 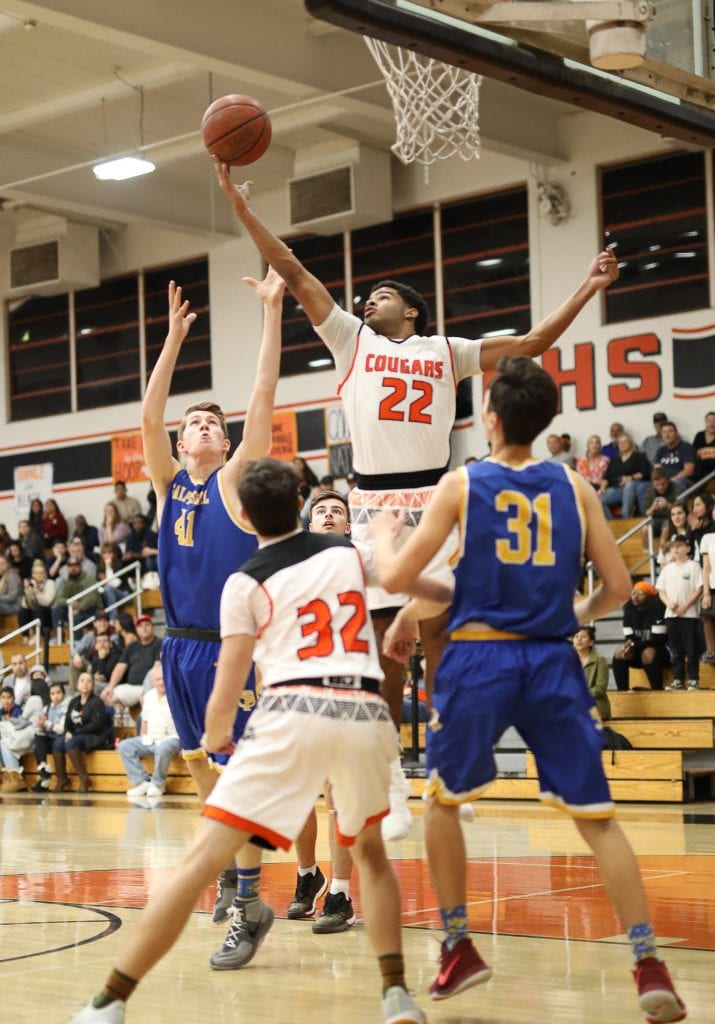 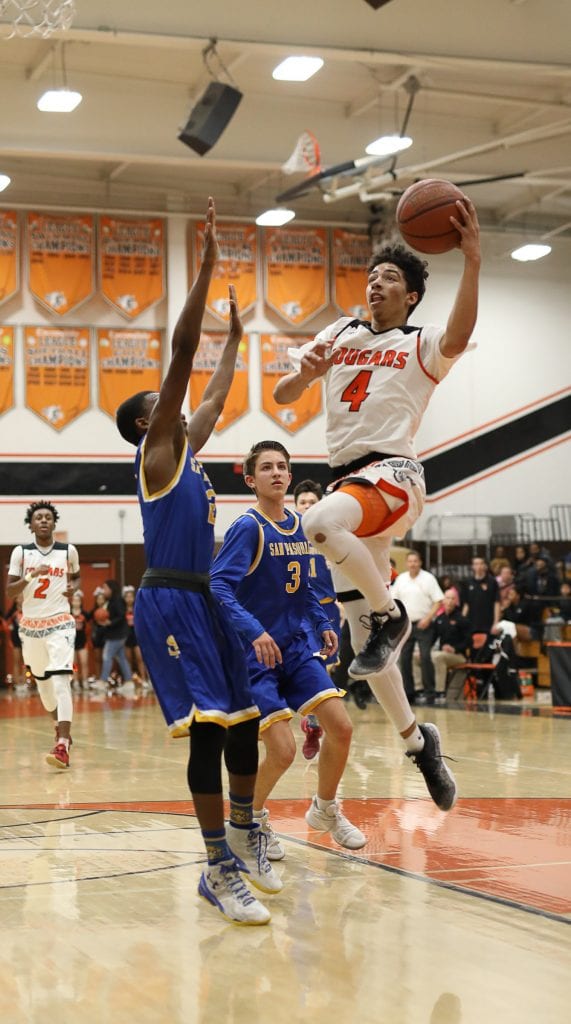 As he did all night en route to a team-leading 16 points, Haikeem Barber takes it to the hole. Photos by Lenny Kerbs

This was to be a game that saw a tight first quarter with neither team particularly sharp, a second stanza in which Escondido began creating separation and then a dominant third period in which the Cougars came out on fire and totally blew things open. Esco would continue to pile on the points in a final quarter that saw numerous substitutes on both sides given the chance to log some playing time.

This game’s outcome was resolved when the Cougs scored 19 of the first 21 points coming out of the halftime break that would staked them to a sizeable 53-24 margin entering the final quarter.

Smooth forward Haikeem Barber, who would finish with a game-high 16 points, was the clearly the catalyst during this decisive surge. In addition to a pair of assertive layups, the 6’0” senior scored on a sweet tip-in, a nice follow shot and finally a rhythmic pull-up jumper from the baseline.

Junior guard Jacob Hutchinson was another key factor at this juncture. Besides three driving layups that highlighted his obvious athleticism, “Hutch” also knocked down a free throw.

Joining Barber in putting up double-digit scoring for the Cougars were forwards Ryan Green (13 pts.) and Justin Fox (11 pts.) The senior Green – who is smart, hardworking and dependability personified – was particularly effective in the second quarter when he went hard to the hoop for one bucket, netted a nifty scoop shot and then tallied on an artful floater in the lane.

For his part, the active Fox who brings plenty of energy to the task at hand, did some notable scoring from inside. Moreover, the resourceful sophomore nearly brought the house down when he got out on the break and finished things off with a resounding two-handed slam dunk.

Two other Cougars were also important contributors. Junior Chris Landry (8 pts.) not only factored on the score sheet but he was his usual aggressive self on both the boards and at the defensive end. And then there was burgeoning sophomore Jacob Sauls, who not only chipped in with points and showed some offensive wherewithal but also really made his presence felt at the defensive end – including a sensational block in which he stuffed the shot and then instantaneously gathered it in.

Though it was hardly a memorable night for the Golden Eagles, the fact remains that this squad has shown decided improvement and legitimate progression and growth from its winless campaign of last season.

In point guard Raymond Rodriguez, who paced SP in scoring against the Cougs with 11 points, the G. Eagles have a solid ballhandler who can penetrate to the hole as well as really stroke it from downtown.

Armed with some nice moves in deep and coupled with his willingness to compete at both ends, center Ammon Scott is another bona fide asset for SP. Plus, senior Luke Dubois can be a genuine factor with his bruising style and ability to deliver tough points from underneath. And don’t sleep on boyish-looking guard Nikola Danilovic, who possesses considerable range and can be a real threat when he’s got it going from the outside.

Yes, the G. Eagles are beginning to flap their wings a bit as they attempt to rise from ground zero and become ever more competitive. The fact that they have put together some solid wins and have beaten a quality league foe like the VC Jaguars indicates that they’re certainly on the right track. The balance of the season will be all about getting better each and every day, constructing a solid foundation and building towards a brighter future.

As it relates to the Cougars, their ambitions are geared more toward the here and now. Sitting atop the VL, Esco could advantageously position itself for a league title if it can hold serve when playing host to second-place Valley Center (2-1) on January 31. It figures to be the showcase matchup of the league so far. Win there and the Cougs will be the odds-on favorite to cop the circuit title.

VC will get a true test trying to stop the dangerous Cougars. San Pasqual can fully attest that for the Jaguars, that will be no easy task.