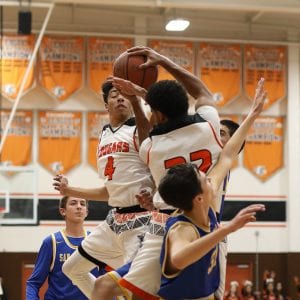 If the Cougars are to make a mark in the postseason, Haikeem Barber (4) and teammate Chris Landry, shown here converging on a rebound, will have to play major roles. Photo by Lenny Kerbs

On Wednesday, February 14, the Escondido High boys’ basketball team lost a battle. But two nights later, they won the war.

After coming up short against Valley Center in a marquee matchup that saw the Cougars’ hopes for an undefeated Valley League season go up in smoke, head coach Paul Baldwin’s team put the hammer down as expected by dispatching San Pasqual to capture a meaningful VL title.

With their decisive 88-55 Friday night victory over the Golden Eagles, the Cougs finished the regular season with a solid 15-12 overall mark but more importantly, earned the right to call themselves VL champs having won seven of eight circuit games, the lone blemish being a 63-56 setback suffered at the hands of the unpredictable but dangerous Jaguars.

Now Escondido prepares for its journey into the Division II playoffs where as the No.12 seed, it will travel to the home gym of Otay Ranch (No. 5 seed, 16-10) on February 20 for a challenging matchup versus a squad that finished tied for third in the Mesa League.

And if you listen to Jag coach Jon Jones, the Cougars have the potential to be a real threat in the postseason. “They’re very consistent,” praises Jones. “They play hard and compete every night. Also, they are very well coached. They’re definitely a good team that could make a run in Division II.”

The contest between the Esco and VC is worth revisiting because it held such serious implications. For the Cougars, it presented a chance to maintain a spotless record in the VL and lock up the circuit championship.

As for the host Jags, there was much to motivate them as well. Aside from being given the chance to avenge an earlier 75-60 loss to Escondido, VC could also draw within a game of the Cougs in the VL standings and keep its hopes alive for sharing a league title with a win. Needless to say, there was plenty at stake for both sides.

The first quarter ended with the Jags owning a 13-10 lead when guard Kamin Davis hit a step-back three shortly before the buzzer. As it turned out, the only lead the Cougs would hold the entire night came a bit earlier when athletic guard Jacob Hutchinson drained an artful runner in the lane that put Esco in front 10-8. Hutchinson, who also tallied on a nice steal and dependable forward Ryan Green, who scored on a hustling follow shot and a sweet little flip, were the prime reasons that the Cougs stayed close.

In the second period, Esco was able to tie things up at 15 when Green neatly went off the glass but from there the Jags outscored the visitors 11-4 to take a seven-point lead at the half.

When active forward Justin Fox parlayed a steal into a hoop from underneath right after intermission, the Cougs had narrowed the margin to within five but they were destined to get no closer. An assertive layup by VC’s talented freshman Mickey Chew brought the count to 42-31 at the end of three quarters.

And it appeared as if matters were all but decided when Davis tallied six straight points that expanded the Jag cushion to a sizeable 50-36. However, the Cougs had no quit in them and commendably fought back with one final push. Fox got things started with a conventional 3-point play that resulted from a determined follow-up and charity toss. Now it was Hutchinson’s turn to step up and did he ever by converting two hard drives to the hole into four free throws. And when Fox tacked on another point from the line, the Cougs were suddenly back in the hunt trailing only 50-45 with 3:44 still remaining.

But then came the dagger. The precocious Chew calmly drilled a huge trey from way downtown that clearly blunted the Cougar momentum and triggered a seven-point VC run that helped put the game away.

For the victorious Jaguars, it was the versatile Davis who led the scoring parade with 23 points while power forward Kobe Dominguez and Chew added 13 and 12 respectively.

Much to their credit and as an example of their maturity as a team, Esco allowed no negative carryover from the disappointing defeat to the Jags. Going into their contest with San Pasqual as prohibitive favorites, the Cougs emphatically took care of business, cruising to a convincing triumph that brought them a coveted league title.

Now, it’s onto the playoffs where the Cougars could be a real threat should they get on a roll. There’s no disputing that the pieces are in place to do some postseason damage. In Green, the Cougs have an experienced, clutch and bona fide weapon. Forward Chris Landry possesses the heart of a lion and can get it done with his scoring and yeoman work on the boards. Fox is now providing another legitimate option at the offensive end. When he’s right, talented Haikeem Barber can excite and light it up with his smooth forays to the basket and rainbow bombs. And then there’s “Hutch,” a gifted guard who can dish, defend, handle the rock and put points on the board in a number of different ways.

If they are able to play at anywhere near their optimum level, the Cougars could be making some postseason headlines.

On Friday night, the Cougs won a war of sorts but now another campaign awaits them – that of the playoff variety. Baldwin and crew seemed well positioned to secure even more significant victories going forward.