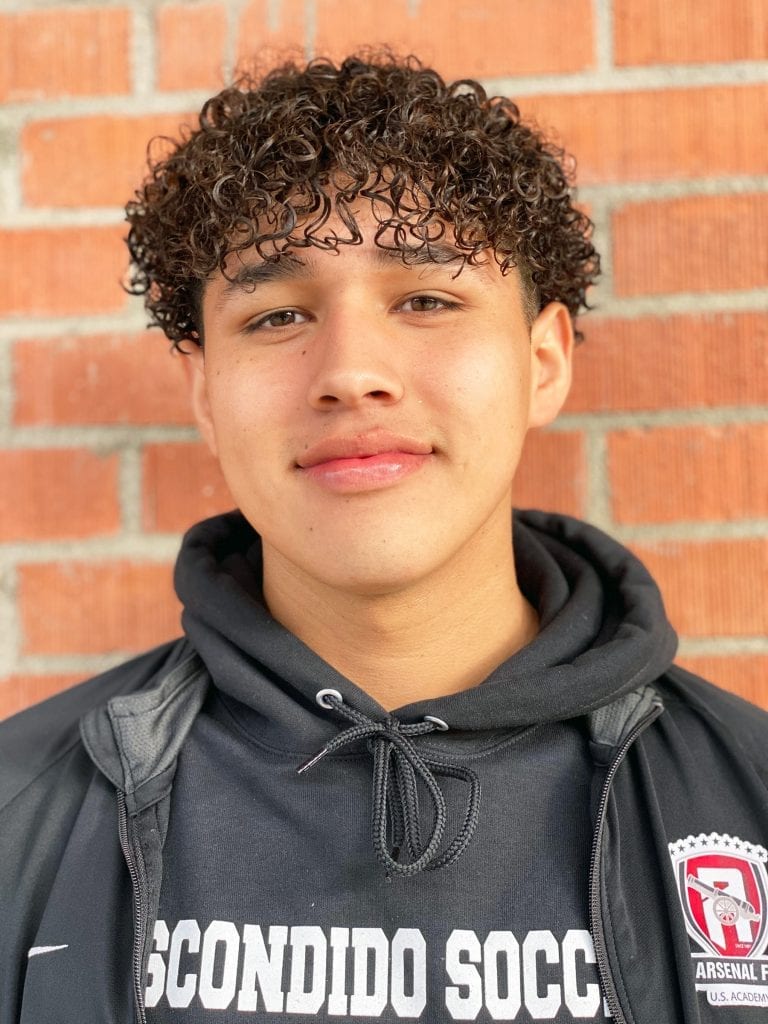 Cougar striker Damian Flores was a scoring juggernaut, whether during the regular season or in the playoffs. Photo courtesy of Michael Mendoza

Last Saturday afternoon on the pitch at Mission Bay High School, the Escondido High boys’ soccer team experienced the keen disappointment of a heartbreaking loss and the epitome of a near-miss.

Having forced overtime in the San Diego Section Division III championship game versus a stout Patrick Henry club, the Cougars saw their dreams of title glory dashed when nearly ten minutes into the extra session, Julian Garcia calmly directed a close-in shot past Esco goalie Juan Martinez that gave the Pats a dramatic 2-1 victory for their first section crown since 1998.

The hometown Cougars entered the fray with a sparkling 18-3-5 overall record, a tournament win and the No. 1 seed in the Division III ranks. As for the Pats, their resume was just as impressive thanks to a 16-3-5 ledger, a City League crown, a pair of tourney titles and the designation as the second-seed.

Based on their respective standout seasons, the game figured to be a barnburner and it more than lived up to those expectations. Hotly contested with plenty of back-and-forth, PH got on the board first when Henry Jonathan Moreno tallied in the 13th minute to stake the Pats to an early lead. But it didn’t take the Cougars all that long to respond and just four minutes later, midfielder Cesar Bahena delivered the equalizer by neatly beating Pats goalie Aaron Jimenez (5 saves). And that 1-1 count stood for the remainder of regulation time and into overtime until Garcia embraced the hero’s role by getting the better of the gutsy Martinez (7 saves).

“I was proud of the way our guys fought and competed,” said Esco head coach Michael Mendoza, whose impressive stewardship of the Cougars was a huge reason for the team’s remarkable success this season. “Really, the game could have gone either way but give them credit. They’re a really good club and they were very good tactically. They also had some big and tall athletes that won a lot of air balls.”

Though Esco’s playoff run came up just short, it was nonetheless one to remember. Given a first-round bye because of their high seeding, the Cougars got things rolling in the right direction with a 2-0 quarterfinal triumph over eighth-seeded Sweetwater. Esco rode the goals of striker extraordinaire Damian Flores and gifted forward Yahir Diaz as well as the solid goalkeeping of Martinez (5 saves) to the victory.

Next up was a semifinal encounter with a 20-4-4 Hilltop squad (No. 4 seed) that had ruled the South Bay standings and was tough as nails on the road. And late into the second half, the host Cougs were clearly up against it, trailing by a 3-1 count with less than seven minutes remaining. But then the clutch Flores produced his second goal of the game to narrow the deficit to one.

That set the stage for captain/forward Willy Felipe to demonstrate his clutch gene with a lasered free kick that went topside and found the back of the net. Felipe’s timely late score sent both the home crowd as well as his fired-up teammates into an absolutely tizzy. From that point on, it seemed as if there would be no denying the Cougars.

Riding a wave of emotion as well as momentum, Esco continued to press the attack in the overtime and it was there that senior mid Erick Soria earned for himself a place in Cougar lore when he authored the game-winning shot that sent his club to the championship finals – where the Cougs would come ever so close.

When asked to mention some of the team’s top playoff performers, Mendoza was hardly at a loss, the names spilling out of his mouth. He called center back Angel Cortez a magnificent defender. The coach saluted Diego Rios for being an unstoppable competitor. More plaudits were heaped upon Diaz, Bahena, Alfredo Reyes and Felipe for their tremendous commitment and effort. Raymond Ramos was also praised for his skillful defensive work. Goalkeeper Martinez’s reliable and solid presence in the net had also been noticed.

And then there was the wondrous Flores, a veritable whirlwind of a player who shone in the postseason as he had beforehand, scoring an amazing 34 goals throughout the entire campaign. “It was no coincidence that whenever he scored, we either won or tied,” informed Mendoza.

Though a bit wistful about not being able to quite climb to the very mountaintop, Mendoza will always have fond memories of his 2019-20 club. “It was a group that helped set high expectations, wanted to play and didn’t like losing,” said the coach. “They made it a priority to adopt a winning mentality.”

Thanks to the positive culture that Mendoza and his CIF runner-up team created, the Cougar program now seems positioned for sustainable success. And with 16 varsity players returning next season plus some additional help expected to be promoted from an unbeaten jayvee club, the Cougs could be scary good once again.

But they’ll be severely challenged to match the terrific results turned in by this year’s memorable squad. Except for the fact that a coveted title barely eluded them, it really doesn’t get much better than what Mendoza and his gallant charges brought to life on the pitch.