Cougar hoopsters look to step it up 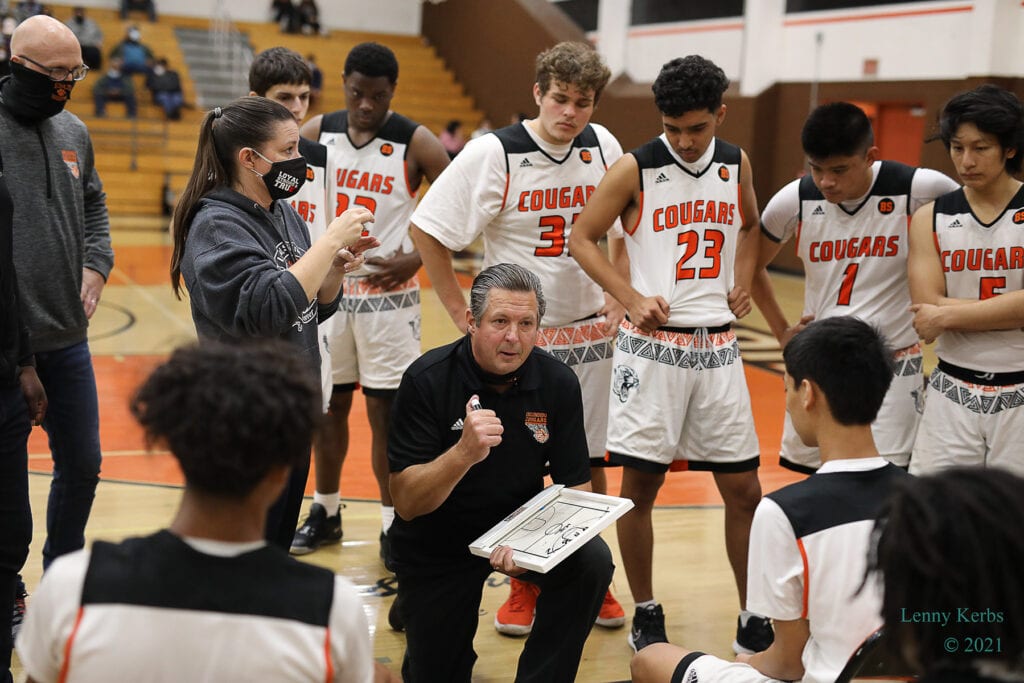 Accomplished Escondido coach Paul Baldwin is doing his upmost to get the Cougars back on track. Photo by Lenny Kerbs

Up to now it hasn’t been the best of times for the Escondido High boys’ basketball squad.

Due to a myriad of circumstances that conspired against them, this unprecedented 2021 spring season has proven to be a substantial challenge. Currently, Esco owns a 3 and 8 record and the question is can the Cougars turn things around and make their customary strong push down the stretch? At present, it’s hard to make a prediction one way or the other.

Among many other admirable qualities, accomplished Cougar head coach Paul Baldwin is a straight shooter. He’s never has been afraid to tell it like it is whether his club was riding high – which has generally been the case – or was finding the going tough.

So when asked to evaluate the Cougs’ present situation, he minced no words. “We’ve been struggling,” he said. “We should be better and we’ve got to find a way to get up to speed. Right now, it just feels like we’re somewhat behind.”

But in fairness to Baldwin and his team, they have had to deal with more than their share of obstacles.

Without a doubt, the coronavirus has left its mark on Esco. Unable to do little more than some limited conditioning and individual skill work for 13 months – and with literally no team-oriented workouts during that period – the Cougars aren’t anywhere near as far along as they would normally be when it comes to cohesion, fully understanding their roles and having developed a sense of confidence.

Plus, before the season even began they lost a pair of transfers, one of whom was unquestionably a significant piece of their puzzle. Solid all-around guard E.J. Pyers ended up leaving for Liberty High School in Peoria, Arizona in great part because of the uncertainty as to whether California would even have a prep hoop season. It’s no exaggeration to state that Pyers is sorely missed and that Cougars’ fortunes might be decidedly different if he was still wearing an Esco uniform.

Moreover, though the roster now numbers 13 players with the additions of footballers Robbie Ramos and Ben Massie –unavailable until they completed their gridiron duties – Esco has at times been shy of personnel for a variety of reasons. For example, at one practice the Cougars were down to four players while for one game only seven athletes suited up. A knee injury to standout guard Julian Hutchinson also briefly affected his availability.

Ordinarily, the Cougars would have had opportunities in the spring, summer and fall of 2020 to get together as a group and then launch into a season that commenced in November and ended in February of this year. Deprived of all that beneficial interaction and with plenty of new faces on the roster, it’s hardly surprising that Esco has scuffled somewhat, with its ball movement, fundamentals and execution at running plays not quite up to snuff.

And yet, being able to participate under any circumstances has been a positive because for the longest time it looked like prep basketball in the “Golden State” was all but dead. Its prospects were highly dubious given that the sport is conducted indoors. The decision to go ahead came at such a late date that Baldwin had nine days to compile a schedule, a process that normally takes months. “I’m just happy that the guys can play,” says Baldwin. “I want them to have some fun and we feel fortunate to have any kind of season. This really is all about the kids more than anything else.”

Though some have taken to calling this the “asterisk” season because of its timing, scheduling quirks and other variables, that doesn’t mean Baldwin’s desire for victory has diminished. “Yes, this year has a completely different feel to it,” he shares, “but we’re competitive people and that hasn’t changed. When the ball is tipped off, we definitely still want to win.”

And though it hasn’t been a smooth ride to date, don’t discount the possibility that the Cougars could gain some traction and become a factor in Valley League play, a circuit in which Esco has won an amazing 34 of its last 38 games.

To begin with, Baldwin is a knowledgeable and hardworking coach who has proven on many occasions that he can motivate his charges to elevate their game. Moreover, Esco has some talented players with the potential to orchestrate a resurgence.

It all begins with Hutchinson, the one hoopster the Cougars simply can’t do without. A three-year starter and all-league performer, “Hutch” has a noteworthy and diverse skill set (12 ppg, 5 rpg, 5 apg). Imbued with a great handle, the 5-9 senior has ample shooting skills and is an effective penetrator who can either finish at the hoop or kick it out to an open teammate. Difficult to stay in front of while on offense, Hutchinson is also a terrific on-the-ball defender and his rebounding knack is clearly on the plus-side. Considered a quiet young man, the Cougs might need Hutchinson to become more of a vocal leader if they are to truly reach their potential. 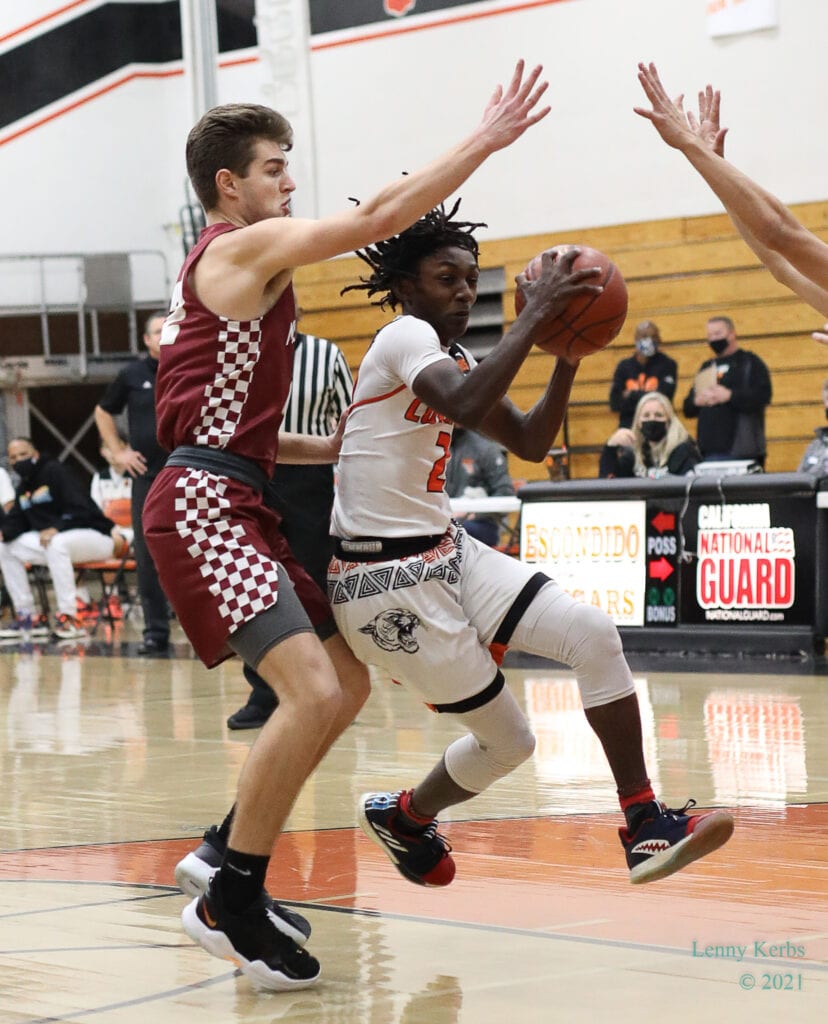 When it comes to scoring, expect shooting guard Nicholas Payne (17 ppg) to be a go-to option. Payne can be a handful given the myriad of ways he’s able put the ball in the basket. Not only can Payne nail the trey but dropping home a floater is also part of his arsenal—as is finishing at the rim. And though point production is his calling card, Payne can definitely get after it on the glass and become a solid rebounder (5 rpg). How good can this gifted junior be? Well, Payne was last year’s Valley Player of the Year and that’s says plenty. He’ll more than likely have to rise again to that level if the Cougs are to experience a breakout.

Senior Robbie Ramos, a dynamic dual-threat quarterback, brings a lot to the table when it comes to hoops. Ramos is a competitive, athletic and physical player who fits the power forward position to a tee. Not only does the 6-1 Ramos defend the post but he can also harass shooters on the perimeter. Versatile enough to be an offensive factor from both behind the arc and with his back to the basket (8 ppg), grabbing a passel of caroms (9 rpg) is another Ramos forte. In short, Ramos knows plenty about the game though he may not pick up a roundball for months due to his football commitments.

And while there’s no arguing that Hutchinson, Payne and Ramos represent Esco’s biggest weapons, four others must play vital roles. In Isaiah Orange, the Cougars have a wing who can really shoot it when he’s on as evidenced by a 19-point outing earlier this season. Warren Naval can also be a deft marksman and don’t sleep on his defensive upside. The hustling Ben Massie has the wherewithal to be a force on the boards, block out opponents and set impactful screens. And finally there’s the inspiring story of Dylan Eveland; a bruising senior who—despite being deaf—is making a significant contribution not only with his dependable rebounding (5 rpg) but by doing a little bit of everything, including scoring (7 ppg).

Because Baldwin has been searching high and low for answers, most everyone on the roster has had an opportunity to log some playing time and catch the coach’s attention. As many as 12 players have seen action this season. But Baldwin has long preferred a rotation that goes no deeper than eight or so and it’s his intention to hone in on that number as quickly as possible. “I need to figure out who can play and who gives us the best chance to win,” he says candidly.

For the past four seasons, Baldwin and the Cougars have ruled the roost in the Valley League. However, given the current circumstances, Esco will have to experience a definite surge to remain league kingpins.

Nonetheless, Esco showed signs of a possible reawakening with a hard-fought 53-48 home victory last Friday night over Mt. Carmel, one of the VL’s tougher foes. In that contest, Eveland had a huge night with 16 points and 8 rebounds while Ramos also went large on his way to a notable double-double (10 pts., 10 boards).

Should the Cougs be able to split a pair of upcoming games this week versus formidable Ramona, they very well might force their way into becoming a VL contender.

But rather than concerning himself too much with upcoming opponents, Baldwin is instead focused on getting his own club squared away. “I’m more worried about us than anything else,” he said, “because we won’t be going anywhere if we don’t make some necessary adjustments and corrections.”

Baldwin continues to provide the straight talk. He won’t sugarcoat Esco’s present predicament. He knows what the club is up against and what it will take to alter the dynamic of this unique spring season.

Yet, never underestimate Baldwin and his players. If they can mesh their efforts and get the pieces to fit together, they can still make some noise. Thus, it’s going to be mighty interesting to see if Esco can discover a winning formula in the days ahead. But that will have to happen postehaste because the Cougs know full well that the time to step it up is rapidly running out.