Consuelo Martinez looks back on first year in office 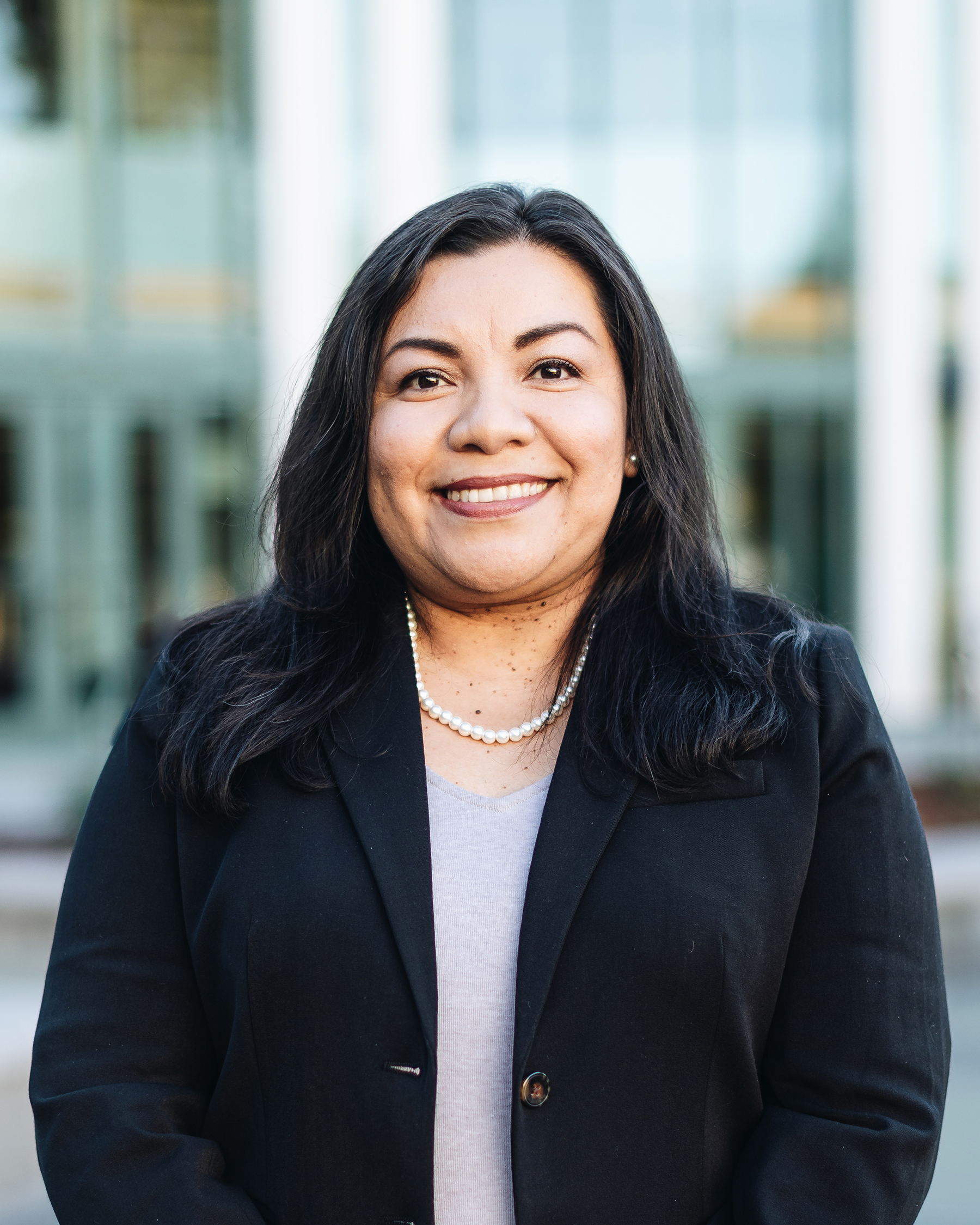 For Escondido councilmember Consuelo Martinez, her first year in office has been both humbling and liberating. She has found that the experience of being on the other side of the dais helps her empathize with those who just want someone to listen.

“I don’t do this for accolades,” says Martinez, who in her first year was also designated deputy mayor, a largely ceremonial title that nevertheless paired her many times with Mayor Paul McNamara, who was also elected in 2018. “I read all my emails and respond to all my emails. That’s very important to me.”

The majority of emails have been very positive, she says.

Martinez made a point of not making promises when she ran for her District 1 seat. But she did set a goal to have roughly one community meeting a month. “I find that in district meetings are better than town hall style meetings with an agenda. People can come in anytime and ask me anything. It’s a good way for everyone to get their ideas across,” she said.

Another thing she is very proud of is of convincing the council majority to change the meeting time from its old 4:30 p.m. time to 6 p.m., when more people are off work and can attend.

She put this proposal on the agenda, and it passed. She believes that more people are attending council meetings as a result. “It ebbs and flows but no one can argue that it’s not a more convenient time for most people. The fact that we allow that makes it possible for more people to participate, when they need to and when they want to. That’s the goal.” said Martinez. “It’s happening around the region as well. A lot of cities are starting after 5 p.m. We have a lot of traffic and it allows them more time to get here. So far it’s been good. I haven’t heard any complaints. Staff still shows up, people show up, the council shows up.”

One thing she was surprised that she could influence was the location of the MFRO (Membrane-Filtration Reverse Osmosis) plant. She convince other councilmembers to move from its location from Ash & Washington—next to a senior residential area— to another city-owned property at 901 W. Washington Ave., which is within her district.

When she was campaigning for office, people from that neighborhood frequently approached to ask her to oppose it. “I participated in the resident engagement meetings at the time (in 2017) the project was being discussed. I  remember thinking, ‘Wow! Why not look at another location?’  There were other locations that hadn’t been explored to the fullest.”

When she  took office the council had already voted on it. At first she thought it was set in stone. “And then I was reading the weekly reports and read they were going out for bid and hadn’t broken ground.” She said, “There may still be time!” She asked to revisit the site and ask some questions. “I knew staff knew I felt strongly about putting it in an industrial area,” she said.

She persuaded the majority to move the MFRO to the industrial area. “I was happy we were able to keep the grant, and do everything we could not to delay the project. I think it’s a win, win,” she said. “We will still have the MFRO and I’m already looking for something else for that area that would be a huge benefit. It’ll have to do with recreation and something for the community. I feel it’s a perfect location. I will work hard to find an alternative use. It’s near businesses and families. In front of Round Table Pizza. It’s near the creek. It has a lot of potential!” 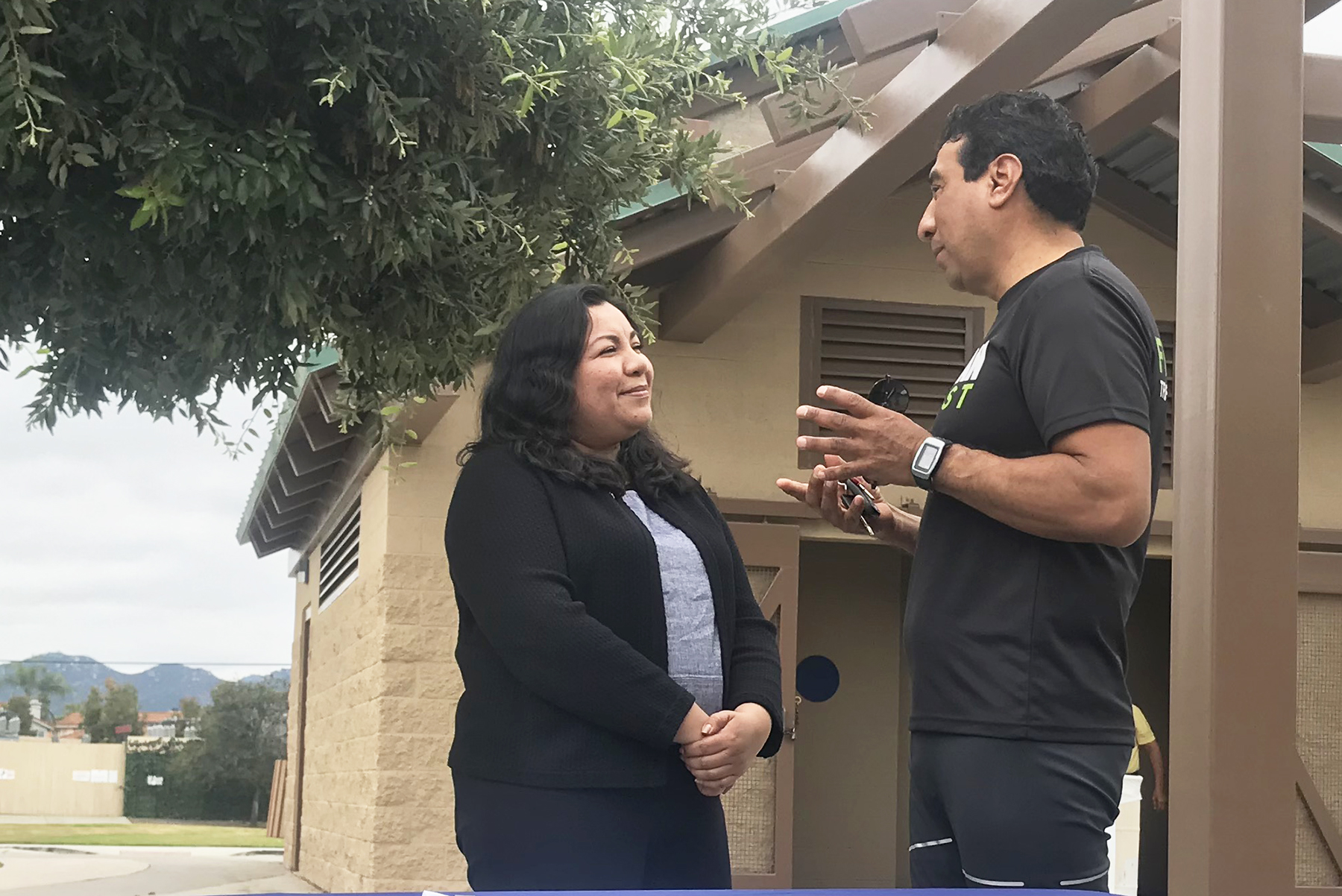 Consuelo Martinez listening to one of her constituents at her first in-district meeting.

Martinez’s background is in community organizing and leadership development. She is a leadership trainer for a non-profit in San Diego: Mid-City CAN (Community Advocacy Network).

“I learned a lot in my first year and a lot of people were nervous with me coming on board. I’m not new to the community. Land use has been my biggest learning because that was not my background. My first year has been one of learning and I believe it will continue to be because as leaders we must keep learning.”

Meantime she is building relationships with staff, getting to know the different departments and what they do. “I think having a good working relationship is the key to success as a policy member. Staff has expertise and I have expertise and it’s important to share that with each other. It can’t just be a one-way street,” she said.

That is also true for her council colleagues. “It’s important to be respectful to each other,” she said. “We were all elected. We all represent various constituencies. Escondido is diverse in many ways. Building relationships with my colleagues and staff is important to me.”

She adds, “I think it’s important to be humble, especially in your first year. The year has really flown by. I think what makes me proudest is I am changing the conversation and I appreciate that staff asks my input.”

Assistant City Manager Bill Wolf, who is in charge of parks and recreation, knows that she is very passionate on this subject. He will bring her ideas and ask what she thinks. “It shows that you respect and value each other’s input. The more ideas the better,” she says.

Although her title is “deputy mayor,” she says it’s largely ceremonial. “You step in when the mayor is not available. However the mayor is very available. I wasn’t expecting that, but it’s been fun.” The title will begin alternating annually once her two year term is done.

She was also at the leading edge of creating the Community Advisory Groups, with one CAG for Homelessness, Arts And Culture, Economic Development, Climate Action/Environment, Health, and Recreation/Youth Activities.

She wanted more active boards and commissions, but in the end supported the CAGs, which began meeting in October. “We’re trying this first,” she said. “Several of us had the same idea: more community engagement. We had heard about the public wanting to get more involved.” The CAGs are a way for people to work together to get things done. Assistant City Manager Wolf is also in charge of these groups.

“Sometimes I will pop in and say hi, but we want it to be grass roots,” she said. “This started as more robust volunteer opportunities and a place on the website where people would like to get more involved. So, the slogan might be, ‘Get more involved in the New Year.’ ”

It also provides a way for more transparency in how proposals come to the city council, she said.

For the New Year  her goal is to continue learning and still be available to her constituents. 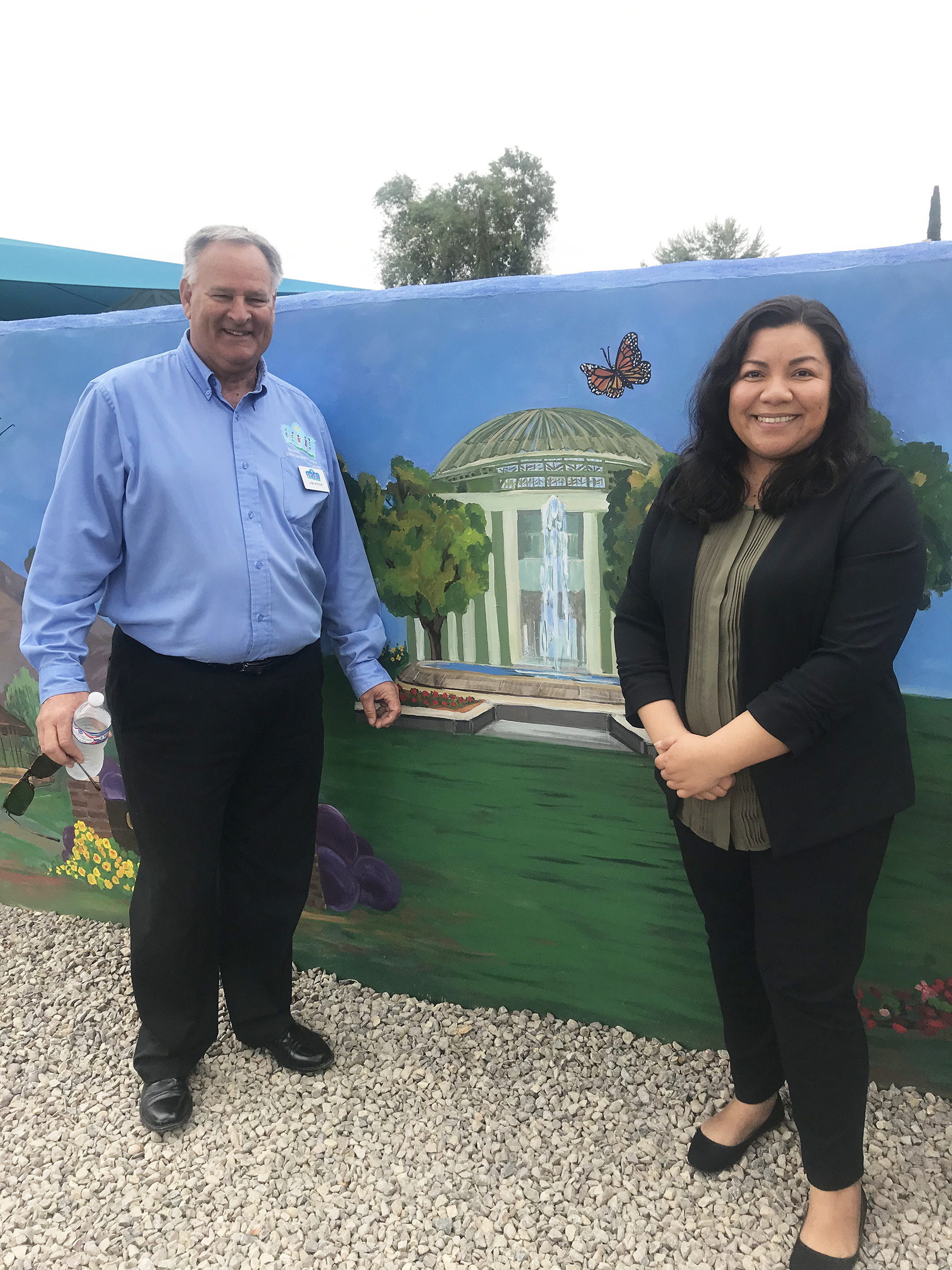 Deputy Mayor Consuelo Martinez at the dedication of a mural. With her is Jim Wiese, executive director of the Escondido Community Child Development Center. The mural was dedicated last year and can be seen on the wall next to the center.

An important thing for the city is the census. “I will be knocking on doors again this year, not to campaign, but to tell people how important it is to be counted, because that helps all of us,” she said. Much of her district is considered “Hard to Count.” “A huge majority of them are in my district. The city is doing a lot to engage the public. I feel that as a leader it’s important for me to tell people how vital it is for them to be counted.”

New state laws regarding rent control are in force. She wants to let her constituents know their rights. “I’m also talking about housing needs. Most in Escondido are renters and they are hurting. This is something I am passionate about.”

She has educated herself about land use because of Escondido’s housing needs. She notes that while upper income earners and lower income earners have housing being built for them, the middle workforce housing is not keeping up. “There is a huge, missing middle. When I ask developers why they will say, “It doesn’t pencil out.” She has been surprised that when she asks to see the numbers: “That’s not something developers do. You have to take their word for it, which seems a strange way to do business. Low income housing; they show you their numbers. That was surprising to me.”

She adds, “I would like to see new conversations about development. Instead of the usual, ‘it doesn’t pencil out’ I would like developers to show me their numbers and let’s see how we can make the right type of development that is needed pencil out. More focus needs to take place on building the housing we need. Housing for the ‘missing middle’ (aka workforce housing and those who may not qualify for low-income housing but don’t make enough for market-rate housing) is the least built and the most needed.”

Last year she hosted the first Earth Day Escondido at Washington Park. “The first event was a success and this year we have plans for a bigger event with food and entertainment. Save the date: Saturday, April 18 at Washington Park.”

She adds that she is happy to see the level of engagement has increased with residents. “There are many more opportunities to get involved. When city council held its goal planning session last year, several of our ideas have come to fruition, such as community advisory groups. You may find that list here: cag.escondido.org/”

Her next in-district meeting will be Tuesday, January 28, 6 –7:30 p.m. Residents may stop by anytime between those hours to chat. The exact location will be announced on the city website.