Conservancy seeks to preserve 1,000 acres next to Escondido 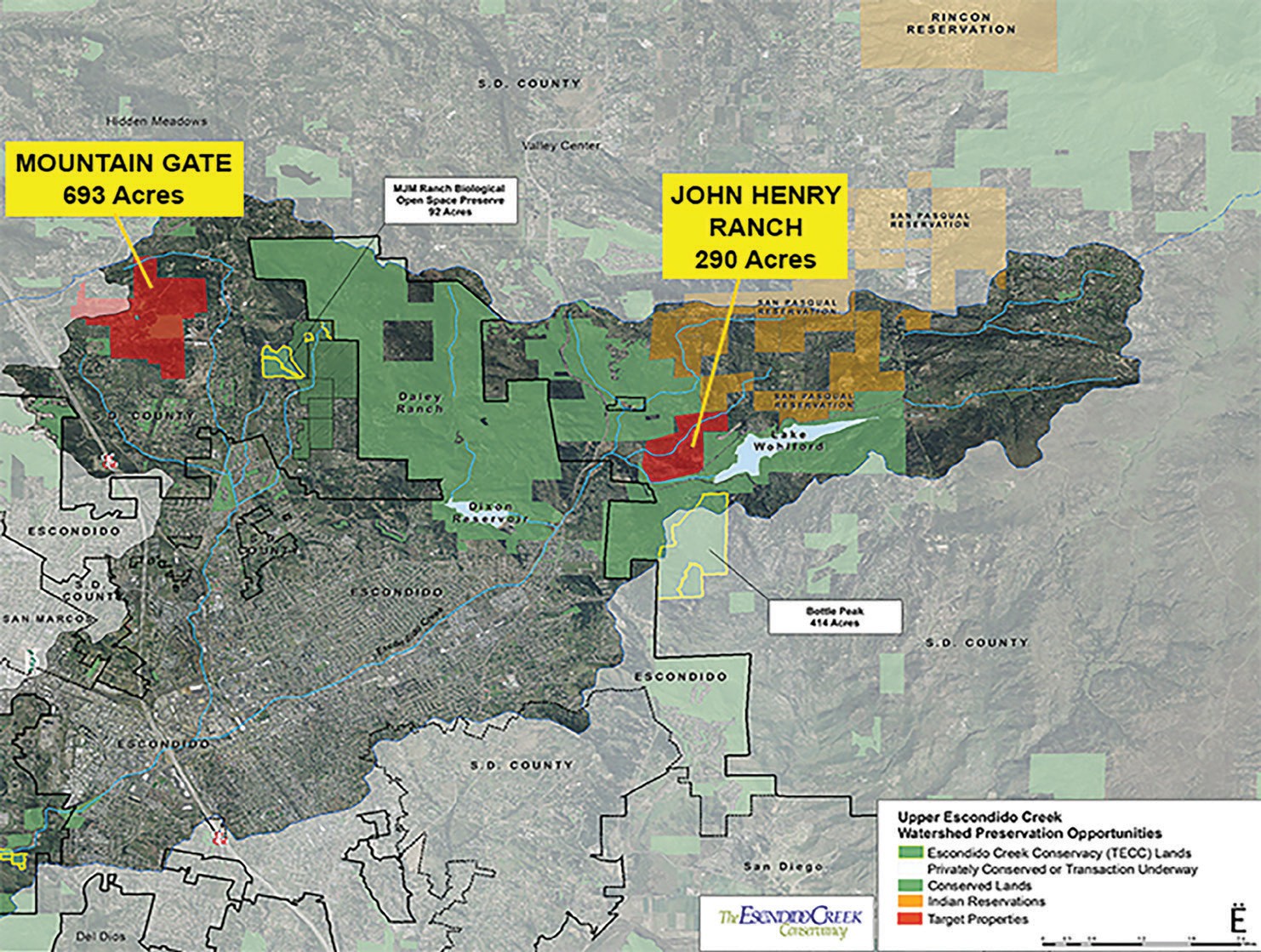 Map shows the land that the Escondido Creek Conservancy has and the lands that it would like to acquire.

Escondido residents who are interested in conserving area habitat have the chance to multiply their dollars by several factors when they donate to the Escondido Creek Conservancy’s efforts to “Help Save 1,000 Acres.”

The conservancy is attempting to raise funds to support options and ultimately the purchase of two properties that together total about 1,000 acres. They need to raise $11 million. However, time is not on their side.

Last year Escondido Creek Conservancy (TECC) was able to put two new properties into escrow: the 694-acre Mountain Gate property in the Hidden Meadows area, and the 282-acre John Henry Ranch near Lake Wohlford. But it must raise the money to purchase them within three years.

At one time about 147 homes were proposed for Mountain Gate, and in recent years there were attempts to develop the John Henry Ranch. Instead, with the help of donors, the properties can be purchased and preserved forever, creating new nature preserves in northern Escondido where wildlife can thrive.

The Conservancy is also in discussions with the owner of another property in this area whose land, if also acquired, would link all these properties to Daley Ranch, Lake Wohlford and Bottle peak, creating one of the most significant protected areas in North County.

According to Kevin Bernard, president of TECC, “We have less than three years to close escrow on these properties, but we must decide by the end of 2016 if there is sufficient community support to proceed or risk losing our deposits. Immediate contributions towards these projects will help us fund option payments, appraisals, and other transaction costs.”

TECC is seeking grants and other funds to meet the sales prices, which total $11.55 million.

Says Bernard, “If we can make significant progress towards our 2016 fundraising goal of $300,000, we will feel confident in this support and continue the work to protect these important properties. With your help, we can save these properties! Donations are tax deductible.”

The conservancy was founded 25 years ago to preserve lands in the Escondido Creek watershed, lands that are roughly west of the I-15 and east of Harmony Grove. 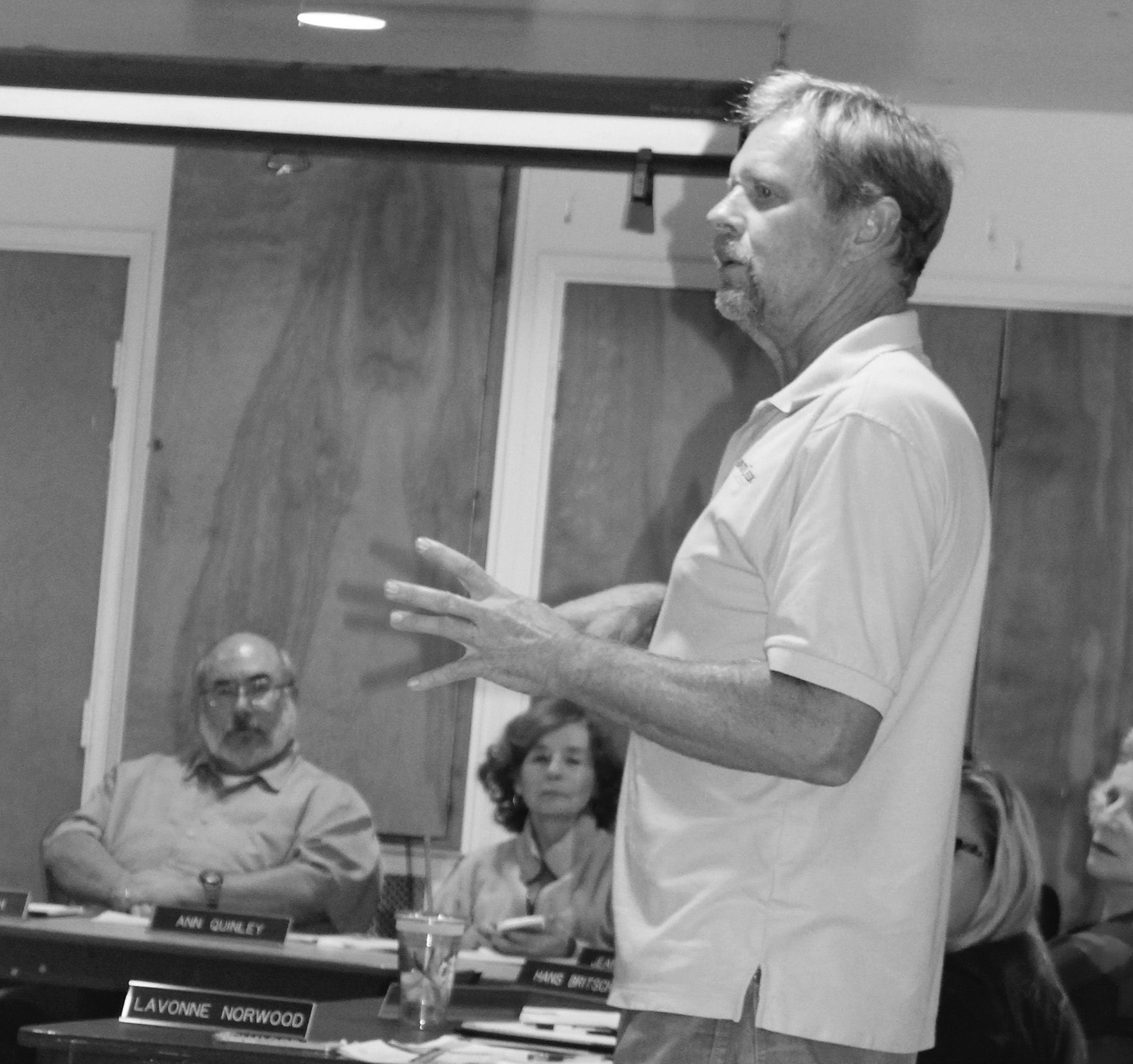 Kevin Bernard, president of the Escondido Creek Conservancy speaks before a local group and the conservancy’s mission.

a public meeting Bernard spoke about the conservancy and its mission. “We use private local money that we raise. We create relationships with the owners of property that we would like to acquire and when the property becomes available we get in fast to make an offer.”

Other sources of funds include the U.S. Fish & Wildlife Service, the state of California, the Department of Defense, San Diego Gas & Electric and even the County of San Diego.

“We are starting to expand our holdings into the upper Broadway area,” said Bernard.

He noted that residents of this county, “live in the most bio-diverse county in the United States. As a result, we have the most threatened species of any county in the nation because everyone wants to live here.”

He added, “Once we purchase these properties it takes them out of development forever.” He noted that they are overseeing the laying out of trails on these properties as they acquire them. They are the home to many species, including that top of the food chain predator, the mountain lion.

“The more open space we can save for that apex predator the more we are going to get along with it,” he said. When predators such as the mountain lion have room to roam they are less likely to trespass onto populated areas.

Because several donors have said they will match other private donations, someone who donates to the Conservancy will see their donation leveraged many factors.

Bernard, who spoke recently before a group of people who had helped to defeat County Measure B, which would have authorized a large development near Valley Center, noted that there would be fewer such proposals if more land is taken out of circulation and put into a conservancy.

“You won’t have to worry about another Measure B on these properties that we want to acquire,” he said. “We just take those lands totally out of the circulation and their control,” he said.