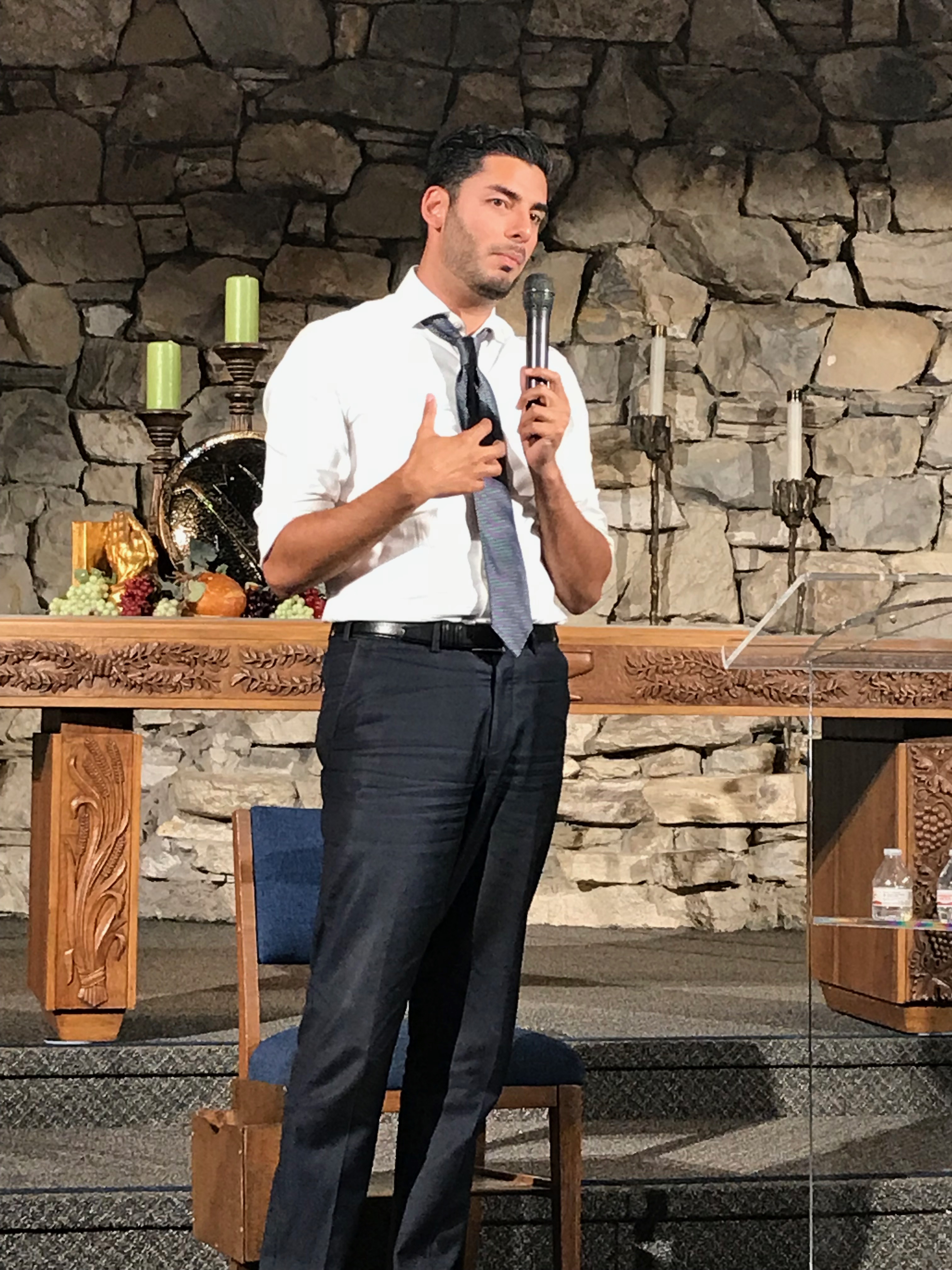 Last week Democratic nominee for the 50th Congressional District Ammar Campa-Najjar spoke for nearly an hour to a candidate forum in Escondido at the First United Methodist Church of Escondido, which invited both Campa-Najjar and Duncan Hunter to present their cases—but only the Democrat showed up.

Local Democrats remarked that the challenger to Duncan Hunter was “clear concise and a showed humility with leadership.”

“How do we pay for it?” he asked rhetorically, and answered himself, “Don’t spend it on a wall.  Why spend $35 billion on a wall that doesn’t work,” he said. “I’d rather take that $35 billion and spend some of it fighting drug trafficking on the border.” The rest, he said, would be spent to fill job vacancies. “If we gave people a good paying jobs we could lift people up. I want to bring jobs to our district and I have a plan to do that.”

The candidate said he is concerned that corporations are leaving California because of high taxes and going to Arizona and Texas, among other states. He would address that problem locally while also addressing high unemployment on Indian reservations.

“Our district is home to more native tribes that any other county. I have talked to the tribal councils in Viejas and Sycuan. They are saying ‘thirty percent of our people are in poverty.”

His proposal is to bring the space industry to San Diego County by locating some of it on reservations, which are exempt from state taxes. Some money would create jobs for tribal people, “The rest would go to our communities. It would be cheaper. You could get defense contractors involved. It would help a lot of people all at once and put this district on the map.”  He added, “It would be poetic justice for Native Americans to be the beneficiaries of exploration and not just the victims.  We need something like this to lift up and show what this district is capable of. Let’s spend $90 million on the border and spend the rest on this. Walls don’t work. People work. We could give every American who wants a job a good, decent job.”

The candidate has a favorite program, whose name reminds people of a TV show, but which is called the Federal Apprentice Program. He learned of it at the US Department of Labor, when he learned that the average apprentice earns $70,000, double the median individual income in America.

Joking that “We have a congressman who says that $170,000 a year is too little to live on,” he said, “If you can provide people with more means and double what they earn then the question of affordable housing, affordable healthcare, affordable education becomes less strenuous.”

He would, if elected, propose to expand federal investment in apprenticeships to provide opportunity to eligible American workers willing to work hard. Workers should be able to advance to the middle class without accumulating the debt of a four-year university degree, he said.

Asked his thoughts on immigration and the border, and the “legal and humane” way to deal with that situation, Campa-Najjar replied, “People ask me how does my faith influence my beliefs? I believe what I believe in, not despite my faith but because of it. It doesn’t mean we can’t see every person through the eyes of God. He quoted Jesus, “Whatever you do for the least of these, you have done to me.” He added, “These are people who have been marginalized. What you’ve done to them you’ve done to me. I’m a person of faith, since we are in a church. I think our lord and savior suffered enough on the cross.”

He said he believes in legal immigration. “We should create a pathway for legal citizenship for the Dreamers,” he said. “It would contribute $48 billion to the economy every year. That’s how big a deal it can be.  I don’t think the solution Is putting people into cages. My father came here under Reagan, who would be rolling in his grave at what he party has done about immigration and Russia. We need to create a viable pathway to earn citizenship for everyone.”

Asked how he appeals to conservatives and moderates. He replied,  “I don’t care about labels, because I’ve been labeled a lot of things. I’ve been called both a terrorist and an islamophobe. I don’t know how you can be both!”

He said that issue he can related to all parties is on drug costs. “We’re the richest country on earth, and there are people who are literally splitting pills to give bonuses to the people who make the drugs.” He said always tells his supporters not to bash his opponent’s supporters.

“I’m going to be voting for you, but I want to hear from you. Let’s hear from you, let’s talk about it.”  Referencing his views on high drug costs he said, “I’m not taking any corporate money. That gives me the freedom to say what I mean and mean what I say. I don’t care for labels.”

Asked about the Affordable Care Act (aka Obamacare) Campa-Najjar he quipped. “So far it’s been good on care, not so good on affordable.” He considers “Medicare for All” to be financially sound, “because it would save us a trillion dollars over the next ten years.”

“But if we can’t get Medicare for All for political reasons, then we should take on the prescription drug companies.” He would set the federal government to negotiate lower drug costs. “Force free markets to compete.” To those who say the government can’t afford the tax hikes to pay for this, he replies, “You’d be paying less in taxes than what we pay in premiums now. It’s whether we trust to government to do something as big as that.”