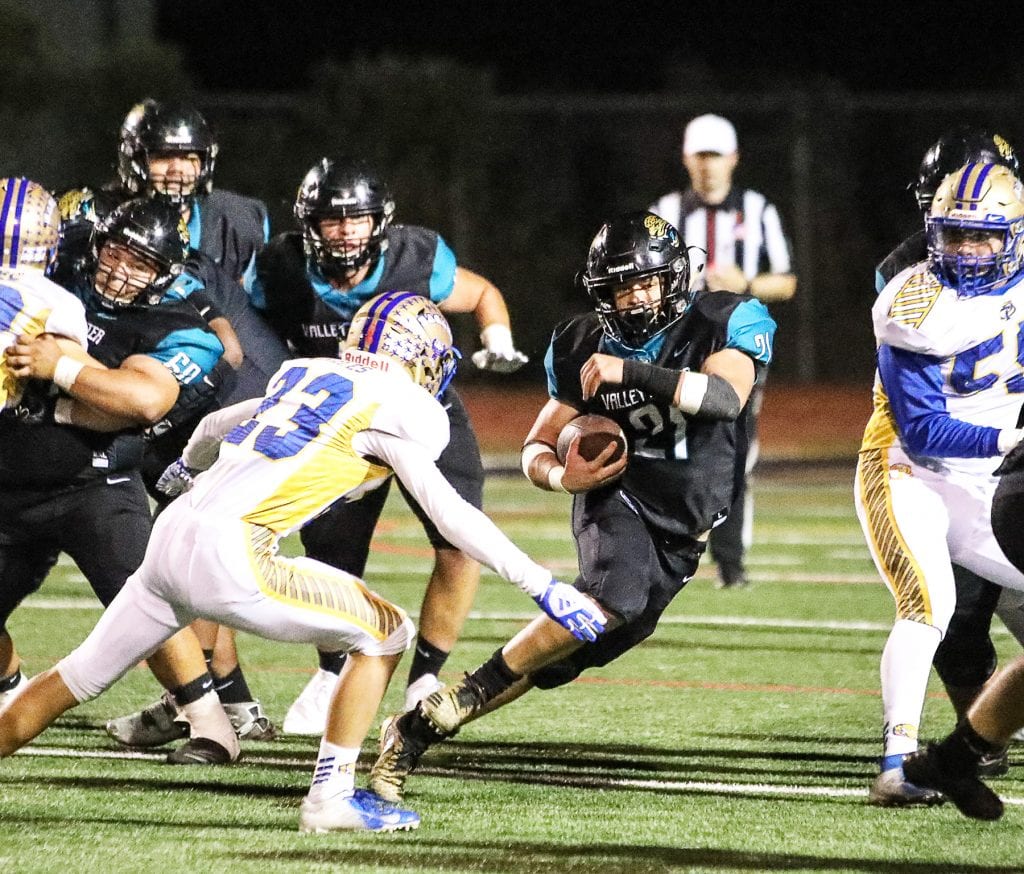 Bursting through a opening created by his skilled offensive line, VC running back Mateo Sinohui looks to cut back against SP defensive back Ethan Huffman. Photos by Lenny Kerbs

Arguably it was the most important and determinative second half of the season for both the host Valley Center Jaguars and San Pasqual High.

After battling to a 7-7 draw through 24 minutes of action last Friday night, the respective teams fully realized the significance of what was about to transpire over the final two quarters.

For the Jags, they were hunting for a win that would strengthen their hold atop the Valley League standings (3-0) and keep their overall record above .500 (5-3.)

As it related to the Golden Eagles (4-4, 1-2), if they were to have any hope of contending for the VL crown, getting the best of VC was an absolute must. Having already fallen to a tough Ramona squad, SP couldn’t afford to absorb another circuit loss.

And in the end, Friday’s outcome came down to the most basic of football’s maxims – whoever makes the plays and executes when it matters most will win the day. In this case, that distinction went to the clutch Jags.

Scoring on three consecutive possessions after intermission and bolstered by a defense that produced a passel of big plays, VC gradually pulled away to secure a huge 28-7 victory. But don’t be misled; the G. Eagles definitely had their chances to hang for the duration if not take the outright lead. However, making timely plays eluded them while the Jags seemed to thrive in that area.

Nonetheless, the second half got off to a promising start for SP when the dangerous Shawn Carter took the kickoff and neatly weaved in and out of traffic for a terrific 46-yard return. But ultimately this advance would end at the VC 32-yard line when, after being heavily pressured, G. Eagle quarterback Trevor Jungman tossed an incomplete pass on a fourth-down attempt.

Later on in the third stanza, VC was quick to take advantage of a short field. Starting from the SP 35, the Jags’ outstanding running back Mateo Sinohui displayed notable power on one carry and a nifty spin move on another that resulted in a total of 26 yards. Two plays later, Sinohui got a nice push from his offensive line that helped pave the way for his determined 4-yard TD run. Suddenly, the deadlock had been broken at 14-7 with 4:32 left in the third.

But seemingly undaunted, the G. Eagles showed their grit by again moving into Jag territory on the strength of some hardnosed running by Raymund Rodriguez and a drilled 10-yard hookup between Jungman and smooth wideout DJ McNeal. But alas, on a fourth-and-short from the VC 33, the visitors came up empty again when, after momentarily mishandling the snap, Jungman simply couldn’t surge forward quite far enough.

However, thanks to an aroused defense, SP soon after forced a VC punt. It was at this stage that the game’s momentum was about to swing towards the Jaguars for good. Punter Loren Diloreto got off a line drive kick that descended quickly and had some tricky spin on it. Understandably anxious to get to the ball quickly and not allow it to take a lengthy roll, return man Johnny Mascari – a hustling and resourceful player – aggressively attacked it but the rock rapidly died on him and he was forced make a lunging effort to try and secure it. Unfortunately, it wasn’t to be. Mascari simply couldn’t get a hold of the pigskin and there was that man Sinohui who jumped on it like white on rice.

Now really juiced by Sinohui’s recovery, the Jags were looking to put the hammer down and it would take them just four Sinohui carries to do so; the last of which was a 1-yard plunge off the left side. More than eight minutes still remained but with a 21-7 margin and a defense that was  humming, VC’s prospects were shinier than their slick black helmets.

The G. Eagles’ last real shot at getting closer ended with a failed pass attempt out of punt formation. Not much later, Sinohui, who would finish with 162 rushing yards and four scores on the night, hunkered in behind some great blocking upfront and tallied from six yards out for the coup de grace that helped run the final count to 28-7.

In every sense, this was a total team triumph by the Jags. On offense, Sinohui was his usual stellar self whether he was running over people, getting to the perimeter or dialing up some of his shifty moves. Sinohui’s status as one of the County’s elite backs is reflected by fact that he now leads the San Diego Section in rushing touchdowns with 20 and is second in yards gained with a massive 1,357. 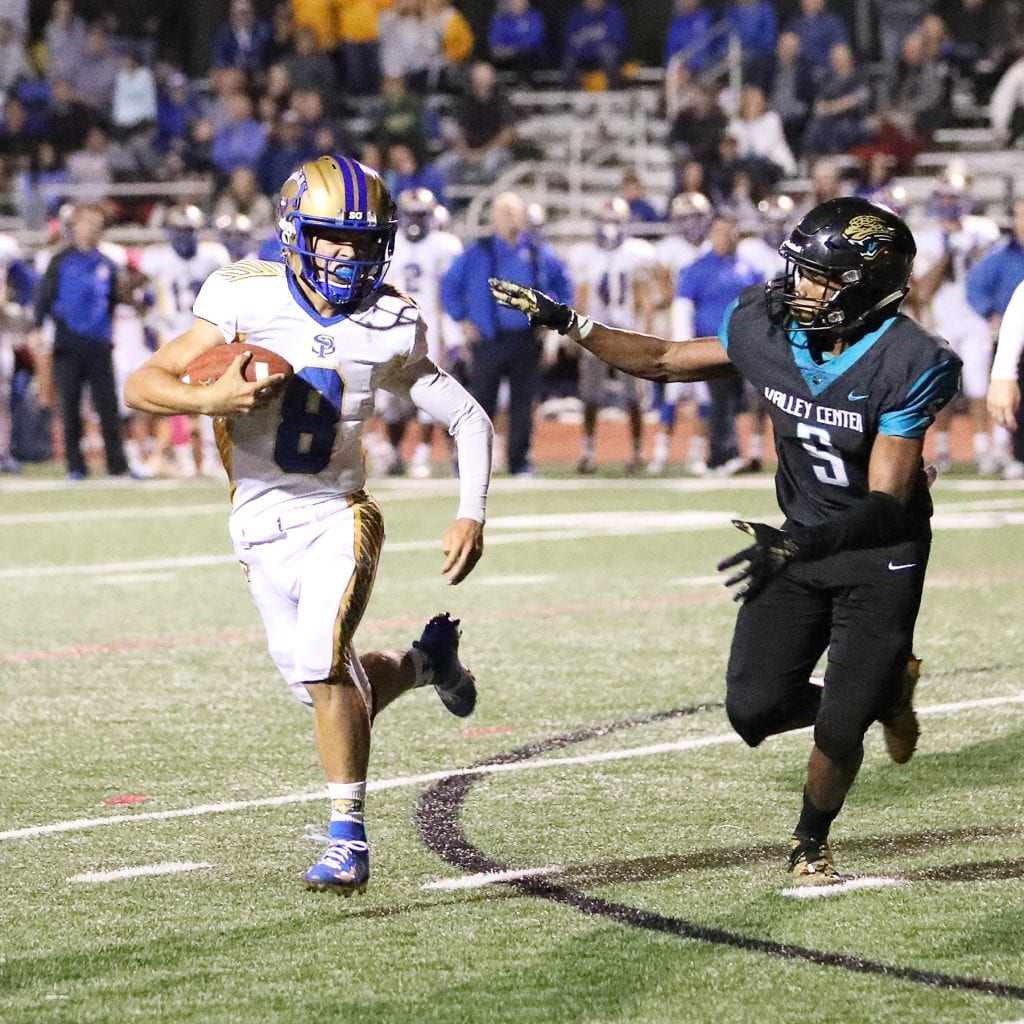 Though he threw but 14 times during the contest, Jag signal-caller Rikki Mazzetti was sharp when he needed to be, particularly on VC’s first scoring drive that traveled a remarkable 98 yards and featured three zipped tosses to fluid receiver Chrishawn Gordon that went for 14, 17 and 16-yard gains.

And wow, those rugged boys in the trenches were superlative. Center Luis Ramirez, guards Nick Sabarra and Carlos Gonzalez along with tackles Ed Hill and Lance Roche not only carved out sizeable holes but their influence on the game’s tenor dramatically increased as the contest wore on.

Though there were many impactful players on the defense as well, active linebacker Eddie Imgrund was the headliner with 8 solo tackles (11 total) though he got plenty of help from fellow ‘backer Sid Weddington, cornerback Tristan Garcia and defensive end Xavier Jones, who recorded 8,7 and 7 tackles respectively. Lineman Dominic Stevens was another who enjoyed a productive evening with his 4 tackles that included a sack.

Though coming out on the short end, the G. Eagles still had their share of notable players and never gave up the fight, a characteristic of a Tony Corley coached team. Jungman, a clever runner and underrated passer, had his moments with both his feet and arm. His 17-yard touchdown pitch to Shawn Carter was nicely feathered between two defenders.

Meanwhile, Carter looked assertive and dangerous whenever he touched the ball. Whether he was grabbing a pass, taking a pitch or bringing back a kick, the 6-foot senior loomed as a threat for the entire 48 minutes.

And on the defensive side of things, Isai Ramos came to play and did so with a vengeance. Hard-hitting and aggressive, the talented down lineman stuck his nose in on many a tackle.

Moving forward, the Jags will travel to Escondido Friday night and should they get a win there as many expect, that would set up a titanic battle with Ramona the following week with the winner to take home the VL title.

As for San Pasqual, they’ll also hit the road for a date with Fallbrook. Interestingly, all four of the G. Eagle losses have come away from home. Most experts don’t expect that trend to continue against the Warriors. Look for SP to get back on the winning track and use that as a springboard to a strong finish to the regular season. And if the G. Eagles, given their legitimate personnel, can put it all together come playoff time, this team could make a real postseason run.

But in the second half of their pivotal game against VC, the G. Eagles just didn’t have the answers while the Jags passed that test with flying colors.