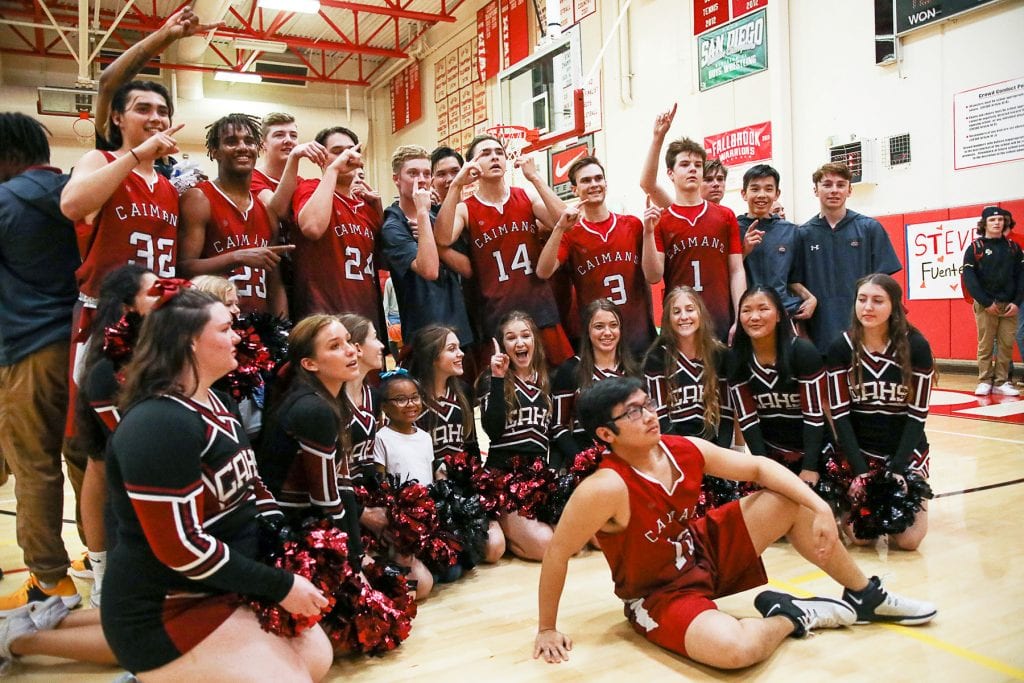 The Caimans celebrate their hard-fought 50-44 conquest of the Warriors. Photo by Lennie Kerbs

When it was all there for the taking, when their very existence was on the line, the Classical Academy hoopsters didn’t flinch.

They stood tall and delivered and as a result, coach Chris Williams and crew are but one step away from capturing a San Diego Section CIF championship.

In a Tuesday night game that wasn’t always an artistic success but was filled with intensity, excitement and plenty of drama, the Caimans came through down the stretch and authored one of the most riveting finishes in the annals of Classical basketball.

And because of their ability to meet the moment, the Caimans persevered and were rewarded with a 50-44 Division V semifinal win over host and No. 1 seed Fallbrook before an energetic and raucous crowd.

With their third straight win in the playoffs and seventh overall, the 20-8 Caimans now move onto the finals where they will meet a familiar foe in intracity neighbor Calvin Christian. That title matchup is scheduled for a 7:30 p.m. tipoff this Thursday night at Carlsbad High and will mark the third time this season that the two teams have squared off with the previous two encounters having been split.

But back to the game that allowed 5th seeded Classical to survive and advance. With the clock showing just over two minutes remaining and the score tied at 40 apiece, the Caimans rose to the occasion when matters reached critical mass.

Junior Luke Choy got the ball rolling during a game-deciding sequence when he accepted a great feed from an airborne Maximus Brown and drilled a huge trey from the right wing that pushed the visitors back into the lead.

Shortly thereafter, omnipresent swingman Brown drove hard to the hoop, delayed his release and then somehow managed to muscled his way to another timely bucket.

Now up by five, the Caimans’ position grew even stronger when Noah Claxton hauled down a critical rebound which soon led to a trip to the charity stripe by freshman guard Presley Bruskotter. An absolutely lights-out free-throw shooter, Bruskotter calmly swished home both his attempts and suddenly Classical had created some significant separation at 47-40.

But senior captain Joel Calhoun, a splendid and aggressive player, was fouled on a frantic drive to the hoop and his two converted tosses from the line got the Warriors back within hailing distance, trailing by five.

However, Fallbrook’s faint hopes were quickly dashed when Brown came up with a dagger of a steal before netting a free throw. When Bruskotter added two more points from the foul line, any remaining doubt about the outcome had vanished. It wasn’t long before Classical was in the midst of a joyous on-the-court celebration.

In the aftermath of his team’s signature win, Coach Williams talked about what he felt was the key to the victory. “We did a good job of sticking to our game plan which was to have everything revolve around playing good defense,” he said. “Towards the end, we kept talking about getting after it defensively and getting some big stops which we did.”

Williams also felt that having played and beaten Fallbrook earlier in the season not only gave his team an idea of what to expect in the rematch but provided a confidence that they could hang with the Warriors despite being in a foreign gym. Speaking of which, the Caimans continued to prove their prowess away from home with their 13th victory in 17 road or neutral outings.

When asked about who stood out for his club, Williams was quick to cite the orchestrating Brown. “The guy can just do it all,” praised Williams. “He can handle pressure, rebound, dish, get to loose balls and, of course, score.”

Brown was one of two Caimans who reached double figures with 11 points while Bruskotter led the way with 14 points, many of which came from charity tosses.

Thanks to a pair of free throws and a left-wing trifecta from Bruskotter in the early going, the Caimans got off to a 12-10 first period lead. But then Sherman and Calhoun began heating up as they combined for three treys and 13 points that enabled the hosts to take a 23-21 edge at the half.

However, Classical regained the advantage at 36 -34 by the end of the third stanza due in large part to some outstanding downtown bombing from Jordan De luca, who connected on a pair of corner 3s. “That’s why he’s there,” Williams said of the senior guard. “He’s there to come in and shoot.”

And so the stage was set for a compelling fourth period and a late surge by the Caimans that will long be remembered by their fans that were in attendance.

Now it’s onto a championship final matchup with Calvin and a chance to make even more hoop  history. “Playing another Escondido team is gonna make things really great,” declared Williams.

But the feel-good vibe that now surrounds the Caimans will become even greater if they can use their Fallbrook conquest as a springboard to the ultimate prize.