A climb up a 29-foot ladder at the top of the historic peak reached a fire lookout station. The Adrian Cooper family of Valley Center celebrated a birthday atop Bottle Peak in April 1927.

A group of 14 hearty and hardy men and women made the strenuous climb last Sunday to one of the most historic — and least known — sites in the Valley Center-Escondido area.

The goal was to reach the summit of Bottle Peak which can be seen from various parts of Valley Center and is clearly visible to the east while driving down the Valley Center Grade into Escondido. It can also be viewed from parts of Escondido including downtown’s Grand Avenue.  It was the site of first fire lookout tower in San Diego County. In the 1800’s, there were reports that gold had been found near the peak.

The name Bottle Peak was inspired by residents in 1912 who spotted a newly-built fire lookout station which, they said, “looks like a bottle sitting on a rock.” The wooden station sat on a concrete slab at the 2,083-foot elevation and was reached by a 29-foot ladder mounted to the side of the mountain, bringing the total elevation, including the hip roof, to 2,136 feet.

The fire tower was built by a forest ranger following a 1904 wildfire that devastated the area.  Each piece of wood to construct the tower and the ladder was carried up the mountainside by hand. The Forest Service identified the location as being in Bear Valley, the original name of Valley Center.

The Bottle Peak lookout station remained in active use for several years, but was listed as abandoned by 1938. It was lost to a fire in the 1950’s. The concrete slab on which the building stood still exists.  It is surrounded by a 418-acre open space preserve owned since 2013 by the County of San Diego.

Several fires have threatened the preserve in recent years including the 1989 Bottle Peak blaze and the Guejito Fire of 1993.  Portions of the historic Rancho Guejito are adjacent to the preserve. The County created a management plan for the preserve last year.

Last Sunday’s hike was sponsored by the Valley Center Trails Assn., a non-profit group of volunteers whose goal is to connect the community through the development of non-motorized trails and pathways, and which regularly organizes hikes in the region.  They were joined on this trek by the Kiwanis Club.

In the late 1800’s there were reports of gold waiting to be discovered in the hills around Bottle Peak, but they proved false.  However, a successful privately-owned quartz mine was in operation from 1897 to 1914 after a 67-foot tunnel was dug into the mountainside.

For hikers accustomed to ascending steep heights, the peak offers commanding views in virtually every direction, but trekkers are warned that the path is uneven and poison oak is common.  The trailhead is near a dirt parking lot off Oakvale Road near Lake Wohlford Road in Valley Center.

In the interest of full disclosure, the writer is a member of the Valley Center Trails Assn.  He did not make the climb to the peak. 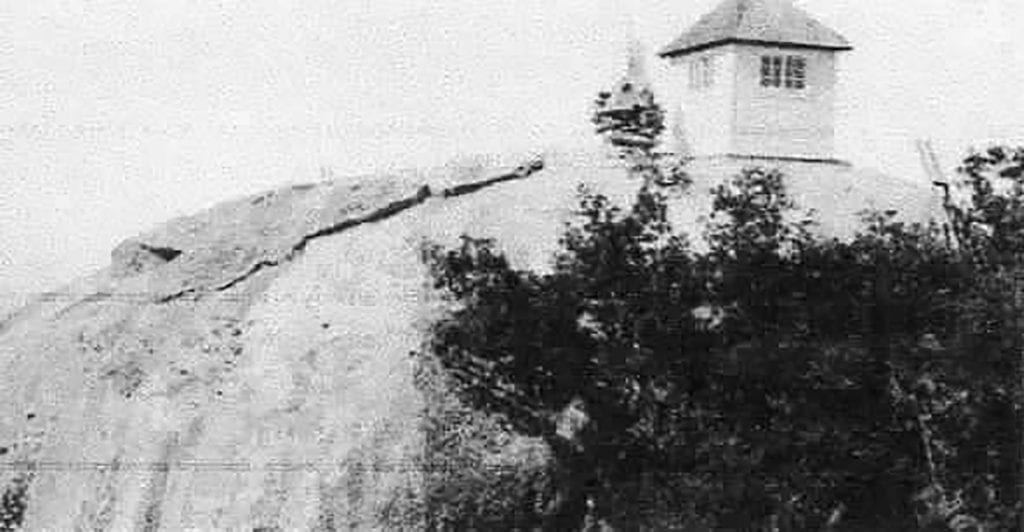 A 1913 photo of the recently built fire lookout station that gave Bottle Peak its name.