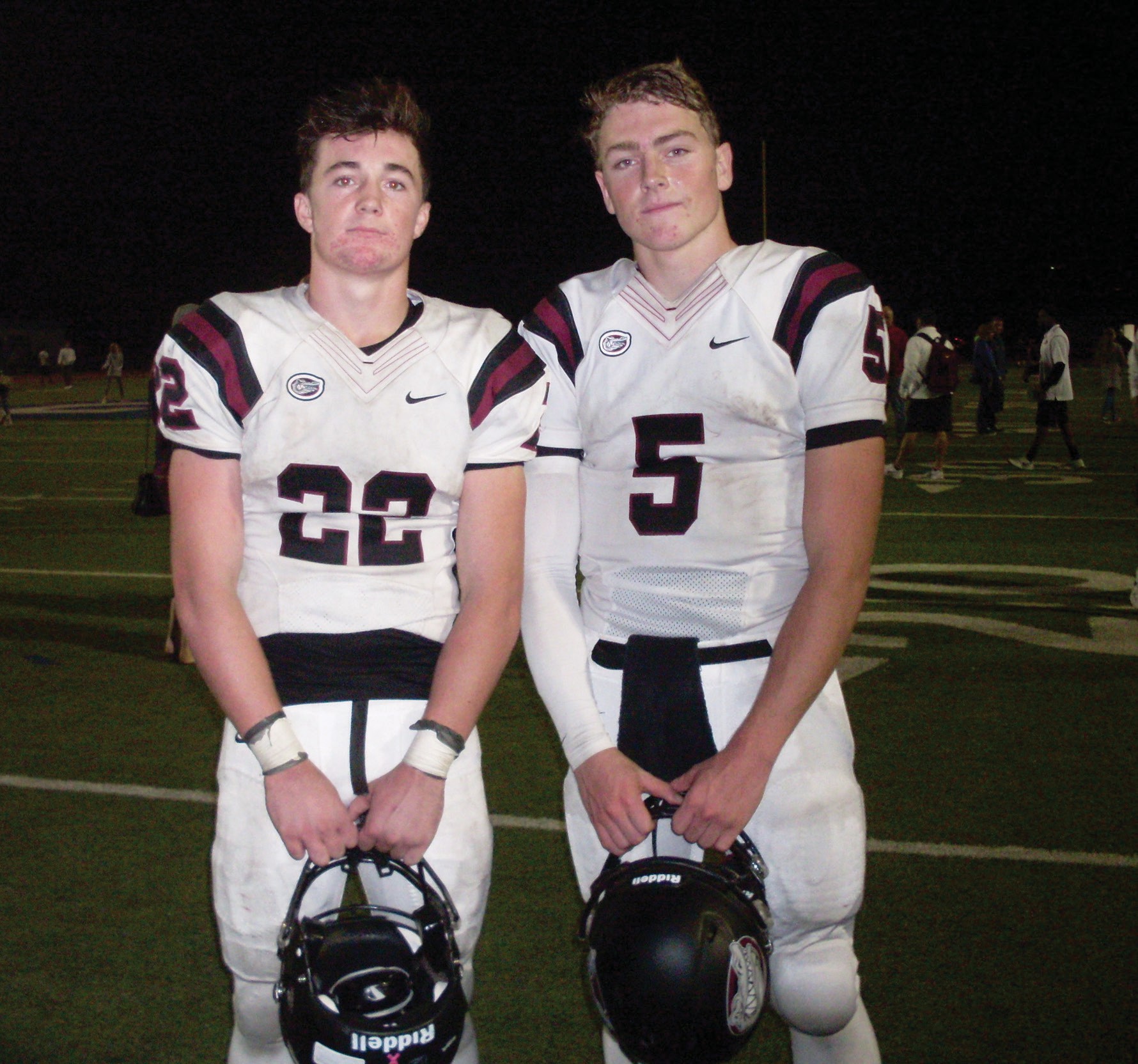 Running back Ty Patterson (left) and quarterback Caleb Moen proved to be a potent backfield tandem in the Caimans big win over Escondido Charter. Photo by Brittany Aellig

While both teams managed some incredible plays, running back Ty Patterson proved unstoppable for the EC defense. His 318 rushing yards dictated the game’s offensive strategy. Aggressively upping their rushing attack on seemingly every series, the Caimans with senior Caleb Moen at quarterback were able to establish a lead towards the end of the first quarter that held throughout the game. This win resulted in the Caimans remaining undefeated in the Pacific League and launched them into playoff season with high spirits.

Channeling their energy in this match against Charter High, it’s clear that the Caimans brought their all. Classical simply dominated both offensively as well as defensively. The White Tigers were able to fight back with several long passes and even managed to recover a fumble after a punt to CAHS. However, the Caimans overwhelmed them with an incredible 439 rushing yards and a continually increasing gap on the scoreboard. Their run game was so dominant that Moen’s passing for only 15 total yards proved to be immaterial.

Both teams were unable to gain much throughout their first drives but beginning at the 50-yard line, Classical’s second possession set the tone for the remainder of the game. With their second down having netted only a handful of yards, the outlook was unfavorable. However, Patterson then cleared the White Tiger defensive line and sprinted an amazing 42 yards, steadily shaking off potential tacklers all the way to the end zone. As the crowd roared its approval, Kicker Jk Haman converted the extra point with 6 minutes left in the first quarter.

After this astounding score, neither team was able to make much progress. As Classical Coach Jon Goodman sighed, “We started slow.” The next four series for both sides were defined largely by incompletes and very little progression down the field. It wasn’t until the middle of the second quarter that Classical was able to secure another touchdown. Four rushes resulted in immediate first downs each time, setting up the Caimans for a first-and-10 from the 11-yard line. Patterson carried for a gain of five yards before Moen finished things off with an 8-yard run to the end zone. With a successful extra point, the lead was upped to 14-0.

EC’s following possession ended with a punt but the White Tigers got an unexpected break when Hunter Boyce recovered Jake Zimmerman’s kick at the 36-yard line. After one third-down conversion, the White Tigers again found themselves with a third-down situation at the 42-yard line. Matthew Burcin, seconds before being brought down, tossed the ball to Tristan Macmahon who immediately darted down the field to the 11-yard line, a 31-yard gain that brought the first glimmer of hope to Charter fans. A penalty for unnecessary roughness against Classical gave EC another 5 yards. From here, they moved in closer to setup a fourth-and-goal from the 3-yard line. It was left for Burcin to carry the rock for those last few yards and put the White Tigers on the board with 4:44 left in the third quarter. Classical refused to let them close the gap any further, however, by successfully blocking Zimmerman’s extra point attempt, leaving the score at 14-6.

Classical High’s offense answered this score by immediately handing the ball to Patterson who sprinted for a 10-yard gain on first down. On second down, with eight yards to go for a first down and positioned at Charter’s 22-yard line, Patterson spotted a clearing and flew through the opposition until being tackled by Ivan Rubio at the 37-yard line. A flag for holding pushed them back and landed them in the daunting position of first-and-25 from the 50. However, Patterson was able to spot a gap in the line of defense, securing a first down at the 27. Though Moen missed a subsequent snap, he recovered quickly, picking up the ball and tearing through Charter’s defense. He delivered a 27-yard run and tallied another Caiman touchdown, with just over 3 minutes left in the third quarter. Thanks to another successful extra point by Haman, the scoreboard sat at 21-6.

Charter managed to keep the ball away from the Caimans with a long series that stretched into the beginning of the 4th quarter. And when a Classical kick resulted in a touch-back, Charter worked its way from the 20 to a third-and-2 at their own 30. But a ten-yard penalty sent them backwards and eventually facing a lengthy fourth-down situation, the White Tigers were left with little choice but to punt the ball back to the eager Caimans.

Despite starting with terrible field position at the 1-yard line, this did nothing to stunt Caiman offense. Patterson once again displayed his speed by gaining 24 yards on one carry and then gained 14 on another tote. Now with a first-and-10 from the 13, Patterson finished off this successful march by sprinting into the end zone with 7:02 remaining on the clock and Haman converted the extra point to make it 28-6.

At this point, the Caimans had proved themselves untouchable in the run game and they continued to exert their will by taking the ball from Charter with an interception by Ethan Pillsbury, who brought it back a sizeable 20 yards. Now advantageously positioned with a first-and-goal, CAHS advanced to a third-and-goal from the 5. From here, it was once again Patterson who found the end zone with just under 5 minutes left in the game which culminated the scoring at 35-6.

“We executed really well and brought a lot of heart” said a beaming, upbeat Moen. Clearly exuberant about the win, both Moen and Patterson were all energy and smiles after the game. “This is a big rivalry and we lost last year,” said Patterson. Moen agreed: “This win was really important for us.” Coach Goodman, obviously proud of his team, said it’s especially exciting to see the “growth and improvement over the season.”

Patterson’s massive rushing total and the team’s overall aggressiveness and cohesion proved to be an unstoppable force. The team’s outlook for the playoffs has taken a decidedly positive turn due to the positivity of this victory. In Patterson’s own words, “it’s just the greatest feeling.”