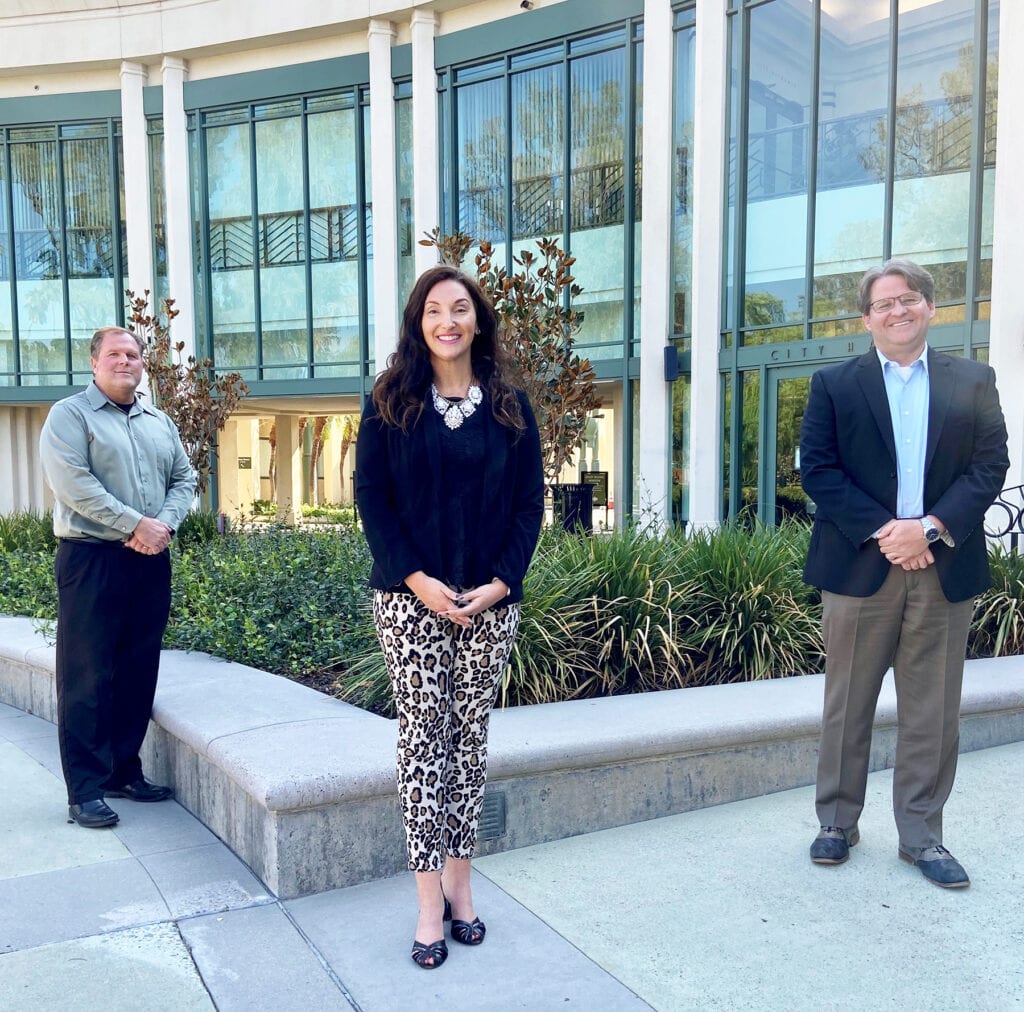 Last week, the City of Escondido welcomed three familiar faces to new roles within the City’s leadership team. With the recent departure of the Deputy City Manager and the upcoming retirement of Assistant City Manager Jay Petrek, it was necessary to revitalize the leadership in the City Manager’s office.

Fortunately, the City has a very strong management team, and City Manager Jeffrey R. Epp was able to select the best possible of several options with substantial savings to the budget.

Epp commented, “Initially, I think it is prudent to leave the Assistant City Manager position vacant for the present. That position both would, and should, be a key pick for the next City Manager in order to provide this new leader with important flexibility and choice when they join the organization.”

The city manager continued, “Next, I believe it is critical to recognize the strengths and areas of emphasis that will keep our City going during the next two years and beyond, as we plan towards 2022 and vision for 2088. Technology is critical to our entire organization and our ability to function efficiently. Good communication of all forms, both internally and with the community, is how we get things done. And a solid knowledge of our municipal systems as a full-service City is important for Escondido to be safe, clean, and run efficiently.”

Epp concluded, “With these things in mind, Jay Petrek and I have asked three department heads to retain their existing responsibilities and also take a more active role in managing our City. These are Chris McKinney, our current Director of Utilities, Rob Van De Hey, our current Director of Information Systems, and Joanna Axelrod, our current Director of Communications and Community Services. Their title will change to Deputy City Manager and starting immediately, they will work together with myself and City Attorney Mike McGuinness as our senior management team. These moves will also create substantial cost savings for the budget.”

These three appointments emphasize Epp and Petrek’s team approach to running the City and continues to enable flexibility and efficiency in addressing community issues. The appointment of these three individuals will continue that team philosophy, allowing the City’s management team to work together to lead the city.

Joanna Axelrod started her career with the City 14 years ago as a youth services librarian and progressed into library management before becoming the Director of Communications and Community Services.

She holds a Master of Science in Information from the University of Michigan and a Bachelor of Science in English, Political Science, and Business Law from Central Michigan University. She is a graduate of the Hardwood Institute for Public Innovation, a Eureka Leadership Institute Fellow, a Certified Parks & Recreation Professional, and was named a Library Journal Mover & Shaker. Perhaps her greatest claim to fame is her title as the 2008 LG San Diego Regional Texting Champion.

Christopher McKinney’s career in public service started in 2002 with the City of San Diego’s Wastewater Department.  He worked there as an Electrical Engineer, Asset Management Coordinator, and Deputy Director of the Wastewater Treatment Division.  He joined the City of Escondido team in 2011 as Utilities Director.

He and his wife, Teresa, have four children at home, ranging in age from 17 to 6.  He enjoys travelling with his family and using his small telescope to feed his love of astronomy.

Robert Van De Hey is Deputy City Manager – Director of Information Systems for the City of Escondido. He started his career with the city almost 19 years ago as Network Systems Engineer and progressed to Senior Network Systems Engineer and then Network Manager before becoming the Director of Information Systems. Prior to coming to the City, he held both Accounting and senior level Technology positions at two private sector companies.

Van De Hey’s education is twofold. He holds a Bachelor of Science in Business Administration with an emphasis in Accounting from San Diego State University, and he has held many technical Certifications from Microsoft, Cisco, CompTIA and others. He finds that this combination of education and experience has provided a recipe for successful leadership.

Van De Hey sees himself as a leader in the organization who happens to specialize in technology. His experience provides him with a well-rounded knowledge of all things local government. Being a successful tech leader is much more than having an impressive resume and skill set. As a technical leader, Robert strives to foster technological innovations that advance business strategies while creating, and more importantly motivating, community engagement.

When Van De Hey is not working he is out hiking at Daley Ranch in Escondido, playing soccer, restoring his classic Volkswagen, or his favorite, spending quality time with his family.