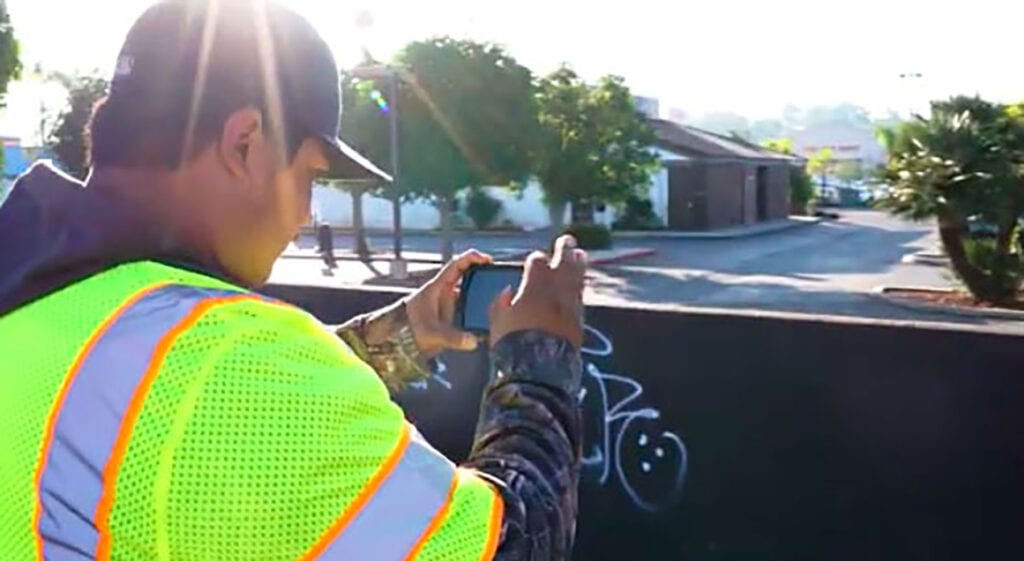 A city employee snapping a photo of graffiti that needs to be eradicated.

Editor—The Times-Advocate thanks Jamie Armstrong, content marketing manager of Cityworks, based in Sandy, Utah, for permission to quote extensively from his article about Escondido’s graffiti program.

The American Public Works Association (APWA) recently featured the City of Escondido’s graffiti program and its use of technology to combat this modern urban blight.

The city’s approach combines a mobile app for employees and the Report It! Application, which depends on citizen participation. The graffiti eradication program now reports tags being removed within 24 hours or less.

You can download the Report It! app from your smartphone’s app store today to help out. Report graffiti or some other irregularity and a work order will be generated in short order.

Deputy City Manager Rob Van De Hey says the emphasis should be on people, not just technology.  “I’d like to highlight the people side of things—Citizens via Report It! App  and staff working together. Yes, the technology enables the citizen and staff partnership but it is the people that are truly making the difference.”

Because Van De Hey’s job includes the title Director of Information Systems, the graffiti eradication program is under his umbrella.

He told The Times-Advocate: “This graffiti program was an incredible testimony of how public engagement and passionate city staff can work together to make a difference. City staff from multiple departments worked together to create an innovative solution designed to leverage public engagement resulting in a clean city that is efficiently run aimed at a better quality of life. I have to say that we are all extremely proud of the Graffiti Eradication crew leadership and staff that clean this blight from our city six days a week. Honk and wave as you see them letting them know you appreciate the work they do.” 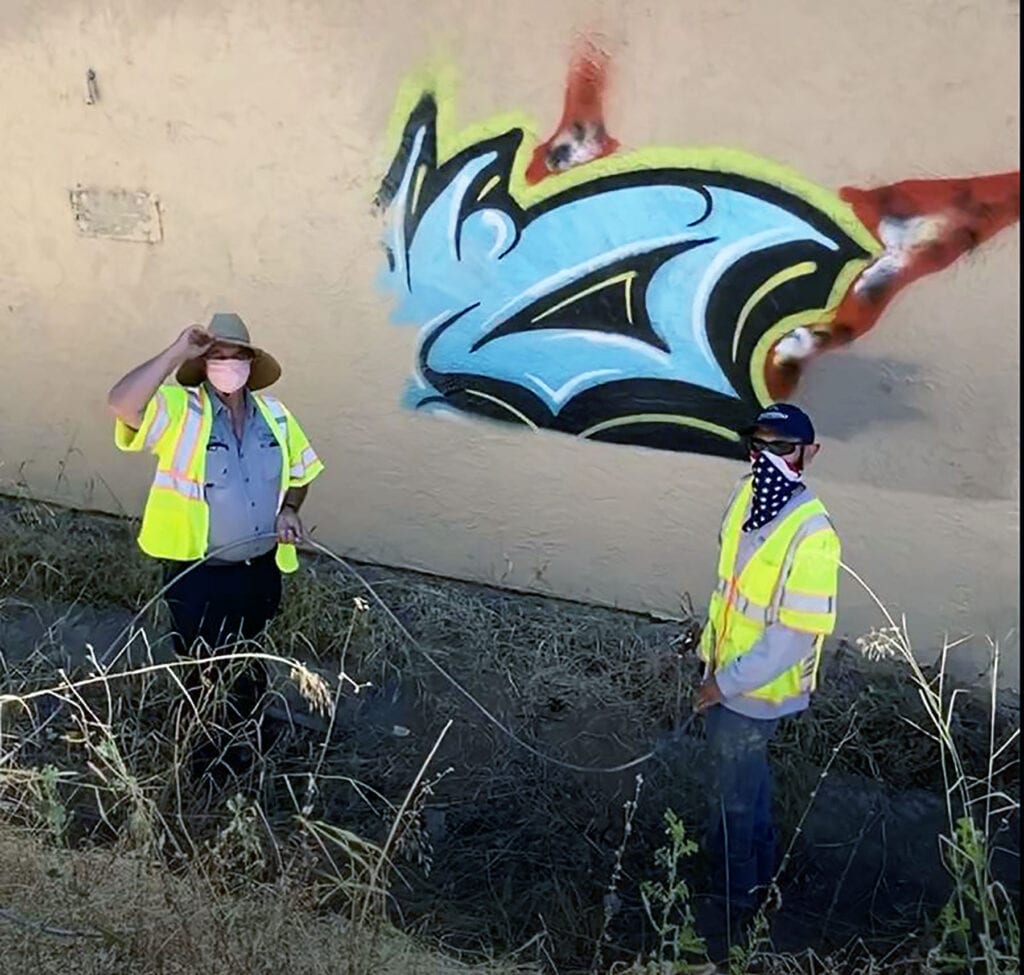 Jamie Armstrong, content marketing manager of Cityworks, based in Sandy, Utah, wrote an extensive article about the program: “Goodbye, Graffiti: How Escondido is using technology to reclaim their city.”

The article begins, “In Escondido, California, it used to take days for city workers to remove a graffiti tag. Now, thanks to the city’s cutting-edge graffiti eradication program, graffiti is removed within 24 hours. By combining GIS, a mobile app, and the city’s Report It! citizen engagement app, Escondido has created an award-winning formula.”

The article describes how the program germinated. “We knew that we needed community engagement. We needed help,” said Van De Hey, adding “Through the Report It! app, citizens can report the location of a graffiti tag, upload pictures of the issue, and provide a description of the issue. Then we can leverage the power of data and technology to create efficiencies.”

The data are used to ID graffiti “hotspots” employing heatmaps (i.e. a representation of data in the form of a map or diagram in which data values are represented as colors.) Joe Goulart, the city’s director of public works, explained to Armstrong, “I have a dashboard that has heatmaps showing where graffiti activity is happening, and the ArcGIS layering allows us to have exact locations.” He added, “Without technology, we’re working blind, but when we’re able to capture so much data, we are able to make better decisions and create huge efficiencies in the workflow process.”

One efficiency is being completely paperless. When a citizen reports graffiti using the Report It! app a work order is generated immediately.  Armstrong writes,  “Using the mobile app, crew members receive work orders directly on their mobile phones, saving valuable time since they are no longer required to come into the office for assignments.”

This gives the city the ability to quickly share the right information with the right person in “real time.”  Nyberg told Armstrong, “It gives us the flexibility to dispatch whoever is closest to the graffiti tag or the person who has the right color of paint to cover it or the right tools to do a larger job. The data also allows us to run reports to better plan for staffing needs and accurately budget for materials.” 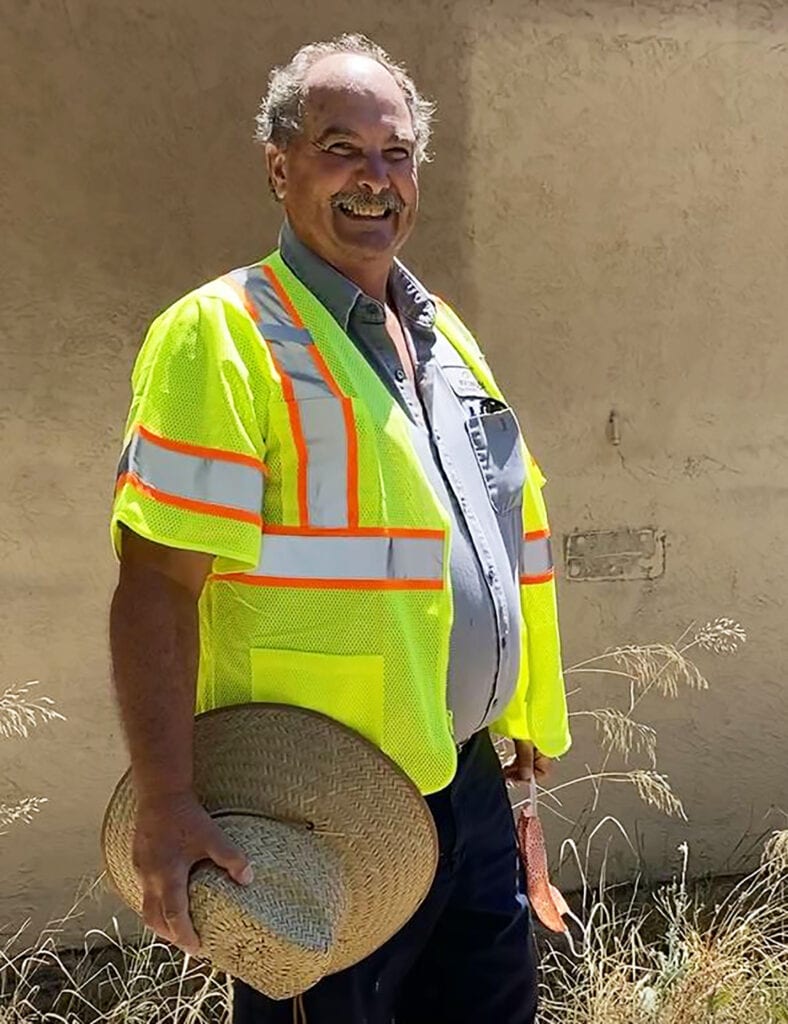 Jerry Dunaway,  senior maintenance technician, leads the city’s graffiti team. He says Escondido has seen “dramatic service level improvements using the digital solution. For example, in 2019 alone, the City of Escondido removed a total of 36,424 tags and completed 10,428 work orders—all with tags removed within hours of being reported.”

Dunaway added, “The numbers speak for themselves. I think it’s astonishing. When we were using paper, a worker would average about ten work orders a day. Now, each guy is doing about twenty-five.”

One fruit of efficiency is savings in labor costs. It also makes for more efficient law-enforcement as the police are alerted to hotspots of graffiti activity in the city. Van De Hey told Armstrong,

“Before, they couldn’t keep up with it all. Now, they’re not only able to take care of everything, but we’re starting to assign more work to them because they have more time on their hands than the amount of graffiti that is out there.”

According to Police Chief Ed Varso, also quoted in the article, the Report It! app also helps to protect the city’s 152,000 residents. “Criminal street gangs use graffiti as their way of marking what they think is their territory or their neighborhood. It’s a warning to others to stay out of that area,” he said. “An uptick in graffiti is oftentimes a precursor to some sort of violent criminal act between gangs. So, if we allow that graffiti to remain, it compounds that problem. The faster that we can remove graffiti, the less likely it is to provoke some other criminal activity.”

Nyberg added, “If we continually allow an area to be tagged, we’re essentially giving up ownership of our city. We’re tasked with making sure that the city is available to everybody, so we want to reclaim every part of the city as quickly as possible. If the data is used correctly, we can get out in front of it and be proactive with our local law enforcement to stop it from ever happening. We have that predictive data.” 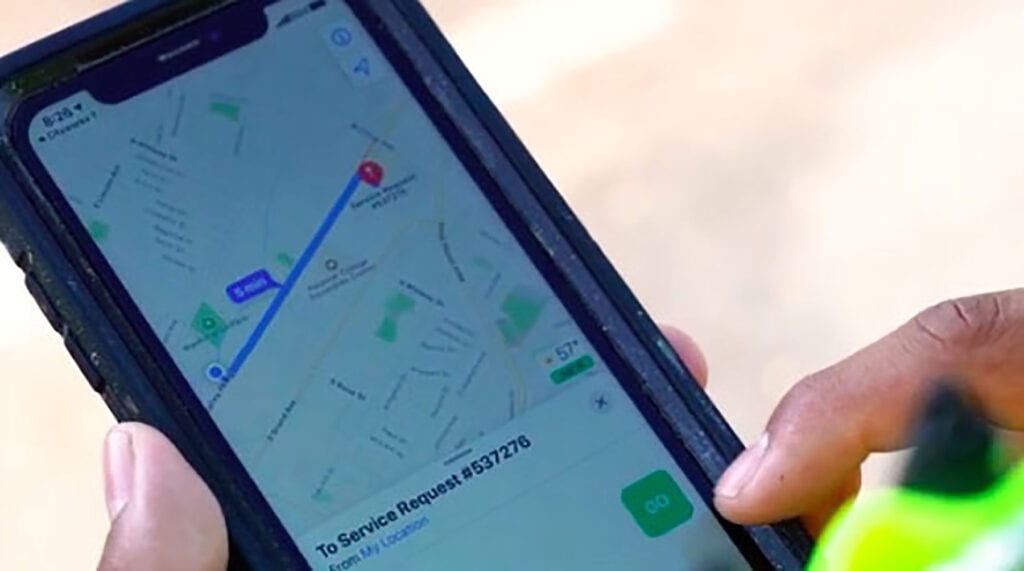 City employees are able to respond quickly to notifications of graffiti.

Escondido City Manager Jeff Epp gave another reason for why eradicating graffiti is good for business. “If you’re a corporate CEO and you drive through a neighborhood where there’s graffiti all over the place, you’re going to instantly have a negative first impression,” he said. “We don’t want that to happen.”

Dunaway concluded, “We mean business. This is our city. When I first started this job, the graffiti was all big stuff. Now, you have to look hard for the little stuff—two-inch tags on utility boxes or on the back of a sign. That tells me that we’re winning.”