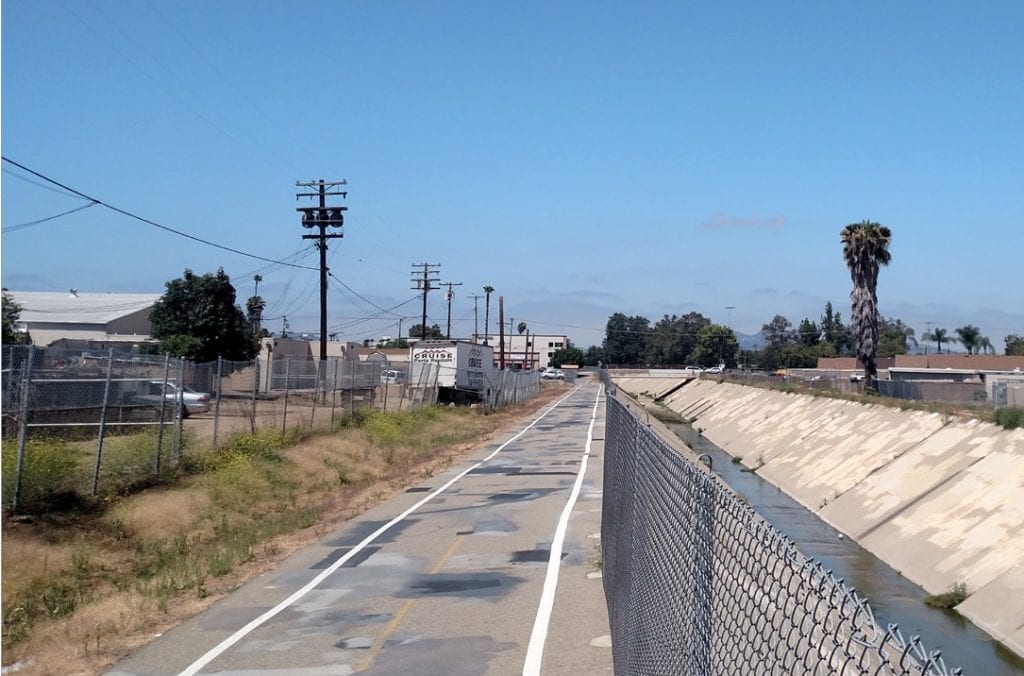 Some look at the Escondido Creek and see a cement culvert bisecting the city from east to west. Others see a nature trail run next to a running creek.

Both are looking at the same creek, just along different sections.

Last week Escondido applied for a $2,612,290 grant from the State of California Natural Resources Agency to fund a pilot expansion of the Escondido Creek Trail between Harding Street and Midway Drive. Currently, only one side of the Escondido Creek is open to the public. This pilot project will create a double-sided trail on about 0.85 miles. On one side will be the existing Class I bicycle path; on the other, a new DG trail.

The money the city seeks would come from Proposition 68, an environmental bond that the voters approved last June. It included $4 billion for state parks and environmental projects.

Joanna Axelrod, director of communications and community services told The Times-Advocate: “The City has been very aggressive about going after Prop. 68 (Parks, Environment, and Water Bond) grant funding. This is now the third grant that we’ve applied for this year.”

The first, aimed at Promoting Athletics and Greening at Kit Carson Park requested $1,118,000 to upgrade and expand the athletic fields and enhance drought tolerance, landscape resilience, and water retention. The city did not receive that grant.

“The City was just notified that we have moved forward to the next level of the competitive process which is a site visit happening in November. We’re very excited about that!” said Axelrod. 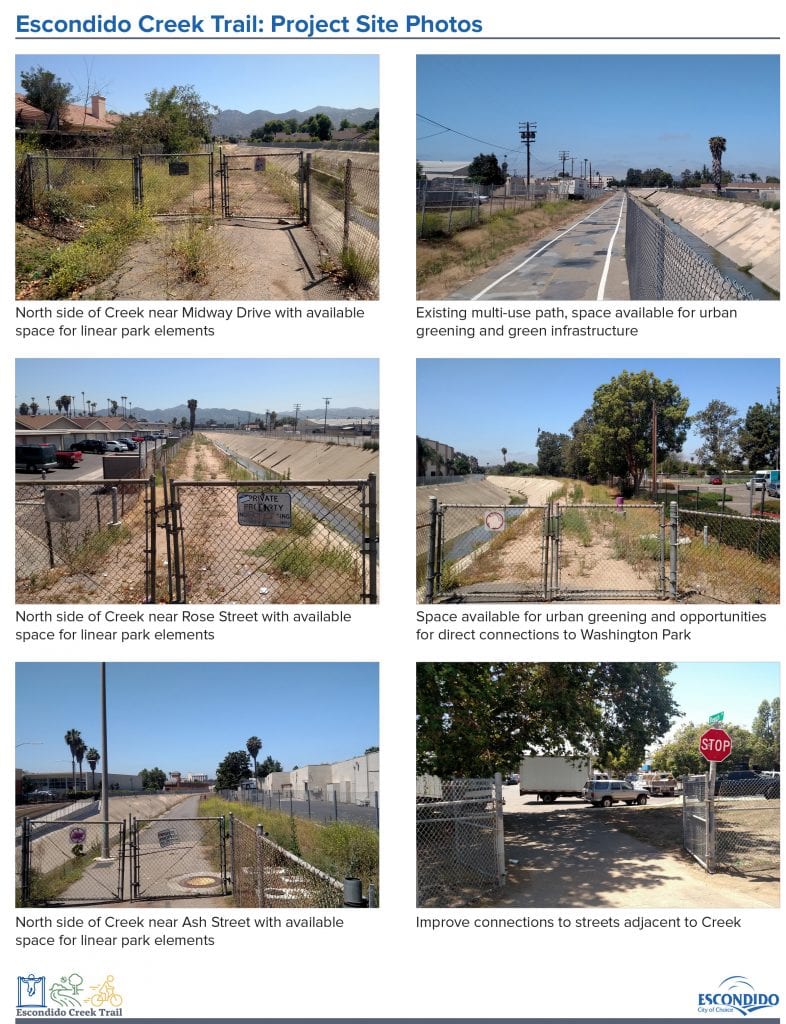 Various visions for the completed trail.

Having moved further along in the $8.5 million for the entire length of the creek the site visitation from a representative of the state will mean they have moved forward in the evaluation process.

The $2,612,290 Escondido Creek Trail Expansion Pilot Project would provide similar amenities to the one described above but to a much smaller section of the Escondido Creek Trail by providing recreational non-motorized infrastructure development and enhancements through the creation of a double-sided trail on about 0.85 miles between Harding Street and Midway Drive.

“This project would also improve access to Washington Park, a large urban park serving a significant portion of Escondido’s disadvantaged and severely disadvantaged community,” said Axelrod.“It will create DG paths that will be nicer for walkers and joggers, softer on the joints. There would be separate from the bikes and skateboard paths for people who move a little bit slower. We will also add lighting and sensing,” said Axelrod. There would also be fitness stations and places to refill water bottles.

Other amenities would include decorative murals and other public art aspects. “We will add native landscaping like the idea of a pocket park,” she said. Still most of the creek trail is concrete culvert. “At the eastern end it is natural. There isn’t too much we can do about the concrete, but we are trying to make amenities.”

“We might be able to get both grants,” said Axelrod, and that would not mean overlapping grants. “Even the $8.5 million wouldn’t fund the full improvements,” she said. “There’s always room for more. We would have to negotiate with the state to accept both.”

Each pot of Prop 68 money has a different maximum funding amount and is overseen by a different resource agency, and has different scopes and requirements.  “We’re casting a wide net and doing all that we can to secure funding because we know this is something the community really wants to see come to fruition,” said Axelrod.

A lot is going on with the Escondido Creek Trail, so the city is trying to keep a page updated with information as things develop. 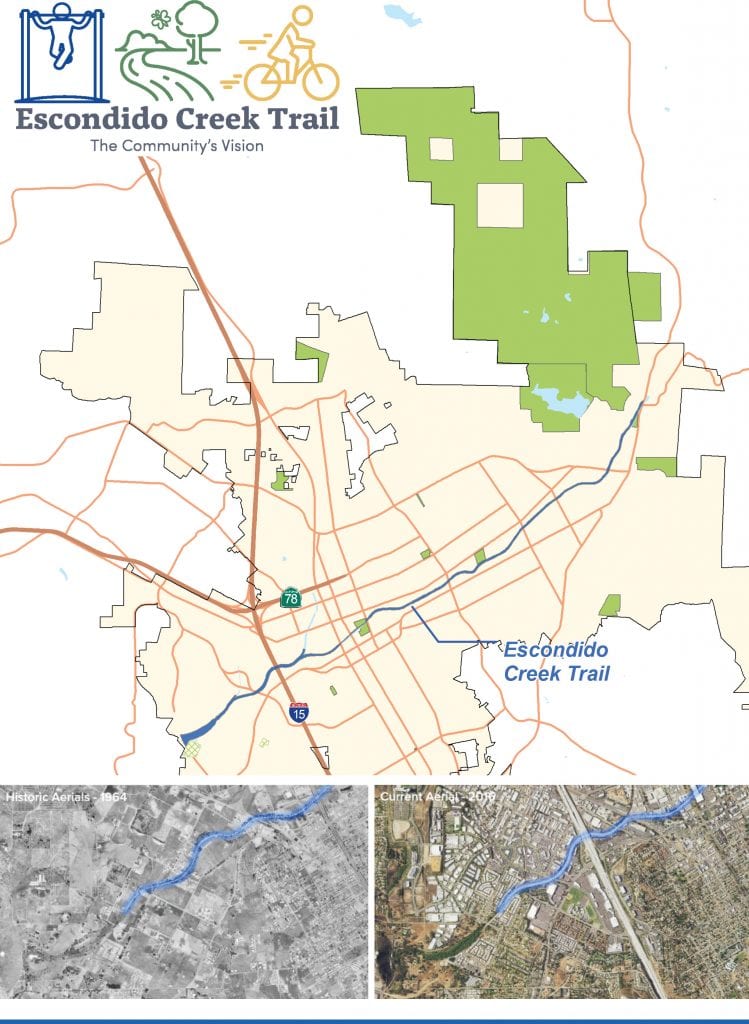 North side of Creek near Midway Drive with available space for linear park elements.