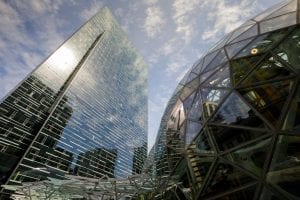 Amazon has announced what amounts to a nationwide “bidding war” to site a second Amazon headquarters on par with its Seattle campus (see photo). Yes, the company is so big, it needs two headquarters.

Last week, Amazon released a Request for Proposals (RFP). Only one submittal per metropolitan area will be accepted.

Michelle Geller, Escondido’s economic development manager, told The Times-Advocate: “We don’t have any suitable sites in Escondido (Amazon is looking for 200 plus acres). Having said that, having Amazon locate their second HQ anywhere in SD county will be of benefit to the entire region given the scope of the project, and Escondido is 100% behind any site proposed as part of the EDC package. I participated in a conference call last week with the EDC and other cities in the county about this, and will be reviewing the proposal once it’s available in draft form.”

Amazon is one of the largest tech companies in the world. They are looking for a new location with a diverse population and a wide range of amenities.

As part of its search for what it has dubbed “HQ2,” Amazon also wants to know about traffic congestion, lists of universities and statistics on the qualifications of local workers. A winning city may have to offer a package of tax incentives as part of the deal.

If Amazon were to locate its new HQ2 to sunny Southern California—which would be a major change from rainy Seattle—the project could create as many as 50,000 new full-time jobs with an average annual compensation exceeding one hundred thousand dollars ($100,000) per employee.

Those jobs, according to the Amazon will include executive/management, engineering with a preference for software development engineers (SDE), legal, accounting, and administrative. By the way, the company refers to its employees as “Amazonians.”

Amazon is considering greenfield sites, infill sites, existing buildings, or a combination for the Project, which the company estimates could ultimately cost $5 billion in capital investments.

To get an idea of the scale we are talking about, the Seattle headquarters, which moved to Seattle in 2010, has 33 buildings, for a total of 8.1 million square feet. It houses 40,000 employees and cost $3.7 billion.