City nominated for ‘Ruby Award’ for rehabilitation of affordable housing 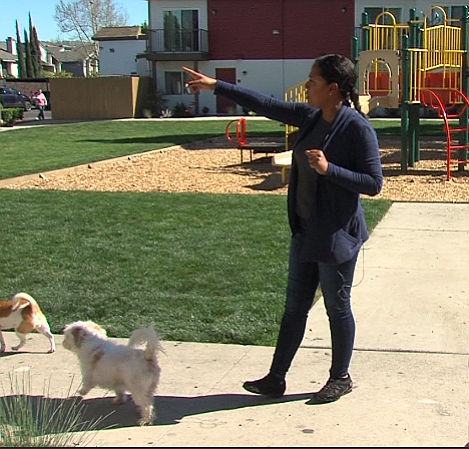 Above: Mariela Johnson points out the security cameras near homes in the Manzanita apartment complex in Escondido, March 14, 2017. (Katie Schoolov/KPBS)

The City of Escondido has been nominated for a Ruby Award by the San Diego Housing Federation (SDHF) for its support in assisting Community Housing Works. The nomination project preserved and rehabilitated 200 affordable housing units that are located at the Manzanita Apartments (formerly the Cypress Cove Apartments).

One of SDHF’s signature events, the annual Ruby Awards is the county’s largest affordable housing industry recognition event honoring the best people, projects, and achievements during the past year. Every year, hundreds of housing and community leaders from across the region and around the state will be on hand to applaud winners in more than a dozen categories and be inspired by their achievements.

2017 Ruby Awards will held be on Thursday, June 1, at the Prado in Balboa Park

The Ruby Awards recognize excellence in affordable housing and community development, highlighting the accomplishments of people, agencies and developments that work to ensure all San Diegans, regardless of income, have a safe, stable place they can afford to call home.

KPBS recently featured Community Housing Works and its renovation of the Manzanita Apartments at 260 North Midway Drive. The City of Escondido invested federal HOME funds in the project and aided in preserving 200 affordable housing units.

The article notes that San Diego County lost 3,500 affordable housing units in the last two decades while more than 2,000 low income homes reverted to market rates.  The article notes that one reason for this decline is that state law requires cities to report how many homes are built for low, middle and high income, but not to report how many are lost.

The renters at Manzanita were among the lucky ones when Community Housing Works purchased their complex three years ago for $25 million, according to the KPBS report.  The company spent $8.3 million to renovate, while the city of Escondido contributed $1.5 million to that program.

You can find KPBS’s full article at this website: