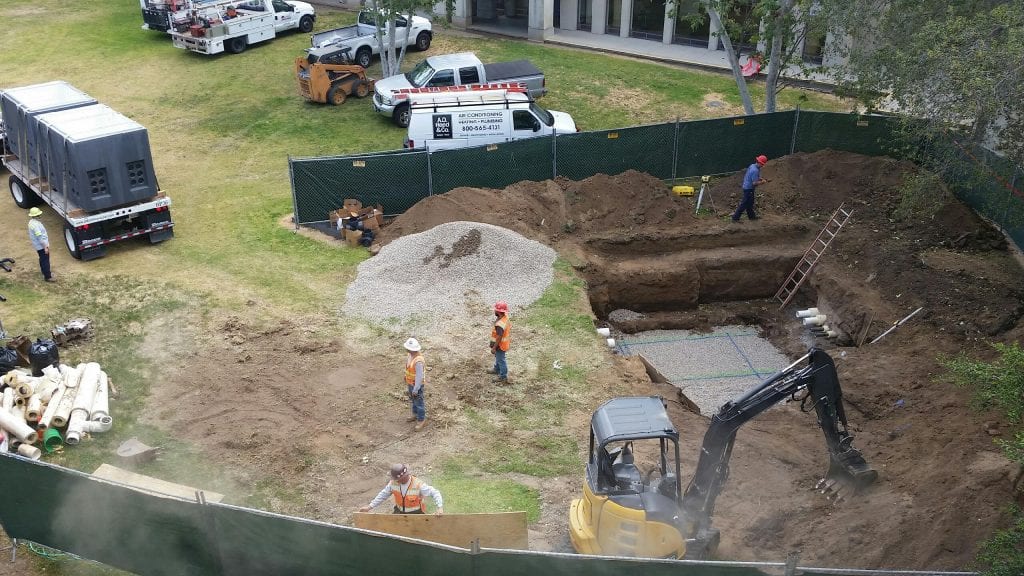 The air conditioning system at the California Center for the Arts, Escondido (CCAE) had a significant failure at the beginning of the month due to a damaged hot water pipeline that was installed when the center was built in 1994.

The City is working hard to make the much needed repairs in order to keep the Art Center’s patrons and performers comfortable. Air conditioning was restored as of last Saturday, April 21.

The repairs are expected to be completed by this Friday, April 27, according to Jerry H. Van Leeuwen executive director of the Center.

At the April 4 city council meeting the City Manager asked for and received funding for the emergency repairs as an   “expenditure to safeguard life, health, or property.”

The city contracted with A.O. Reed Inc. to carry out the repairs for $143,000. Since this amount is not included in this year’s budget, city staff is evaluating funding options and will be filing an insurance claim.

The HVAC (heating, ventilation, and air conditioning)  system at the CCAE includes four waterlines that were installed during the Center’s original construction in 1994. Two, 3-inch diameter pipelines supply hot water for the HVAC system to provide heating for the CCAE’s buildings.

Two 6-inch diameter pipelines supply cold water for the buildings’ air conditioning, as well as the Conference Center’s large kitchen ‘walk-in’ refrigerator and freezer units. These four pipelines parallel each other and extend beneath the lawn immediately east of the CCAE Lyric Court.

A hot water leak was suspected in February due to the increased water required to supply the HVAC system. The city hired a leak detection company and the water line was isolated in March.

The leak is occurring several feet underground where the pipes are encased in a 9-foot by 9-foot by 5-foot solid concrete ‘thrust block’ that must be removed in order to conduct the repair.

The city sought out a contractor to complete the repairs and settled on A.O. Reed. Repairs began on April 9.

The leak has been severe and had increased to an estimated 1,000 gallons or more per day by the time repairs commenced.

The HVAC system for most of the CCAE campus, including the conference center kitchen’s large walk-in refrigerators and freezers, are integrated together and function as a single unit.

Accessing the leaking pipe required powering down the entire HVAC system for heating and cooling at the center, and for the conference center’s kitchen’s walk-in freezer/refrigeration units.

The city has been coordinating with staff of the Center to minimize disruption to shows and other activities as much as possible.

The repair includes installing isolation valves, as well as a vault to access the waterlines in this location. In the future, staff will be able to manipulate the water flow serving the HVAC system allowing the campus buildings to be serviced independently.