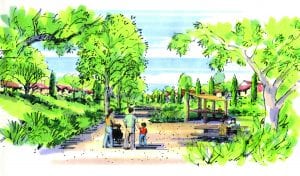 The Planning Commission October 24 voted to support the recommendation of city staff and support the 380-unit “Villages of Escondido Country Club” project by New Urban West Inc. (NUWI) which is acting on behalf of Michael Schlesinger of “Stuck in the Rough.” The climax of what has been an epic multi-year struggle between Schlesinger and the homeowners of the area, who have organized as “Escondido Country Club Home Owners,” could happen with the city council vote next Wednesday, November 17.

The council meeting will begin at 4:30 p.m. in the council chambers. ECCHO members are expected to pack the chambers in what their leadership has a now or never moment.

“It’s not over – now is not the time to give up!” a defiant ECCHO board said in an email to its members this week. “Show up and be counted. The Planning Commission voted to recommend approval of the project to the City Council but we still have time to voice our objections.”

ECCHO added, “The ECCHO community is not against development but we want a reasonable and responsible project that is consistent with the character of our existing community and keeping the 2012 General Plan at the current R-1-7 zoning.”

The email also called on members to write letters to the mayor and council members. “This may be your last opportunity,” it said. “We have only one chance to get this right! We can and will do better! We must!”  It encouraged ECCHO members to wear ECCHO buttons or something green when they attend the meeting.

So far, Mayor Sam Abed has stated publicly that he felt the density was too high. It is unknown what position other council members will take, although three years ago when Prop. H was on the ballot council member Olga Diaz supported Schlesinger’s proposal.

Schlesinger has had an extremely bitter battle with the residents of the Country Club area. It included an incident where he dumped a load of chicken manure on the defunct golf course and led to the Prop. H election almost exactly three years ago, in which Schlesinger’s proposal for a 430-unit development was defeated by a large margin of the voters.

After that defeat, the city council attempted to put much of Schlesinger’s property into open space, only to be defeated in February 2015 when Schlesinger took the city to court.

ECCHO residents urged the city to appeal Mass’s ruling, but the council declined, and instead reached a legal agreement with Schlesinger, which stipulated that a development would be proposed by New Urban West Inc. (NUWI.) By the terms of the agreement Schlesinger was not supposed to be involved in any part of the development’s planning or in further negotiations with the city. 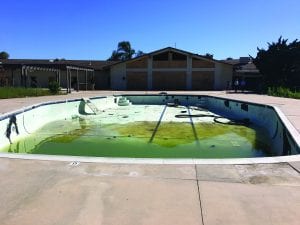 Until some proposal is adopted by the city, the old Escondido Country Club property will remain fenced and undeveloped. This photo is of the old country club swimming pool.

Schlesinger originally started with the goal of 600 homes when he bought the property at auction in 2013. That number had fallen to 430 at the time of Prop. H. The current proposal by NUWI is for 380.

The proposed project is located on a golf-course that no longer is in operation.  The existing zoning for the 109-acres allows for single-family development, with a minimum lot size of 7,000 square feet.  A General Plan amendment and Zone change request would create a Specific Plan for this area, which will bring together detailed policies and tailored regulations for a focused development proposal.

The new land uses proposed for the Villages Specific Plan Area include three single-family residential villages; an open space system; and a clubhouse area with recreational, social and farm amenities.

Readers who want to educate themselves about the project can find the project status, Final EIR and appendices, Specific Plan and other related information can be accessed on the City’s website (www.escondido.org)

The following statement was submitted to the Times-Advocate from Jonathan Frankel, project manager for New Urban West, after this article went to print:

“We are grateful to the hundreds of country club residents — namely the members of Renew Our Country Club — who worked with us in creating this proposal to revitalize the community. The plan will restore the pride and prestige of the area, positively impact property values, and finally get the current property owner out of the picture forever. We are hopeful that the city council will vote to approve it.”

“The proposal would create three distinct villages surrounded by a 29-acre green belt with miles of trails, and include a new $10 million clubhouse with a pool and workout facility.  In all, nearly 45 percent of the property would be preserved as open space.”

One response to “City council vote Wednesday on NUWI project”