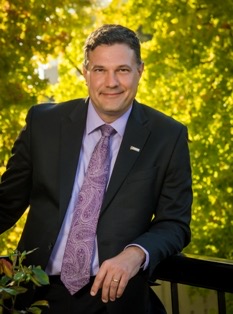 Last year, current City Manager Jeffrey R. Epp announced his retirement, which launched the search for his replacement. Epp agreed to continue his tenure while the City Council conducted the nationwide search for a successor. The search concluded, and the Escondido City Council unanimously voted to appoint Sean McGlynn. He has been serving as the City Manager for the City of Santa Rosa for the past six years.

While making the announcement to the City employee team, Epp shared, “Sean was described by his references as energetic and intelligent, with a ‘big picture’, inclusive and collaborative leadership style and yet it was noted that he is not afraid to make decisions. I have had the pleasure of getting to know him recently, and will also tell you that he is simply a really nice guy. I am so thrilled to hand the baton to him as Escondido continues to move forward.”

Santa Rosa is a city with a population of 180,000, roughly comparable to that of Escondido. In 2020 McGlynn was awarded the City Manager of the Year award by the California City Management Foundation, which praised him for his “leadership throughout one of the deadliest wildfires in California history. As he continues to run the day-to-day operations in Santa Rosa, McGlynn has worked to address the social, economic and emotional toll in the wake of over 3,000 homes being destroyed and over $1 billion in damages. Despite these demands on his time and energy, McGlynn has offered his advice and support to fellow City Managers dealing with similar disasters.”

Before running Santa Rosa, he was Interim city manager of the City of El Paso, Texas and deputy city manager in 2014.

McGlynn has served in local government for 18 years. Prior to his leadership at the City of Santa Rosa, he was the deputy city manager of El Paso, Texas. McGlynn spent time at the New York Opera as the Associate Director of Education Programs. He is community-focused and a strong supporter of collaboration and leadership development. Sean led the City of Santa Rosa through the Tubbs Fire response in 2017. He made a documentary film, Last October, recognizing the heroic efforts his team demonstrated during and in response to the wildfires. In addition, he was named the 2020 City Manager Foundation’s “City Manager of the Year.” McGlynn holds a BA in History from the University of Pittsburgh and a MA in Theater from UCLA.

McGlynn has a connection with the arts and the world of nonprofits. One reason that he was attractive to the council members is because of the city’s California Center for the Arts. Escondido would like to leverage it to bigger and better things.  From 2013-2014 McGlynn was deputy city manager for development and tourism for El Paso and before that director of museums and cultural affairs for five years.

He has also been a director of finance and strategic initiatives, an adjunct instructor at the Metropolitan College of New York and the Associate Director of Education for the New York City Opera for three years ending in 2002.

In an interview with the North Bay Business Journal, McGlynn confessed that he once wanted to be in theater: “I wanted to direct plays — Shakespeare and modern pieces, including Suzan-Lori Parks (first female African American to win Pulitzer Prize for Drama, 2002), classical to contemporary. My true love was the stage. I worked in the cultural community in New York. We tend to be more forgiving of mediocrity in the film world than in the stage world. Some of that is the financial investment you have, a movie that cost you $12 or a theater experience that cost you double or triple that amount.”

He was in New York City on the day of 9/11 and described his experience in the same interview: “I was in the city that day, coming out of a meeting, trying to figure out what was transpiring. I could see smoke in the building. It was a beautiful September day, gorgeous. People were out. It wasn’t just a fire; it was an attack. I was separated from my wife, who was transiting into the city in the subway, had to go underneath the World Trade Center before they figured out what was going on.

“The cell phone system collapsed under the weight of demand, and a lot of the infrastructure (cell towers) was located there. Being disconnected from my wife for a period of time was spooky. Later, for the longest time, when I would look at the skyline, I would get a phantom image of where those twin towers were, a ghosting moment. That was part of the cityscape — and then they’re gone.”