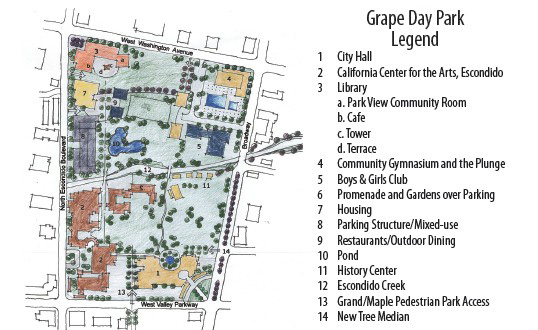 Concept of a possible Grape Day park expansion, including a new library. The map was created by architect Ken Erickson.

The Escondido City Council October 19 directed Manager Graham Mitchell and city staff to further explore the feasibility of relocating and expanding the Escondido Public Library within an envisioned expansion of Grape Day Park and to issue a Request for Qualifications (RFQ) to public/private partnership companies with New Market Credit experience.

Note: The New Markets Tax Credit Program was created as part of the Community Renewal Tax Relief Act of 2000. Its goal is to energize revitalization efforts of low-income and impoverished communities. The NMTC program provides tax incentives for entities that invest in low income communities and people. The concept was birthed in the 1990s when various foundations and think tanks worked to sell the idea of using business oriented programs to create wealth and jobs in poorer cities.

The staff report followed up on the March 23 meeting when the council directed staff to do a feasibility study on relocating the library to Grape Day Park.

Mitchell reported that staff identified two feasible locations for the new library— one within the current Grape Day Park boundary and the other in an envisioned expansion of Grape Day Park.

In 2010 the council began exploring expanding the existing library. This culminated in a presentation in 2013 in which a 73,000 square foot library was submitted for consideration.

Following board direction in March of this year, staff has been working on two sites. One, within the existing envelope of Grape Day Park and, utilizing the right of way the city has on Woodward, would build the library towards the California Center for the Arts, Escondido (CCAE). “We control the land,” said Mitchell. “It’s flat.” The land contains no contamination that the city would have to mitigate.

The second site would involve relocating some businesses, purchasing private land, and would be located near the intersection of Washington & Escondido Boulevard.

“As we studied the possibility of this,” said Mitchell, “It married closely with the conversation that occurred in March 23, in which Ken Erickson’s plan was mentioned.”

Erickson, a local architect, developed the plan that is reproduced on the front page.

“What staff liked about Site 2,” said Mitchell, “was its ability to become transformative for the whole area. Site 1 would not really fit with what’s going on with the concept of what the library could be. Site 2 is across the street from tired commercial that has the ability for redevelopment, and could create an economic engine. It could become a transformative project for the city.”

Site 1 has no contamination problems. Contamination from a former gas station has been cleaned up. At Site 2 there is a closed leaking underground tank, and an upstream plume from a leaking tank. Both would need to be addressed if a project was to happen there, he said.

The fiscal ability of the city to pay for such a project will be the deciding factor. “The size drives the construction cost. We talked about the right size of the library,” said Mitchell, noting that everyone agreed they want to build a Next Generation Library.

“We didn’t want to present a 20th century library being built in the 21st century,” he said. They talked to high school and college students, to library patrons and the leadership of library organizations to get their ideas about what is lacking in the current library and should be present in a future library.

In the course of that study they concluded that the library’s footprint could be reduced from 77,000 SF, allowing more open space. “Once we had the size, we looked at development costs,” said Mitchell.

They obtained Erickson’s input on costs, and researched similar sized libraries to make sure the costs were on target.

Interestingly, both sites come in around the same amount of money required. Site 1 would require no land acquisition, no eminent domain, just site development. Its challenge is that it would eat up existing parking along Escondido Boulevard, so it would need a parking structure with some underground parking. It comes in at about $54 million.

Site 2 wouldn’t need a parking structure but, because it would expand the park’s footprint through land acquisition, would pencil out at about the same, give or take a million: $54.5 million to $56 million.

“We also looked at funding sources,” said Mitchell. “We asked: is this project feasible.” He noted that the city would probably be able to realize $2.5 million from selling the site of the existing library. “If there is a right partnership we could attract twenty percent of the cost in new market tax credits.”

The 2013 study had suggested a bond measure of up to $39 million. “We believe that the cost of moving the library would only be a small percentage bigger. We believe that this is a fiscally viable opportunity. Both sites have similar costs. We believe that with appropriate leveraging, twenty-five percent could come from non-taxable sources.”

That means that finding a partner is “vital,” according to the city manager. At the same time, he said, the expansion project of the existing library looks less and less appealing.

“Spending that much on a building that age doesn’t make sense,” said Mitchell. If the council wants to go forward with a library at Grape Day Park, it needs to decide on Site one or two. “The general plan calls for an expansion of the park, so this fits in with existing goals,” he said.

It is important, he said, that the library be compatible, rather than compete with the CCAE. “Partnerships will be the key,” he said. “Great new libraries that are being developed all over the world have partnerships, a component for another public or private use. Ultimately the biggest consideration is do you want to use this as a project to expand Grape Day to Washington Street?”

If the council chooses Site 1, the next step would be to do a bond analysis, he said.

If it chooses Site 2, a bond analysis would also be needed, plus working with adjacent property owners to acquire the necessary land.

Mitchell recommended submitting the plan to the “market” i.e. the public to determine if the public support is there to “build an iconic library, to generate economic opportunity and the opportunity to leverage the land to pay for some of it though a private or public partnership.”

He recommended issuing a Request for Qualifications (RFQ) to see if qualified entities are interest. “It now one is interested, we will hear about it. It gives the council an easy “gut check” to see what the possibilities are.

Council member Mike Morasco asked if Mitchell has seen any libraries such as what they envision. Mitchell said that in a recent trip to Long Beach he saw that the city had done this process, redeveloping its library, building a new park and tying it to new housing.

“The model exists,” he said.

Council member Ed Gallo asked why a parking structure was not required for Site 2?

“We believe parking could be shared with existing parking. The Center needs parking in evening and the library needs it in the day,” said Mitchell.

Speakers at the rostrum were supportive of moving forward.

Lucy Berk, a member of the Pioneer Friends Board, told the council: “Escondido does its very best when it aspires to do a great civic project” An expansion “is the sensible, aspiring, exciting, thrilling thing for the city to do,” she said, adding that she liked the idea that the library plan was locally inspired.

Steve Nelson, of the People to the Park Organization, said his group is willing to help rally community support for the expansion. To provide visuals and support “for big ideas.” They look forward, he said, to “an Escondido that is created and designed by Escondidans.”

Jack Anderson, chairman of the Escondido Library Foundation Board, supports the expansion of a new library but also supports a new or expanded library. “The need for the new library is compelling,” he said, but added, “but we don’t want it to be a pawn in a greater project.”

Anderson added, “The need is even greater for the 21st century library that we want to have for our community. “Long-term visioning is critical. Our view is that we need it sooner rather than later and Site 1 brings us that need.” Site 2 “really has some unknowns,” he said.

Because Site 2 would require eminent domain, which would take extra time, his group endorses Site one. He asked, “Is there a sustained city council political will to see this to its conclusion without the library being a pawn that falls off the chessboard?”

Ken Erickson, who favors Site 2 with an expanded park, called the proposal, “a really important potential project that will push Escondido to the next level.”

He added, “We favor Site 2 with an expanded park. It’s bold, it’s big and we believe it will change Escondido. Need. There is a lot of interest in moving and living downtown, and it needs dedicated open space. We feel this sustains pride in place.”

Saying that the proposal is exciting, he said, “All walks of life will have something to do here. This kind of development stirs increased commerce, increases real estate values, and inspires existing residents to stay.”

Cynthia Weir, chairman of the California Center for the Arts board, expressed interest in the future of Grape Day Park and its impact on the Center. She said her board is concerned about parking. “We are very interested in the future of the park, and the benefits of incorporating a library. We are supportive of intentionally bringing people to the center. More people brings more people to our mission.” She wondered if bringing the library to the park might expand how the library may serve the community and possibly incorporate the STEAM (science, technology, engineering, arts and math) approach. “I’m excited and intrigued by the possibilities.”

Elmer Cameron, Escondido, president of Friends of the Library, said the new library is a great opportunity, and believes the community needs to be engaged in the project. “The big task is to engage the community, to reach out, to educate them and show them it’s a good idea, and what it will mean,” he said.