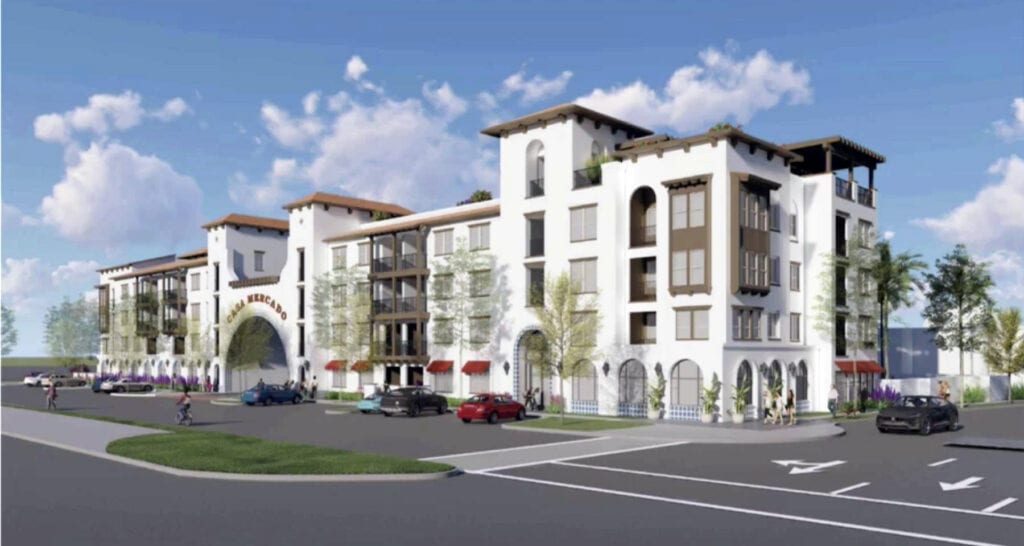 Artist’s rendition of 120 unit condo approved by the city council.

The Escondido City Council May 12 returned to its labors in the council chambers at City Hall, with members look each other in the eyes, after more than a year of virtual meetings. The meeting was held with masking and social distancing.

It started off with several residents unhappy with the council over how it runs its police department, and demanding accountability over the shooting death by a police officer of homeless man and veteran Steve Olson.

Several called for a police oversight committee, and for transferring funds from the police budget to “community care.” They also wanted to ban “single use plastics.”

Frida Gonzales declared, “Your police department is distrustful and irresponsible,” and said police do not wear facial coverings. “How can we trust them to protect us?” She added that the fact that Olson went through the system 180 times was “infuriating.”

Dante Coleman said, “A man was murdered in your city. By the same city you work for, the same government killed him.” Saying he was tired of visiting various city councils and “asking them to do better,” he said, “We demand that you do that job and lead.” He too called for an independent police oversight committee. “We need justice for the extrajudicial murder of Steven Olson!”

Speaker Kevin Stephenson concluded with “We have not forgotten about Steve Olson. We want accountability and justice. We need to reorient some of the funding for police into public housing and cannabis equity. We need to reject environmentally damaging housing projects.” He too was against single use plastics.

By a vote of 3-2 (McNamara and Martinez voting no) the council approved a request for a 120 unit condominium project within the Mercado District. The project by Renovation Realty Inc. is located at 235 St. Pine St. and is bound by 2nd Avenue, 3rd Avenue, Quince and Pine.

1. Amended the Downtown Specific Plan to eliminate the ground-floor commercial requirement and permit ground-floor residential units within the Mercado District, along with a Master Development Plan to allow the proposed site development with a reduction in open space, setbacks, and parking provisions;

2. Approved the project for 120 condo units and vacating right-of-way along portions of West 3rd Avenue, South Pine Street and a public alley.

Jay Paul, senior planner, reported that the 2.33 acre mixed use commercial and residential project will be created from 11 parcels. It abuts the Mi Guadalajara restaurant. It will consist of two buildings of four stories of up to 60 feet with a flyway separating them. There will be an outdoor pedestrian plaza.

Besides the 120 condos, there will be 179 parking units in a courtyard. The developer is allowed less than the normal parking since it is a couple of blocks from the transportation center. To make the density the city wants, the developer is allowed a 49% reduction in total open space, with a requirement that it pay an in lieu fee to the city, with the fee used to buy parks elsewhere. The open space will be used for an outdoor pool and a recreational area at the ground floor and rooftop recreational amenities.

One amendment to the Downtown Specific Plan allows the developer to have ground level residential units.

Because the development is considered “infill” it is exempt from requirements of the California Environmental Quality Act (CEQA.)

One of the owners of Mi Guadalajara, Maritza Rualcaba spoke about the family’s concerns of parking for the new development. “We struggle a lot with parking,” she said. “We feel this problem is going to get worse and public parking will be taken away from us. We don’t feel it is fair if we get pushed out of public parking.”

They fear extra residents would “possibly be running around, coming possibly to our parking lot. It doesn’t feel like there is going to be enough space for everybody. This project doesn’t have enough parking for residents.” Rualcaba said they hoped Pine Street parking would remain public and not just be for the new residents.

The restaurant has about 60 parking spaces on its property.

The Planning Commission had voted 4-3 for the project, and the concerns of the minority were taken up by Councilmember Consuelo Martinez. She said the project involved, “many changes and exceptions.” She was concerned about it being exempted from the CFD. “That is something the city adopted last year for development to pay for itself,” she said. “I’m concerned with any projects that don’t want to be part of it. We always have rising costs and I don’t want to continue that trend.”

A representative of the Mercado developer, Paul Mayer, said city staff was “adamant about maximizing density but it is literally impossible to build to that density and still maintain the 300 square feet of open space per unit requirement.”

Mayer said that because his company literally couldn’t provide 300 SF of open space and meet staff density requirements, it should pay in lieu fees based on 200 SF.

“Their primary concern was foot traffic or vehicular traffic flowing into their property,” said Mayer. “We would construct a low wall in the alley edge of the property with two electronically controlled gates, to create a barrier. We also agreed that employees of the property would not park on 2nd avenue. I had been told those addressed the family’s concern.”

Martinez said the in lieu payments should be dedicated to creating new parkland. She also wanted the 300 SF requirement to stay.

He added, “I would like it clearly understood that the parking on the eastern end of the development is expected to be open to the public. I drive by the restaurant and there is definitely a lot of parking now.”

Director of Community Development Mike Strong told the council that the “scope of the project does reflect staff’s recommendation,” including current regulations of 300 SF of open space per unit. “The council has authorized a study of open space downtown [which might lead to the requirement being eased] but we don’t know what the results of that study will be,” he said.

Deputy Mayor Mike Morasco said he was satisfied with the agreement “that staff has reached over three years to qualify them.”

Longtime Escondido attorney Jim Lund, who represents the restaurant owners, said he and Mayer had worked out a solution whereby the developer would erect a blocking wall and gates to prevent residents from freely using restaurant parking and walking through it. Paul Mayer came forward to give us a back fence that would have the look and feel of the rest of his project.” He added, “We are concerned about the parking but not opposed to the project.”

In moving to approve the project, Morasco said, “We should agree to honor this as a pipeline project.”

Councilmember Tina Inscoe called Mi Guadalajara, “one of the icons of Escondido. I understand their concerns and it comes down to being good neighbors.” She added that vertical gardens might be a nice rooftop amenity.

Mayor Paul McNamara declared, “I’m really concerned about this project. We’re really close but it’s not quite ready for prime time. I’d like to see it come in as a complete project.” He said the project should include a CFD. “We’ve been doing this for years and years and we are out of money. I think it’s ridiculous that we are asking other people to pay for what you [the developer] should pay for.”

Martinez felt the developer and restaurant should have their agreement in writing for the city to review. “It’s a good idea to get that in writing and not to rush this through. I think that would be the prudent thing to do.”

She and McNamara were outvoted, 3-2.

Find out more about Mi Guadalajara by visiting www.restaurantji.com/ca/escondido/mi-guadalajara-restaurant-/