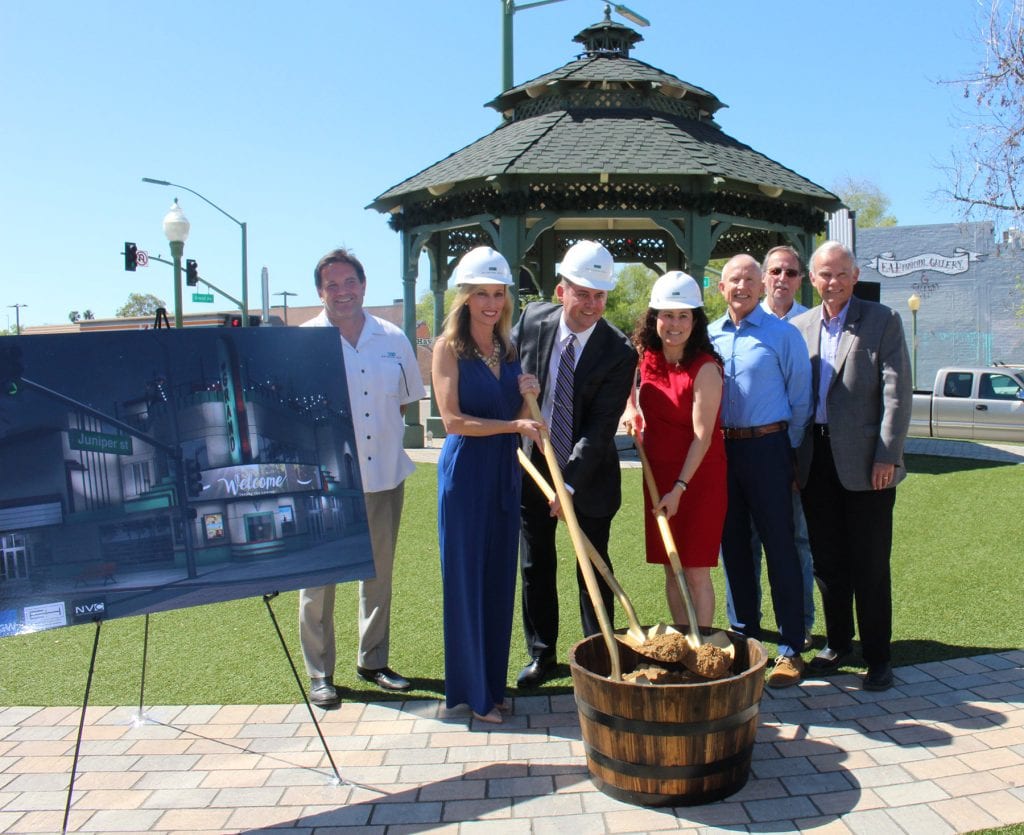 About 150 city residents, officials  and members of the New Vintage Church gathered Saturday morning at the Heritage Garden gazebo across Grand Avenue from the old Ritz Theater to celebrate a new beginning for that corner, and possibly for Grand Avenue itself.

That end of Grand Avenue was once, in bygone days, known as the “black sheep” of the downtown area, according to former city councilmember Ed Gallo. In those days Grand ended at Juniper. Those were the days when the Ritz theater had turned into the Pussy Cat and just down the block was the F Street Bookstore.

The days of that end of Grand Avenue as anything other than a bright, shining star appear to have come to an end with the building project that could begin a renaissance of the Avenue. Or, as Pastor Tim Spivey put it: “defibrillated to once again pulsate with life.”

About 200 people attended the groundbreaking in a morning of bright sunlight that was a change of pace for the season, and was perhaps itself a harbinger of things to come.

Pastor Spivey invited his listeners to envision “The Grand.” “The vision for the Grand began with a simple quest for the church to locate space to expand. It ended with the opportunity to help revitalize a city,” he said. “The Grand will be one-of-a-kind facility in the United States, a project that really does pull together the entire community. That is what makes this project unique. Community partnership.”

Spivey noted that the project, “has the support of the Planning Department, New Vintage Church, Escondido Chamber of Commerce, Christian and secular arts communities—numerous arts educators of our city—the vast majority of downtown businesses, and citizens. Perhaps there are many development projects that have that wide of a base of support. I see it as a modern miracle—a beautiful example of what can be done when all people of our city aim at the common good. Good things happen.”

Spivey related how they engaged “the community beyond the church from the very beginning of thinking about this project. Members of the arts community helped us conceptualize and design the theater. Coffee providers have helped conceptualize the corner coffee shop. The Grand will be building the community has designed together (with the help of some of the best architects literally in the world).”

Nevertheless, said Spivey, “New Vintage Church is unabashedly a Christian Church. We are proud of who we are, and, at the same time, we love the people of this community without condition or pretense, regardless of their faith perspective.”

In the seven years since New Vintage Church was founded, members “have cleaned the beds of Escondido Creek, and parts of our surrounding neighborhood that some wouldn’t touch. We provide shoes to children in need at local elementary schools, and Christmas gifts for the elderly. We support children, whether orphans and those in Foster Care in San Diego, or children in the 3rd world. Through our partnership with the San Diego Blood Bank, we have given our blood to this community… literally.”

They did that, he said, because they love Escondido. “We love the people of this city. And, we do these things because we believe in Jesus, who told us to love our neighbor as ourselves, and to do good to those around us.”

The church congregation views the Grand Project, “including the Restoration of the Ritz Theater to its former glory in both use and design—as a radical act of service to the city. We are willing to take on the sizeable cost of doing so, while upon its finishing playing the role of host and community servant,” he said.

Spivey said he hopes citizens of the city five years hence will look on the project and think,

“ ‘That was the best thing that ever happened to Grand Avenue,’ and enjoy for years to come, as a transformed and pivotal corner in our city is defibrillated to once again pulsate with life.

“In less than a year from now, our hope now becoming reality is they will come to this corner to enjoy art, the activities of their children, a good movie from a bygone era, original music, a great cup of coffee with a friend, or to learn how to play an instrument, and perhaps, encounter the love of their Creator. Any place where someone can do all of that is special. In fact, it’s Grand.”

Spivey thanked the city council, past and present and called its support “unwavering and unanimous.” He thanked Don Romo and the entire team at Erickson Hall Construction, “who have embraced the special nature of this project and have been willing to work quickly and honorably to put us on a timeline that made the project doable.”

He also credited Realtor Sabrina Covington, of Covington and Associates, and the Solomon Foundation, which is financing the project, the New Vintage Church Board of Directors, and his family, wife Emily, and three daughters—Anna, Olivia, and Norah— “for the sacrifices you’ve made over the last 18 months or so.”

Those who want to follow the progress of The Grand can visit newvintagesd.org, and thegrandescondido.com . Gaspar spoke about the riot of butterflies that recently erupted out of the desert and spread inland for a brief time after the rains brought them to life after many years of absence. She said it occurred to her that this project is like a butterfly chrysalis, filled with potential.

“Of course, the caterpillar can’t know the beauty that is going to emerge from the cocoon,” she said. “But we can.”

Councilmember Diaz said that for many years people had looked at this corner, or even gone inside and dreamt of the possibilities, “but never did anything.” She credited the “grit of this church to say ‘We are not walking away.’ ” She said she was excited that, “It’s not just a church exclusively. Everyone can walk in there. I’m really excited about this commitment.”

Stinson, representing 75th Assemblymember Waldron, offered “This is going to be a major component of Escondido as it revitalizes. I want to go to a movie here.” 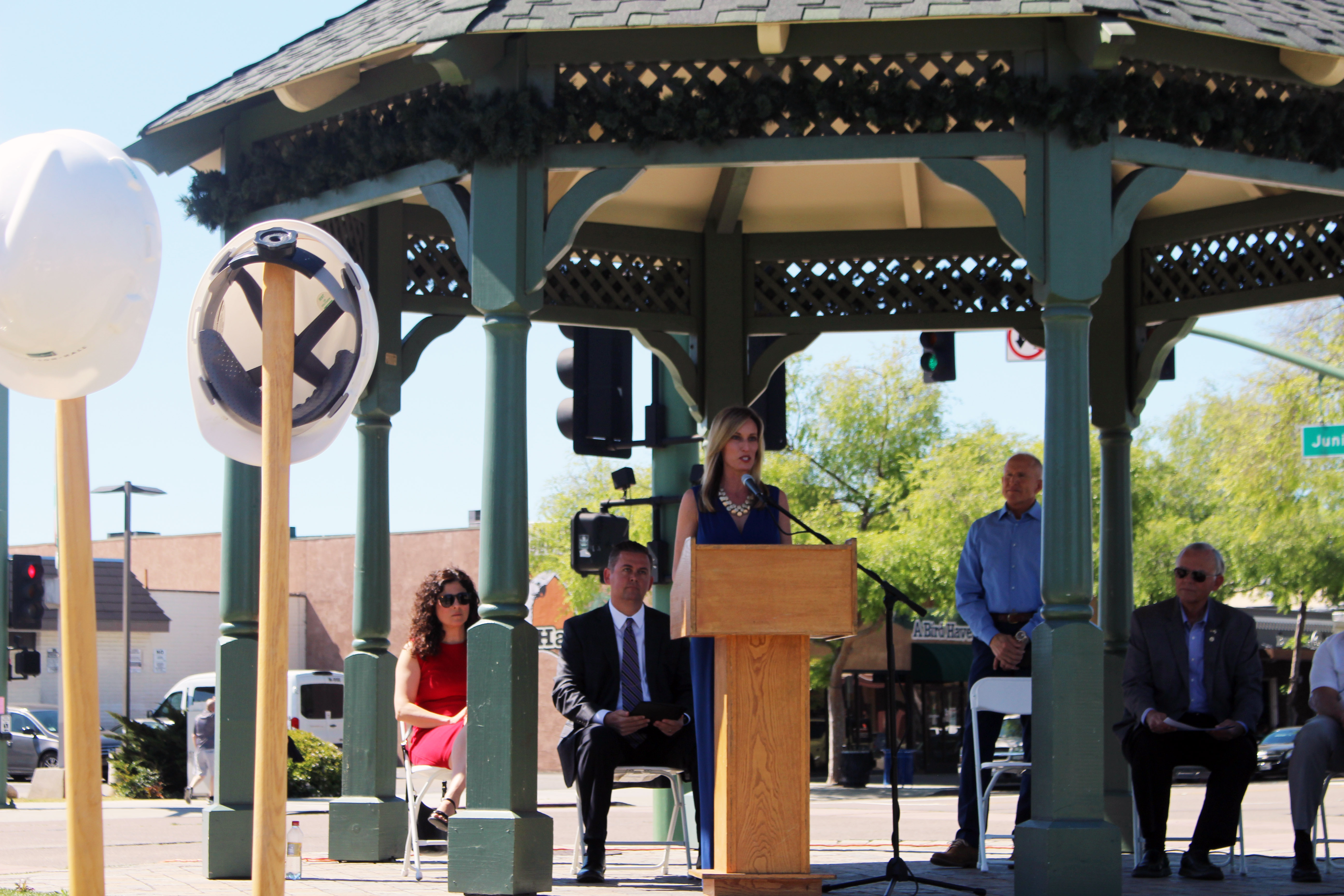 Supervisor Kristin Gaspar of the 3rd District giving opening remarks at Saturday’s groundbreaking for “The Grand” project, which will renovate the old Ritz Theater. 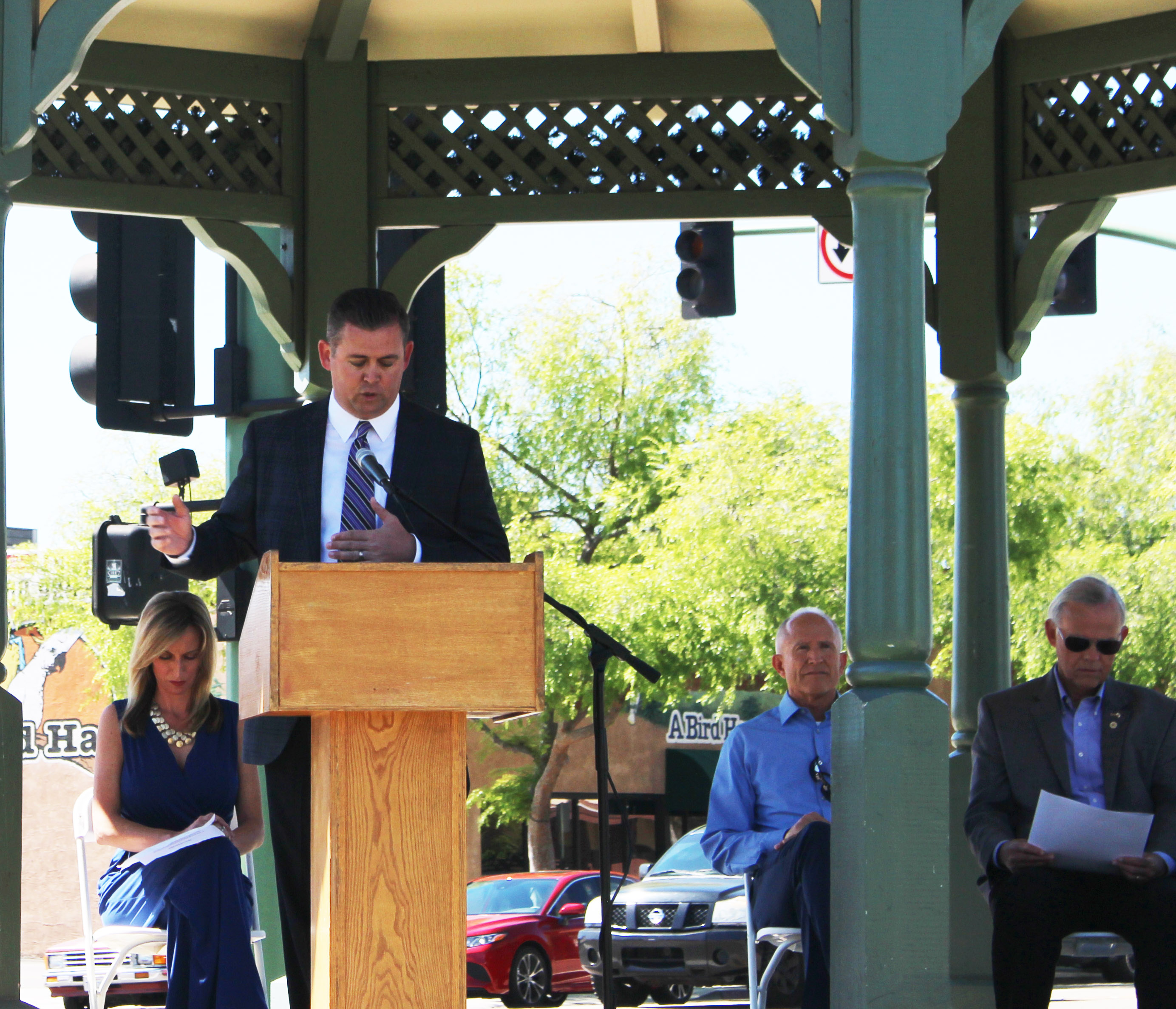 Pastor Tim Spivey of New Vintage Church speaking at the groundbreaking for “The Grand” project. 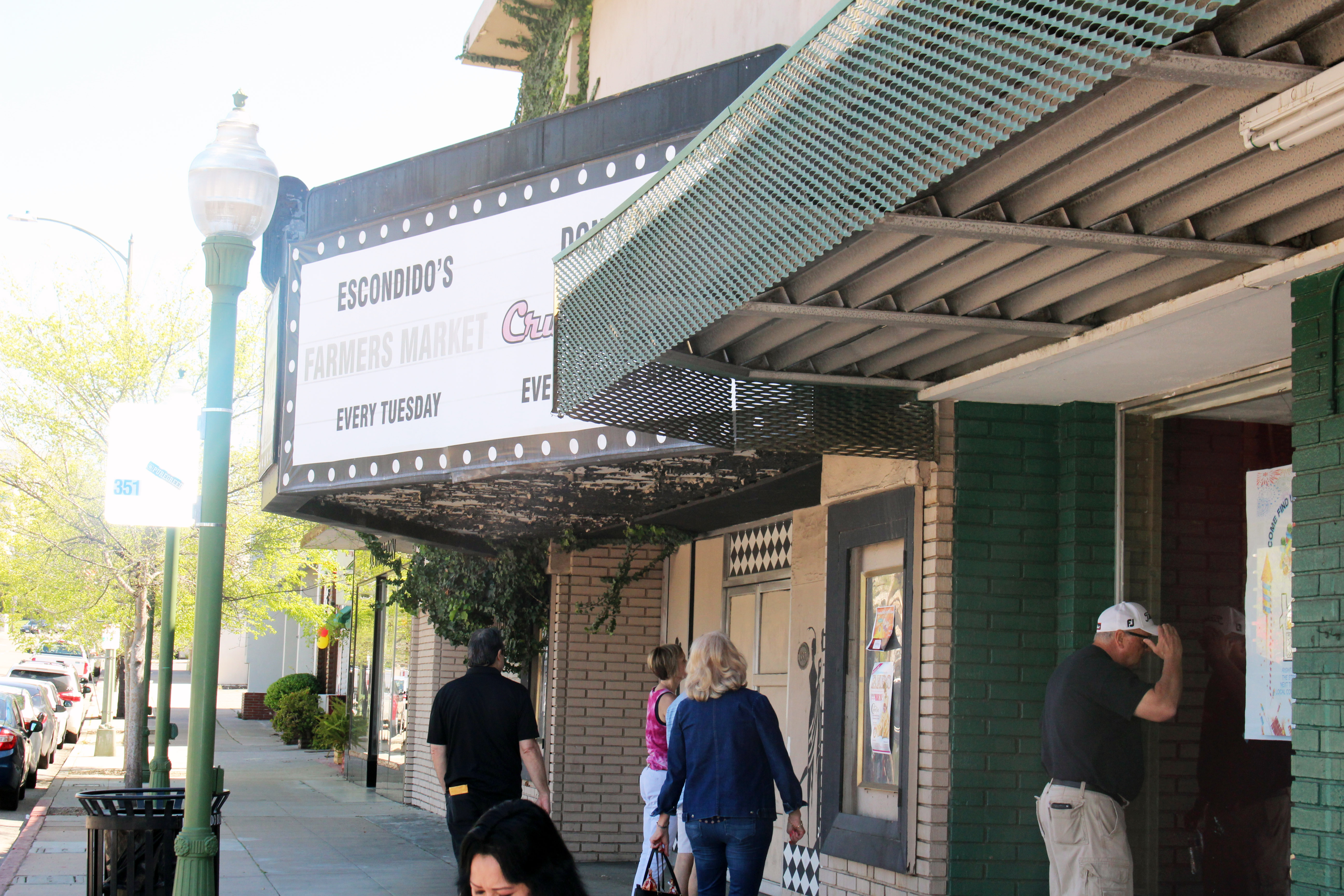 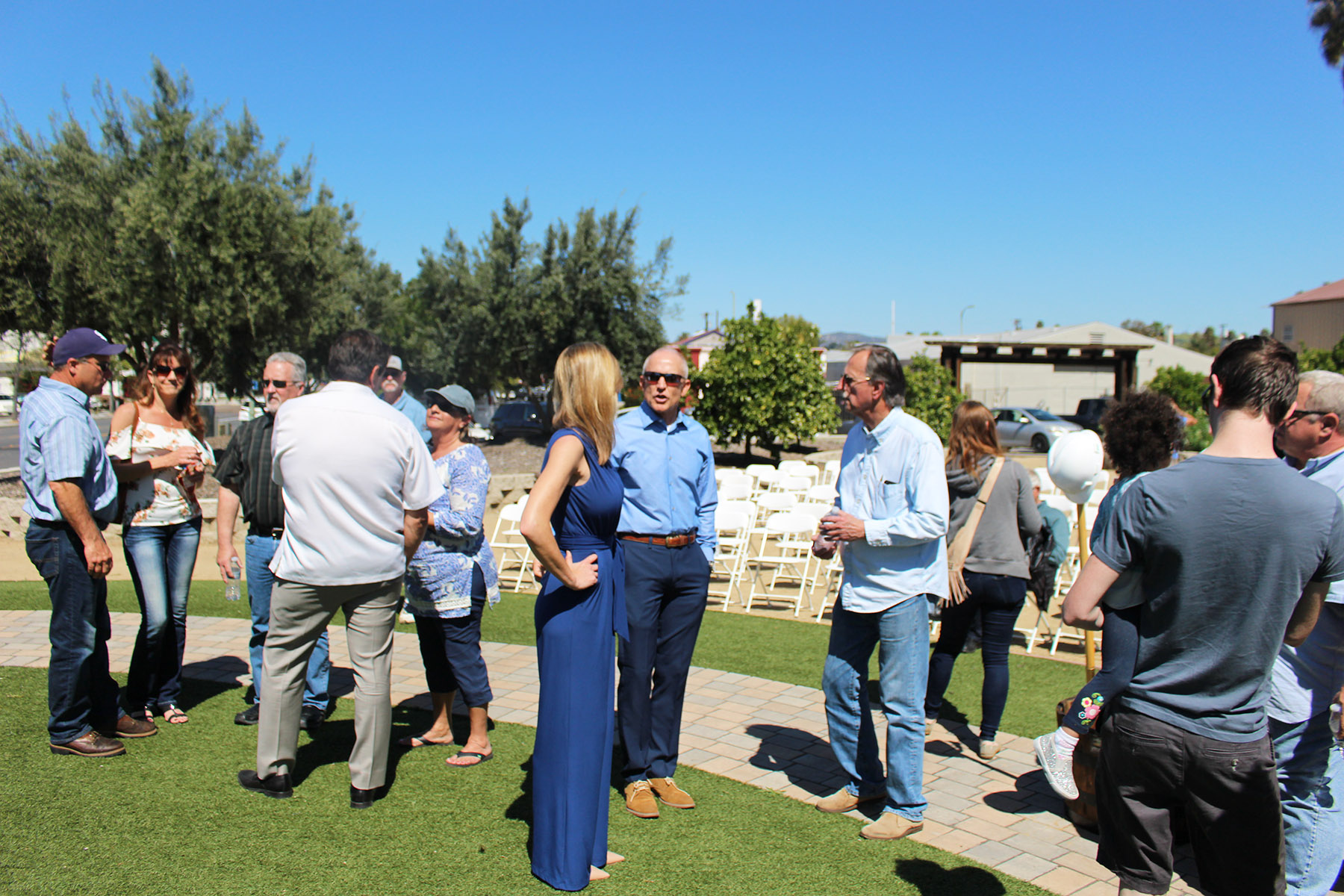 One response to “City, church celebrate groundbreaking of “The Grand””