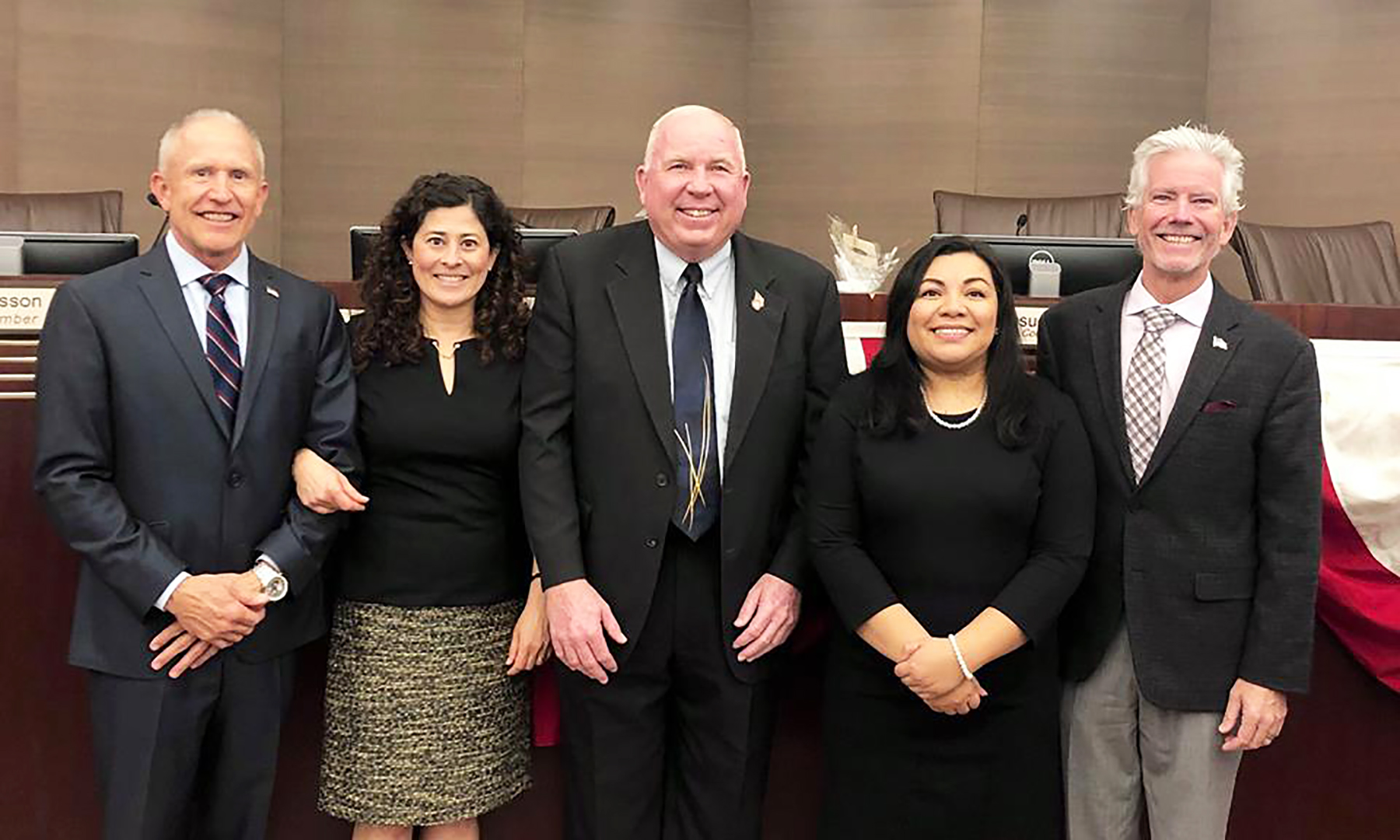 The dignified transference of power from one regime or administration to another is one of the great traditions of American life. Such a transition happened December 12 at Escondido City Hall when the city said goodbye to Mayor Sam Abed and Councilman Ed Gallo and welcomed new Mayor Paul McNamara and Councilwoman Consuelo Martinez at the Installation Ceremony.

With all of the elected officials pledging to “move the city to the next level” the evening was a love fest of congratulation and expectation, with the only exception being a few moments when the outgoing mayor was saying goodbye and some in the audience didn’t want him to leave unscathed.

The evening began with the presentation of the colors by representatives of the Escondido Fire Department and Police Department.

Then the Escondido Chorale, under the direction of Joe Stanford, led the audience in the National Anthem.

City Manager Jeff Epp read the official certification of the election, which was followed by the Pledge of Allegiance.

Outgoing officials made their farewell remarks. You can read Abed’s complete remarks elsewhere in the paper.

Gallo remarked “This is a lot like déjà vu all over again. I have been here before,” referring to two separate terms in office. He thanked his campaign volunteers. “I’m proud of my 26 years of public service to the city.” He noted that the city’s credit rating rose to AA- and praised city policies that fought homelessness and eradicated graffiti. “I’m proud of the money spent on District 1 infrastructure.”  During his time the city went from lowest median income in San Diego County to one of the highest, he said.

He worked with four city managers. “Jeff Epp turned the city around by changing the culture,” he said, adding that city attorney Michael McGuinness “saved the city a ton of money.” He added, “I think the biggest success was the continuity of the council, the same people for six years.”

He praised the new business model of the California Center for the Arts, Escondido, that took it from an institution constantly seeking subsidies to one that stayed within its budget.

Voice nearly breaking, Gallo said he has for 48 years carried in his wallet a card with the Stephen Grellet quote:  “I shall pass through this world but once. Any good, therefore, that I can do or any kindness I can show to any human being, let me do it now. Let me not defer or neglect it, for I shall not pass this way again.”

Mayor Abed spoke of his accomplishments during 14 years as councilman and mayor. He said he is returning to his real estate development company. He declared, “I truly believed that every policy we implemented and every decision I made was in the best interest of the 155,000 citizens who live in this wonderful city.”

He added, “I have no regrets whatsoever. Escondido is a much better city today. I have held true to the promises I made in every election and never wavered on my principles. Getting re-elected has never been my goal. My focus has always been on doing the right thing for our community. A promise made, a promise delivered.”

When Abed called on the city to “commit to a civil discourse” he generated some impolite laughter, causing him to look out over the audience and say, “Mutual respect.”  He concluded by saying that his service “has been the honor of my life.”

Then it was the turn of the new folks on the block. Judge Sim von Kalinowski administered the Oath of Office. Mayor Paul McNamara,  Consuelo Martinez and John Masson were sworn with their friends and family looking on.

McNamara quipped, “Well, you’re looking at the new team! I have to admit I like this new meeting. I think it’s going to be pretty short.”

Reading her speech in Spanish and English Martinez said: “I will work hard not to disappoint you and to move forward as one Escondido.” She was interrupted several times with cheers and applause.  “The journey to public office is one that one does not take alone. It truly takes a village.” She thanked her family for coming to Escondido 63 years ago. “Thank you for sharing what unconditional love is and instilling in me the values of hard work, ethics and social justice.” She said she would never forget her roots.

She thanked her “amazing campaign team,” from both efforts (she first tried for the office in 2014.) “This has been a full circle moment,” she said.  “I’ve been involved in my community for nearly two decades. I’m used to being on the other side of the dais and speaking as an engaged citizen. So, I’m really happy to be here as a strong voice for the community.”

Martinez thanked District One’s voters and neighbors “and some of my neighbors who might not have been able to vote but encouraged their friends and relatives to exercise their right to vote.” She concluded, “We embark on our journey to unite Escondido as one city. I want to ensure that all of my neighbors are heard, no matter what neighborhood you come from or where you were born. I hope to inspire a new generation that will serve our city as leaders in the future and now, no matter where you were born or what street you live on, because I believe you belong here. I look forward to serving my city and providing a strong representation to the district with my colleagues to move our city forward.”

John Masson also thanked his family: “Public service is not an easy thing to do and to drag your family through times, I’m just grateful that they support me. “ He thanked the voters “for having faith in me and what I bring to make Escondido a better place.”

In his inaugural, the new mayor thanked his many volunteers, including campaign manager Nina Deerfield. “At the beginning she and I were the only ones who thought I could win!” He reached out to the man he defeated. “Public service is always difficult and I would like to say thank you—whether you agree with the individuals or not—to both Ed Gallo and Sam Abed for their many years of service to this city.”

He continued, “I’d also like to thank all the residents who supported us and supported this change. We are building the sense of community and that we can work together. Obviously, we have a number of challenges. They are not going to be solved by the people sitting on this dais, but by all of us working together. To having those committees and commissions to where we have a lot of transparency and feedback to move the city to the next level.

He concluded, “I think it’s an exciting time. We have a lot of smart people here in Escondido with a lot of good ideas. We are looking for all of your ideas and all of your participation to make the city better.  I know John and Mike and Olga very well and I look forward to working with them, as well as Consuelo. I really look forward to working with you, no matter what side of the aisle you are on, for this wonderful community we live in.”

After the short meeting, the night was one of celebration. A mariachi band was outside under the rotunda to greet the new council.

Former mayor Jerry Harmon was much in evidence in spirit and in reality, since his backed candidates had recaptured the council majority and he remarked to several present that McNamara was the first Democrat elected mayor since Harmon left office in 1994.