Circus Vargas has accomplished a feat even more difficult than some might have believed possible. They have created an incredible animal- free circus production that still manages to deliver audiences the nostalgic, authentic, traditional circus feel that fans love, albeit without the animal factor. 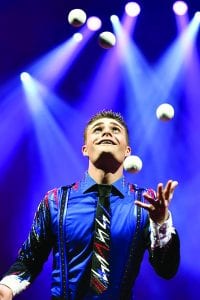 Jugglers are among the many attractions to see at Circus Vargas.

This show is amazingly entertaining for everyone of any age! It’s the perfect mix of aerial artistry, dare-devilry, comedy, magic and acrobatics. So why no animals?

“We receive many inquiries as to why Circus Vargas’s current productions do not include animal acts,” says Rolanda Kaiser, PR director. “The creative concept behind the reincarnation of Circus Vargas has simply been a natural progression in the long and stellar careers of owners Nelson and Katya Quiroga.

“Having performed as acrobats and aerialists with some of the most famous circuses in the world, Nelson has always gravitated toward the acrobatic aspect of circus. Katya, a former ballerina, leans toward the artistic, balletic aspect, the beauty of movement and the human form. For them, Circus Vargas is the culmination of their two passions. The current productions, born of their artistic collaboration, are based on the human aspect of their combined circus experiences and expertise.”

In other words, it’s just not their thing! Circus Vargas’s new owners are former acrobats and are doing what they know best. Although some might not imagine a circus without animals, the circus is really so much more! It’s a feeling, an experience. It’s that giddy excitement that overcomes you the moment you’ve entered the big top in excited anticipation, wondering what spectacular things are awaiting to be seen! Flying trapeze, jugglers, clowns, aerialists, acrobats, the lights, the music…. you know you have most definitely entered a magical circus realm where you prepare to be amazed and astonished! In short, “Circus Vargas is absolutely circus at its best,” says Rolanda, “and it just happens to be animal-free”.