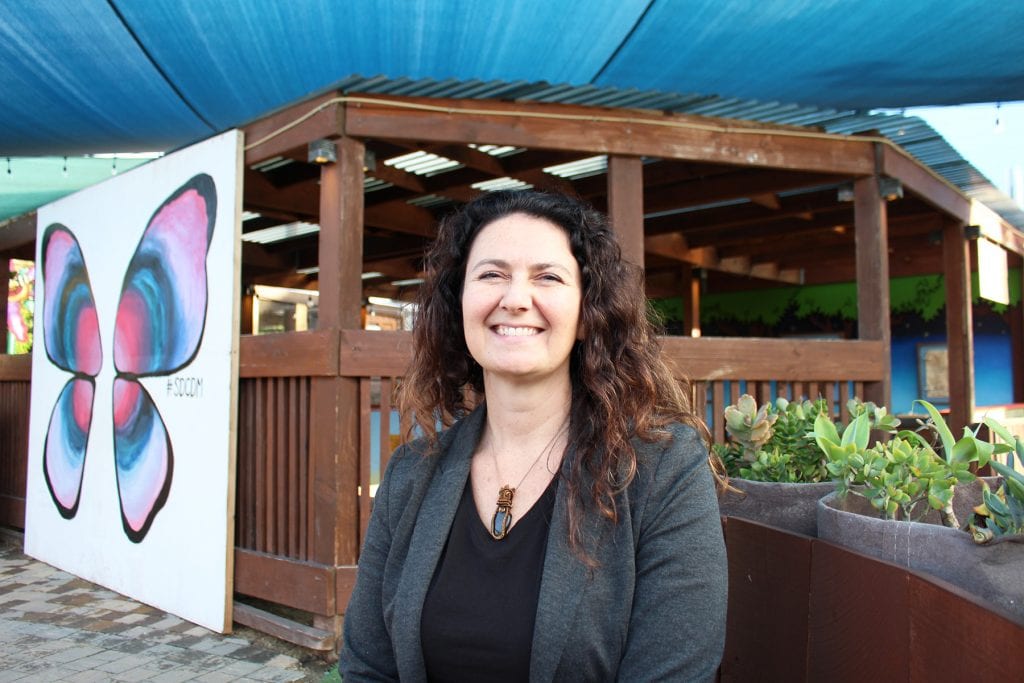 Because the earliest years of discovery are the most important for the developing child there is the San Diego Children’s Discovery Museum. The museum, now entering its 20th year, has grown enormously from its early days on Grand Avenue to its current location on Broadway across the street from Grape Day Park.

Wendy Taylor, who has been at the museum since 2012 as a grant writer in charge of development and last year became the executive director,  sat down  for an interview about her relatively recent appointment: She was hired in May of 2019, after serving as interim director for the previous 11 months.

She has seen the museum grow from about 25,000 visitors a year to 170,000, so that is truly a regional resource, visited by children from all over the county. It was founded in 1999 as a traveling education program, and opened as the Escondido Children’s Museum on Grand Avenue in 2001. It moved from there to the campus of the California Center for the Arts, Escondido for a few years and then arrived at its current location on Broadway in 2011 with a new name that better served its mission.

If you stroll around the museum you will see features such as the “Global Village,” which focuses on different countries. Currently the country being featured is Spain, but for January through February it will be Australia, followed by Argentina.

The mission of the museum is to “Explore, Imagine, and Experiment through Science, Art, and World Cultures.”

One corner of the museum is called “Our Town,” where careers and community are highlighted and changed once a year.  Currently it is focused on “Neighborhood Heroes,” including fire, police and paramedics.

Outside you will find the  Paleontology Base Camp where young minds, who are always into dinosaurs, can dig around and uncover the fossil of a prehistoric duckbill dinosaur. The “fossil” was cast from an actual duckbill fossil.

Young kids also do gardening and look for bugs among the plants. Once a month Jimbo’s comes out to do a workshop about plants and healthy foods.

Almost all of the exhibits at the museum are built on site by staff and volunteers who include interns from Escondido high schools, who earn public service points for their labors. The museum’s Sunflower exhibit, for example, was built by interns from the Del Lago Academy as part of a school project.

“The museum is very popular with high school interns,” said Taylor. “We have a great partnership with Del Lago Academy,” she added. 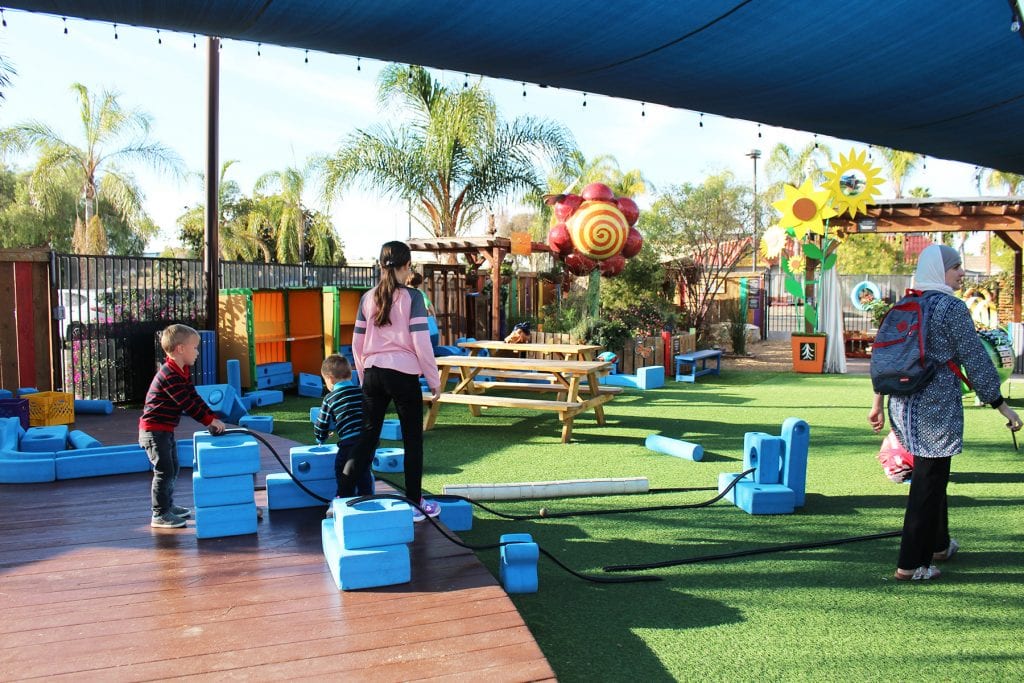 The San Diego Children’s Discovery Museum is a visual feast for children, who learn about things such as science and nature. This is the “water wise” exhibit, where kids learn about water dynamics. They can build dams to see what happens. “This is a favorite exhibit because it’s water and Escondido gets so hot in the summer,” said Museum director Wenday Taylor.

Children can find out about farm animals by visiting the chicken exhibit, where the hens lay eggs and kids can meet them and, of course, pet them.

In the Aquaponics exhibit a closed ecology is demonstrated. The fish feed the plants and the plants in turn feed the fish!

Director Wendy Taylor is in what she considers to be her “dream job.” With a BA in Fine Arts from Pepperdine University, and a degree in Art Education from Texas Tech, she began her career at the Buddy Holly Center museum in Lubbock, Texas.

She landed in California in 2012 at the San Diego Children’s Discovery Museum. “I’ve always had a deep passion for the arts and helping kids to find their ‘spark’ fits in with that,” she said. “We spend time inspiring. Sometimes places like this are the only place where they can get such sparks that help show them who they are.”

Given that a large part of Escondido, and indeed the region itself includes underserved children, the museum doesn’t turn anyone away. “We raise funds to help support all children,” said Taylor.

There are, for example, after school events for children in grades 2-3 and mobile museum visits first graders. Kindergarteners are brought to the museum on field trips. Fifth graders also get visits from the mobile museum, however the real target age group is 0-10, i.e. up to third grade.

The museum is in 18 school districts, serving 85 separate campuses, all over San Diego County. It gets funding from the county and state. “Of course,” says Taylor, “we are always looking for more!”

And, it goes without saying, there is no age limit for families to bring their whole brood for a lot of wholesome family fun in a friendly, safe environment.

“This job combines a lot of my interests,” says Taylor. “It’s very satisfying to see the impact that education has—and that’s always been important to me.” 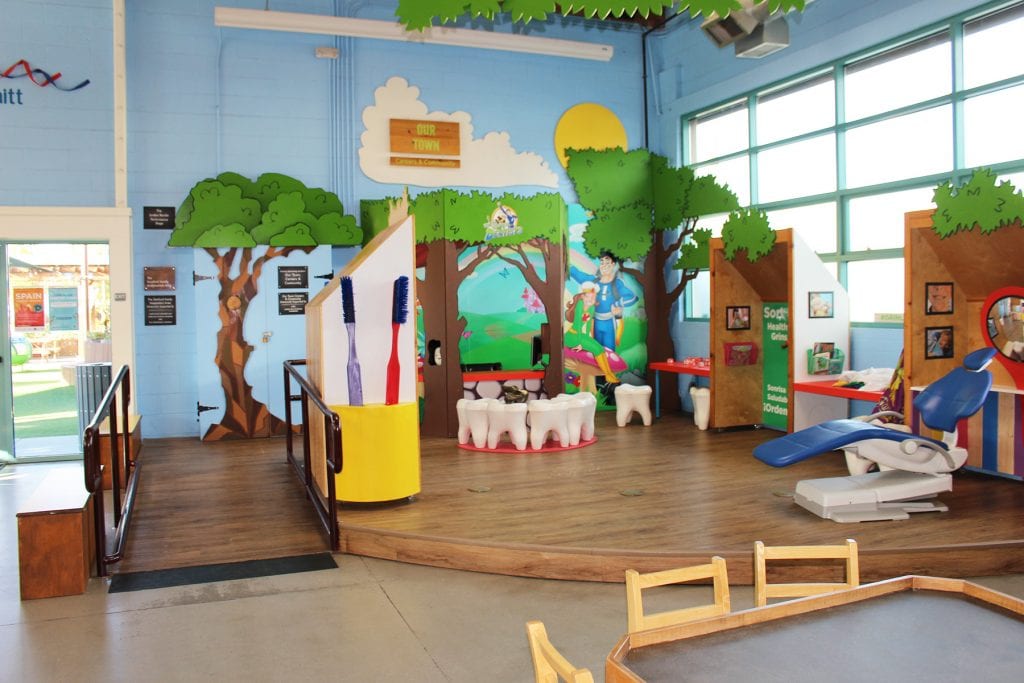 The “Our Town” segment of the museum is currently honoring “Neighborhood Heroes,” and shows one type of career, that of a dentist.

She recalls that when her very young son (2 and a half years old) first experienced a wind tunnel what a sense of wonder it created in him. “I saw the complete wonder. He had never seen anything so fascinating. Not all children can experience things like that.”

She sees moments like that every day at the San Diego Children’s Discovery Museum. “It’s a very challenging dream job, but it IS a dream job.”

As the museum enters its 20th year it will focus a lot on changing its look.  It is doing a mural contest with the Del Lago Academy and some of its more talented young artists. It is also developing its website as an educational tool for children.

The museum’s 20th gala will be held March 28, 2020 with “tastes from around the world” and honoring its two decade journey from modest store front to one of the most recognizable buildings in the city.

“It was founded because there was a need. We will see where the next decade will take us,” says Director Taylor, who looks forward to the trip.