Chief Ed Varso commits to a new kind of policing 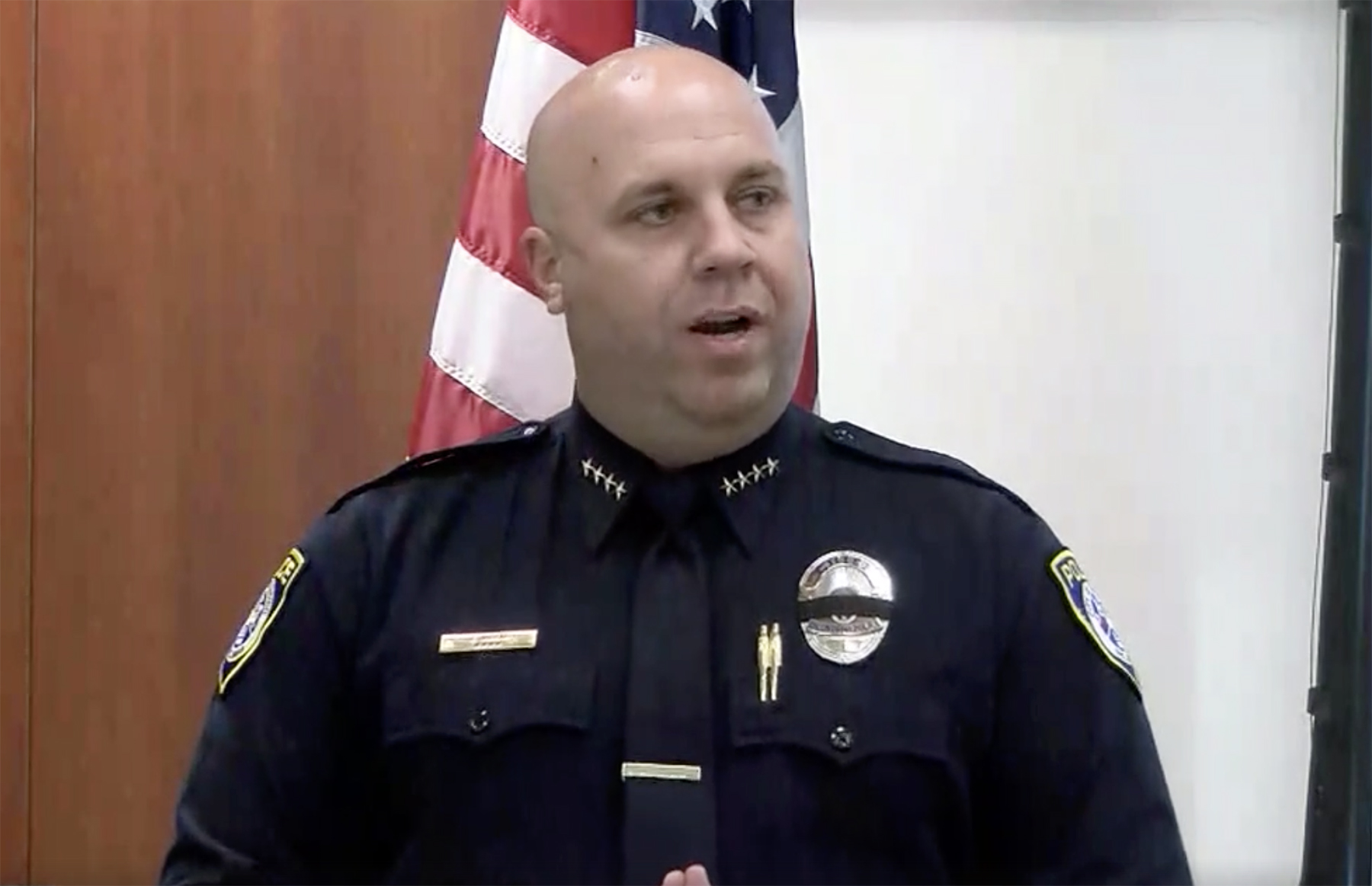 “I attended most of those events and did something I thought was important. I joined the crowd and I took the time to listen.”

Varso highlighted the new policy while remembering the George Floyd protests and rallies last summer that brought it about.

“I attended most of those and did something I thought was important,”  said the chief. “I joined the crowd and I took the time to listen. What become so important to me was that they weren’t coming out to voice their protest against what had happened in Escondido but to voice the expectation that our police be well-trained, be professional and treat all members of our community fairly.”

He added, “This is something I and every member of our department agrees with wholeheartedly. After all, we are here to serve the community.” Behind him was a large photo taken at a protest near the Escondido City Hall. “Members of the protest invited us to stand with them. We linked arms and I made the commitment that the department would be an agency I would hold to an exceptionally high standard,” he said. “This photo means a lot to me.  Despite the incredibly challenging times we were facing, the police and community joined together in solidarity, for the safety and future of Escondido.”

Varso, who took over as police chief a little more than a year ago, said that one of his first actions “was to review the best practices on de-escalation.” He incorporated the philosophy, revisions and county-wide de-escalation training put on by the District Attorney’s Office. “We were able to implement a policy that was comprehensive and takes into account community input.”

This policy, he said, “recognizes the commitment to the reverence for human life and uses strategies most likely to lead to de-escalation,” often without the need for physical force, while still protecting the community.

Near the beginning of the department’s de-escalation policy (which can be found at h) it says, “The goal is to provide deeper insight and enhanced training to promote de-escalation techniques, crisis management and controlling options while keeping our community, officers and persons with whom we are interacting safe by utilizing best practices to minimize the chance of injury to all. This de-escalation and interpersonal communication training includes tactical methods that use time, distance, cover, and concealment, to avoid escalating situations that may lead to violence.”

De-escalation, it says, “is taking action or communicating verbally or non-verbally during an encounter in an attempt to stabilize the situation and reduce the immediacy of the threat so that more time, options, and resources can be called upon to resolve the situation without the use of higher-level control techniques with the overall objective of bringing the situation to a successful resolution.”

Varso declared, “I don’t see this policy as us reaching the goal line. It must be ever-evolving, so the Escondido Police Department remains a great law enforcement agency.”

Miller, a longtime Escondido resident long involved with the cause of social justice, said he had met with Varso since June of 2020. “We wanted to take a contemporary look at de-escalation policy,” he said. “As we acknowledged the loss of life of Mr. Floyd, we set up a team to address this from the grassroots organization.”

Miller praised EPD for working with the community to incorporate its ideas in policy. “Here in Escondido, we have a police department and administration that prides itself in this type of cooperation,” he said. “We look forward to a policy that encourages the most peaceful outcome. This is a model for other cities to follow. This is the key to having a product that affects  and handles those in the most respectful way possible.”

Miller said other cities should reach out to activist groups for input in putting together policies. He called the new de-escalation policy, “the first step of many.” He added, “The only way we can get there is together. It is a living document and we are in here for the long haul.”

Jenkins described how North San Diego County NAACP President Satia Austin “created a joint task force consisting of local community organizations. Our goal was to open up dialogue with law enforcement in North County. We did this by building bridges and not laws. Now is the time to take it from the streets to the board rooms . . . making real change.”

Questioning “how many departments engaged the community” during this time, Jenkins thanked “Varso for being receptive.” He addressed him: “We are real happy to see the language that you included on the duty to intervene and disengagement.” Paying tribute to what they did together, he added, “We have a long time to go.”

He spoke about the NAACP’s “10 demands for all police departments” (see below.)

1 )Create a Citizens Review Board, Police Trial Board, or Accountability Review Board for the public to have permanent presence/seats and have subpoena power.

3) Immediately release the names of all officers, supervisors involved in all shootings.

6) Increase the use of special prosecutors when potential hate crimes are present.

7) Implement implicit bias training for interacting with persons of color to include racial sensitivity, diversity training, and de-escalation strategies.

8) Enhance the collection of data on fatalities involving police officers.

9) Discourage so called “citizen’s arrest” or escalating or confronting acts within the community.

10) Interact and team up with the NAACP and other organizations that promote public safety and good citizenship of the public.

He said, “We will be focusing on these demands” and added, “If you want your voice heard, become a member of the NAACP.” He wished the officer who was shot recently “a speedy recovery.”

Disposti, of the North County LGBTQ Resource Center said he did several workshops with EPD staff to develop a “more accepting and inclusive work environment.” They focused on the difference between sex and gender and “addressed historical discrimination and best practices.”

Varso took questions from the media. A reporter asked about officers “walking away,” when that best defuses a situation.

“We have used that from time to time for a number of years,” said Varso. “There is a minimum standard set by the law and there is a difference between being lawfully allowed to do something—and when that is not the best response.” An example: someone is suicidal, “and they are the only person in the house. At one time we would have escalated. Now we look to keep people safe. Walk away and trade-off for resources at a later time. We’re trying to do something that is a peaceful resolution but doesn’t harm anyone.”

Asked what de-escalation training looks like, Varso said, “It’s two part. The District Attorney put on a formal course every member of our department attended. It speaks to topics of de-escalation and how to do it. From there it is on us to continue with our ongoing training.”

They have introduced both informal and formal debriefings after incidents.

“It could be something that isn’t a newsworthy event, where we can master skills by talking about it. Spending time after a call debriefing,” he said.

For major incidents, “we will go into those events in a much deeper fashion that can come out in training later on,” said Varso.

Someone said the police academy should have courses on this, including understand Hispanic and other cultures. “You clash against something you don’t understand,” said the reporter.

There are two different pieces to that, said Varso. “De-escalation training to keep from a violent encounter. Second is bias training and cultural understanding. We are trying to meet people where they are. We are coming into a situation where emotions are high and it is difficult to reach people. We spend a lot of time recognizing where someone is at in life at that moment.”

This teaches officers to be well-trained and not take things personally. “We may be getting yelled and screamed it, it’s nothing personal,” he said. “We don’t conduct ourselves in a way that makes it personal—and we try to understand everyone’s perspective.”

He added, “Law enforcement and our officers are always interested in finding the next safe way.” If you look at a photo of officers from twenty years ago, the officers are armed with guns. “Now we have tasers and pepper spray,” he said. “It’s really important to be forward thinking and cutting edge. It’s important for us to understand the community’s perspective.” When he took over, he said, “I reminded myself: it’s Escondido’s police department. It’s not my department.”

He said Escondido is very fortunate to have a very supportive community. “This was exemplified that where other cities were having violence, we were having these conversations.”

Yussef returned to the rostrum:  “My most encouraging part [of the new policy] is the pre-engagement where the officer gets to decompress if coming from a hard call and treat it as a separate incident. To slow down and treat each incident separately.”

This is important, he said, because sometimes residents feel officers are present when they don’t need to be. Sometimes an officer simply needs to say, “There is nothing going on here,” he said.

Disposti added that there will never be understanding without trust. “As simple as it appears, for my community, this is not New York. Forty percent of homeless between 14-24 happen to be LGBTQ. There is a lot of problems over there.” A possible approach is to send a service provider instead of a police officer when officers aren’t needed. “Translating into the opportunity to think outside of the box and follow models that have been used successfully around the country,” he said.

Jenkins said now they will focus on other departments. “Those doors weren’t as open Chief Varso’s door. You have to have the foresight to be community-oriented. After the murder of Floyd, thousands of people in Escondido protested. Now is the time to sit down at the table. Varso and his department have given us the opportunity to sit down with them.”

He gave an example. Two weeks ago Jenkins’ wife was in a car accident. “While I was talking to an officer I asked how the sergeant was who had been shot. He was shocked that I even asked the question and thanked me for asking. That’s the reaction from a lot of people of color. Intimidation between police and people of color. We want to dispel that myth and invite people to come together and have meetings.”

“I think that is a mutual desire,” said Varso.

Yussef describe how, in June during the protests, “I came to the rally and when I got there the chief was mingling and meeting people. He started speaking to the people. That relationship was formed. He gave me his card.” At that moment, a connection was made. 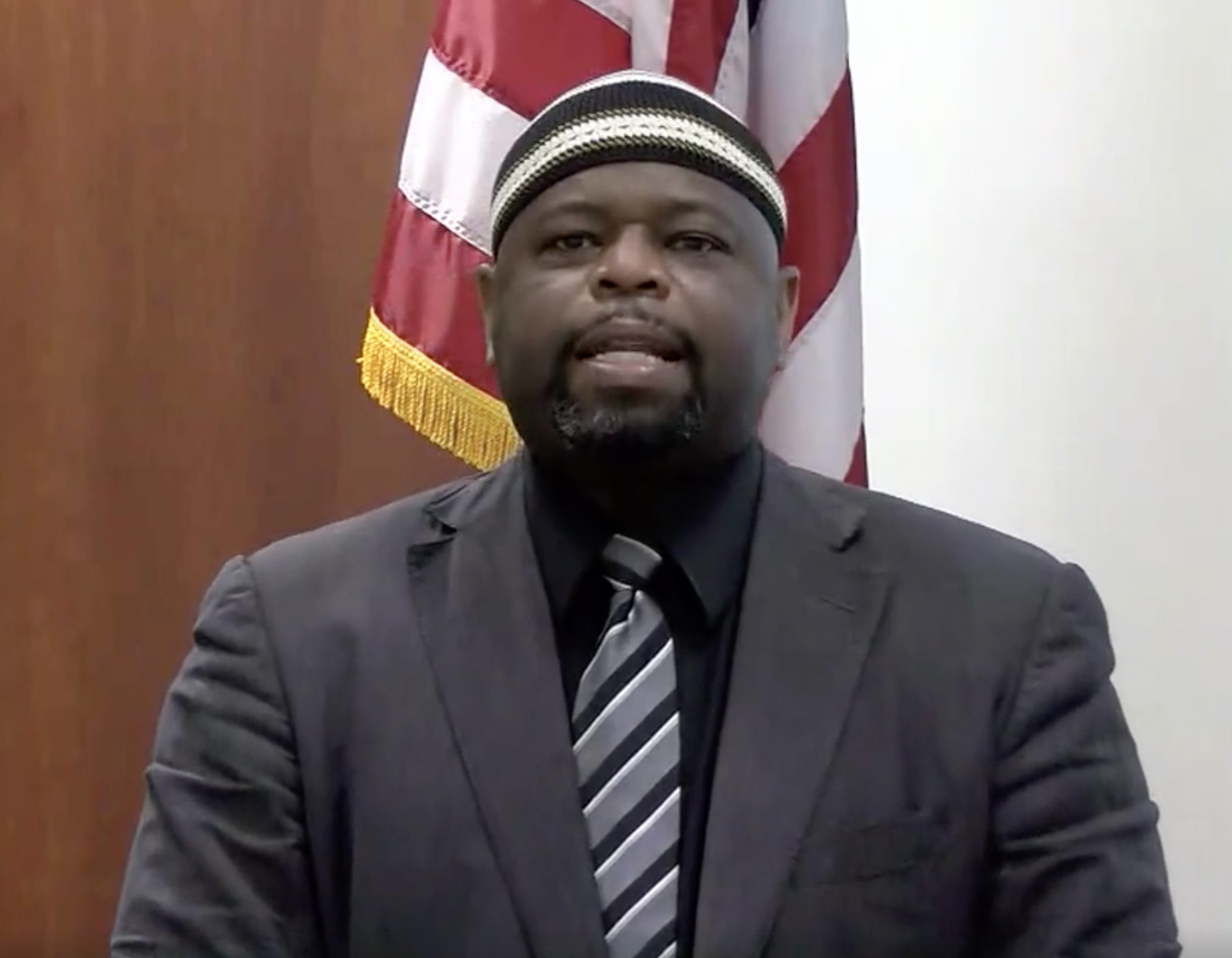 Yes, the fishing is great, but Lake Wohlford’s real value is key part of local water systemA drop of solution in an ocean of problemsBrown Act lawsuit dropped against Palomar Health