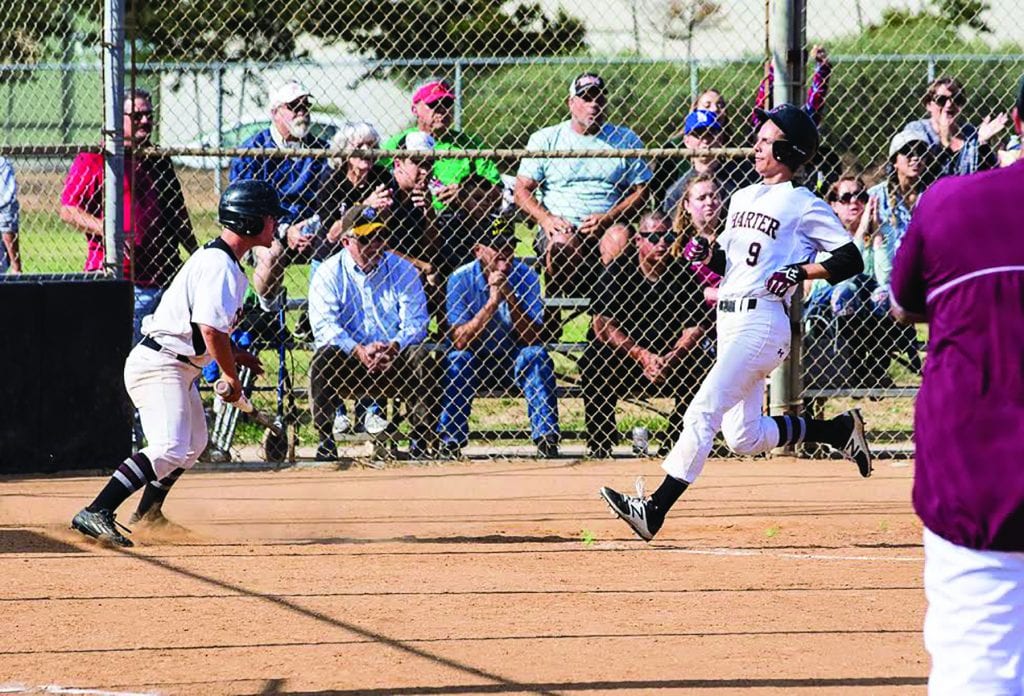 Mathew Burcin scores another White Tiger run as teammate Tristan MacMahon urges him on during EC’s 7-3 win over the Bruins.

Having just completed his third year as the Escondido Charter baseball coach, Kevin Reinking has quickly established a culture within the program whereby expectations are lofty and the goals are clearly defined. “Our mindset is on developing a winning attitude, having successful seasons, making the CIF playoffs and then going for a championship.”

As far as his 2017 ballclub was concerned, it checked off everyone one of the items on Reinking’s things-to-do list. The White Tigers (18-14-1) can take real pride not only in the way that they competed and for their adherence to the agenda set forth by their coach, but also how close they came to capturing a title. Because if it weren’t for its nemesis Maranatha Christian, EC most likely would have taken home the whole ball of wax. “I’m really proud of them,” said Reinking when asked to appraise his latest team. “They really stepped it up.”

No more so than in the postseason when the stakes were at a premium and the significance of each succeeding game was magnified. Thanks to a solid regular season that earned for them a No. 2 seed in the Division V San Diego Section CIF Baseball Championships, the White Tigers were to prove that they were more than deserving of their high playoff placement. 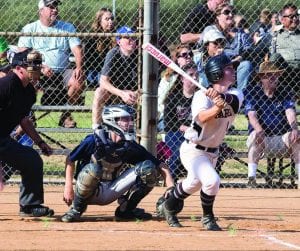 The talented Tristan MacMahon had a big game against High Tech, delivering two hits, scoring once as well as driving home a run.

In first round action they blanked Julian 6-0 before edging High Tech Chula Vista 6-5 in their subsequent game. But then four days later, the Bruins returned the favor with a dramatic nine-inning 6-4 victory that forced a third and deciding meeting between these two suddenly intense rivals.

However, despite the setback to High Tech, skipper Reinking was feeling good about his team’s chances to use this penultimate do-or-die game as a springboard to the finals. “In a way, it was almost an ideal set-up in that we’d had some success in the playoffs but also we’d experienced some adversity as well,” explained Reinking. “That loss brought us back to earth a little bit. It made us realize that we weren’t perfect and still had things we needed to work on. It helped us to regain our focus and puts us in a proper frame of mind.”

Fittingly, in the decider versus HT, Charter was able to set the tone in the bottom half of the first inning when stroker extraordinaire Tony Leishman put a massive charge into a delivery from Bruin right-hander Austin Hernandez. Powerfully struck, the ball seemed to be caught in a jet stream as it carried and carried to deep left-center field until it finally flew over the fence.  Leishman’s blast sent an early message that Charter was fully engaged and ready to rumble. “That homer really inflated us,” informed Reinking. “It got us going and we were able to build off of that.” 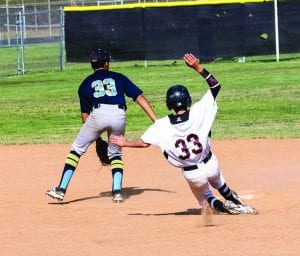 Freshman Chase MacMahon slides into second base with a hustling double against HT.

knot the score. An error and a ground out preceded an RBI smash to left field by senior Isaac Green that evened the count at 1 apiece. It was at this juncture that Reinking went to the mound and elected to replace freshman starter Devin Stinnett with the experienced Matthew Coe. The change might have   been made primarily because Stinnett seemed to be experiencing some arm discomfort but there was also no denying that he hadn’t been at his best. The young righty had been touched up for a pair of hard hits in the first that would have resulted in a run scored had not shortstop Jaelyn Williams made a tremendous cutoff throw that nailed Bruin Alex Gavrilovich at the plate.

With Stinnett having yielded another hit and a run and with the soundness of his arm now in question, Reinking didn’t hesitate in turning to Coe and the determined senior validated his coach’s decision by immediately slamming the door on High Tech with a big strikeout and a routine comebacker.

The White Tigers took little time in regaining the lead when they parlayed a Williams double pulled just inside the bag at third and Chase MacMahon’s lined RBI single into a 2-1 advantage after two frames.

And then Charter basically put things away with a three spot in the third, admittedly with a big assist from their opponents. Thomas Rickard kicked things off with a sharply hit double down the line. Next came the diminutive dynamo Tristan MacMahon who executed a textbook bunt single and so with two on and no one out, the Tigers were once again in business. After Mathew Burcin was plunked to load the bases, Leishman added to his RBI total by serving a sac fly into right center. Then came the sequence that for all intents and purposes removed all doubt about the eventual outcome. 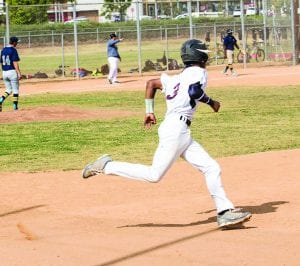 Charter’s Jaelyn Williams heads towards second after pulling a shot down the line versus High Tech Chula Vista. Photos by Lenny Kerbs

center field but it was nonetheless playable. Camped underneath it and clearly positioned to haul it in, Bruin outfielder Clayton Huber inexplicably had it go off the tip of his glove for a costly and devastating error that allowed two more runs to come home. Now up by a 5-1 count, Charter was clearly in the driver’s seat.

But not wanting to let up or take anything for granted, the Tigers kept the pedal down by then scoring for a fourth consecutive inning. A hustling double by C. MacMahon, another untimely error by the Bruins and a deep curving single off the bat of MacMahon’s older sibling Tristan were instrumental in producing an additional pair of runs.  At this stage and down by a sizeable deficit of 7-1, High Tech was all but cooked.

The visitors to the ball field at Del Dios Middle School did manage to scratch out a pair of runs in the top of the fifth thanks to an uncharacteristic bout of wildness from Coe (three unintentional walks) and an infield error.

But the tough righty quickly reclaimed his control after that and with a fastball that had plenty of hop as well as off-speed pitches that possessed bite, Coe would go on to finish things off  with a flurry, striking out the side in both the sixth and seventh frames.

So by virtue of their clutch 7-3 triumph over High Tech, the White Tigers had deservedly earned their way into the final where a familiar and vaunted opponent awaited them, Maranatha Christian.

Not only had the Eagles entered the playoffs as the top seed but in addition, they were also bolstered by the fact that they had already beaten their Pacific League rival Charter three times during the season. However, two of those games had been closely contested and the White Tigers were hardly intimidated by the prospect of going up against this touted foe once more. In truth, they probably relished the chance to even the score on the year’s biggest stage, a championship game to be waged at UCSD’s picturesque Triton ballpark.

And early on, things were trending positively for Charter when infielder Burcin tripled and eventually came home to score to stake the Tigers to a quick 1-0 margin. Unfortunately, the Eagles immediately countered in their half of the inning by reaching EC left-hander Thomas Brunette for three runs.

Maranatha then went on to expand its lead by tallying single runs in the third, fourth and fifth frames that substantially consolidated its advantage. Meanwhile, Eagle starter Bryon Smith was effectively keeping the Tigers in check, allowing only a single run on a meager two hits while fanning six. Make no mistake, Smith had risen to the occasion with a commanding performance.

To its credit, Charter refused to go away quietly and brought things within striking distance when it scored a pair of runs off reliever Zachary Bridges in the sixth that narrowed the margin to 6-3. But the Tigers couldn’t muster any more offense from there and as a result, their admirable pursuit of a title had finally run its course, just shy of the finishing line.

The hitting star for the victorious Eagles (25-7-1) was clearly junior standout Mark Hewitt who achieved the rarity of whacking two triples in the same game while racking up three RBIs as well as scoring once.

For the game but vanquished Tigers, the younger MacMahon continued to make a huge impression in the postseason with a two RBI effort. The accomplished Leishman also had a productive afternoon with two more hits, a ribbie and a run scored. Coe and Burcin each tallied once and registered a hit while the former and T. MacMahon were able to earn their way aboard with a pair of walks apiece. But alas, it wasn’t nearly enough.

And so with the conclusion of the season, the careers of four valued and highly impactful seniors also came to an end. In Williams, the Tigers had a gifted athlete whose versatility as either a shortstop or catcher can’t be downplayed.

As for Coe, he was an absolute horse whether operating behind the plate or toeing the rubber. A genuine team leader who served as a captain, the even-keel Coe exerted a positive influence over his teammates and his ability to handle pressure-packed situations was remarkable. In essence an extension of the coaching staff on the field, his presence always loomed large. Buoyed by an advanced approach at the plate, this multi-faceted performer hammered the ball at a robust .495 clip while also being the club pacesetter in RBIs with 40.  Moreover, armed with a pitching arsenal that could both blow away as well as fool hitters, Coe was a formidable hurler to say the least. Most assuredly he was a special player since his like doesn’t come down the pike all that often.

Another big-time senior was Leishman, who was not only a hitter deluxe but in the opinion of his coach, the slick first baseman was the finest fielding infielder Reinking has ever seen at the prep level. Another influential captain who could pump up his mates and get intense, Tony was the epitome of a team-first guy who made getting quality at-bats his highest priority. A tremendously consistent and dangerous batsman, three numbers tell you all you need to know about Leishman’s proficiency with the stick – a stunning .515 average, a massive 53 hits and a hefty total 18 doubles. At the plate and with the glove, Tony had very few peers.

And finally, there was the hurler Brunette, a 6-foot-4 specimen who could hit spots and never seemed to throw any pitch at the same speed which allowed him to often keep opposing hitters off-balance. Brunette led the team in starts (13) while sporting a nice 2.41 ERA. And though his overall record wasn’t exactly overwhelming at 5-5, Reinking is quick to point out that given a set of more fortuitous circumstances, the dependable southpaw could have mustered, at the minimum, a few more wins.

So a highly successful Charter campaign is now in the record books. One of the very few things it lacked was a championship but playing in the title game was an accomplishment that shouldn’t be undersold. Just getting there is one heck of an achievement.

The departing seniors will undoubtedly leave a void that won’t be easily filled but Reinking is confident that a winning culture has taken root and that more title runs could be in the offing. Come next season, as was the case in 2017, look for Charter to be a contender worth keeping an eye on.