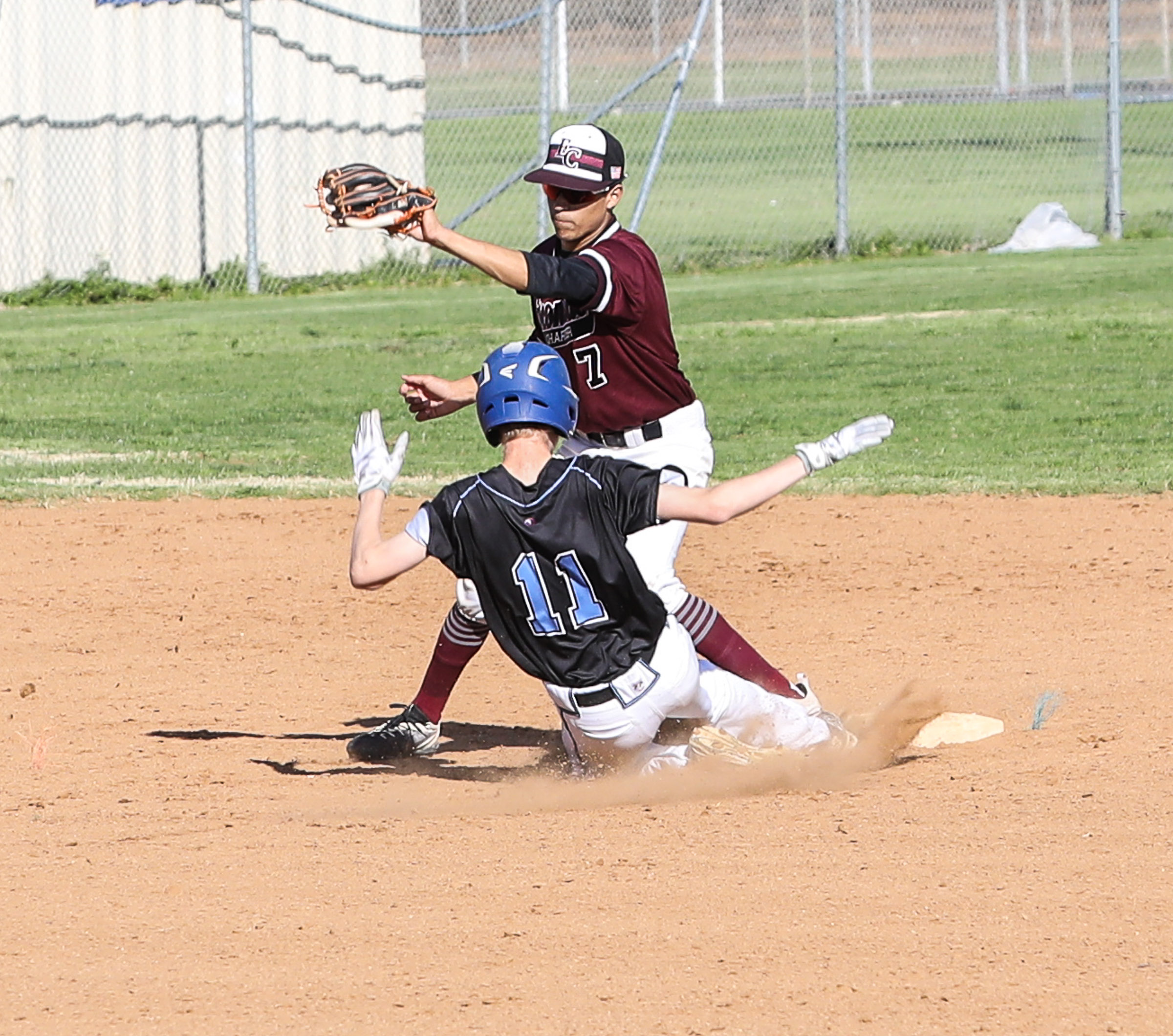 Calvin’s Gannon Lovisa slides into second base ahead of a throw to shortstop Julian Nunez. 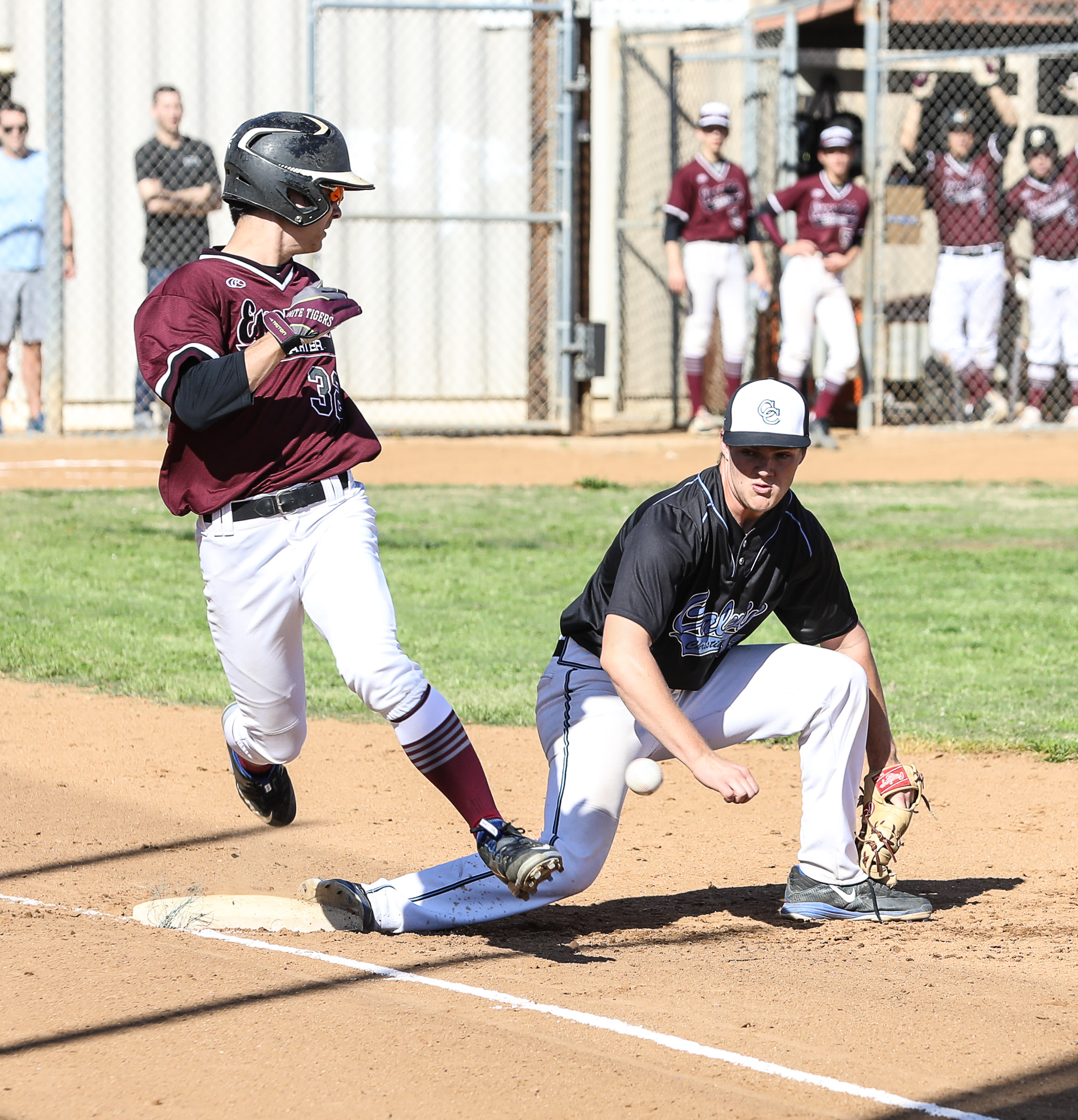 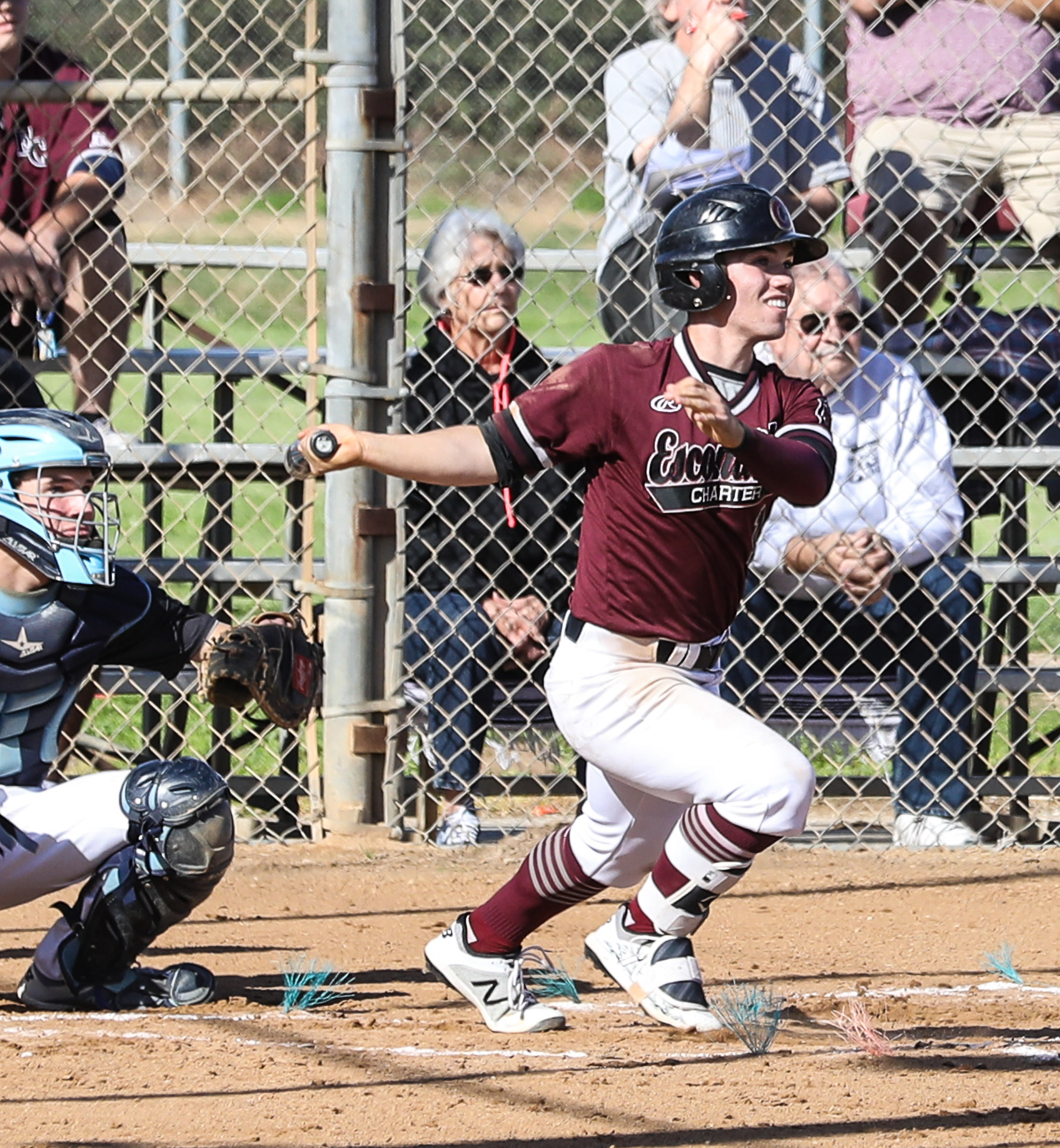 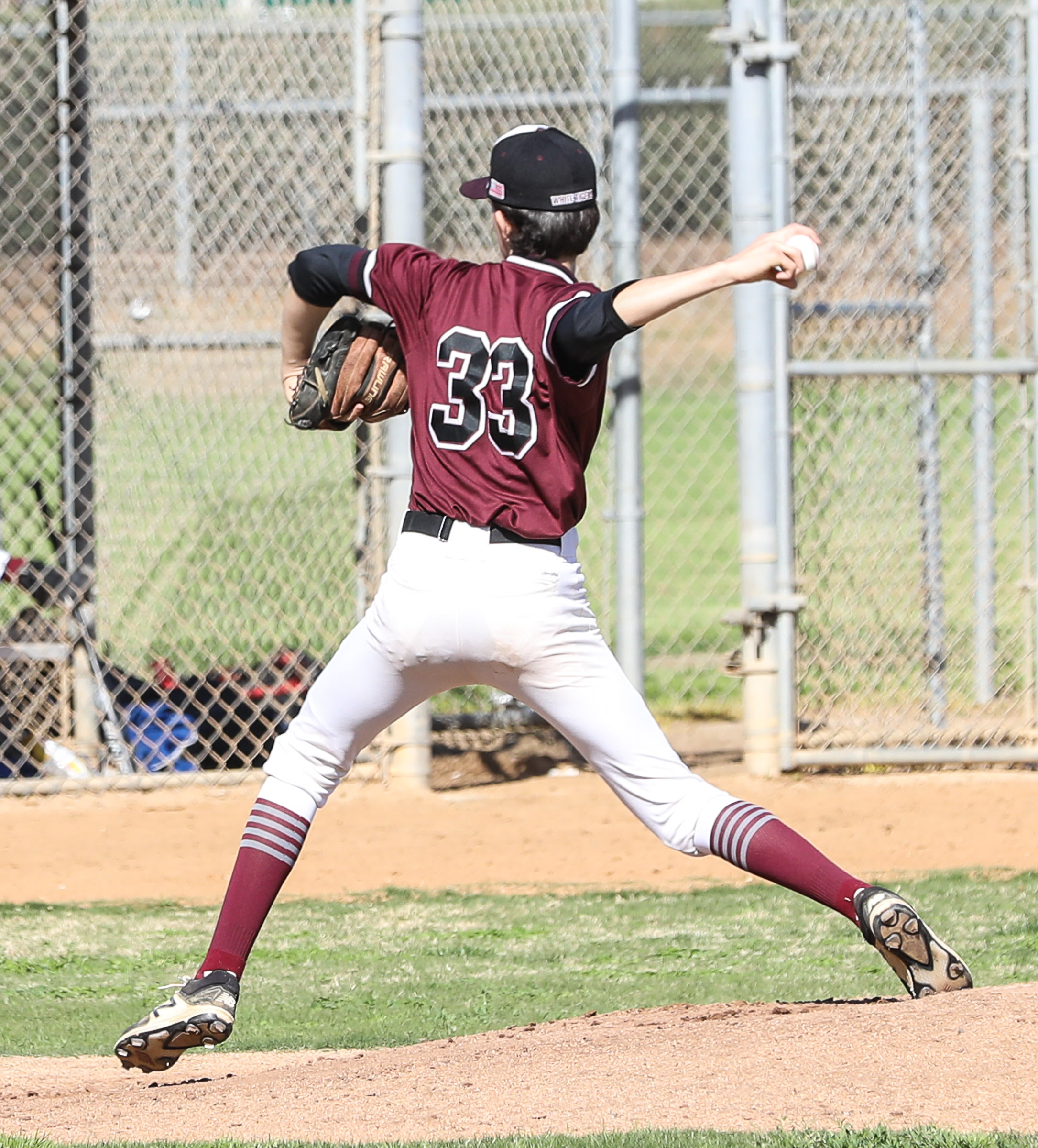 Generally, if you miss the first inning of most any baseball game, you probably haven’t missed out on all that much – at least not to the point where the game’s outcome has been resoundingly decided.

But that certainly wasn’t the case last Friday afternoon as the Calvin Christian Crusaders took on host Escondido Charter. Rather stunningly, the White Tigers required just one frame to erupt for 10 runs, pound out six hits, produce a pair of sacrifice flies and just for good measure, steal five bases. Thanks to this remarkable offensive blitzkrieg, the game was put into the refrigerator lickety-split as EC eventually rolled to a lopsided 16-3 triumph.

With the win, Charter notched its second victory against four losses on the still young season while Calvin saw its record drop below .500 at 3-4.

Though the way the White Tigers swung the sticks and scored aplenty was the overriding theme of the day, the strong pitching performance of right-hander Chase MacMahon also played a significant role. After yielding a run in the top of the first, the lanky MacMahon stiffened considerably as he went on to shut out the Crusaders over the next five frames, allowing just a paltry three hits.

But it was clearly what EC did at the plate that told the story and stole the show. Everyone in EC’s starting lineup had at least one hit and tallied a run while seven players delivered RBIs. Among the prominent offensive heroes were Julian Nunez who drove in two runs with a pair of singles, infielder JR Lucas who scored four times, Devin Stinnett and C. MacMahon each of whom rapped out a pair of hits and the trio of Tristan MacMahon, Theo Cogmon and Sean Burcin who combined for seven runs scored and three RBIs.

Certainly the Crusaders had no inkling of the avalanche that was about to overwhelm them when they took an early 1-0 edge in their initial at-bat. With one out, senior catcher Zeke Shockley, who was to wield a potent bat all afternoon, ripped a MacMahon offering that carried well over the leftfielder’s head and went for a double. And when freshman Will Shinkle muscled a shot between third and short, Calvin was on the board with what proved to be its one and only lead of the contest.

But minutes later came Charter’s massive explosion that saw its first nine hitters reach safely, an eventual number of 14 come to the plate and a staggering 10 runs pushed across. In what seemed like a flash, the Crusaders had been rocked and buried – with the issue no longer in doubt after only six outs having been recorded.

Who could have possibly anticipated the onslaught destined to be unleashed when leadoff hitter T. MacMahon got things going with a flared single to right field off of hurler Diego Figueroa? In short order, the frosh righty was about to discover the challenge of pitching at the varsity level.

Following an error, the procession really kicked into gear. Nunez sliced a liner into right for a ribbie. Stinnett then followed with a single into center. Next up was Josh Kim and his seeing-eye grounder found a hole for a run producing base hit. Now presented with a chance to aid his own cause, the pitcher MacMahon made the most of the opportunity by serving a shot up the middle that produced yet another run.

By this time it was readily apparent that the White Tigers were locked in and getting a terrific read on Figueroa’s pitches. First baseman Cogman was more than happy to join the parade when his pulled grounder into left plated a pair of teammates. And when Sean Burcin’s walk juiced the bases, it meant that the Charter had turned over its lineup with nary an out. But more damage was yet to come.

After stepping into the batter’s box for the second time in the inning, the diminutive but highly skilled batsman T. MacMahon mashed a Figueroa pitch towards deep right-center field. For a moment it appeared as if the drive would split the gap but young outfielder Gannon Lovisa made a splendid stretching grab that turned what might have been a bases-clearing hit into one very loud out. Nonetheless, MacMahon’s blast resulted in a sacrifice fly that chased home Charter’s eighth run. But at the very least, Calvin had finally recorded its first out.

However, the White Tigers weren’t quite finished. After Lucas was hit by a pitch, Nunez coaxed an RBI walk that signaled a pitching change. And though CC right-hander Bryce Lovisa managed to come on and restore order, he did yield a Stinnett sac fly before fanning Kim that mercifully brought the epic inning to an end. Needless to say, this game was basically over before it seemingly ever began.

Charter tacked on six more window dressing runs in the third, fourth and sixth innings that gave it a 16-1 margin heading into the seventh and final frame. But despite the discrepancy in the score, there was still some drama yet to be played out.

By this time, T. MacMahon had taken over on the mound for his younger brother and looked impressive while sandwiching a pair of strikeouts around a walk. Equipped with a smooth and compact delivery, pop on his fastball and good movement on his off-speed pitches, this MacMahon looks to be the real deal on the mound.

But before MacMahon could wrap things up, he had one tough customer standing in his way in the person of Shockley. The athletic and strong-armed Shockley had already smoked a pair of  ringing doubles and this matchup between the hard-throwing MacMahon and the sweet-swinging receiver held real fascination.

And after going deep in the count, Shockley turned on a MacMahon heater and absolutely bombed it into straightaway centerfield before the rising ball finally crashed off a screen behind the outfield fence. Regardless of the score, it was a memorable moment and the two-run homer   gave the Crusaders something positive to take away from an otherwise one-sided affair. The game finally came to an end two batters later when MacMahon punched out another Crusader thereby striking out the side.

Moving forward, it’s hard to imagine either team experiencing anything close to what happened during Friday’s first inning. In so many ways, it was a massive outburst that’s rarely seen.