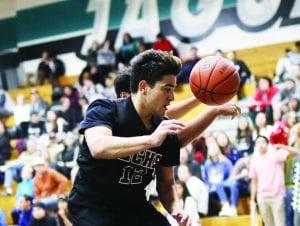 Forward Timothy Perez is focused on getting hold of a loose ball that seems to be staring him right in the face. Perez was a big reason why EC emerged victorious on Friday night, tallying a notable 21 points.

Often it’s said that three can be a crowd as well as a negative. But not when it came to Escondido Charter basketball last Friday night.
In fact, that proved to be just the right number/formula as guards Anthony Cisinsky, Josiah Champagne and forward Timothy Perez pooled their efforts for 59 combined points, scored EC’s final 11 points of the game and generally had their fingerprints all over the White Tigers’ 61-56 victory over host Valley Center High.
With the win, a triumph that Charter coach David Vidosic called one of the more significant in school history, the White Tigers ran their winning streak to five, upped their overall mark to 6-2 and remained unbeaten in true road games (3-0).
For the Jaguars, who have been a genuine surprise given the inordinate number of injuries and fluctuating personnel issues they’ve been forced to deal with, their seasonal mark still remained quite impressive at 10-3 despite the loss. Junior guard Kamin Davis topped the stat sheet for the Jags with 18 points while sophomore standout Nicanor Alvarado maintained his remarkably steady play with a solid 17-point outing.
Though this in no way detracts from EC’s well-deserved victory, it would paint an incomplete picture without mentioning the fact that the Jags were basically without the services of star forward Kobe Dominguez. Nursing a bruised hip and not totally up to snuff healthwise, Dominguez played just a brief minute or two before VC coach Jon Jones elected to shut him down for the night. Dominguez, who is an assertive offensive force and could probably rack up a double-double while sleepwalking, was unquestionably missed and to suggest that his absence didn’t factor into how things played out would be to ignore the obvious. 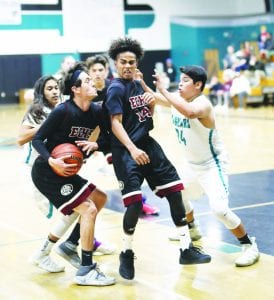 Charter guard Josiah Champagne (with the ball) inadvertently collides with teammate Aristotle Douglas as VC defenders Nicanor Alvarado (left) and Kenny Garcia close in during EC’s 61-56 win over the Jags.

The ultimate outcome of this taut affair between nearby neighbors came down to a compelling fourth quarter that featured four lead changes and three ties. When VC forward Rikki Mazzetti, the Jags’ standout quarterback and a recent addition to the team, confidently knocked down a jumper from the free-throw line with 5:27 remaining, it gave the Jags their first lead (47-45) since early in the second quarter.
Mazzetti’s hoop also triggered a riveting back-and-forth dynamic to the game. Charter’s Perez, a real presence underneath, quickly evened things when he calmly dropped in two free throws after being fouled on a shot attempt.
But the 6-3 Mazzetti was feeling it and he answered with yet another pure swish from inside the circle. Now it was Champagne’s turn to show his stuff and did he ever with a deft flip shot that gently kissed off the glass and tied things once more at 49 apiece.
However, Mazzetti remained undeterred and his power move to the hoop put the Jags back on top at 51-49 but alas for the hosts, this would prove to be their last advantage. A free throw from Wesley Seo got the White Tigers close and then the hardworking Perez tacked on two more EC points from the charity stripe that put the visitors over the top for good.
Following a turnover, Champagne delivered another clutch penetration basket that expanded the EC margin to 54-51. Jaguar guard Keith Vasquez drew his team to within one with an aggressive drive to the hoop but then came the crusher/clincher. Squaring up beautifully and in perfect rhythm, Charter’s Cisinsky let fly with a downtown bomb that was in the second it left his hand. This was to be the dagger to the hearts of the gritty Jags.
A Champagne free throw, an uncontested lay­up by Perez and a Cisinsky charity toss helped keep VC at bay and ran the final count to 61-56. “We’re going to enjoy the moment because this was a big win against a very good team,” said EC coach Vidosic in the game’s immediate aftermath. “There’s still a lot of season left, but I like how we’ve playing and we’ve got a good chemistry working. If we can continue to shoot it well, play fast and do so with confidence, then we have the ability to play just about anybody.”
The set-up for the fourth-quarter dramatics was indeed compelling in its own regard. The White Tigers were able to forge a 32-25 halftime lead mainly on the strength of some deadly outside strafing from Cisinsky that made him like the Red Baron incarnate. The senior sharpshooter drilled two treys from the left side, two bombs from the right forecourt and then a step-back howitzer just for good measure. His 15 first-half points had the Jags scrambling to stay within hailing distance.
But a productive third period for VC that saw it outscore Charter 16-9 got the Jags in position to make their push late. Alvarado was clearly the igniter of this telling run, scoring the first 11 Jag points of the stanza – by virtue of a layup, a left-corner three, a swish from out deep and a high-arching rainbow that found nothing but net.
Vidosic was also quick to single out the efforts of Cisinsky, the game’s leading scorer with 22 points (seven 3-pointers) and Perez (21 points), who not only got his share of points but was a bona fide force on both the boards and at the defensive end. “ Anthony (Cisinsky) is such a threat when he heats up and Tim is capable of putting up a double-double every time he steps onto the floor.”
And let us not forget about Champagne, the third side of this talented EC triangle who was a major contributor with 16 points of his own.
VC coach Jones was duly impressed and very complimentary of the White Tigers when asked about their performance. “I think they’re a smart team that’s well-coached. They came out with a good plan and executed it well. They did a nice job of moving the ball to the right spots on the court.”
As it relates to the Jags, it was definitely a disappointment not being able to capture a very winnable game but taking the big-picture view, ten wins out of 13 contests has been a solid beginning to the 2017-18 campaign, particularly in light of a rampant injury bug that has plagued the Jags.
“Because of all of the guys getting hurt, we’ve had to deal with a lot of moving parts,” says Jones. “In some respects, I’ve been pleased and we’ve had some good games. I think we’re heading in the right direction. But to be honest, I thought we’ve have set the bar a bit higher by this stage. We could have been better and that starts with me and the coaching staff.”
That seems an interesting assessment when many outsiders would consider the job that Jones and his lieutenants have done to date to be nothing short of miraculous. When it appeared as if the injury woes would seriously undermine his team, Jones masterfully mixed and matched his personnel into a functioning unit. Moreover, he got whoever was on the court at any given time to hustle hard and believe. Jones may not share this view but to this reporter, the Jags have done some serious overachieving that merits plenty of kudos. 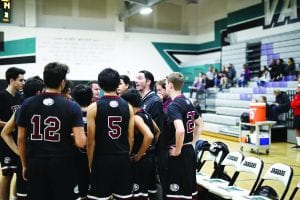 Even more encouragingly, the roster will be beefed up significantly with the expected return in two weeks of Zack Reser and Noah Tortes, a pair of reliable players who will provide the Jags with additional size and significant help at the defensive end. Couple that with the fact that the promising Mazzetti will have additional time to fully assimilate himself into the system and the Jags figure to get even better.
And Jones hastens to add that the youngster Alvarado is providing the team with something it didn’t necessarily envision but now couldn’t do without: “What a pleasant surprise Nicanor has been,” salutes Jones. “I wasn’t sure he would stick on the varsity but he’s become such a solid piece for us, particularly since he began starting for (injured guard) Mickey Chew. He’s been one of the biggest reasons for our success and he’s certainly one of the most consistent players on this team.”
But on Friday night, Alvarado’s dogged efforts along with those of his Jag teammates just weren’t quite enough. Charter simply had a threesome that wouldn’t be denied. Without a doubt, Cisinsky, Perez and Champagne formed a crowd on the court but in all the right ways imaginable.