Chargers’ season one of mediocrity and lack of achievement 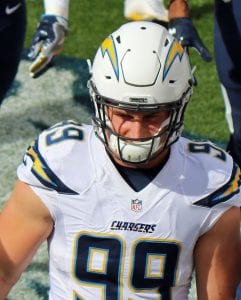 Though defensive end Joey Bosa was a standout, his efforts weren’t enough to lift the Chargers into the postseason.

One has a feeling that in the coming days and weeks, the Los Angeles Chargers’ organization and its sycophants will attempt to create the narrative that the Bolts first season back in Smogsville was in some ways a success.
Well, if you buy that, consider yourself to be among the lemmings of Dean Spanos because nothing could be further from the truth.
Let’s attempt to investigate this bogus contention just a bit further. To begin with, many prognosticators and supposedly in-the-know experts considered the Chargers to actually be a dark horse Super Bowl contender this season. Handed an exceedingly beneficial schedule that had a lot of cupcakes in it, plenty of aficionados were predicting the Chargers would make the playoffs, win their division and loom as a real threat in the postseason. The prevailing theory was that the Bolts were dramatically undercut by injuries the previous season and had they been anywhere near full strength, they would have been able to flip a number of close losses into victories. There were many who were predicting big doings for first-year coach Anthony Lynn and his club.
And the way things shook out, the stage was nicely aligned for the Chargers to indeed make some hay in 2018. From a health standpoint, L.A. (calling the Bolts that still seems sacrilege) was relatively intact and couldn’t complain on that front.
Dynamic wide receiver Keenan Allen was back with a vengeance and new defensive coordinator Gus Bradley got his defense, anchored by upfront studs Joey Bosa and Melvin Ingram, to be a legitimate and sometimes menacing factor.
But perhaps the biggest asset working in the Chargers favor was that the AFC’s West division turned out to be one of the NFL’s shakiest with nary a topflight team to be found. Denver (5-11) was nothing if not a disaster, Oakland (6-10) totally fell apart and digressed and even eventual division champ Kansas City (10-6) looked putrid while losing six of seven games.
Couple all these factors together (and plenty more), mix well, and what you should have had was at least a double-digit win season that signaled the Chargers were making their way back towards relevance.
Instead what you got was an inexcusable 0-4 start that proved telling, blown games to Denver, Miami and Jacksonville as well as a total meltdown against the Chiefs in a late-season contest that was basically for all the marbles.
The table was all but set for the Chargers to gorge themselves on a victory buffet but instead, all they did was consume just part of the fare—which wasn’t all that satisfying.
By any measure a 9-7 record isn’t one of distinction and it speaks more to mediocrity and skews towards the middling. Oh sure, the Charger apologists will credit the Bolts for digging themselves out of their cavernous start and rallying back to win nine of their final 12 contests. And certainly, that accomplishment shouldn’t be completely minimized or dismissed. No doubt some real character was revealed during that run. But if you care to plumb a little bit deeper, you’ll find that only two of those triumphs came at the expense of winning teams. In other words, the Bolts built their non-descript season on the back of taking care of mostly the dregs. Almost always when they matched up against legitimate competition, they walked away licking their wounds. In big games against stiffer competition, the Chargers generally short-circuited.
In a public relations campaign that was remarkably premature and misguided, Bolts’ management came up with the slogan of “Fight for L.A,” suggesting that the City of Angels was somehow up for grabs. The Chargers presumptuously figured that might be able to outdo the more ensconced Rams not only on the field but in the hearts and minds of the local fandom.
There hasn’t been a greater miscalculation since Hilary Clinton figured she had the election in the bag when it came to trumping Trump. Not only did the Rams (11-5, divisional champs) make the Bolts appear decidedly inferior on the gridiron, they also embarrassed them when it came to attendance. While the Rams showed some bona fide juice at the gate, the Chargers were hard pressed to fill the band box that is the StubHub Center in Carson. Even more galling, most of the time it appeared as if the visiting team’s fans outnumbered the Bolts’ supporters by a wide margin. Hey Deano, now be honest, doesn’t that make you feel the love?
So let’s get real here. Was the Chargers’ season a disaster? It was hardly that. But was it in any way, shape or form a success worthy of fond remembrance? For the deluded few who may have answered in the affirmative, an immediate trip to a shrink is highly recommended because you’ve lost all perspective, if not your sanity.
For the eighth time in the last nine seasons and for 25th time during the 34-year Spanos regime, the Bolts again missed out on the playoff party. It’s hard to find any success in that reality no matter how the Chargers may try to spin things.