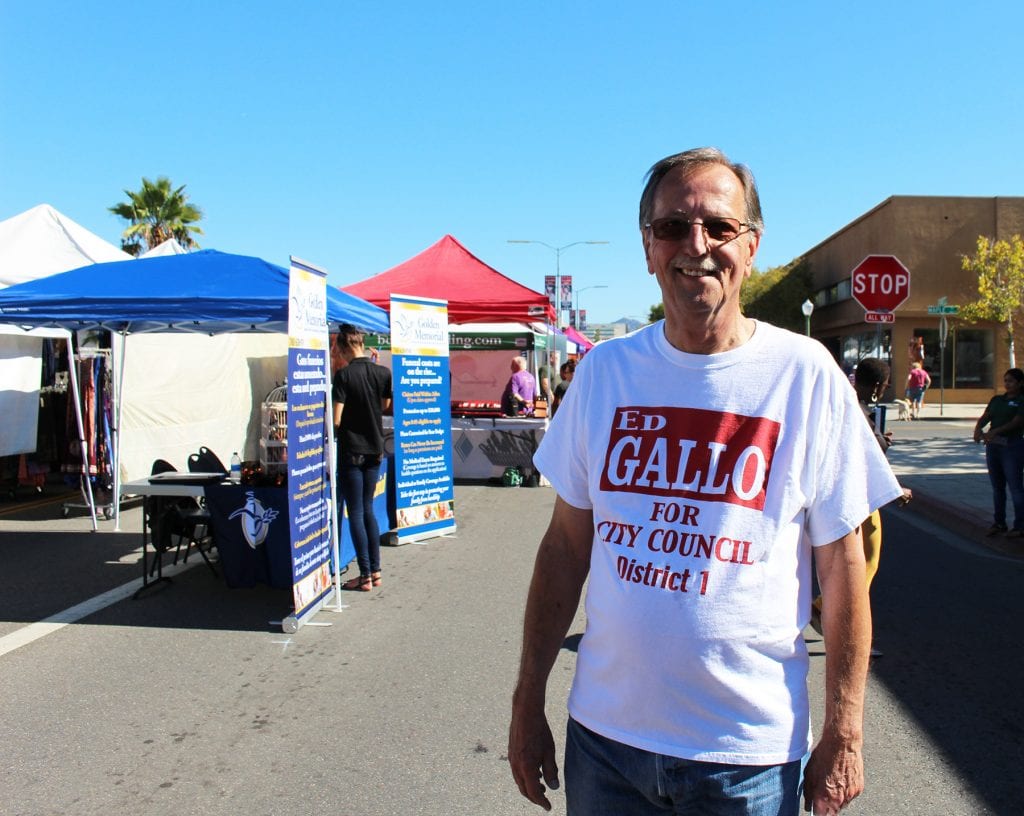 Ed Gallo, the incumbent city councilman running in the First District, has his causes. One of them, he says, has always been fiscal responsibility. “I always look at where we are spending all our money.”

I learned a bit more about this when we met for breakfast last week at Charlie’s, a longtime breakfast and lunch favorite that is almost always packed. I eat a large breakfast. Gallo, not so much. The better to talk with, which is something that the longtime councilman is known for. He likes to talk. And given that he has been in the city since 1973 and seen 45 years of history unfold during a time when Escondido began to evolve from the sleepy small town into the medium size city it is today—he has a lot to talk about. This makes him the most quotable member of the city council by far.  By the way, I bought my own breakfast.

Because people complain that there isn’t enough parking along Grand Avenue, it is a very Ed Gallo kind of thing to conduct his own unofficial survey from which he concludes that there is not a parking problem along the street. Just a frustration from some people who feel they ought to be able to park in front of their favorite store or restaurant.

It chaffs Gallo that his opponent says that he doesn’t have passions as a councilmember. Or that he doesn’t champion anything. “Fiscal responsibility has always been my passion,” he says. “That’s what I champion.”

When the subject comes up about how the California Center for the Arts, Escondido, which opened in 1994 and ran deficits in its earlier years,  has been running in the black for several years—and that it can be attributed to the stewardship of Jerry Van Leeuwen—Gallo interjects,  “and because I was the most outspoken critic of the Center’s being in the red when I got back on the board. In 2008 Lori (then mayor Lori Holt Pfeiler) agreed that we needed to fix it.”

They empaneled a committee made up of Gallo, councilman Dick Daniels, Jerry Van Leeuwen, who was then a veteran of many city executive jobs, and then city manager Clay Philips. “We came up with a new business plan to make it more of a rental facility,” recalls Gallo, “which is what it should have been from the beginning.”

As Gallo describes it, “It took three to four years for it to kick in, but ever since they don’t come to the city council with their hand out. And that is a big deal! Jerry [who was put in charge to execute the new plan as executive director] is doing a great job and he only does it part-time!”

“I’m also the champion of pickleball,” says Gallo. “It’s one of the fastest-growing sports in the country. It’s a great sport. It takes a court half the size of a tennis court, which makes it great for senior citizens and for younger people too.”

How did he begin championing pickleball? “I had a guy a few years ago put a bug in my ear about that.” And since he acquired that interest Gallo has kept bringing it up at council meetings. “The other four roll their eyes.”

Escondido isn’t completely lacking in pickleball courts. “We have a couple at the East Valley Center,” he says. “They are indoors. We have two tennis courts at Washington Park. We could get four pickleball courts out of that. The kids would enjoy playing it.”

As another example of Gallo’s concerns with saving city money, one of the things he discovered when he got back on the council in 2010 was that the city owned many single mobile home park lots. “Harmon [a former mayor] thought it up to buy to lower rents for some mobile home renters.”  The city spent about $30,000 a lot. “We ended up with four hundred mobile home park lots,” he recalls. When Gallo found out about that, he asked the city administration to come up with a plan to sell the lots off.

The city has slowly been selling off the lots ever since, at a rate of a couple a year.  That doesn’t mean Gallo opposes providing rental relief. He has supported Senior Rental Subsidies, which are provided to some residents using CDBG (Community Development Block Grant) funds from the federal government.

He also champions the use of city funds for neighborhood improvement. “I’ve just had 45 new street lights put in different neighborhoods in my district, such as the Elms, Cedar-Cedarbrook and Rustic,” he says. “Some were replacements and some were new LED lights. When some of these neighborhoods were built they only had one street light per block.”

Gallo is always looking at neighborhoods and city buildings and the city image with the motto “Eye appeal is buy appeal,” in mind. “We are selling the city,” he says. That is one reason why he has been so insistent about fighting graffiti over the years. “We are getting graffiti under control, although it will never be gone completely. But we are getting it removed sometimes in one day. I saw it done in three hours recently.”

He refers to the “one broken window” philosophy of policing where you don’t allow one broken window to appear in a neighborhood without acting. He’s been passionate about eradicating graffiti since the early 1970s when he was a member of the Jaycees and one of their projects was sending out teams to paint over graffiti.

“It was a great program,” he recalls, although there was one time that the team painted over several examples of graffiti until the wall looked like a patchwork. The owner of the property finally said, “Just let me do that.”  Gallo grins at the memory. “That’s how long we have been painting over graffiti!”

Gallo doesn’t call up reporters when they report things he doesn’t like to read. “I don’t call the media and a I don’t do self-promotion,” he said. “I just do the job I was elected to do. Make Escondido a better place.”