Chamber to host job fairs for businesses trying to hire

The anemic federal jobs report announced earlier this week was brought close to home by Escondido restaurateurs who say they can’t get hire workers as the world opens up and people start going out to eat again. They find that they are competing with the federal and state governments’ continuing payments for employees.

A restaurateur who owns many restaurants in a chain, including some in Escondido, told The Times-Advocate that the reopening of his eateries into “normal” business is being hampered by the fact that so many people who would normally work in a restaurant don’t want to come back to work because they are collecting as much in unemployment from the state and federal governments as they would if they were working.

An additional problem, he said, is that his restaurants—and others that he knows—are not getting as much product delivered to them as they need because many truckers have not returned to work. Some may not return until unemployment benefits run out in September. That means restaurants are often close to running out of some foods.

“My staff is also under an enormous amount of strain because they are covering several jobs,” he said. “This harms our service to our customers and lead to many customer complaints about food and service.” The owner said he has offered bonuses for workers to return to work and other incentives, but without as much success as he would like.

Louisa Magoon, owner of the Grand Tea Room, told The Times-Advocate: “Yes, I have heard the same thing.  I have two employees who didn’t come back to work because they said they’re afraid of COVID.  We all are but we have to get back to work.  I have heard the same thing that they are not motivated because their unemployment benefits are enough for them.”

Not meeting the demand

Pauline Gordy who owns CSL Staffing in Escondido is alarmed at the unprecedented labor market. “It’s very interesting times,” she told The Times-Advocate. Her staffing company fills job requests from many clients, not for a particular industry. “We do it all,” she said. “I have clients who are indsturial, medical, call centers—you name it. We also have jobs right across the board, from janitorial, warehousing, social media to accounting managers. We are crossing the divide in terms of entry level to mid-level.”

With over 300 open orders from North County businesses: “We can’t get enough people to fill them.” Each week they are filling five to ten fills when they average 20 to 30.

“So, we’re trying to understand the market,” said Gordy. “We recognize that childcare is an issue, so I partnered with Tootris, a childcare provider and bought memberships for my employees where someone will reach out to them and match them with affordable childcare.”

Some people say they can’t go back to work. Another issue, said Gordy, is people who have moved from California due to cost of living. “They don’t want a job unless it’s remote. They want to get California wages and pay taxes in another state,” she said.

Restaurants have been “hit so badly through this,” she said. “Many were shut for thirteen months and now they can’t get their people back. They pay minimum wage and make it up with tips and people aren’t prepared to come off unemployment. Nobody has actually said these words, but this is my perception of what is happening.”She infers it from the lack of applicants.

Through the pandemic, she said,  “we actually did very well because at the beginning it was only essential busineses. We saw some of our clients having to close and those that were essential, thrived, and they were able to stay open. Other warehouses had to close. You saw demand go up in one and fall in others. But we could get workers.”

She didn’t see the current worker “drought” coming. “We have no available workers. None. I tell them I will do whatever I can and utilize all our platforms but the reality is. . . My costs have gone up through the roof because I have to work doubly hard on advertising and people on the streets speaking to people.”

They visit the Escondido Swap Meet. They attend job fairs. “We are really going back to basics, said Gordy. “The tools are just not penetrating. I’m really scared to see  thatthis might stick through until September if nothing changes. These businesses want to get back up and running but many can’t stick around much longer. If we can’t provide them with labor they can’t meet demand.”

James Rowten, CEO of the Escondido Chamber of Commerce, seconded those sentiments. “Yes, we have received many of the same comments about hiring,” he told The Times-Advocate. “So many in fact that we’re going to host three job fairs beginning this month so on Thursday, May 27 from 9 a.m. – 3 p.m. we’re hosting a Job Fair which will be a hybrid in-person job fair with giveaways, a food truck and representatives from a bevy of local businesses.”

Rowten added, “Applicants will have the opportunity to meet hiring personnel from various employers who are looking to fill jobs immediately. And, these are not all minimum wage positions.”

Alex MacLachlan, president  of the Escondido Downtown Business Association, commented, “Yes, I’ve very much heard similar anecdotes from business owners and people in positions of management in several states. They keep offering more dollars per hour and it’s still not enough to get people off unemployment.”

He added, “The other night we had a friend over who is the general manager for a luxury spa and country club in the area. He kept complimenting me on my serving skills until I said, ‘Are you so desperate for help you’re trying to schmooze me to work for you?’ He said, ‘You have a heart beat don’t you?’ ”

Regarding the businesses along Grand Avenue: “I think many of the downtown business owners got loans and things to keep a skeleton staff on hand and are adding as restrictions are lifted but larger outfits like Barrel Republic have been hanging Now Hiring banners out since their staffing needs may be a little larger as a newly opened business on Grand Avenue.” 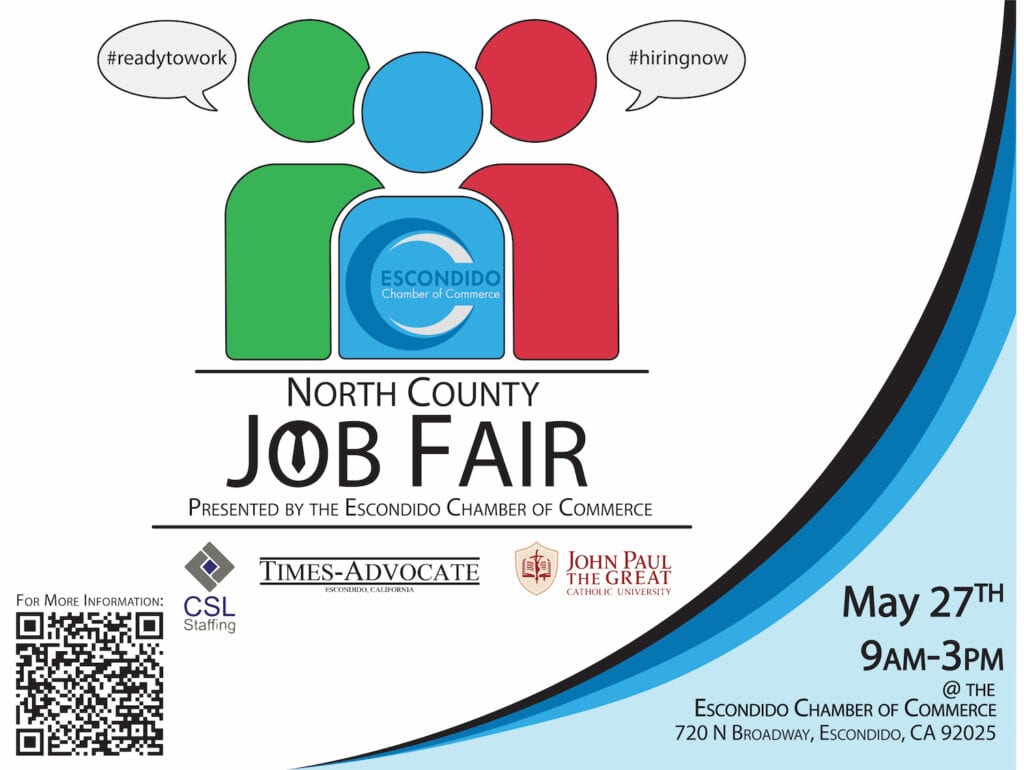