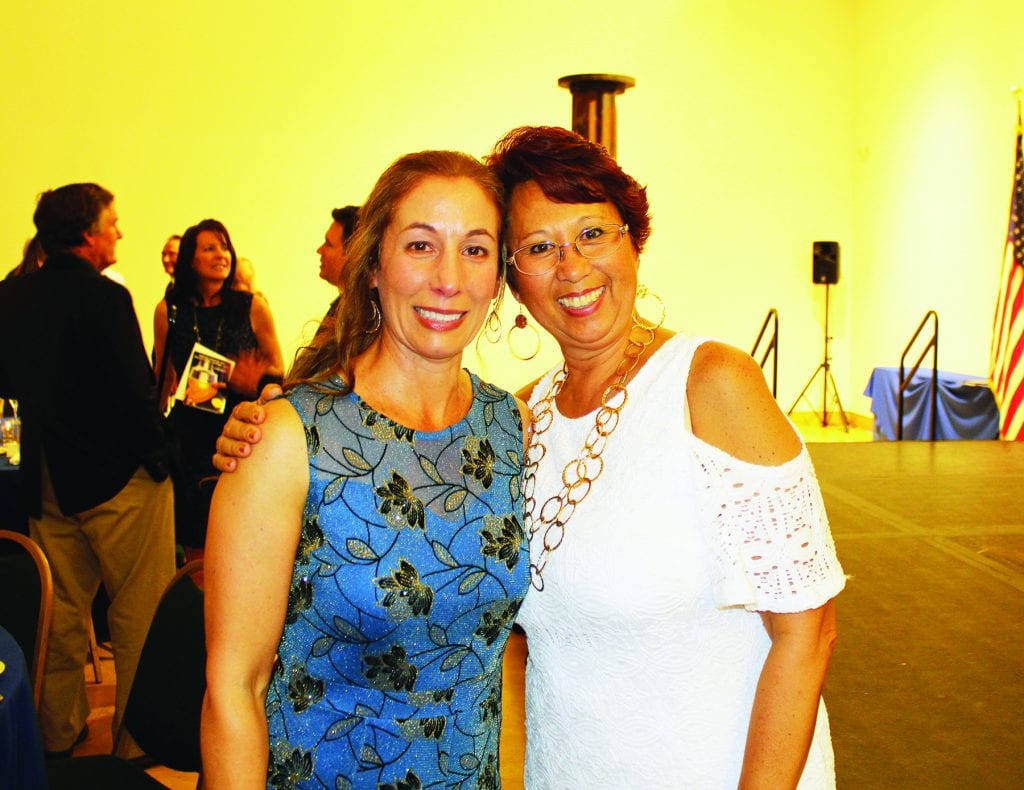 The Escondido Chamber of Commerce figuratively “passed the torch” from one generation of leaders to another Friday night at the annual soiree at the California Center for the Arts, Museum.
As CEO Rorie Johnston told The Times-Advocate when we asked if there was a special meaning to this year’s theme: “It has been the intent of this board to provide leadership opportunities for the next generation of business leaders.
Technically it was the 108th annual Installation and Awards Dinner, and actually it was the community’s celebration of its business leaders.”
Johnston shared the MC honors with Ken Lounsbery, who, Johnston noted, has had “Thirty-eight years of service to the business community.”
Outgoing Chairman Kevin S. Svetich, went over his year at the helm of the Chamber, declaring, “Last June, as incoming Chairman of the Board I presented a vision, goals and a work plan for the year. ‘The only place that success comes before work is in the dictionary.’ -Vidal Sassoon
Our Chamber’s Board of Directors, our CEO President, staff and volunteers tireless work ethic is directly responsible for a very successful year!”
His remarks highlighted the “passing the torch” theme. He noted that the board of directors, “reflects a cross section of our diverse membership group and is a balanced mix of experienced, proven leaders and new voices with fresh ideas. “We have five Past Chairs serving on our board; Linda Bailey, Fred Baranowski, Constance Larsen, Ernie Cowan and Brian Murphy.”
The Chamber has added new board members Christine Antoine, Meagan Baker, Judy Fitzgerald, Mayra Salazar Magos, Jerry Van Leeuwen and Don Romo “and while they may be new to our board they are certainly not new to our community and all bring fresh ideas and enthusiasm to the team,” Svetich said.
He noted three “power house committees,” that “bring programs that help make the Chamber a regional influence and bring value to our Chamber members.”
“Dr. Luis Ibarra is the architect of the new Education Committee and has already drafted several successful programs.
“Matt Pound and Tom Stamos’s innovative approaches and unique vision has revitalized the Economic Development and the Government Affairs committees.
“Rounding out our board of directors are seasoned board members; Dr. Derry Connolly, Joe Coyle, Mona Durney, Dan Meyer, and Kristen Steinke.”
Svetich presented three board members with Board Member of the Year Awards: Mona Durney, Tom Stamos and Dan Meyer. He spoke briefly about each of them.
“President and co-founder of Rancho Computer Networks and a Better Connection, Mona Durney says ‘I am a people person who loves to help.’ You may know her from her work with Carols by Candlelight supporting Rady Children’s Hospital. I know Mona is dedicated, thoughtful and her positive can do attitude and enthusiasm is contagious!” said Svetich.
Real Estate professional and 2013 Realtor of the Year, Tom Stamos, started Escondido Realty and later merged with EXP Realty. As a “rookie” board member Tom fast tracked to lead the Government Affairs Committee and join the Executive Committee. “Tom brings a welcome calm, confident demeanor and positive outlook,” said Svetich.
Dan Meyer handles Community Relations with Escondido Disposal Inc. “Dan is another positive ‘voice of business’ with a ‘we can do it’ attitude. His counsel regarding community relations is always ‘spot on’ and Dan has the ability to quickly turn new ideas into profitable events.”
Concluding his remarks, Svetch said, “Yes. The Chamber has had a very good year: “we developed our Board of Directors, and procedures. We created new programs. We molded financially draining projects into profitable, useful tools. We were advocates, supporting and opposing propositions and bills. We gave donations, awards and scholarships. We won awards. We grew larger and more financially secure. And we did it all with you.”
Awards were presented in the following categories.
Dr. Craig J. Mohnacky was presented with the Jim Felix Community Volunteer of the Year Award.
Richard & Donna Aeling were given the Jack Raymond Civic Engagement Award.
Patio Playhouse, the oldest community theater group in San Diego County, was honored as Community Organization of the Year.
Dr. Luis Ibarra, superintendent of the Escondido Union School District, presented the Friend of Education Award to Mission Federal Credit Union, which was represented by Cindy Sandback and Diana Ghaderpanah.
Tom Hawthorne was awarded the Business Leader of the Year award. He was not present to accept the award and was represented by George Weir.
Steve Waldron, creator of Cruisin’ Grand, was given the Community Enhancement award.
Mark Mendoza of Kennedy’s Meat Company, accepted the Family Owned Business of the Year award.
Yessenia Mendoza, this year’s president of the Chamber Ambassadors, was honored as Ambassador.
Finally, Rorie Johnston wished a fond and tearful goodbye to Claudine Rumbawa, who is moving to Texas. “You have been my solid rock, my comrade, friend and sister in crisis,” said Johnston. 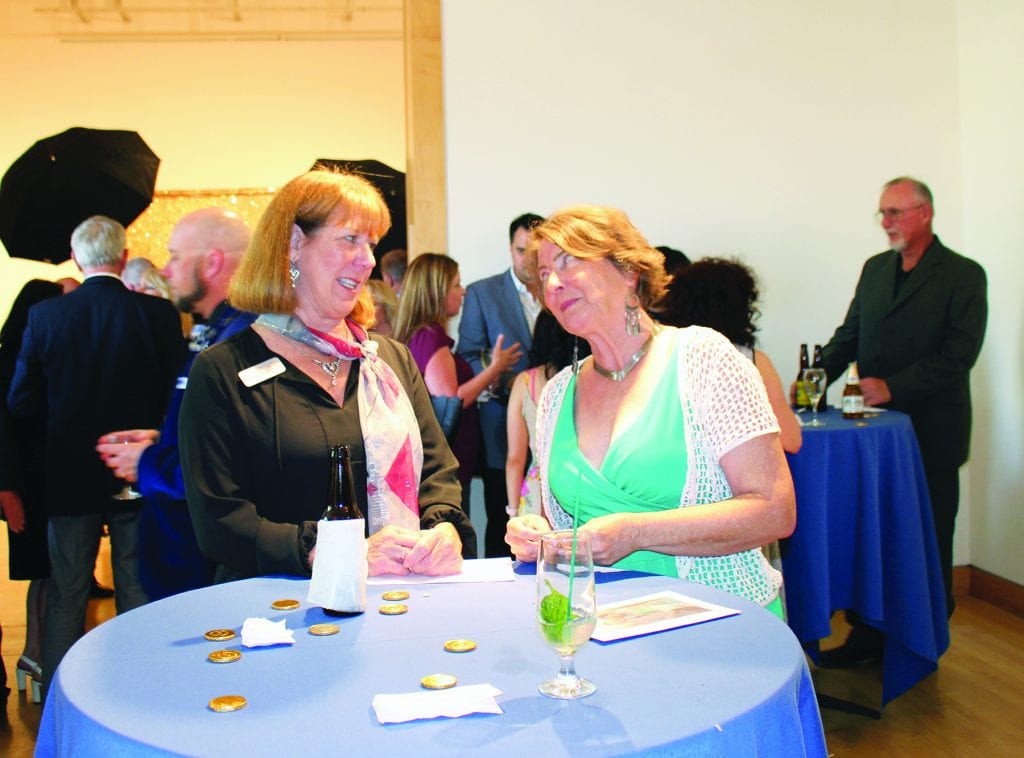 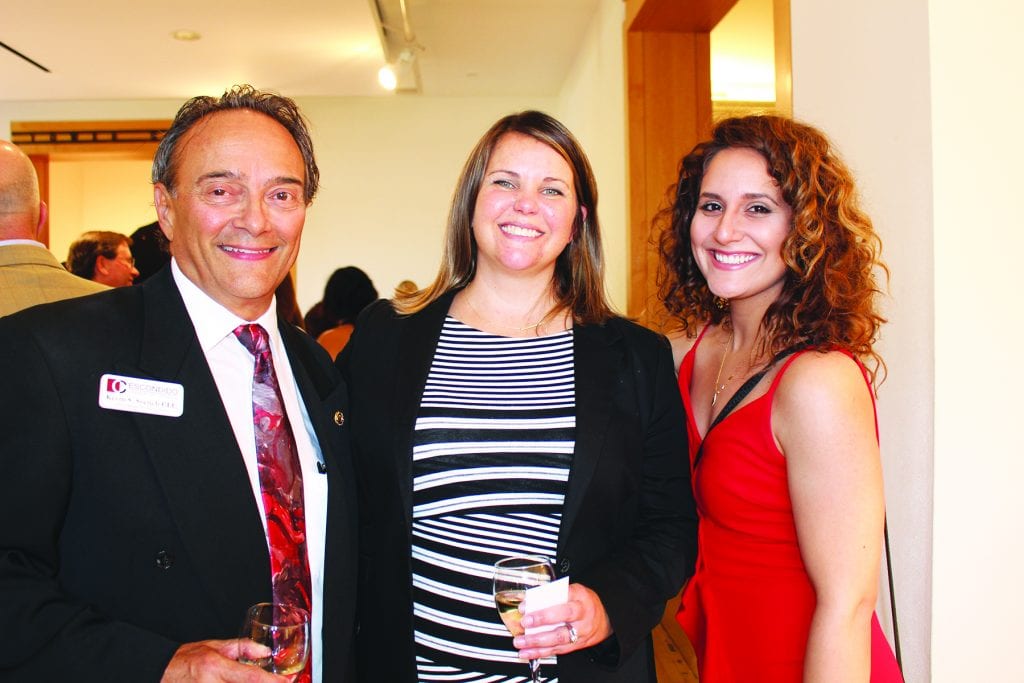 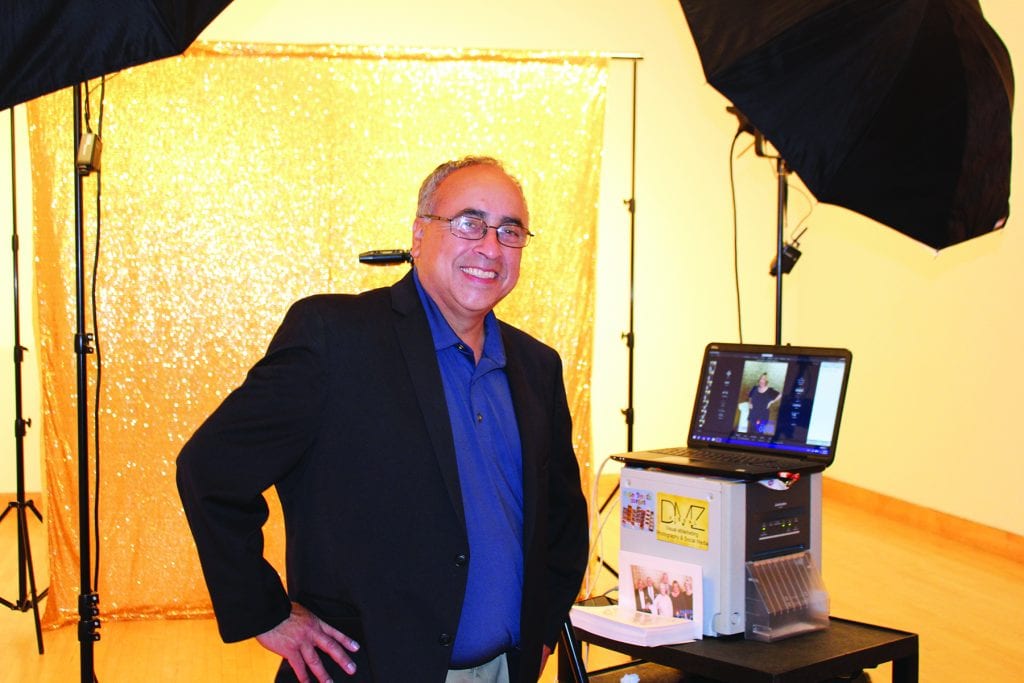 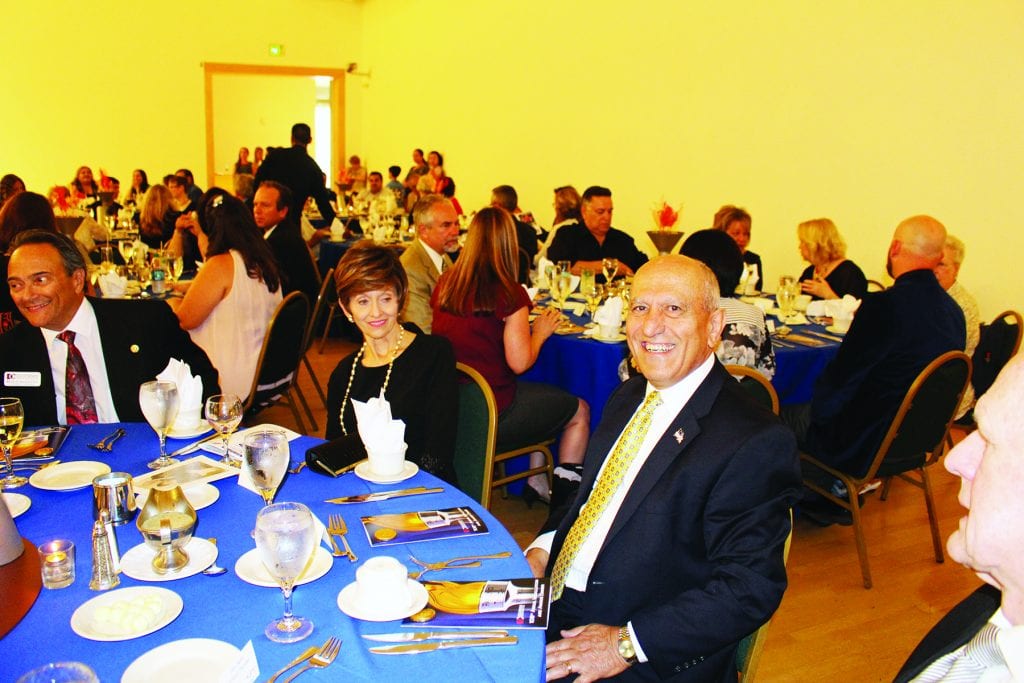 At the VIP table with a beaming Mayor Sam Abed. 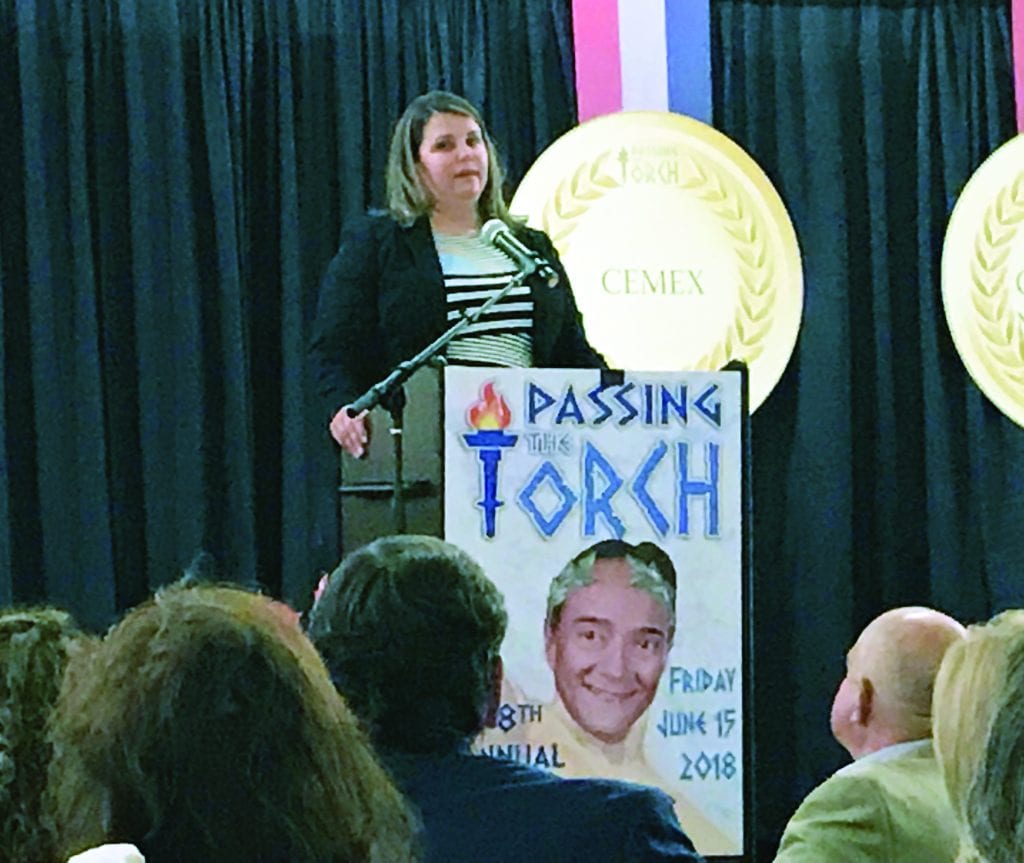 Incoming Chairwoman Kristen Steinke talks about the upcoming year at the Chamber. 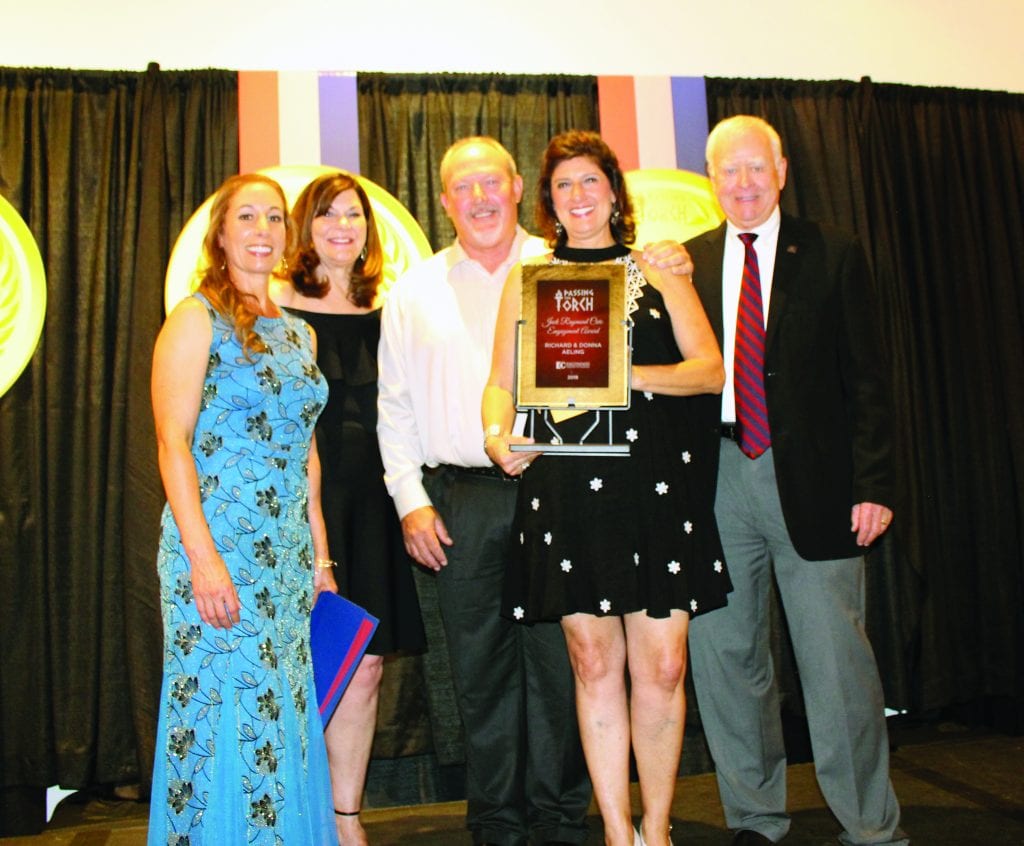 Richard & Donna Aeling were the recipients of the Jack Raymond Civic Engagement Award. 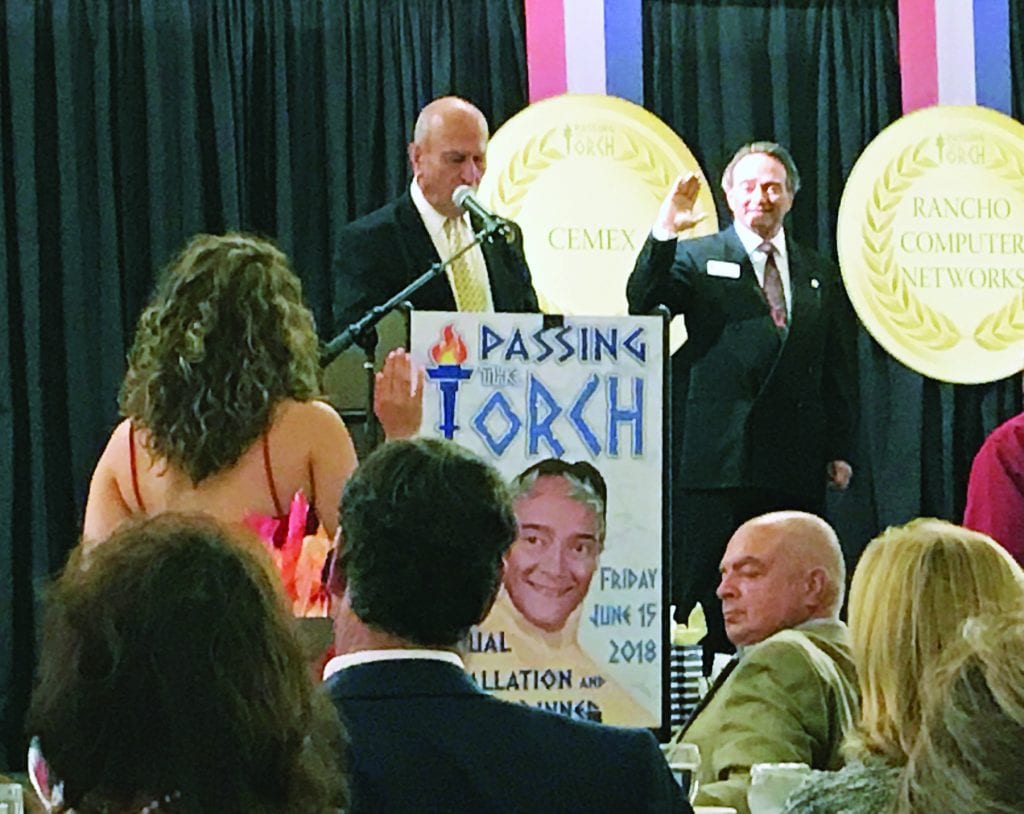 Mayor Sam Abed (at the rostrum) leads the officers and board of the Chamber in taking the oath of office for the coming year. 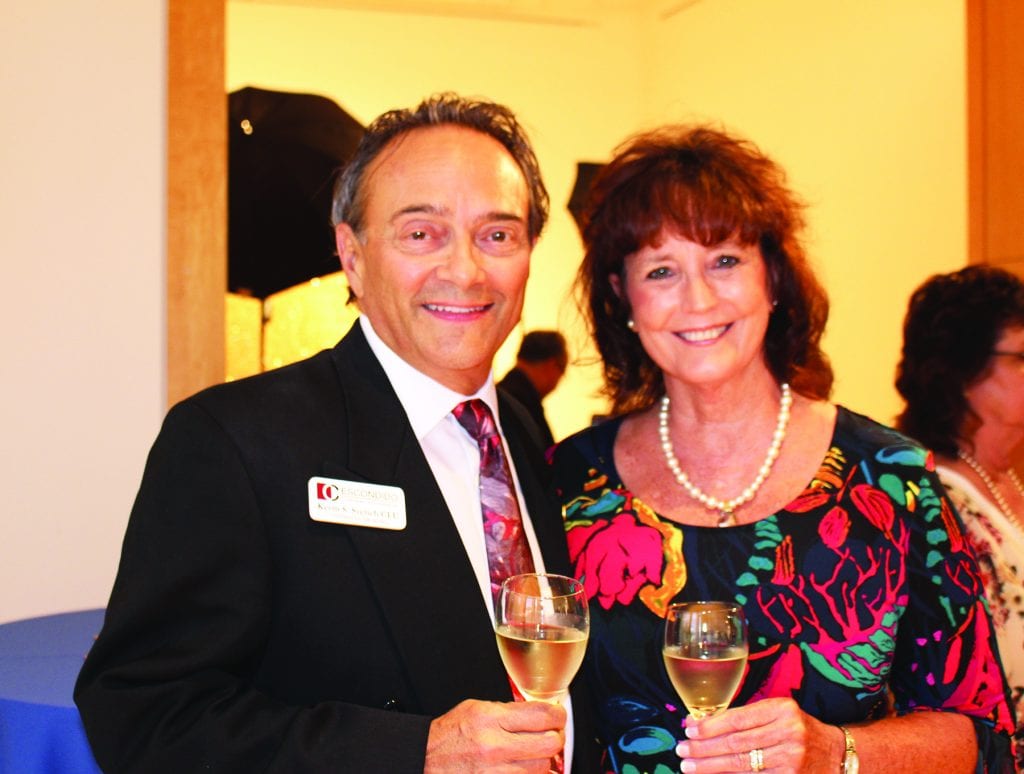 Kevin & Debbie Svetich relaxing during the happy hour before the installation. 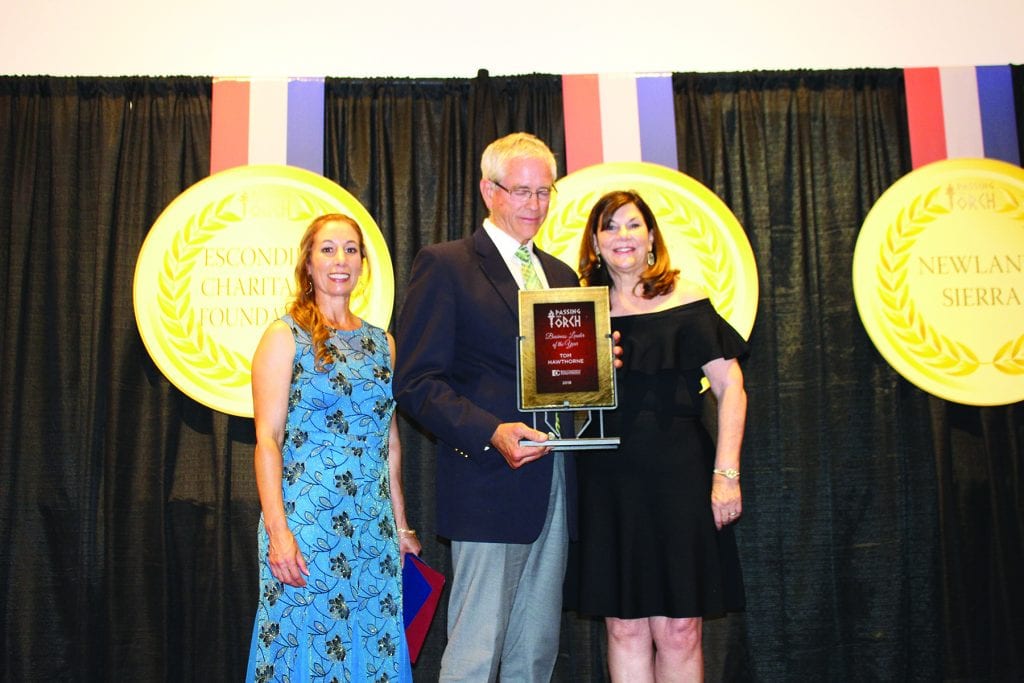 George Weir (center) accepted the Business Leader of the Year for Tom Hawthorne, who is out of town. Also shown are Rorie Johnston and Linda Bailey of the Chamber. 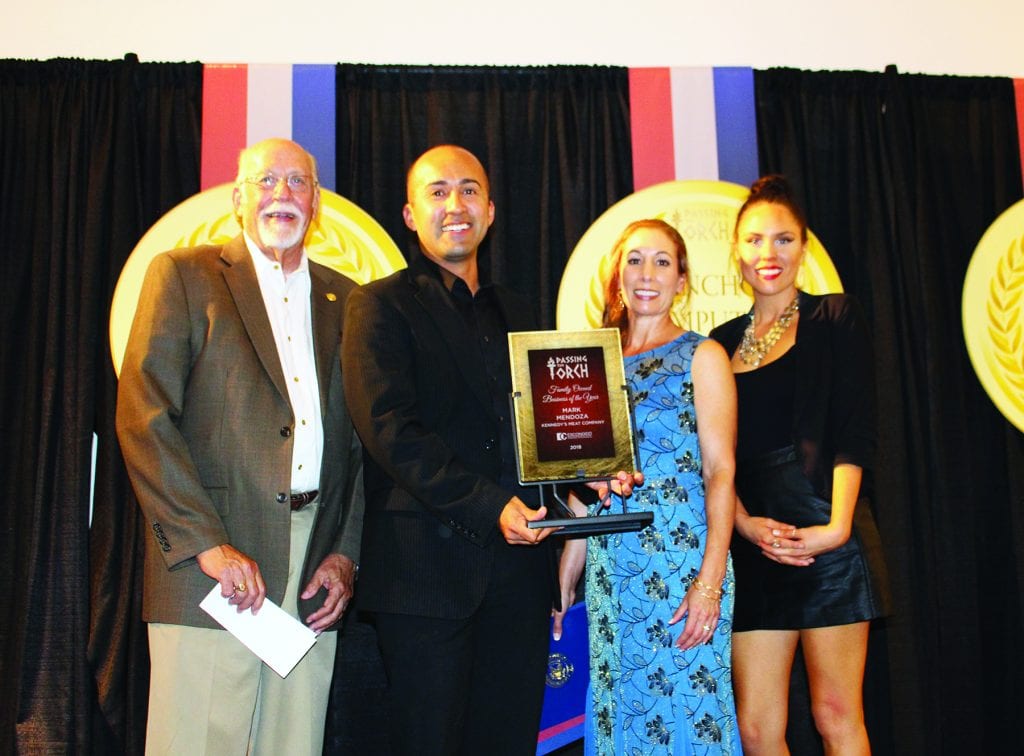 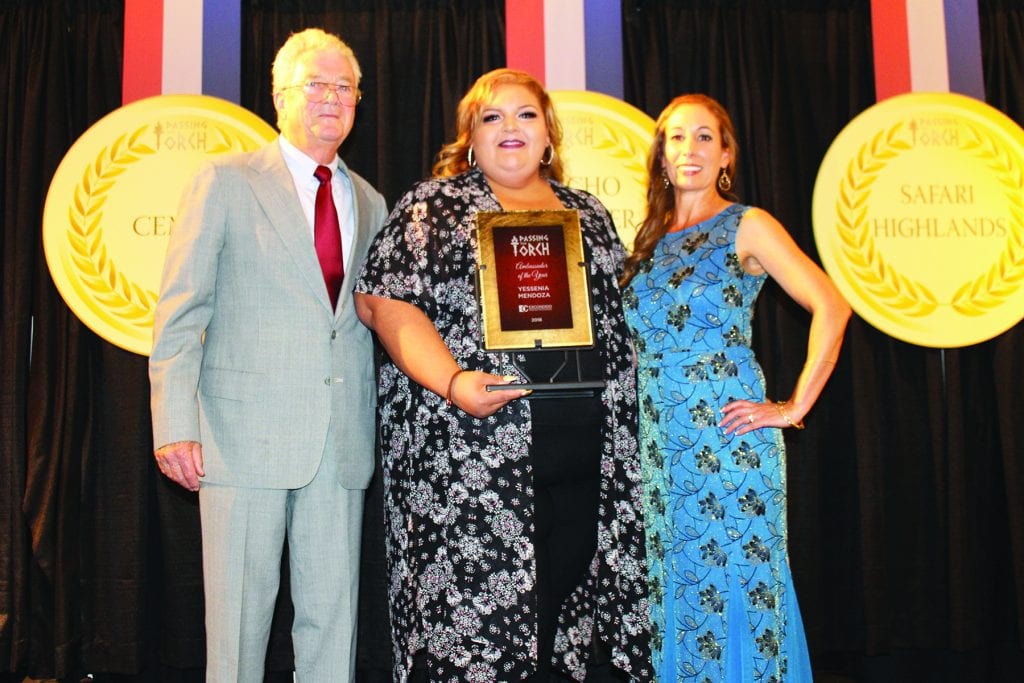 Yessenia Mendoza, center, was honored as Ambassador of the Year. 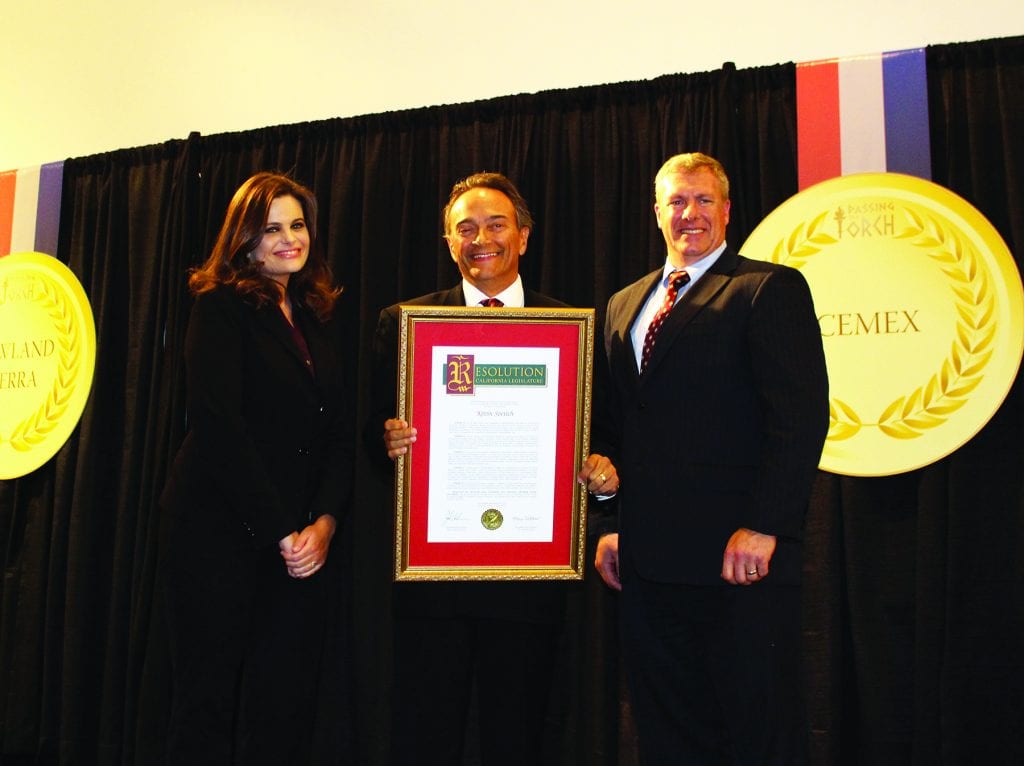 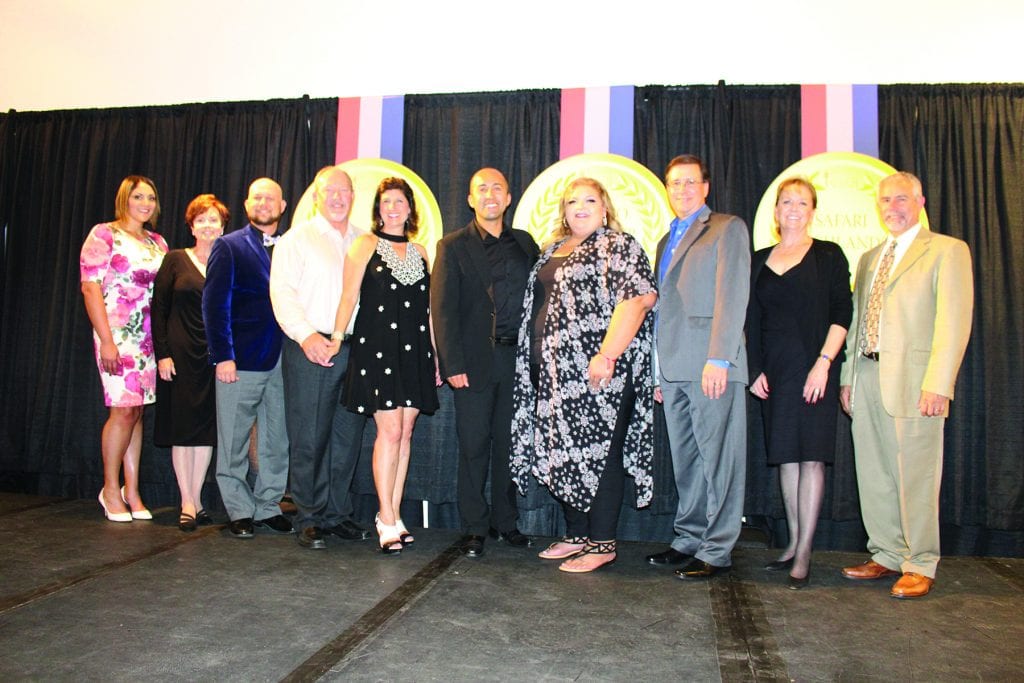 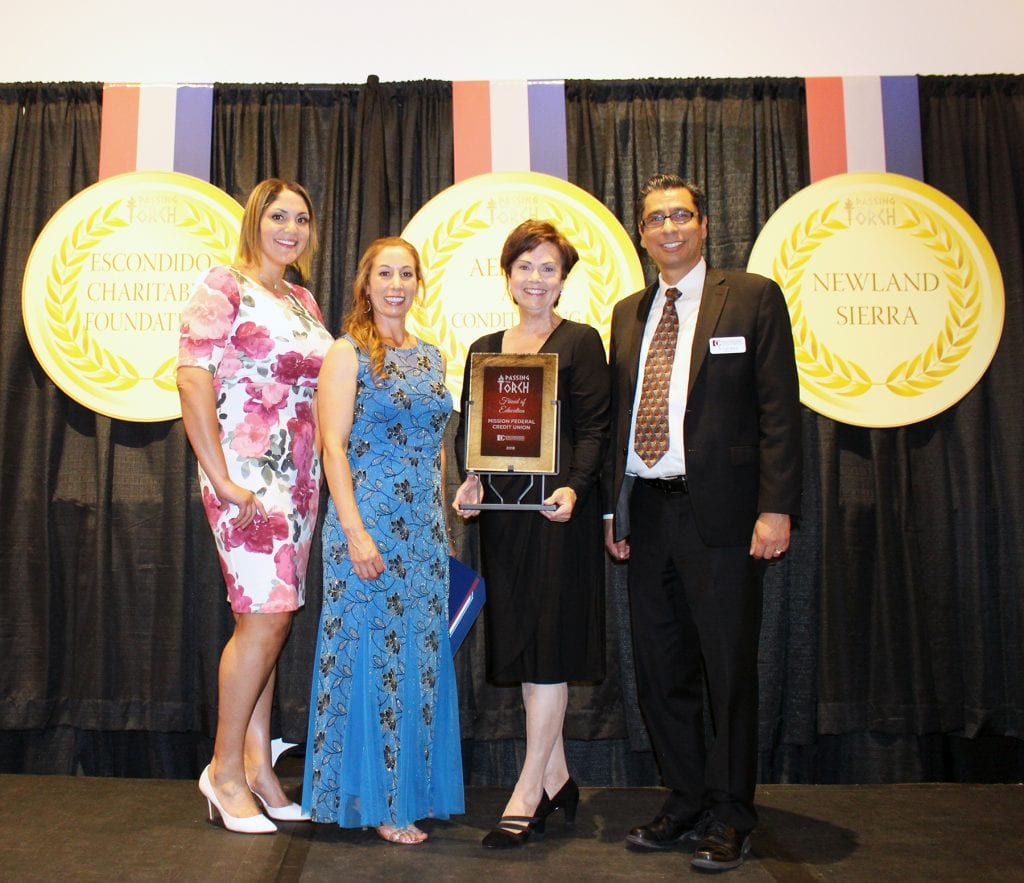