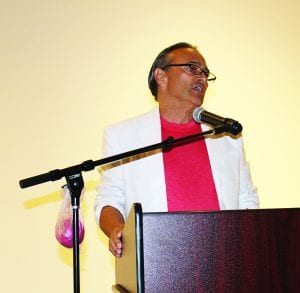 The Escondido Chamber of Commerce Friday night installed officers and honored local businesses and volunteers—all in a breezy Cuban style at the California Center for the Art, Escondido, where the theme was “Havana Nights.”

Outgoing Chairman Linda Bailey wished everyone a fond farewell as leader, and was honored for her year of service with awards from representatives of various elected officials, including Congressman Duncan Hunter, Assemblywoman Marie Waldron and Senator Joel Anderson.

Mayor Sam Abed also presented Bailey with a plaque honoring her service and then administered the oath of office to the new board of directors and officers.

The evening started with Cuban style finger foods, prepared by the staff of the California Center for the Arts, Escondido, with live music provided by Jimmy and Enrique.

Then Stephen Fishwick presented a bravura performance as he painted a portrait of the Statue of Liberty to various patriotic tunes, such as Neil Diamond’s “Coming to America.”

Dinner ranged from a Vegetarian Napoleon to steak and fish entrees, also prepared by the Center. 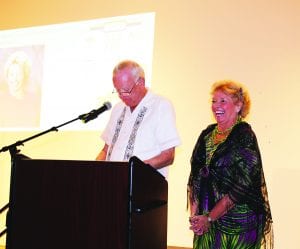 Dr. Karen Haynes, president of Cal State San Marcos, was honored with the Jack Raymond Civic Engagement Award. Dr. Haynes is the third and now longest-serving president of California State University San Marcos (CSUSM), a post she has held since 2004. In the summer of 2016 she became the senior president in the 23-campus CSU system—the first woman to ever serve in that role. She has served for over 30 years as an academic administrator.

At CSUSM, Dr. Haynes has overseen advances in serving traditionally under-represented student populations. She leads CSUSM with her eye continually trained on increasing the educational attainment rate of the region and engaging CSUSM with the community in unique and meaningful ways Dr. Haynes has overseen tremendous growth at CSUSM, with the opening of several new facilities, the addition of a Temecula campus, and the launching of relevant new academic programs and career certificates. 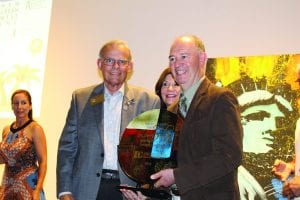 Business Leader of the Year

Dr. Derry Connolly of John Paul the Great Catholic University, accepted the award as Business Leader of the Year.

As Professor of Business at the  University Dr. Connolly teaches Entrepreneurship, Business Model Innovation, Entrepreneurial Thinking, and Strategic Marketing Management. He mentors students in the business creation process as part of JPCatholic’s Business LaunchPad. Prior to JPCatholic, he worked at the University of California, San Diego where he most recently served on the Executive Board of the Center for the Commercialization of Advanced Technology (CCAT). He previously served as the Associate Dean of Continuing Education at UCSD Extension, leading a program with 40,000 part-time adult students, 125+ fulltime staff (academic and administrative), 1500+ part-time Instructors. Prior to UCSD, Dr. Connolly spent 15 years working in industrial Research and Development with IBM and Kodak. 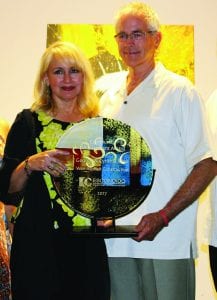 Mayor Abed introduced the new Chamber Chairman by joking about the three other times Svetich has served in this job (compared to one for Abed) and concluded, “I don’t know of anyone else who has contributed so much of themselves to the Chamber of Commerce as Keven Svetich.

Svetich gave an upbeat assessment of the Chamber’s past, present and future. The full text of his speech is reproduced below:

“The Escondido Chamber of Commerce is stronger than ever and we have ALL good news for our members and supporters. The Chamber’s Board of Directors is a balanced mix of experienced, proven leaders and new voices with fresh ideas.

“To paraphrase a quote from an experienced leader in our audience ‘The Chamber is connecting business people who care with business causes that matter. Thank you, Jack. 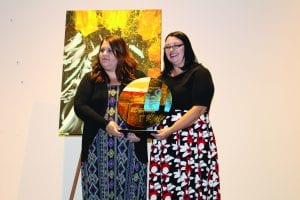 Megan Comer and Nicole Lockrem of Alhiser-Comer Mortuary, accept the award for Family Owned Business of the Year.

“Let me introduce a few members of Our team: Mona Durney of Rancho Computer Networks is a successful business woman and philanthropist, you may know her from her work with Carols by Candlelight supporting Rady Children’s Hospital. Mona will watch over the Chambers finances. We will run a balanced budget and every program will be evaluated with three key criteria: Member benefit, profit and people.

“Not only will the program benefit our members but the program will pay for itself and include the work force.

“The Economic Development Committee is an excellent example of partnering an experienced leader and a new voice with fresh ideas with Ernie Cowan, North San Diego County Association of Realtors and Matt Pound, Escondido Sand & Gravel. 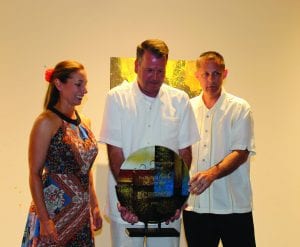 “Tom Stamos, Escondido Realty and Express Realty will chair the Government Affairs Committee. Each month Chamber members can attend a meeting and connect with a representative for our Senator, Congressman, State Assembly member, District Supervisor and City Council – and you will usually find Escondido’s Mayor in attendance as well. Our immediate Past Chairwoman, Linda Bailey, Community Strategies Group Inc. is an inspiration for all of us as an example of how to overcome adversity and Linda will continue to work with me and our Board to help mold the future of the Chamber. Kristen Steinke, attorney with Lounsbery, Ferguson, Altona & Peak LLP is our Chair-Elect. Kristen (who just delivered her second child) has helped originate and develop a new generation of leaders with the Young Professionals group. This has also created an exciting power partnering of several Board members – Kristen, Matt and Judy Fitzgerald,  Crossfit Xsytum. Chamber Leaders. Our future is very bright! Our newest additions to the Board include another experienced leader, Jerry Van Leeuwen, executive director California Center for the Arts, Escondido and new voice, Meagan Baker, from Printing Solutions. 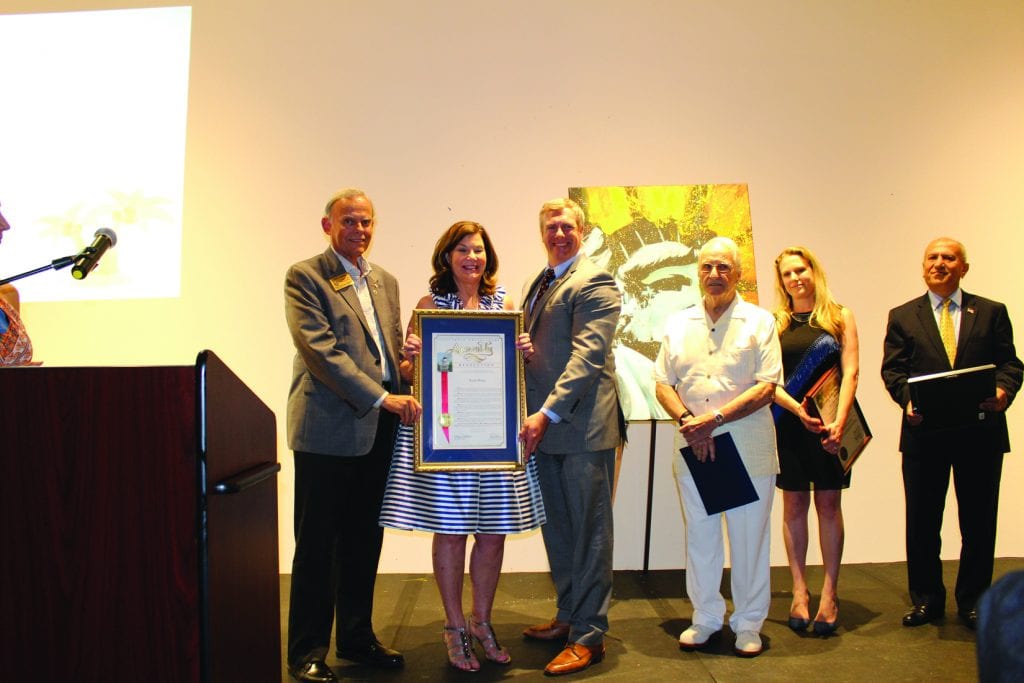 “I once was told when it comes to planning ‘You can’t tell which way the train went by looking at the tracks. It is good to know your history, but make today count and you will never need worry of the future.’ Today we stand on the shoulders of all those who have served before, many who remain strong Chamber supporters.”

Svetich asked all past chairmen in attendance to stand. 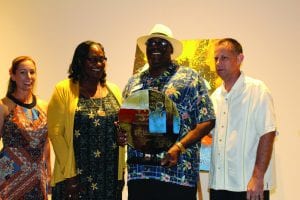 Entrepreneurs of the Year Maurice Trammel and Cheryl Wright of Wright Trammel Transportation, are flanked by MC’s Rorie Johnston and Carl Skaja.

and our own volunteer of the YEARS, Kitty Aeling – a truly wonderful Chamber workface.

Best wishes to all for a fabulous Chamber year!”

At the end of the evening Jack Raymond was auctioneer for the Fishwick painting, raising $2,000. Marv Gilbert had the winning bid. The funds will go to the chamber.