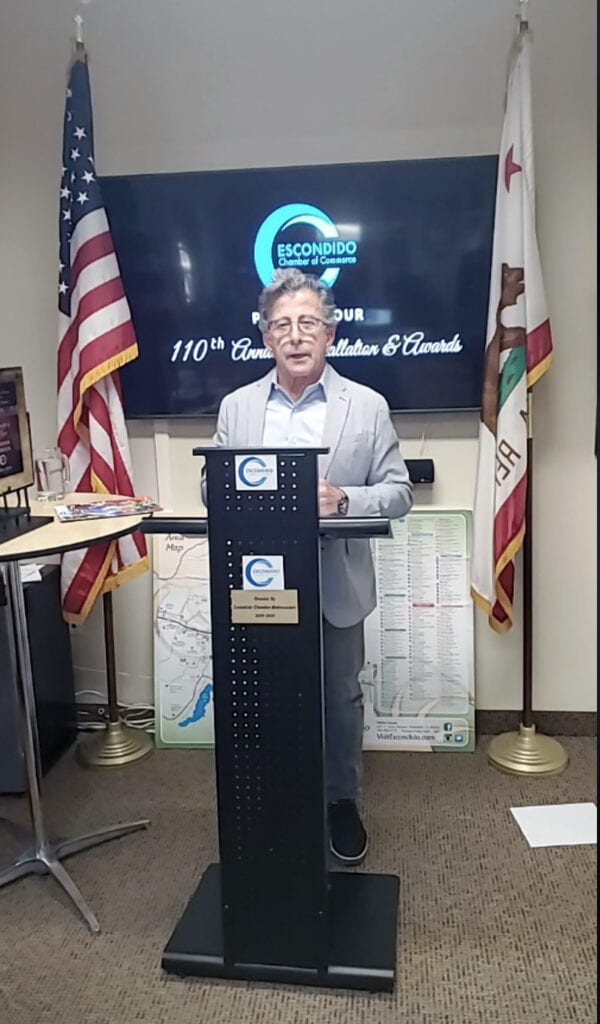 The Escondido Chamber of Commerce Thursday evening remotely installed its 2020-21 board of directors and ambassadors during the 110th year celebration.  Escondido Mayor Paul McNamara administered the oath to the members who attended via Zoom.

James Rowten, chief executive officer of the Chamber, was MC for the event. It has been a year since he took over as CEO. He talked about programs the Chamber has instituted, and what it hopes to do in the upcoming year.

“Members are what the Chamber is all about,” said J.R. This year the Chamber hopes to sponsor candidate forums. He invited sign-ups for the 36th annual charity golf tournament this winter.

Rowten also thanked key people who helped make him feel at home in his job, singling out the Chamber’s director of marketing and development, Chris Cochran, “He has been a great support and is always enthusiastic and smiling,” and Elana Rheinhart, “who has taken social media to great new heights.”

The evening’s keynote speaker was Dr. Christopher Thornberg, founding partner of Becon Economics, whose topic was “A funny thing happened on the way to the depression.”

Given the pandemic’s impact on the economy, the big question, said Thornberg, is whether the economy’s movement will be a “U” or “V” or even a “W?” “Is this going to be a long painful recovery versus those who are saying “V” which is a relatively quick recovery?”

The two basic issues, he said, “are the health of the economy and the ability for the economy to rebound from what’s been going on the second part of this year.  Of course, that has to do with whether or not this virus is going to continue or whether we’re going to actually get a handle on it and start pushing this thing away.”

Many compare this to the Great Recession of 2008-2009. “You can see, of course, just how profound the downturn was,” he said. “In about a year and a half the US economy contracted by six percent. But more importantly it took seven years to recover. It wasn’t until about 2016-2017  that the economy started functioning normally.”

Today the Congressional Budget Office is talking about a very similar situation, which might also take six or seven years to recover from. However, Thornberg contends, “The recession is over and we are already on the path to recover.” He continued, “In terms of thinking about what this recovery looks like I have a pretty big problem with the idea that this is a Great Recession type scenario.”

The tendency is to always view the recession in terms of what just happened. “But that isn’t always necessarily appropriate when you think about the Great Recession and indeed the fact that the Great Recession and the Great Depression were the two worst recessions US economy faced in the past 150 years,”  said Thornberg. Both occurred because of the collapse of “massive financial bubbles.”

The worst economic downtowns have always been caused by financial bubbles. “I appreciate that this recession came out of no place but it is not a recession driven by a financial bubble. In fact, quite the opposite. When this pandemic arrived on our shores driven by consumer fear there was no major structural shift in the economy. There was no rebalancing of balance sheets.”

Because of bad government policy, he said, the U.S. experienced a second surge in cases. But the good news is “The new surge looks to have peaked” and “The new surge paused the recovery, it did not cause a double dip recession.”

He continued, “Imagine a couple weeks into the pandemic some genius came up with a cure for the virus. We would say all these people who were laid off, all those ‘ lost’ jobs are going to come back because it is a cure. People can reopen their businesses. They can reopen the restaurants and things can get back up and running normally again relatively quickly.”

The same is the case now, although a cure hasn’t yet been discovered.

The “new surge” is not a new surge at all, he said, “only expansion of the first wave into new places.”  Consumers have reacted faster than governments. Businesses are learning how to mitigate the virus’s effects. “Consumers understand the risks and although we had a second surge there has not been a collapse in economic activity. Quite the opposite. The economy has remained remarkably stable through this second surge.” What the new surge means is “that recovery is now pushed out to next year.”

Thornberg predicts unemployment below 7% by the end of the year, “moderate upticks in debt distress with little impact on real estate values and a lag in retail, restaurants and tourism.”

The third quarter should also see continued reopening of businesses.

He concluded, “The biggest problem we’re facing is this incessant need to make things worse than they are and the inability to sit down and have basic real conversations about the true cost benefit analysis. We’ve turned it into something far worse. As a result of that, we’re following up a bad situation with bad policy and that’s not good ultimately.  “I’m very positive we’re going to get back up and running by 2021 this is going to be a distant bad memory.”

Rowten introduced Don Romo, whom he described as “a hybrid.” “He’s the current board chair and also the incoming board chair. He’s been a great resource for the Chamber and for myself. I really appreciate all he’s been able to do.”

Romo thanked a host of people (the mayor, board members, attendees etc.) before outlining his goals for the year of growing membership by having every business in the city “large and small” become a part of the Chamber.

He called on the Chamber to “Find ways to partner with the city to help all businesses thrive” through projects such as “Escondido Eats,” to help new businesses make it through the city process. To introduce them to the Chamber and work to “make Escondido the best place to start a business large or small.”

Based on sales tax revenue Escondido is the third in the County, behind the County itself and the City of San Diego.  “We are a community of doers; business owners who still work in their businesses on a daily basis small and large. Such as Superior Ready Mix, Brian Murphy Furniture and Grangetto’s. A blue collar town of people who are not afraid of hard work. They show up every day and roll up their sleeves and they get busy and start getting work done; getting things accomplished and it’s some pretty phenomenal numbers.”

He was impressed by the numbers Thornburg quoted in his talk. “We are really poised for that recovery he discussed.” Romo wants to change the narrative of Escondido. “I want to make sure we become a better partner with the city council and City Hall to look at ways we can help lift Escondido up. It’s our turn now to dictate what we think Escondido is and make it what we want it to be and start to work on it. We need to start thinking big. We need to start getting together and getting big ideas and getting businesses together and saying what can we do to make us big.”

It is impossible, he said, to know what local business might invent, produce or create, “that’s going to put us on the map.” He recalled the days when Stone Brewery was just getting started. “Now look at it. But if we don’t support businesses like that we won’t have that opportunity here.”

Romo welcomed new board members: “I hope these board members realize that I’m going to call on them” for help.

Mayor McNamara added, “I echo Don’s comments that we need to use this year to strengthen our cooperation with the Chamber and the City Council. At the city we have a number of  initiatives that include SANDAG and academia. We’d like you to be partners with us as we try to move the city to the next level.”

He continued, “I agree with Don that we really need to take control the narrative of this city. We are much better in an almost any metric you want to talk about than a lot of the other cities. We’ve allowed ourselves to fall into a mindset that somehow we’re not as good as everyone else; when in fact we’re better than most and that includes our business community. I’m a big believer that businesses is the cornerstone for any successful city. I’d like I want to pledge again to do whatever I can to facilitate a good business climate. We do have our challenges but I think working as a community we can overcome them.”

He concluded, “During this COVID-19 crisis I’ve had an opportunity to go out and visit some of the businesses. It’s really been encouraging to see how they can adapt and overcome. I’ve been inundated with the ideas from business owners about how we can comply with the health guidance and still keep our businesses open.”

Then the mayor led the swearing in of the directors and ambassadors.